Battle of Waterloo in 6mm - Part 2, The Scenario

The map shows the setup of units for the Waterloo battlefield.

The units are colour-coded as follows:

Hexes with stars show locations on which reinforcements may arrive during the game.

All figures from Baccus. The village houses are from TBM, Hougoumont and La Haye Sainte from Irregular Miniatures, La Belle Alliance and Plancenoit church from Leven and Papelotte was scratch built. Trees by Timecast. 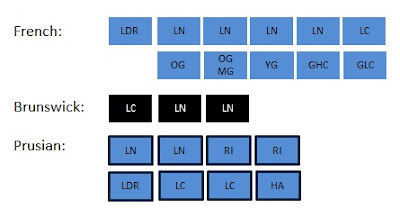 The Allied player rolls 2 dice at the start of each allied turn. For each INF symbol rolled, the timeline for the Prussian arrival increases by 1. When it reaches 8, the Prussian reinforcements may start arriving.

At the start of his turn, the Allied player may setup any ordered Prussian reinforcement and Blücher (who may attached or setup alone) in an empty hex marked with a dark blue bordered star. They may move and/or battle normally with the marked entry hex counting as first hex of movement.

Should a Prussian unit be eliminated from the game, it returns to being a reinforcement and may enter play as normal when ordered. However its loss still gives the French player a victory banner.

At the start of his turn, the French player may setup any ordered French reinforcement and Lobau (who may attached or setup alone) in an empty hex marked with a blue star. They may move and/or battle normally with the marked entry hex counting as first hex of movement.

At the start of his turn, the Allied player may setup any ordered Brunswick reinforcement in an empty hex marked with a black star. They may move and/or battle normally with the marked entry hex counting as first hex of movement.


Previous posts in this series:
Battle of Waterloo in 6mm - Part 1, The Terrain
Posted by Keith at 6:49 PM No comments:

Battle of Waterloo in 6mm - Part 1, The Terrain

As this was the 200 year jubilee we wanted to do something special. So we decided to do it on a much grander scale than a normal C&C battle. As we use Kallistra hexes it was the size of the table that determined the number of hexes we could use. This gave us 23 instead of the normal 13 hexes. We didn’t have room for a full 26 hex Epic board.

The "game board" was designed based on a combination of that from the original C&C game and MD14 by Michael Dippel together with all the Waterloo maps I could find.

The village houses are from TBM, Hougoumont and La Haye Sainte from Irregular Miniatures, La Belle Alliance and Plancenoit church from Leven and Papelotte was scratch built. Trees by Timecast. The hills from Kallistra are in my opinion a bit too rounded to hold troops well, so we made hills and ridges from polystyrene foam.

We set up the terrain and it looked like this...

I am very happy with my 1808 Spanish Napoleonic Army in 6mm from Baccus, except that they don't have any artillery limbers in their Spanish range.

I play Command & Colors Napoleonics so I need 3 bases of artillery per unit. What I usually have is two bases of guns and one of limbers or park. So I needed to use proxies to make my Spanish Napoleonic Artillery Park. 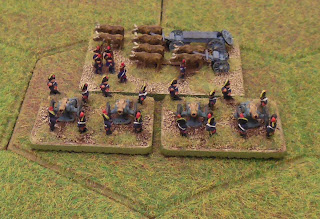 The Spanish army was extremely short of horses and would often use mules or oxen to pull their guns. So I used oxen which made it stand out from the “normal” French or British units.

The Spanish Artillery uniforms are identical to those of the Infantry (at least in 6mm) so all I needed was a different paint job. 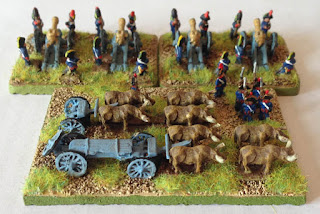 The Dungeon Tile Core Set from DMB Games was a great start to my Dungeon Crawl Project but I wanted something more. So I decide to try my hand at making some pit trap tiles.

I decided my requirement was one 2x1 tile and one 2x2 tile and that both pits should contain spikes. The idea being that I can swap out the original floor tile for one of these when the unsuspecting adventurers discover the pit.

I made the bases from 5mm foam board into which I pushed the pointy ends of cocktail sticks and then added sand. I build up the sides with a second piece of foam board.

I used a thin layer of green-stuff to build up the sides to the same height as the DMB tiles and then sculpted it to give cracked flagstone look I wanted.

Finally DMB's tiles are stylish with their felt bottoms, and I didn't want anything less, so I cut out and glued a piece of felt to the underside. 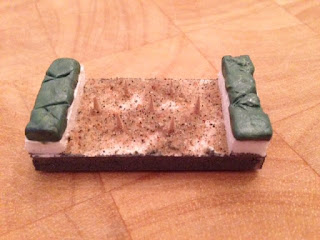 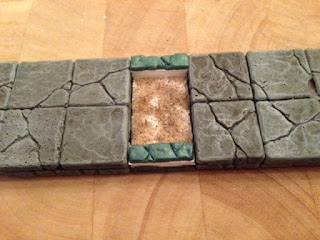 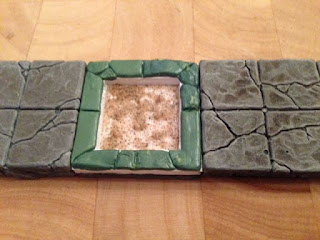 Painting was Games Workshop’s Codex Grey, a black ink wash and then a dry-brushing with a lighter shade.  The wooden stakes show up well against the grey background – I decide against painting the tips blood red. 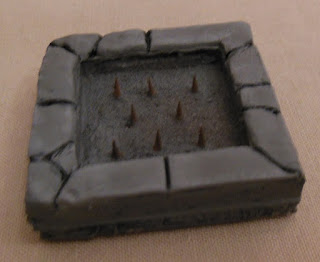 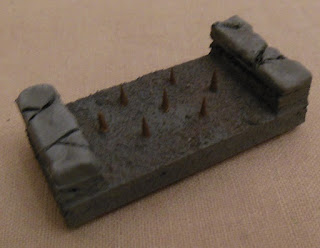 The figures, except I think perhaps the wizard, are all old Citadel models. 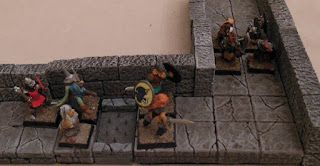 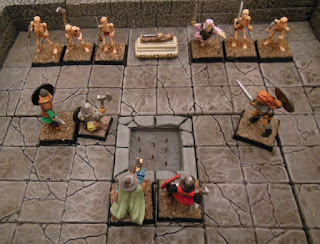 I bought a Dungeon Tile Core Set from DMB Games as the basis for my dungeon building project. I am very happy with these tiles (although I'm sure I'm going to need more). There's still lots of work to do filling the dungeon with monsters and "furniture" before I am anywhere near happy with it. However, it was now time for the first band of heroic adventurers to  explore.

The dwarves are old Citadel models. Not sure what the monster they discovered is, and by the look on the dwarves' faces neither do they - perhaps an old Citadel ogre? 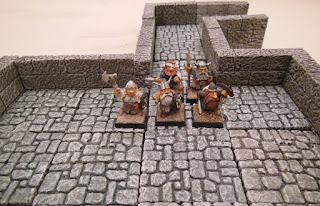 The brave band of dwarves enter the dungeon. 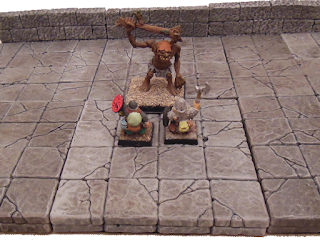 The dungeon is full with nasty surprises!

Battle of Bailén in 6mm 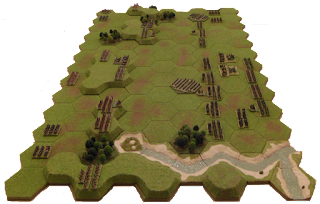 The setup. Spanish to the left, French to the right.

The Spanish infantry routed, and the artillery taken in the flank.