The party had just reached fifth level and were busy practising their new skills. Gimlit, Wildbladder and Belwina were out the back of the King's Road Inn, sparring with each other and shooting at targets. Kranoval was researching new spells and Bathenwells was preying a lot. Kobbe took his newly acquired leather purse, now filled with coppers, to the bazaar where he treated himself to tarts (the fruity kind); he was often accompanied by Fido for whom he purchased marrow bones from the butcher's. Frito has disappeared, nobody was sure where, returning in the evenings when it was time to eat and drink.

After a feast with far too much strong wine, the party retired to their rooms in the King's Road Inn. They lapsed into a drunken slumber, all except Kranoval who decided to try another possible spell. However this spell misfired, the top floor of the Inn was filled with an oily blue mist, and one second later the entire party (except for their pony and the treasure they'd left in the Inn's strong room) were transported somewhere else.

The oily blue mist cleared and the party found themselves outdoors, in a wood and standing just in front of a cave entrance. The party sent in Frito to investigate and he reported an empty cave that was surprisingly warm. The party entered and when the came to the end of the 100ft long cave they found a sinkhole.

The sinkhole dropped down over 200ft to a small geothermal pool. The green sulphur-rich pool bubbled giving off noxious gasses. A rope ladder descended part way down the sinkhole, terminating at a small passageway. Deeper down, a rope bridge crossed the sinkhole between two other passageways.

Frito and Kobbe descended the rope ladder to investigate the small passageway. 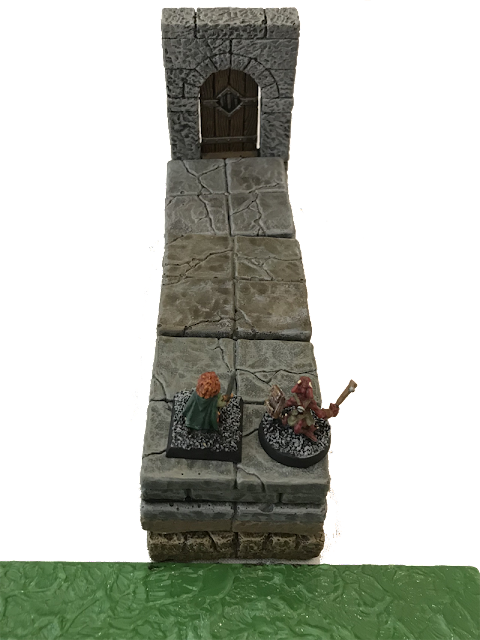 When the signalled all clear, the rest of the party descended. Checking for traps, Frito discovered that he was standing on one. A pit trap that was activated when someone of a certain weight stood on it. Luckily Frito and Kobbe were the lightest members of the party and without heavy armour.

When Frito pointed it out, Kobbe declared that it was very probably made by Kobolds. Frito tried to disable the trap and was certain he succeeded. 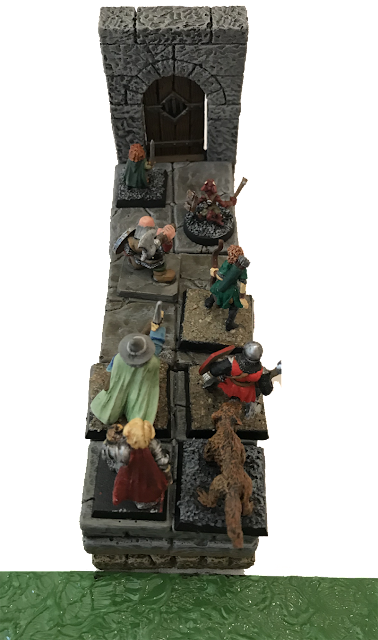 There was a somewhat noisy discussion among the party members which alerted the Kobolds in the room behind the door. The door flew open and the Kobolds started shooting sling shot at the party. Frito quickly retired and Gimlit charged forward. Unfortunately Frito had not disarmed the trap, and Gimlit's weight caused the pit to open and he and Kobbe fell in onto the poisoned spikes. 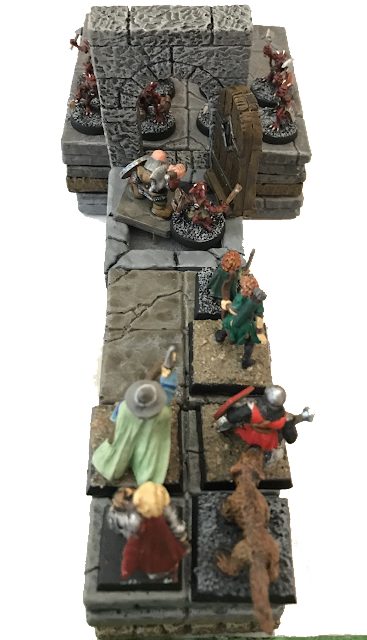 The Bishop of Bathenwells charged into the fray, leapt the pit, but missed his footing and landed on the spikes in the bottom. The somewhat more dexterous Belwina and Fido then charged the Kobolds. As the fight progressed, two Stirges swooped in from the sinkhole and attacked Kranoval and Wildbladder from behind. 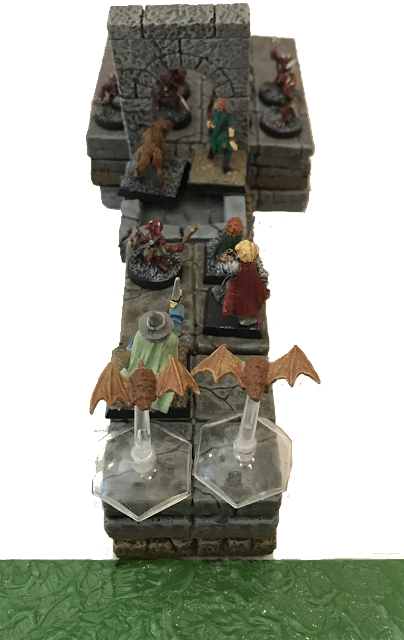 Having defeated the Kobold guardroom, the party continued out the room's other door. They went down the stairs, still with Frito and Kobbe in the lead looking for traps. They found a pressure plate on the floor which would have shot out darts when anyone heavier than a Kobold passed. Warned by Frito, the party crept past safely.

The Party turned a corner and entered a large hall. they noticed that the room was much bigger and the ceiling much higher than normal for Kobolds. The room contained 12 Kobolds. Melee occurred and the Kobolds defeated. The room contained two exit doors, one to the right and one to the left. Having worked out that the door to the right led to the rope bridge over the green geothermal pool, the party opted for that door, ignoring the door to the left and whatever treasure that might have contained. 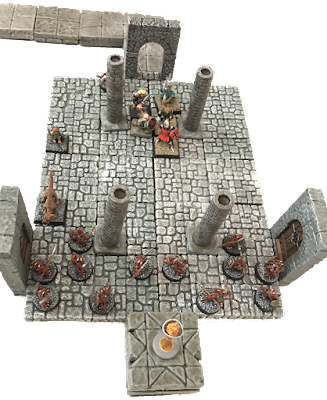 Still remembering to check for traps made by the Kobolds, Frito and Kobbe found a pit trap full with oil. Kobbe and Fido crossed safely but Frito fell in. The two Kobolds guarding the trap attacked Kobbe and Fido but when the rest of the party joined in the two Kobolds fled to warn their comrades. 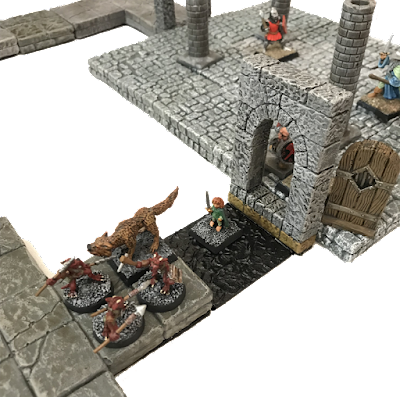 The party came to the rope bridge over the green geothermal pool as they had predicted. 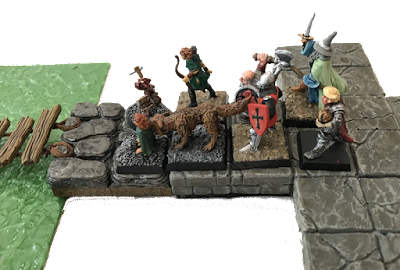 Kobbe was persuaded to cross the bridge, but was ambushed by the forewarned Kobolds. Kobbe turned and fled but was cut down by a hail of slingshot.

Angered by the death of Kobbe, the party charged. Fido running much faster than the heavily armoured Gimlit and Bathenwells was surrounded by Kobolds. Fido killed one Kobld directly, but the other seven killed him before support could arrive.

The Kobold leaders came to assist in the fight. There was their Commander wielding a magic axe, a powerful Shaman, a whip wielding Hero with a ring of Magic Missile and two beefy Guards.

The Shaman started by casting a fire ball which hit most of the party and burning Fido and Kobbe to a crisp. The Commander attacked Wildbladder and the Hero fired his Magic Missile at Kranoval. 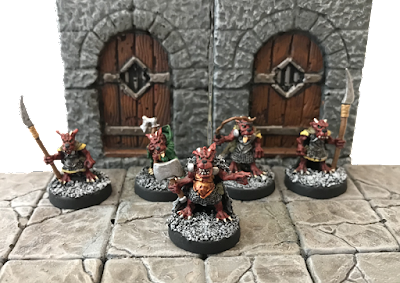 As the combat progressed, the Fire Drake who the Kobolds were serving burst through the double doors and attacked the party. Flame shot out from the Fire Drake's nostrils scorching half the party. 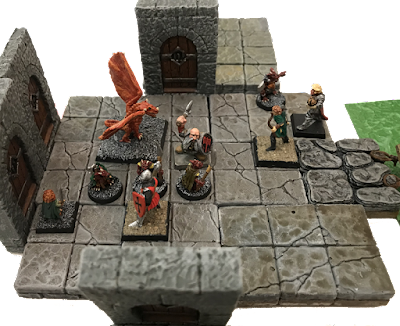 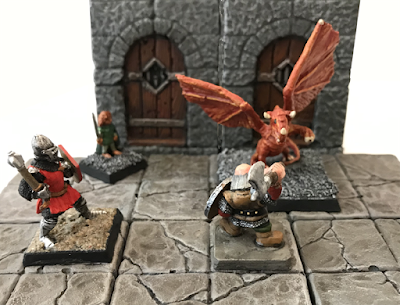 Behind the double doors the party found a pile of treasure on which the Fire Drake lived and five chests belonging to the five Kobold leaders. Frito examined the five chests and determined that one was trapped. Frito opened the other four but couldn't disarm the fifth. So Gimlit took his axe and opened the back of the chest, luckily it didn't contain anything fragile, but the blast left a somewhat singed Gimlit.

On the way out, the party finally remembered to search the the Kobold leaders and looted the Commander's magic axe and the Hero's magic ring.

The party returned to the cave where they rested.
Posted by Keith at 9:27 AM 1 comment:

I have made a couple of "water features" for my Dungeon Crawl Project for which I have been using floor tiles from DMB Games.

I bought a rope bridge from DMB Games at Salute and have now made a Green Pool Of Doom over which it will span:

I also made a water (or oil) filled pit trap. Here I lay out a normal 2 square wide passageway and then replace one of the 2x2 tiles with this piece when the trap opens:

Both water features were made from plasticard. The plasticard was painted the desired colour, in this case Snot Green and Black. They were then covered with Liquitex Gloss Heavy Gel Medium. For the Green Pool I used the Gel straight out of the pot. For the Pit Trap I mixed in two drops of black ink and two of brown. (It works great mixing acrylic inks or paints into the Gel).
Posted by Keith at 6:27 PM No comments: