Just finished painting my Viking shieldmaiden command group (Svala, Inga & Brynhildr) over Christmas. Now my warband is complete, at least until I decide to add some mounted, or until Annie tempts me with something else. All figures from Bad Squiddo Games. 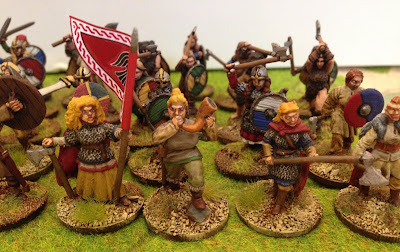 Battle of the Medellín in 6mm

General Don Gregorio Garcia de la Cuesta’s army was retreating in the face of Victor’s advance after being forced out of its defensive positions on the Tagus River. On the 27th of March, Cuesta’s army was reinforced by the Duke of Albuquerque, and Cuesta decided it was time to fight. The battlefield was just southeast of the town of Medellín, roughly 300 km southwest of Madrid. Cuesta’s plan was to strike both French wings and hope to catch the French army with their backs to the Guadiana River.

Victor was outnumbered, but had veteran troops who knew how to win, so he willingly deployed for battle. Victor’s plan was to keep withdrawing his flanks closer and closer to the centre until a powerful counter-attack could shatter the Spanish line. Cuesta formed his infantry into one long, thin unbroken line since his greatest fear was that French cavalry could destroy his infantry if there were gaps in the line.

At first, Cuesta’s plan seemed to be working. Lasalle’s position on the French left was at risk, but his men held on to their tenuous positions. Spanish infantry formations were also pushing forward against the French batteries on Latour-Maubourg’s hill position. Latour-Maubourg flung his cavalry into a counter attack, but the cavalry was forced into a disorganised retreat. As the Spanish infantry threatened to capture the French guns, Latour-Maubourg ordered his reformed cavalry to attack again – this time against the Spanish cavalry covering the end of the infantry line. Events now unfolded quickly. The French cavalry charge succeeded and the Spanish cavalry fled the field, exposing the thin Spanish line to a devastating flank attack. Cuesta’s left flank dissolved in panic. Lasalle and Villatte, seeing the opportunity, ordered a counter-attack that caught the right flank of the Spanish army between infantry to their front and cavalry to their flanks and rear. The result was a massacre. Entire battalions were destroyed as they tried to stand and fight, and the French cavalry showed no quarter in their pursuit of fugitives.

Over 7,500 Spaniards became casualties. In the aftermath, Cuesta’s shattered army retreated to Monasterio. 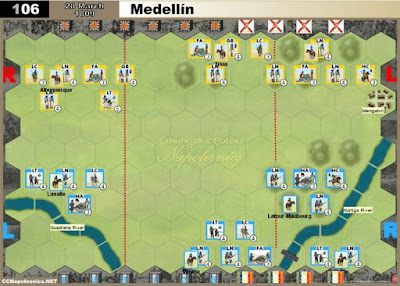 The Spanish infantry were hastily recruited and poorly trained. The first time a Spanish unit tries to form square it must roll 3+ on a D6 in order to succeed. Each successive time the score needed increases by 1. The fourth and subsequent attempts will only succeed on a 6.

The battle started in a historical manner, with the Spanish right wing attacking General Lasalle on the French left in the hope of trapping his troops against the Guadiana River. 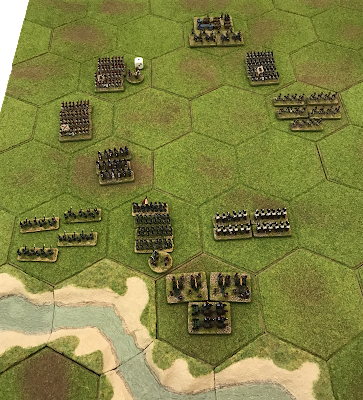 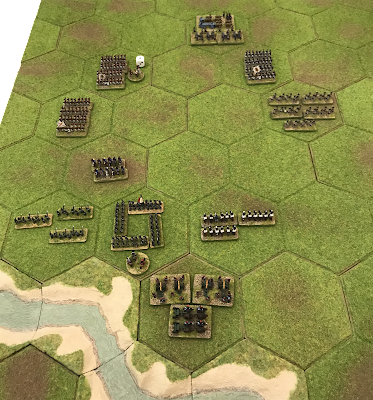 To save their infantry, the French hussars then charged the Spanish hussars. 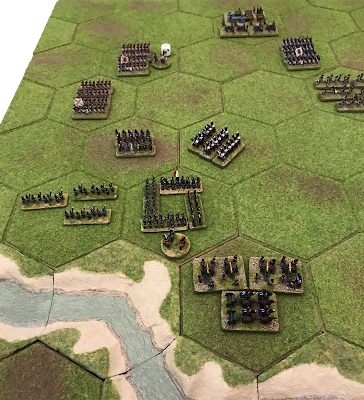 The Spanish hussars were defeated and the victorious French hussars then charged into the Spanish infantry behind, which took 50% casualties and then fled. 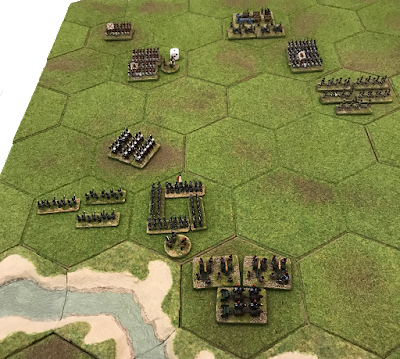 The three remaining Spanish infantry units then advanced on the French, still hoping to push them back into the river. 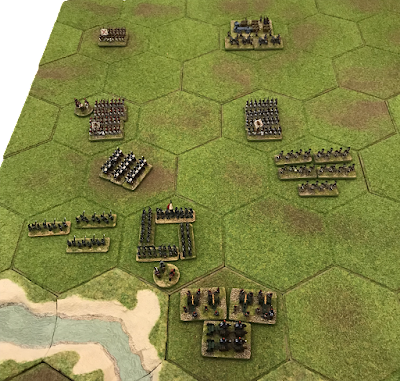 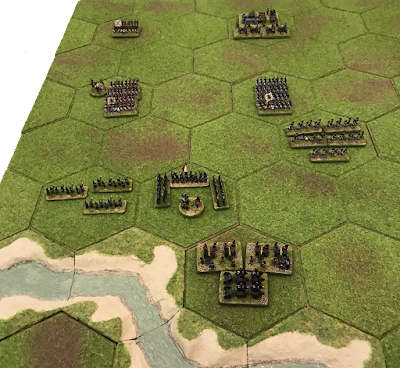 The Spanish followed up there attack with a second, giving the French no chance to counterattack (Spanish Guerrilla Action Rule). They massacred the square, but Lasalle managed to flee to the safety of his supporting Horse Artillery. Even the French light infantry took heavy casualties. 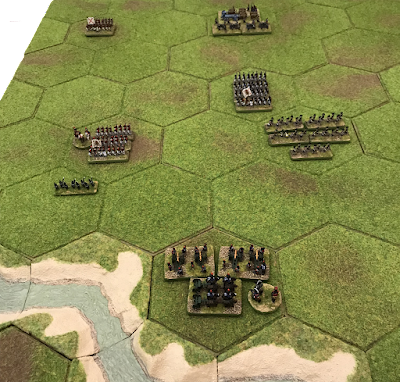 Lasalle retreated with his Horse Artillery leaving the light infantry to their fate. 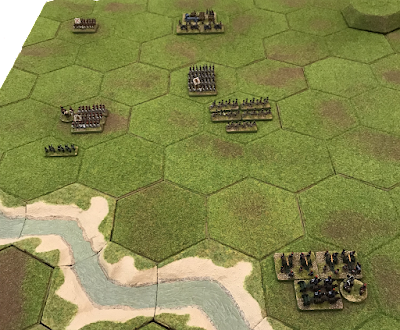 A fate which was soon in coming, they were destroyed by the advancing Spanish infantry column. 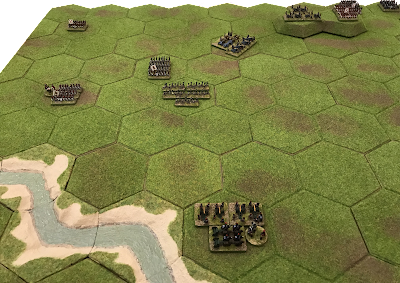 Luckily for the French, General Latour-Maubourg had brought is cavalry to support the left flank. 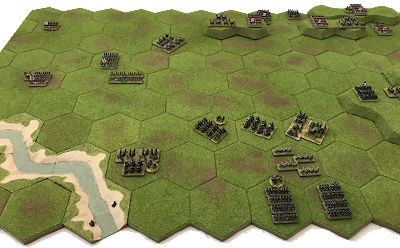 This caused the Spanish to retire and try and form a defensive line and gave the French the chance to bring up even more reinforcements. 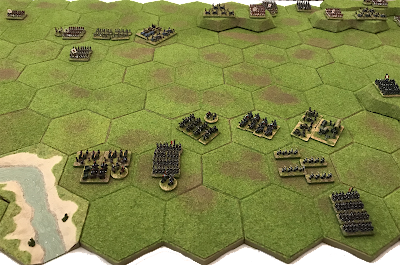 The French then advanced towards the waiting Spanish line. 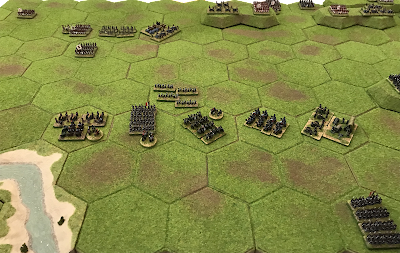 Latour-Maubourg charged with his cavalry, supported by the advancing infantry. 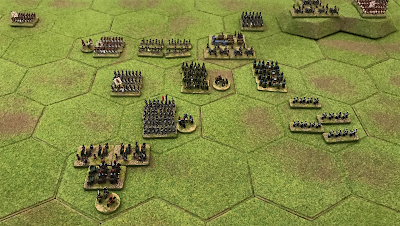 The charging French hussars were repulsed with losses by the stubborn Spanish artillery, but the following charge by the French dragoons wiped out the artillery. The dragoons then continued to charge right into the Spanish infantry behind. The infantry didn't form square and were in turn massacred by the dragoons. 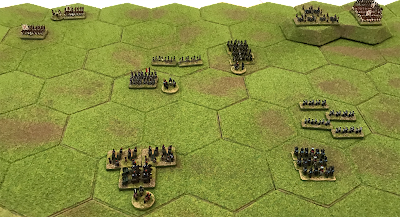 Latour-Maubourg and his dragoons charged into the Spanish artillery on the hill.

The artillery were destroyed and then the supporting infantry advanced on the French dragoons. The infantry opened fire on the dragoons but with causing and noticeable losses. 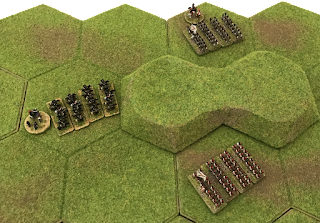 The dragoons then charged the Spanish infantry, who yet again chose not to form square. The infantry were slaughtered and the dragoons charged through them and up onto the hill behind. 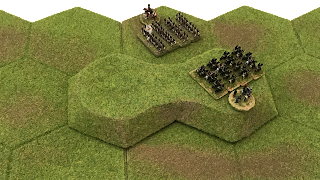 Seeing both their left wing and centre being wiped out by the French, the Spanish army started to slip away heading back into the safety of the mountain ranges.

The victorious General Latour-Maubourg and his dragoons. 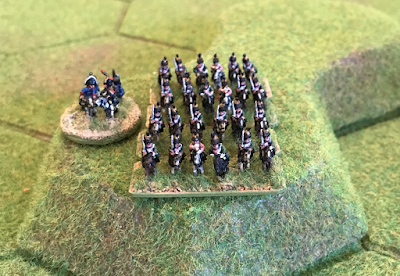