The Peninsular War (1807–1814) was fought in the Iberian Peninsula by Spain, Portugal, and the United Kingdom against the invading and occupying forces of France during the Napoleonic Wars. Starting with the invasion of Portugal in 1807, it escalated in 1808 after Napoleonic France occupied Spain, which had been its ally. Napoleon forced the abdications of Ferdinand VII and his father Charles IV and then installed his brother Joseph Bonaparte on the Spanish throne.

This campaign is made up of the scenarios from the Base Game and Expansion 1 from 1808 until 1814 which are played in historical sequence. One player takes the French and one the Allies. The player who has amassed the greater number of Victory Banners after all scenarios have been played is the winner. It is possible for a player to amass glory in one battle and then use it to affect the following battle.

If you have an unusable Command Card, you may do one of the following two things.

Unless specified otherwise by the scenario, all British (but not KGL or allied nations) cavalry are impetuous.

Note: British cavalry were known to be difficult to control once victorious. The 1 extra battle die makes them as good as their French equivalent which always start the scenario with one more block.

Note: Cavalry needed time to reform after leaving bad terrain. This stops cavalry from "hiding" in bad terrain and then charging out unhindered at full strength.

Note: These facing rules are primarily intended to stop artillery from having an all-round field of fire and changing the retreat rules so that scenarios such as 501 Sahagun seem more logical.

Units should be placed in the hex so as to face a vertex of the hex (one of the points). The front two sides of the hex are then the unit’s front-facing, the back two its rear facing and the side two its flank facing. The unit's facing can affect how the unit may battle, retreat or retire. Unattached leaders do not have facing. 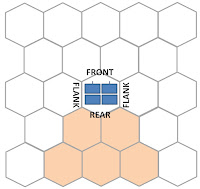 Units that only change facing are not considered to have moved.

Units which move into contact with an enemy unit must do so with one of their front facings.

Units which move into contact with two or more enemy units must do so with at least one of their front facings and, if possible, both.

When performing ranged combat, the two hexes to an artillery unit’s rear block its line-of-sight.

An artillery unit resolving melee combat into a hex to its rear, reduces the number of battle dice rolled by 1.

A unit attacked from a hex to its rear may not play the First Strike card.

A unit will retreat through its rear facing instead of towards its own side of the battlefield. Retreating units may not change facing.

An unattached leader’s retreat movement is through the three hexsides furthest away from the attacker.

A cavalry unit will retire through its rear facing instead of towards its own side of the battlefield. Retiring units may not change facing.

When British or French infantry unit other than Militia, Light or Rifle is eliminated in melee combat, the victor should attempt to capture its eagle or colour. To be eligible, the victor must take ground.

Roll 2 dice, on a result of two Flags then the trophy has been captured.

For the remainder of the scenario, a unit that captures a trophy

Note: British and French trophies are more valuable than Spanish or Portuguese. Most scenarios will have approximately 12 units lost. Some of these will not have trophies. There is a 1 in 36 chance of capturing a trophy. This means that on average one trophy will be captured every 4 or 5 scenarios. The idea is that capturing a trophy will “upgrade” a unit to grenadier status; e.g. guards and grenadiers will not be improved.

When a leader casualty check in melee combat results in a Spanish Leader being hit, the French commander should attempt to capture the Spanish General.

Roll 2 dice, if either is a Flag then the general has been captured.

Note: Throughout the Peninsular War, a surprising number of Spanish generals were captured.

Glory counters are awarded at the end of each scenario.

The losing side gains one Glory Counter.

If the losing side fails to get at least half the required number of Victory Banners, the winning side gets an additional Glory Counter.

One additional Glory Counter is awarded for each British or French trophy captured.

One additional Glory Counter is awarded for each Spanish General captured.

Glory Counters awarded in one scenario can be spent in the following battle in the campaign in a number of different ways. Glory Counters left unused at the end of a scenario are lost and will not be carried over. Glory counters may not affect the same unit more than once in the same turn.

A Glory Counter can be spent at the start of the turn immediately prior to playing a Command Card in order to discard one card from the player’s hand and draw a replacement.

A Glory Counter can be spent at the start of the turn immediately after playing a Command Card in order to make a unit heroic. For this turn, the unit will melee with 1 extra battle die. Artillery units may not be heroic.

A Glory Counter can be spent at the start of the turn immediately after playing a Command Card in order to additionally order a leader, but not any attached unit.

Only used in scenarios where the Spanish Guerrilla Action rule is in effect.
The Spanish player may exchange one Glory Counter for a Guerrilla Counter.