A Fantasy Adventure – Act 10a.

This is the first instalment of a fantasy dungeon crawl using dungeon tiles from DMB Games, map tiles from Red Dragon Gaming and the Swords and Wizardry “Old School D&D” rules.

Now fully rested, the party left the cave. The ranger Belwina's sense of direction told her the way back to town, so the party headed off behind her. After midday the party entered a wooded valley, following a track down the middle of the valley.

As the sun was about to set, the party noticed a gap in the trees to the north and upon closer inspection found a pathway leading into the woods which was flanked by two monoliths of white marble worked with silver inlayed glyphs and holy symbols. The pathway and the obelisks were overgrown and covered by trees and shrubs.

Deciding that it was about time to camp for the night, and not wanting to do so in the open, the party followed the path into the woods with Belwina and Kranoval in the lead. 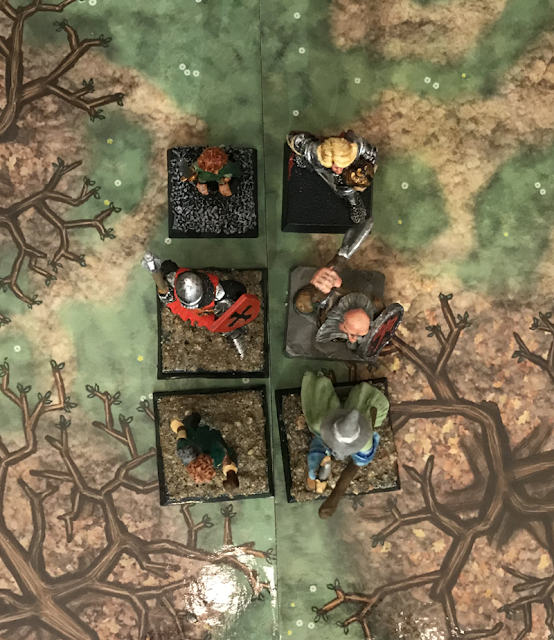 After a few hundred paces into to woods, the party was ambushed by two giant spiders. The ambush didn't surprise the ranger and she got of a shot with her bow before the spiders attacked. They party dealt with the spiders fairly easily, although the spiders managed to wound a couple of party members. 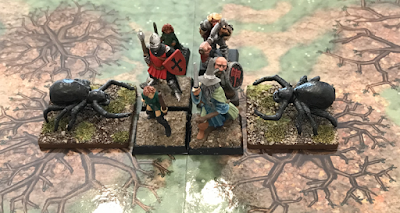 The party continued along the path which ended at a cliff face in which an archway had been carved, flanked by two monoliths.

The monoliths were once white marble worked with silver inlayed glyphs and holy symbols. They have been desecrated and blackened by fire. The top has been knocked off each of the monoliths, and the inlaid symbols have been rudely chipped away.

The archway itself was once made of white marble and covered with holy symbols. It, too, had been defiled and now bears evil symbols written in what appears to be charcoal or blood. The runes and symbols appear to have been placed recently. The Bishop of Bathenwells believes that the symbols on the archway are linked to the demon prince Orcus. 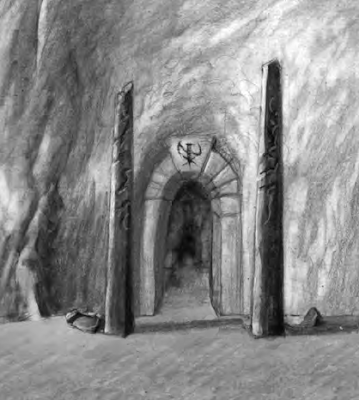 The party entered through the archway which opened to a small room with a hallway leading out the opposite side. The saw a pair of basins on each wall. These are now empty and defiled with evil symbols. 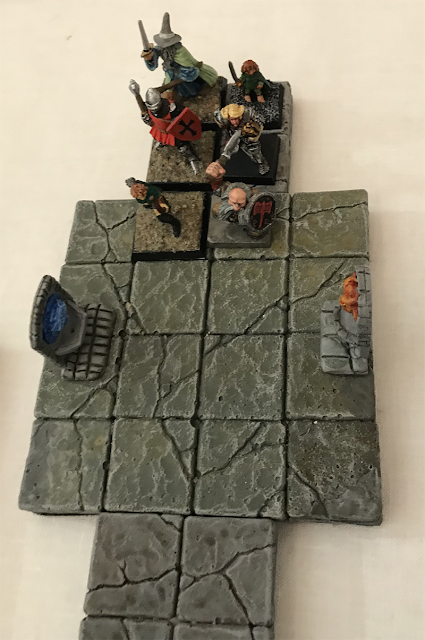 On passing the basins, the Bishop of Bathenwells paused to examine them. He believes that they were once used to dispense Holy Water and that this is the entrance way to a holy building, perhaps a temple or burial hall. 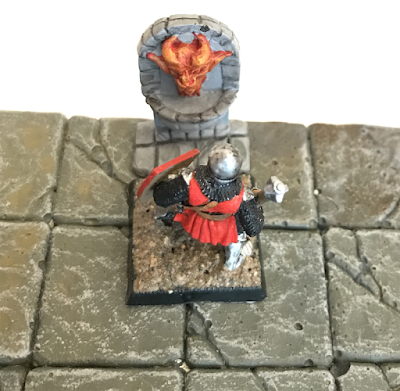 The party continued down the passageway. There was a room to their right which Frito investigated. He found nothing except that the walls were again covered with evil symbols.

The Bishop pointed out, that if his theory that this was a holy building, then this chamber was once a room for the priest who would welcome visitors.

Gimlit's knowledge of stonework enabled him to notice a secret door in the left hand wall. 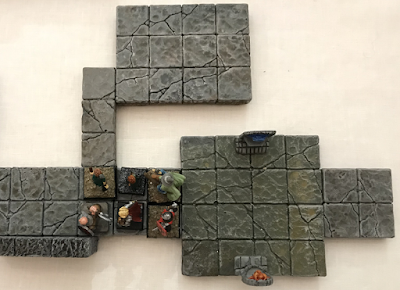 The secret door was rather easy to detect because of its obvious seam, though the mechanism to open it was harder. Gimlit searched the stonework and found that the opening mechanism was a small stone to the right of the door that, when pressed. opens the door. Several of the runes on the surface of the secret door appeared to overlap the outline of the door.

With Wildbladder and Belwina giving support, Gimlit opened the secret door. Opening the secret door violated the integrity of two of the runes. One of the runes exploded shooting burning flames onto everyone in the corridor in front of the door. 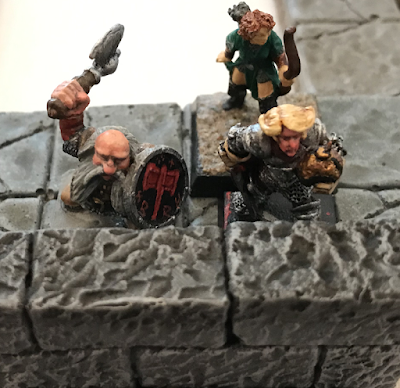 At the same time as the secret door was opened, skeletons started to appear in the next room. 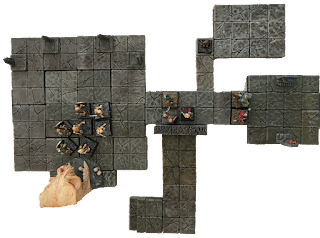 Gimlit threw down his Jade Bulldog Statue, which turned into a living bulldog. Gimlit ordered it to attack the skeletons. Unfortunately for Gimlit, the bulldog was quickly slain by the skeletons. 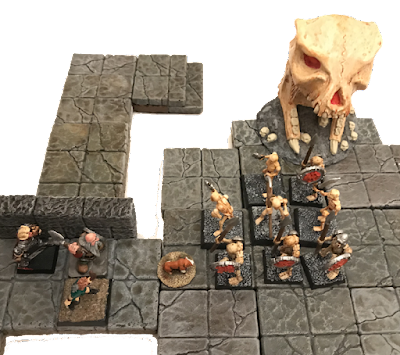 Even the walls of this chamber were defiled with unholy symbols, not just the cleric and the paladin, but the whole party, could feel the evil of the place.

The Bishop of Bathenwells elbowed his way to the front of the party, he pulled out his Holy Symbol and cried out "Flee before the power of LAW, foul undead thing of Chaos!". All except two of the skeletons were immediately dissipated.

Dealing with skeletons should no longer have been a problem for Bathenwells, but in this evil place it was much more difficult to turn undead. 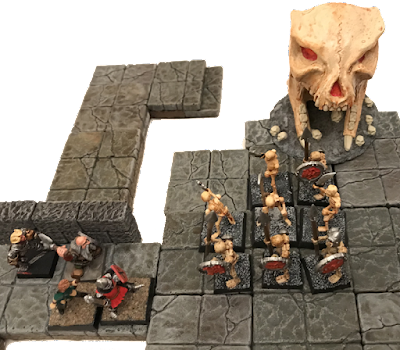 The party rushed in to kill the two remaining skeletons. This took more time than expected, and the skull started spewing out more skeletons - four at a time - at regular intervals. A prolonged fight occurred.

Kranoval was in trouble, attacked by two skeletons. Once of them was just about to hack down Kranoval from the side when the second skeleton speared his comrade by mistake. Kranoval dispatched the remaining skeleton with a powerful blow from his staff. But still more skeletons spewed forth from the skull. 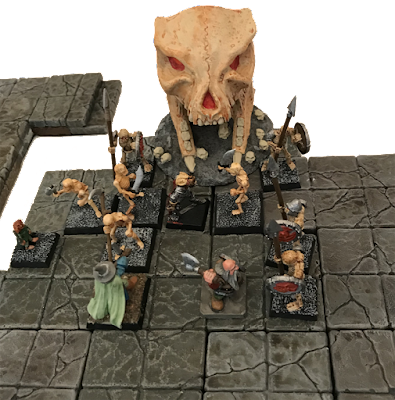 The Bishop of Bathenwells came up with the idea that the secret passage was the solution to why the skull spewed out skeletons. He and Belwina rushed down the passage, only to fall into a 30ft deep pit trap.

They attempted to climb out, but before they could reach the top, the pit closed again. 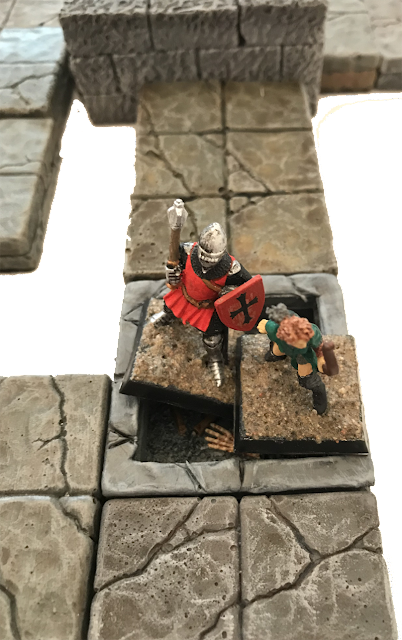 Frito and Kranoval rushed to the aid of their friends in the pit, leaving poor Gimlit and Wildbladder to face all the skeletons. 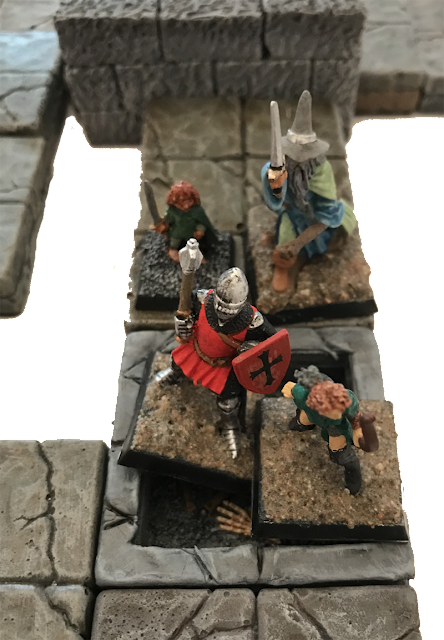 Kranoval used his knock spell to open the trap, then Frito threw down a rope and they together pulled up their comrades. 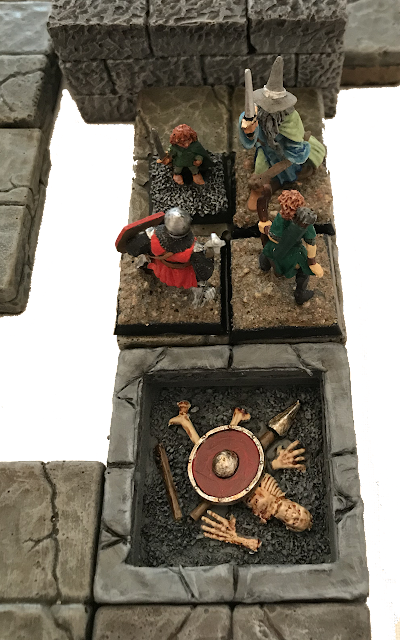 Wildbladder and Gimlit were still fighting the never ending stream of skeletons. A cunning blow from one skeleton knocked Wildbladder unconscious and Gimlit alone was left to hold off the skeleton horde. 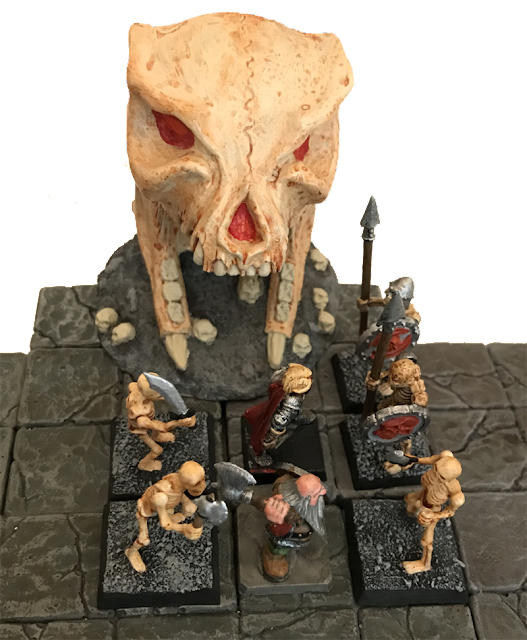 Having been pulled out of the pit trap somewhat dented, the Bishop of Bathenwells rushed back to the skull chamber, he once again pulled forth his Holy Symbol and yet again cried out "Flee before the power of LAW, foul undead thing of Chaos!".

The few remaining skeletons, that Gimlit hadn't smashed to pieces, were dissipated in a flash.

Gimlet picked up Wildbladder's body and carried it out of the chamber. The party retied to the priest's welcome room and healed Wildbladder.

They chose to camped there for the night, as they that it was safer to camp in the chaos-defiled room that outside where there might be more spiders.