The Roman Invasion of Britain - Scenario 1

Invasion of Britain (55 BC)

This is the first scenario in our campaign representing the Roman Invasion of Britain based on my own campaign rules.

With most of Gaul under his control, Caesar saw a need to pacify the nearby British coast, lest this island serve as a sanctuary and base for anti-Roman Gauls. Caesar sailed to Britain late in the campaign season with two legions (Legio VII and Legio X) in a fleet of eighty transport ships.

The intended landing sight, above the cliffs of Dover, was lined with Britons, which forced Caesar to sail further north-east following the coast to an open beach. 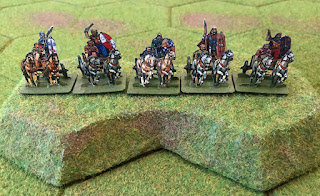 Having been followed all the way by the Britons, the landing was opposed. To make matters worse, the loaded Roman ships were too low in the water to go close inshore and the heavily laden Roman troops had to disembark in deep water and wading ashore, all the while attacked by the enemy from the shallows.

The troops were reluctant, but  were led by the aquilifer of the Legio X who jumped in first as an example, shouting: "Leap, fellow soldiers, unless you wish to betray your eagle to the enemy. I, for my part, will perform my duty to the republic and to my general."

Note: This is scenario 217 from Commands & Colors Ancients - Expansion 2. Statistics show that the Romans have a 73% chance of winning this scenario, therefore the number of Roman command cards is reduced from their "normal" 6 to 5, this due to difficult nature of an opposed amphibious operation.

The battle started with the 10th Legion ashore, leading the charge.

The view from the British ranks was worrying, the Romans were ashore with 5 units of legionaries and even more troops were jumping out of their ships into the water.

Tinpotarus, the British chieftain, decided to attack the Romans before they could get any more troops ashore. He ordered his line to advance and the infantry moved forward leaving the cavalry and chariots behind.

With a band of seasoned warriors in the middle, flanked on both sides by younger less experienced troops, he charged straight at the 10th Legion. 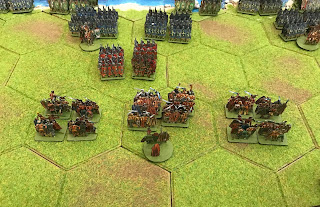 The British started the combat by throwing javelins and followed this up with a charge from their younger troops which caused some casualties among the Romans but caused more casualties among the Britons, forcing them to break off and retreat. This was followed up by a charge of the seasoned warriors which wiped out the Roman unit. The Britons charged forward in an attempt to capture the Roman eagle but without success.

Continuing the charge, the warriors attacked the second line of legionaries, this time under the command of Julius Caesar himself, causing serious casualties with no loss to themselves. 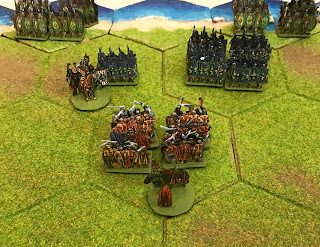 Julius Caesar ordered the two legionary units in the centre to attack the British warriors. The powerful Roman legions wiped out the lone British warrior unit causing their leader, Tinpotarus, to retreat back to his other troops in the rear. The Romans had a chance to capture the British boar standard, but Caesar ordered his troops to hold their ground and not to advance after the retreating Britons.

Seeing that the sacrifice of his warriors had weakened the Roman centre, the British chieftain ordered a mounted charge.

On the left flank, the chariots supported by some light cavalry charged at the light infantry unit on Caesar's flank, hoping to push them back into the sea.

The charge wiped out both units of Roman legionaries and Julius Caesar had to take refuge in a unit of Auxilia to his rear in order to evade capture by the British charioteers. One unit of British cavalry fled far to their rear. 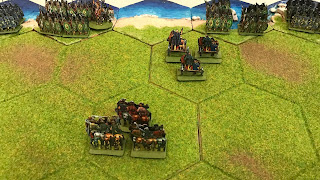 The chariots retreated without loss, the light horse evaded (four hexes instead of two!) loosing half their remaining strength.

The British chieftain then sent orders to his light troops. The light chariots on his right flank tried yet again to push the Roman light infantry back into the sea but without effect. Those light troops in range, threw their javelins at the Romans and other light troops moved forward in an attempt to build a defensive line. 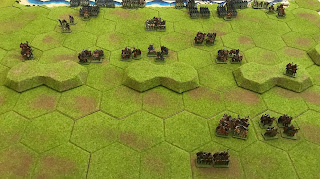 Julius Caesar now inspired his troops and three units of legionaries and one of Auxilia followed, advancing onto firm land and causing the British cavalry to evade.

Unsure how to handle these advancing Romans, the British commander sent orders to his troops to darken the skies with their javelins and kill the advancing Romans. Fortunately for the Romans, this did not have the expected success.

The Roman leaders then ordered their infantry to double-time and hit the British defensive line.

Gnaeus Hostilius, the Roman legate on their right flank, knowing he was attacking under the watchful eye of Julius Caesar himself, hit the British hard, destroying first one infantry unit and then a second. 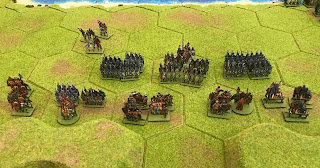 As the second British unit was destroyed, their chieftain, Tinpotarus, fled over the hill leaving behind the Boar Standard to be captured by the exuberant Romans. The Boar standard was presented there and then on the battlefield to the legate, Gnaeus Hostilius, by the unit's Primus pilus. 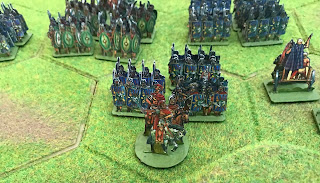 Somewhat shocked by the Roman attack, the British chieftain ordered three units from his centre to attack an understrength unit of legionaries on the Roman right. This unit had earlier taken casualties from javelins being thrown.

The legionaries killed and their commander retreated to the safety of another Roman unit to their rear. The British decided to hold their line rather than follow up. 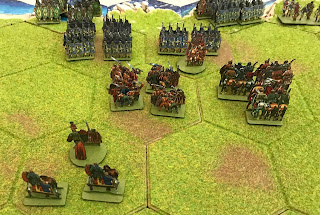 The Roman commander decided to counterattack. He sent one unit of legionaries to attack the British chariots in the flank and another two units, one legionary and one Auxilia to attack frontally.

The chariots evaded the attack but lost half their number when doing so. The frontal attack caused many casualties to the British infantry but also to the attacking Romans. The British cavalry were unscathed. 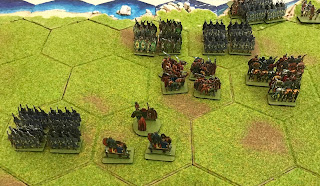 The British chieftain decided to try a coordinated attack and moved to join the cavalry which he ordered to attack the understrength Roman legionaries to their front.

Having overrun the understrength legionaries, the cavalry bypassed the full strength legionaries and attacked the Roman light infantry which had been skirmishing with the British chariots. They were successfully pushed back into the sea.

Ignoring the battle on his left flank, Caesar ordered his four units in the to advance. These were ignored by the British commander who instead ordered one unit of infantry to double-time towards the battle on his right, where they attacked the under-strength Roman Auxilia. 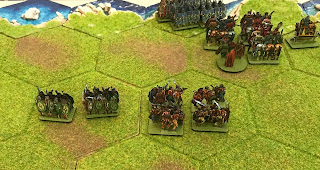 The Auxilia lost half their strength and retreated towards the beach.

Caesar then ordered his light troops to move towards the enemy unless in range, open fire and then for the Auxilia to move away. The fire had little effect.

Tinpotarus, then ordered his medium units and the cavalry charged the fleeing Auxilia wiping them out and thus winning the scenario. 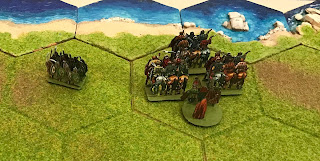 The British cavalry rejoiced their victory! 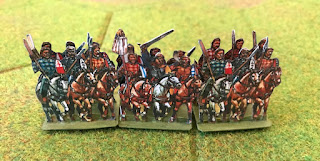 Julius Caesar's first expedition to Britain in 55 BC was un-historically pushed back into the sea by the British chieftain Tinpotarus. But Caesar will return in 54 BC and the Roman Invasion of Britain will continue!

Having left Britain, and now on the "friendly" shores of Gaul, Julius Caesar honoured the bravery of legate Gnaeus Hostilius by now naming him Gnaeus Hostilius Aper; who paraded the captured Boar Standard in front of the legions.