This is the seventh episode of a campaign representing fictitious battles in the air over the Western Front during the First World War. It was initially planned to use the Wings of Glory rules, but these were modified to use hex based movement in order to facilitate remote play over the Internet due to Corona restrictions.

Before dawn, Corporal Boyd went into the officers’ quarters and woke up Captain Jack Yates and then St John Featherstonehaugh. The pilots jumped out of bed, dressed and went to the mess expecting a hearty breakfast before taking off at the first light of dawn.

Upon entering the mess, they saw the French inspecteur général Hippolyte St Prix sitting at the large dining table. “Good moaning” said St Prix, in way of greeting “please sit down, I have ordered breakfast for you”. The pilots sat down and a French waiter, as opposed to the usual British cook, entered the room. He placed a small thimble sized cup of black coffee in front of each of the pilots followed by plate with a bite-sized croissant. This is the perfect meal before a dawn patrol explained St Prix.

As Yates and Featherstonehaugh walked out to their Sopwith Snipes, they wondered what had happened to Major Brackton. He had flown off in search of the County of Dampshire infantry regiment and the missing beer, but had yet to return. “We must get him back”, said Yates, “this squadron is going to the dogs, French dogs!”  Featherstonehaugh agreed, “I really miss the bacon and eggs, and who in their right mind drinks coffee for breakfast, I need a good cuppa to set me up for the day”. Corporal Boyd and his erks had finished preparing the Snipes, so Yates and Featherstonehaugh took off with the ground in darkness, just as the sky was beginning to brighten.

The two Sopwith Snipes climbed to 15,500 ft and headed towards the trench lines. 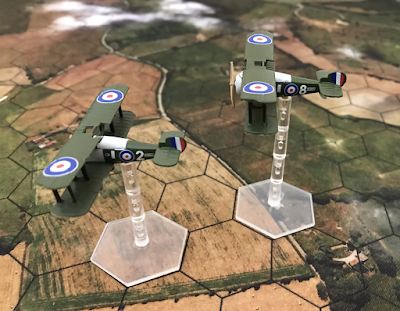 Meanwhile at another aerodrome, not that far away, Udo Lockbach and Florian Meier were sitting down to a breakfast of bratwurst served with curry sauce, pommes frites and a crispy bread roll. “Delicious”, said Meier, “when I get home to Berlin I could start a restaurant that only serves currywurst”. After their hearty breakfast, Lockbach and Meier walked out to the hanger where their Fokker D.VII’s were ready to go. After a quick briefing by the squadron commander Major Fritz Detterman, they took off for their dawn patrol.

The two Fokker D.VII's climbed to 15,000 ft and headed for the trench lines. 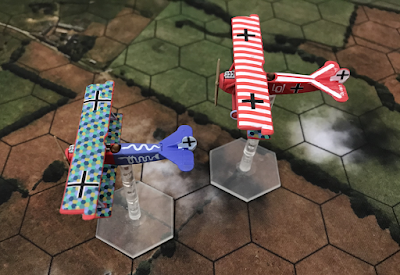 Captain Jack Yates spotted the two Fokkers and was pleased that he had a height advantage and that he had the sun behind him. He waggled his wings causing Featherstonehaugh to wake up from his daydream about the toast and bacon he didn't get for breakfast. 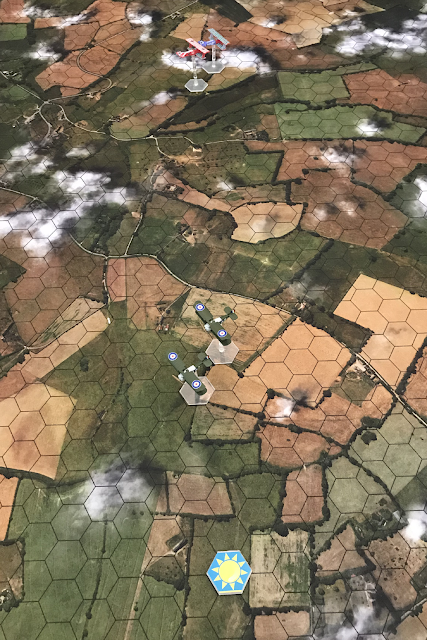 All four aircraft turned right, to close with the enemy. 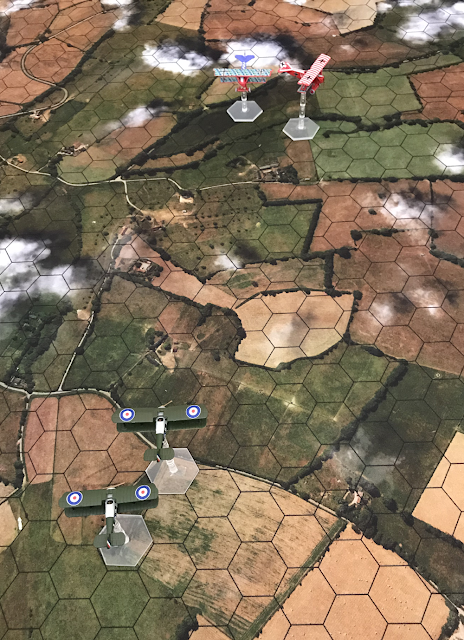 The Snipes headed towards the D.VII's with Featherstonehaugh leading Yates.

Florien Meier in the striped D.VII near got in a burst of machine-gun fire, but Featherstonehaugh's Snipe was too high. 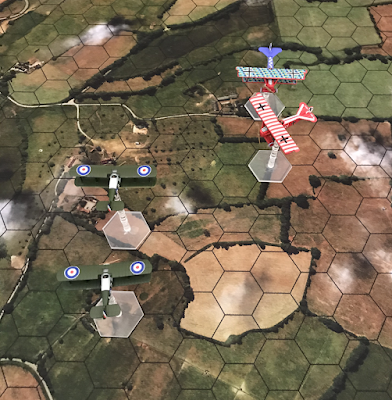 Featherstonehaugh's Snipe met Lockbach' speckled D.VII head on and exchanged fire. Featherstonehaugh must have been distracted, because Meier's striped D.VII got on his tail and opened fire. 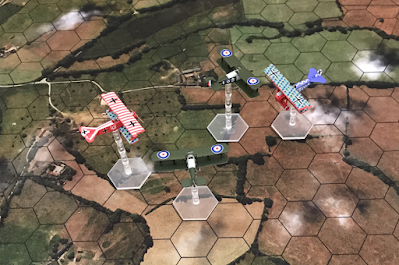 Yates continued straight ahead and Lockbach turned his speckled D.VII tightly onto Yates's tail and opened fire. As Yates later described it to his fellow officers in the mess, he must have had the luck of the devil, because as Lockbach opened fire, something caused Yates's Snipe to slide sideways and Lockbach's hail of bullets missed by a hair's breadth. 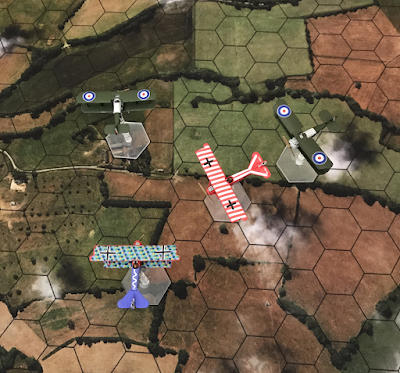 Meier went straight ahead while ferociously kicking at his rudder pedals to get the rudder working again. Yates performed a split-s. 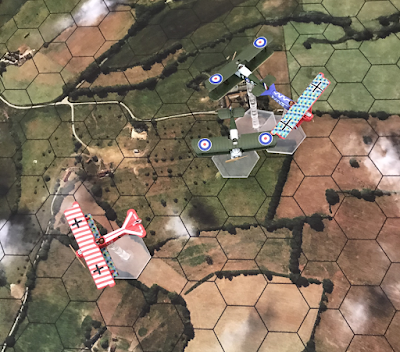 Both Featherstonehaugh and Lockbach headed away from the dogfight while trying to unjam their machine-guns. Yates and Meier circled round each other, both trying to get in a burst of fire but neither succeeding. 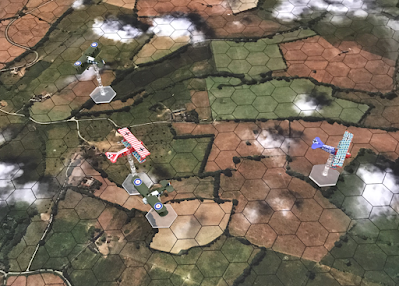 Both Featherstonehaugh and Lockbach headed back towards the fight. Yates turned sharply right and Meier headed over to join up with Lockbach. Featherstonehaugh flew straight ahead into the fight, but unfortunately for him both Lockbach and Meier predicted this and turned in to open fire on him. 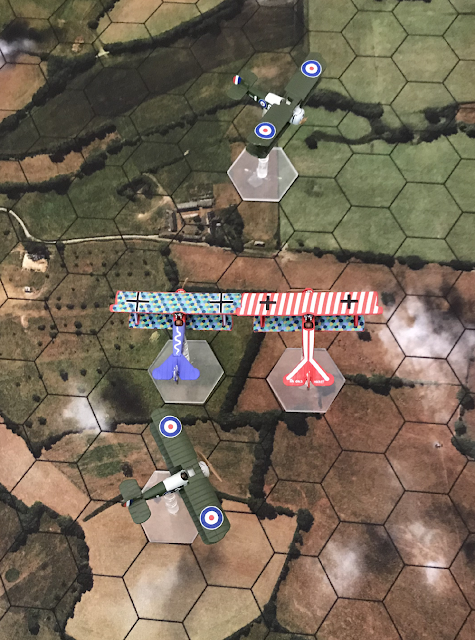 Meier was concentrating so hard on shooting at Featherstonehaugh, that Yates managed to sneak in behind him and a bullet from Yates's machine-gun wounded Meier.

Yates and Meier turned towards each other and opened fire nose-to-nose. Strangely enough both of their machine-guns jammed after firing a short burst. 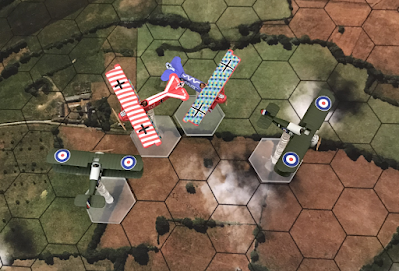 Featherstonehaugh skilfully shook off Lockbach's speckled D.VII which had been tailing him.

Yates and Meier tried to un-jam their machine-guns. 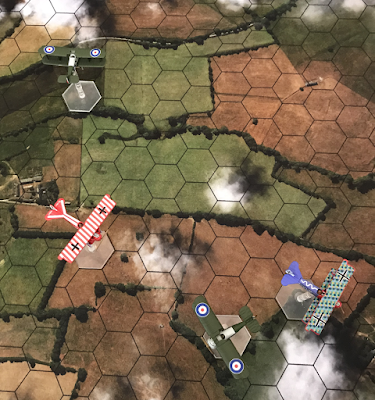 Featherstonehaugh in his hole-ridden Snipe dived away steeply followed by both Fokker D.VII's. Meier got in a parting shot. 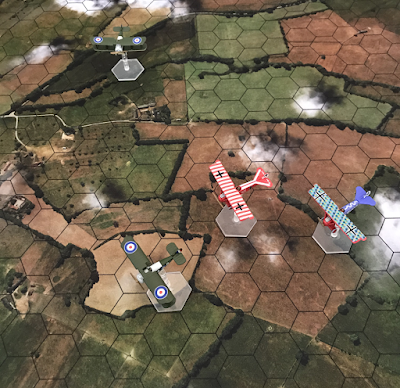 Featherstonehaugh's hole-ridden Snipe continued to dive and was now too far bellow Meier for him to get in an accurate shot.

Lockbach turned away and Yates entered the dogfight again. 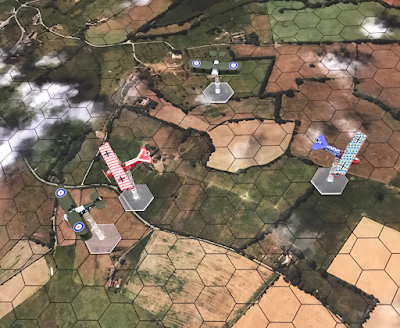 Featherstonehaugh turned his hole-ridden Snipe sharply left causing Meier in the striped D.VII to overshoot. Lockbach in the speckled D.VII closed in the hope of finishing off Featherstonehaugh. 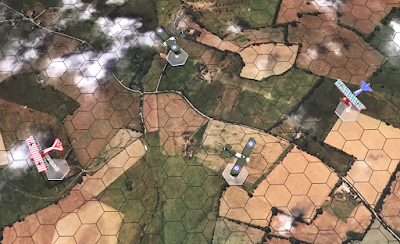 Even Meier wanted a chance at finishing off Featherstonehaugh, but he was too fast and too low for the Fokkers to catch. 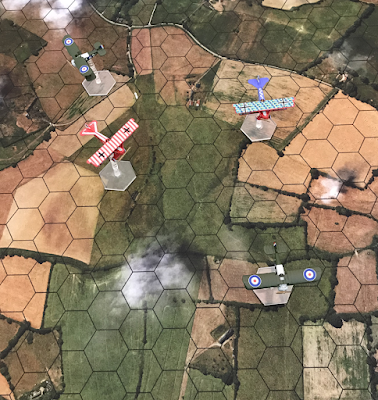 His aircraft full of holes, Featherstonehaugh dived his Snipe away from the dogfight before the enemy could get in a fatal burst. 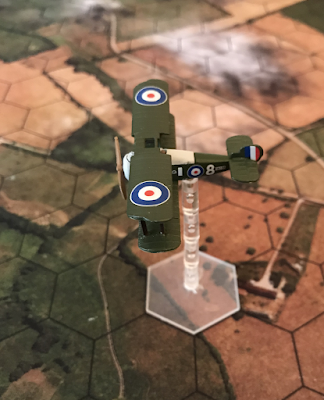 His aircraft nearly as hole-ridden as Featherstonehaugh's, Meier dived his D.VII away from the dogfight before the enemy could get in a fatal burst. 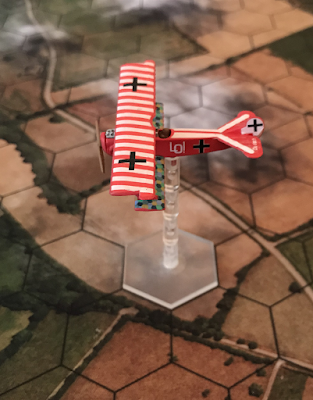 Yates and Lockbach circled round each other, both try to get on their opponents tail but without success. With dark storm clouds gathering, they both headed back to their aerodromes.

Rain had started to pour down as Featherstonhaugh turned in for landing in his bullet-ridden aircraft. So much of the canvas has been shot away that he more or less lands vertically. As the aircraft came to a halt, the landing gear collapses. Featherstonhaugh jumps out, surprisingly unscathed.

Yates follows in an almost undamaged plane. Through the rain he sees Featherstonhaugh's Snipe collapse, so he side-slips his aircraft in order to land further over and avoid his wingman. However because of the bad visibility, he discovers too late that someone has tied up the squadron's mascot, Malcolm the goat, out on the runway where he is happily chewing the grass! Collision is inevitable and even Yates's Snipe will need to be scrapped.

Yates is sure someone tried to kill him or Featherstonehaugh through this ambush, but who could have done such a thing?

With tears in his eyes, Corporal Boyd carried Malcolm to the squadron's doctor. While somewhat tipsy, Boyd had tethered Malcolm on the runway to graze. He'd been given wine by Half Pint and this was the first time young Boyd had tasted French wine. Overcome with  remorse, Corporal Boyd sought out Reverent O´Hara, the squadron chaplain. After long discussion, Boyd swears to become tea-total. The next morning, St Prix wakes up to the noise of bottles shattering and Salvation Army hymns as Boyd pours out the wine cellar of the squadron.