Age of Sail - The Admiral's Nephew

I have been working on a modified set of hex based naval rules (called KAOS) for fighting medium sized Age of Sail battles on hexes based on the old Avalon Hill Wooden Ships & Iron Men rules and using ships from the Sails of Glory range. I have also a set of campaign rules (KAOS CAMP) which can be used to follow the adventures of the captains through the scenarios.

Because of the Corona situation, the battle was fought via a Skype link. I plan to use a playing area with 40 mm hexes but for this test, under Corona-isolation, I used the grass green 35 mm hex playing are that I had readily available and hastily made ship bases.

British Briefing
Captain Kestrel of the 18-gun sloop STORK was called into the Admiral's cabin aboard the flagship, HMS PRINCE, anchored in The Sound. Kestrel was there introduced to the Admiral's nephew, a young and up-and-coming Lieutenant commanding the 10-gun cutter WEASEL. Kestrel was to take his ship along with the WEASEL and another 18-gun sloop HAZARD to patrol the channel looking for French prizes and to give the Admiral's nephew his first enemy action in command of his own vessel. The three ships headed out into The Channel from Plymouth with the morning tide. Late  in the day, as the sun was beginning to set, they spotted two French ships.


French Briefing
You have been ordered to sortie out from the naval base at Brest and attack any British shipping in the channel, hopefully picking up some nice prizes coming in from the Atlantic. As well as your own 28-gun frigate La Bayonnaise, you will be accompanied by her sister ship Brune. You were patrolling up and down, across the channel, when as the sun was beginning to set you spy three vessels, smaller than yourself, heading down the channel towards the ocean.

Start)
The British sloops HMS STORK(6) and HMS HAZARD (7) accompanied by the cutter HMS WEASEL were broad reaching under easy sails with the wind from starboard. The French 28-gun frigates La Bayonnaise (11) and Brune (12) were running under easy sails.

The two forces started 12 hexes apart, well out of cannon range. The wind marker shows the wind blowing from the bottom of the picture.

1)
The French frigates continued downwind. The British sloops continued forward, but the Admiral's blue-eyed boy in WEASEL turned downwind and crossed the bow of STORK forcing her Captain to let her sheets fly to loose way. 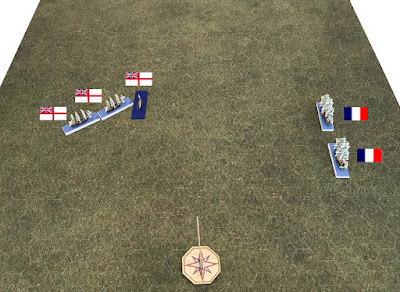 2)
Even the British sloops now turned downwind so that both forces were now sailing in parallel. 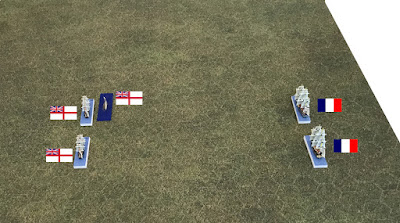 3)
The French frigates continued downwind. The British reduced sail and let the French move ahead. 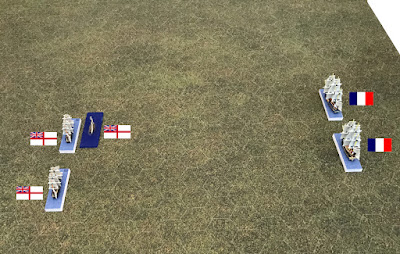 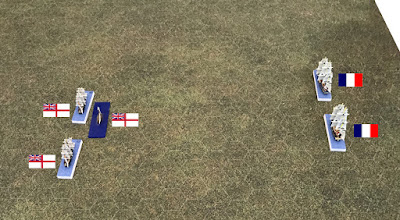 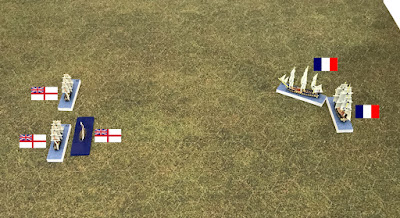 6)
La Bayonnaise continued to close her enemies with Brune following in her wake. STORK turned in to meet the French. HAZARD continued downwind and WEASEL reduced sail to let her pass. 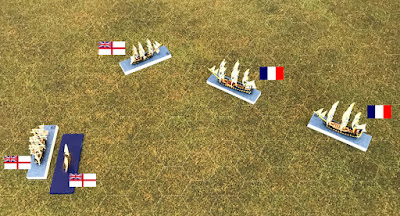 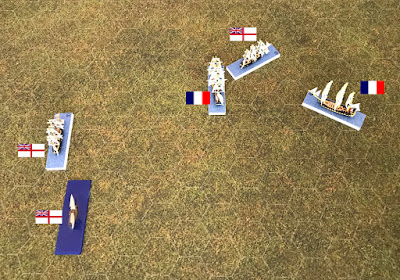 8)
La Bayonnaise and Brune fired their broadsides into STORK and she returned fire. WEASEL reduced sail to let HAZARD pass across her bow. 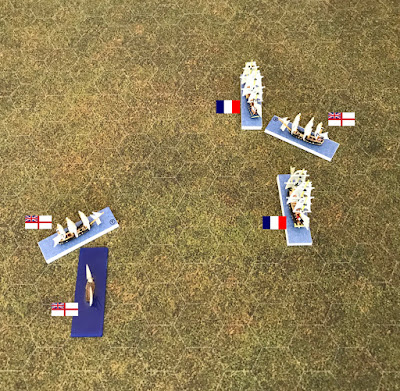 9)
La Bayonnaise and STORK exchanged fire as did Brune and HAZARD. WEASEL followed along behind HAZARD. 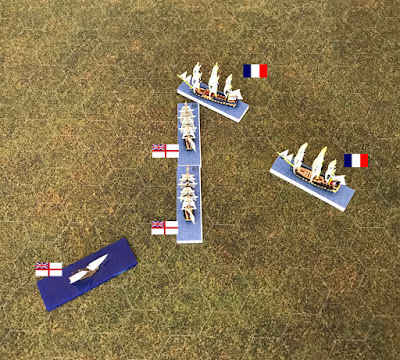 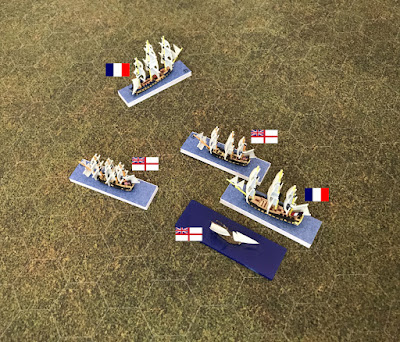 As night fell, the damaged La Bayonnaise decided that discretion was the better part of valour and turned towards Brest with HAZARD following for most of the night before loosing her in the dark. Brune's final broadside did grave damage to WEASEL's hull and then Brune turned to follow her sister ship towards Brest.

STORK signalled WEASEL to remain in company. Luckily for Captain Kestrel of the STORK, his carpenter was among the best in the fleet. Together with the crews of STORK and WEASEL he worked tirelessly throughout the night so that when dawn came both the hulls were repaired.

STORK and WEASEL were soon joined by HAZARD and they returned to Plymouth where they anchored in The Sound.

The flagship HMS PRINCE soon signalled for Captain Kestrel to repair onboard accompanied by the Admiral's nephew. Luckily for these two, the carpenter's work was so good that both their vessels appeared to be in good order, at least when seen from the flagship.

The admiral was so pleased to see his nephew returned that he handed out bumpers of port. On hearing his nephew's report, he decided that he must be reward for his gallant fight against the French frigates of much superior force. He resolved there and then to take the STORK away from Captain Kestrel and give her to his nephew. His nephew was worth such a vessel, blood always tells, and after all the admiral had never once heard Captain Kestrel say "balcony".

Luckily for the admiral, there was a frigate in Plymouth Dock, the captain of which had gone up to London to take his seat in Parliament. So together with words of weak praise - but no more port - this was offered to Captain Kestrel.