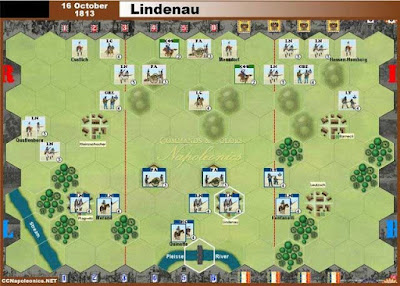 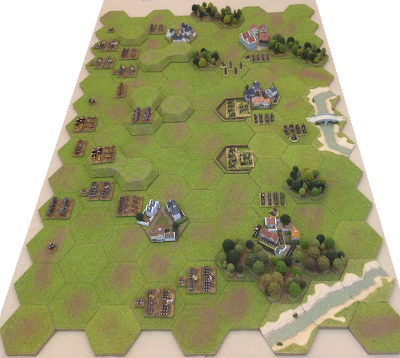 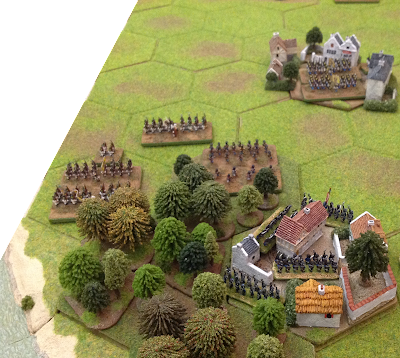 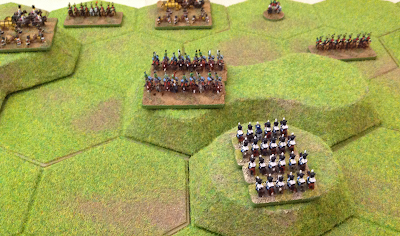 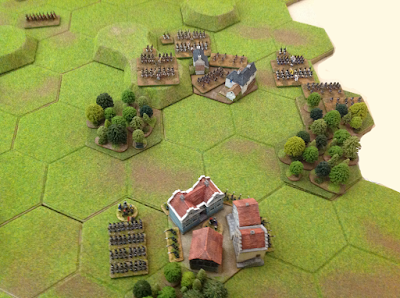 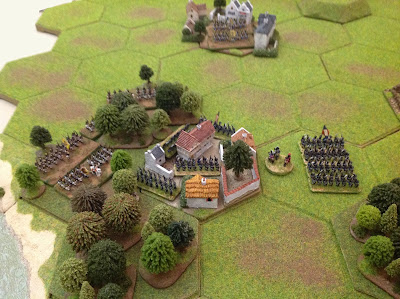 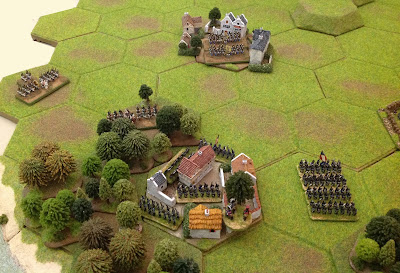 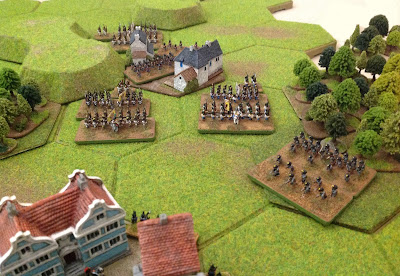 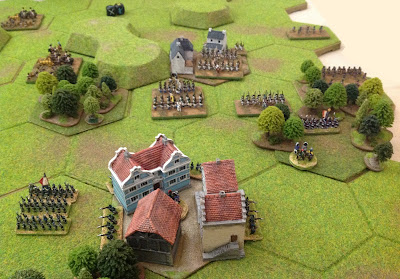 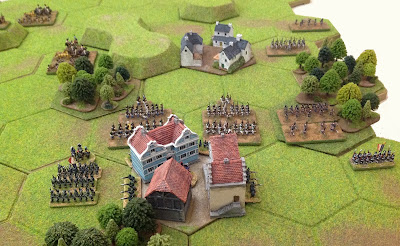 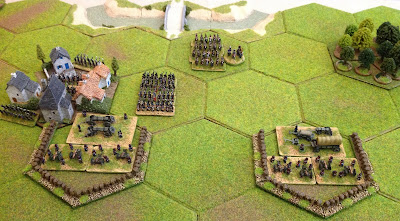 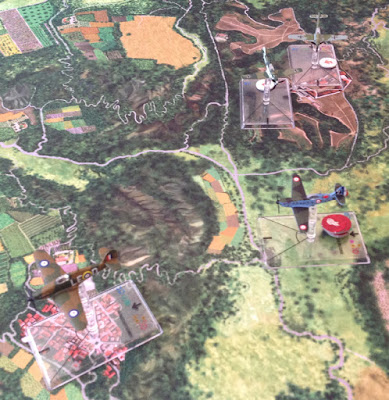 Email ThisBlogThis!Share to TwitterShare to FacebookShare to Pinterest
Labels: Wings Of Glory, Wings Of War, WW2

Sails Of Glory: A first test with autopilot

This was basically a simple scenario on the open ocean with two British 74's (HMS Vanguard and HMS Bellona) meeting two French 74's (Generaux and Commerce de Bordeaux). They start at opposite ends of the game mat, both sides in line astern and beating into the wind.

We use the Sails Of Glory rules.

The scenario was made interesting, when we chose to sail one British 74 each and let the French sail on the "autopilot" rules written by Herkybird. These rules are simple to use and surprisingly effective although we amended them somewhat during this test.

Once the ships near each other, you determine what the "autopilot" ship does, by using a combination of...

We stopped the game there, with a convincing British victory. The Generaux will be chased down by the British ship, while she is fighting the fire, she will be boarded and taken back to Portsmouth as a prize. The victory was without a doubt won more by luck than the skill of the British Captains. That however won't be mentioned in the letter sent to the Admiralty, and when printed in the Gazette both British Captains will be national heroes.

After the escape from Zornoza, General Joaquín Blake y Joyes’s army was still in trouble. Marshal Victor was pressing forward through the mountains and in position to cut off one of Blake’s divisions under the command of General Pedro Caro y Sureda, III marqués de La Romana, but Blake halted his retreat and turned to join Romana at Espinosa. The 23,000 Spaniards occupied a strong position. Romana’s division, composed entirely of regular Spanish regiments, held the Spanish right flank. After defeating the Prussians in 1806, Napoleon demanded and received this division to garrison the Baltic coast area. Upon learning of Napoleon’s invasion of Spain, the entire division boarded Royal Navy ships and returned to Spain to fight. On the first day of battle, they repulsed General Villatte’s advance division of Victor’s corps. When Victor arrived later in the day with the rest of his corps, he launched a second attack on Romana’s division, but once again the French were driven back with heavy losses on both sides, including Romana himself, killed leading his troops.

Victor was no Napoleon, but he realized the day’s attacks had forced Blake to weaken his center and left to shore up Romana’s weakened division on the right. The following day Victor ordered Lapisse’s division to attack on the Spanish left at Las Peñucas ridge. It was a fortunate decision. General Acevedo’s division held this ground, but most of his troops were newly raised, inexperienced and untrained. After a short struggle, the Spanish left flank broke and fled. With Lapisse in firm control of the heights above Espinosa, Victor ordered a general advance and the Spanish army collapsed. After the battle over 8,000 Spaniards drifted away to return home rather than reform with Blake’s shattered army at Reinosa.

The Spanish seemed to have deployed their right wing in a back position with their backs to the river. This tempted the French to attack as hastily as possible before they could rectify their "mistake".

The French advanced quickly performing a bayonet charge with their first line. This was done so quickly that their second line remained stationary and failed to support, only some cavalry from the reserve advanced in support. The terrain broke up the advance of the columns and a fierce fight ensued with the Spanish on the hills.


With no way to retreat, the Spanish fought bravely but lost many casualties. The French columns charged home bravely, supported by their skirmishing light infantry. The French cavalry did serious damage to the Spanish who had no cavalry of their own in support, and when they went into square made a good target for the French infantry. However the French had been over confident, and had not brought up their second line, so the could not force the Spanish off the heights and thus the French attack was not a success and the French retired.

While not the great success the French had hoped for, the Spanish had taken serious losses and even been forced to reinforce their right wing with troops from their centre in order to push back the French attack, so the French were not displeased with the result.

Having been stumped on the right wing, the French looked around for a better place to continue the fight.


In the centre, the Spanish had placed a large artillery battery which was far from a tempting target for the French.


However the Spanish left looked rather strung-out on the ridge and gave the impression of not being very confident. So the French decided to attack here.


Thinking the poorly trained Spanish to be an easy target, the French advanced rather rashly and opened fire with their supporting artillery. This caused the Spanish to retire into cover behind the ridge leaving a gap in their line. An enterprising Spanish cavalry commander jumped at the chance, and charged through the gap and surprised the French artillery. Taking courage from this, the Spanish recruits foolishly advanced again where they were destroyed by the superior French infantry.

The Spanish were getting desperate. They had taken heavy casualties on both wings, their left wing looked in danger of collapsing and the French second line in front of their right wing looked like it was waking up. So they decided a bold stroke was needed, and a counterattack in the centre to capture Quintana de los Prados seemed the way to go.

But the counterattack was stopped by Villatte's division and the Spanish morale was broken. Defeated on their right, then left and now their centre they retreated hastily from the field.

Yet again, Commands & Colors delivered a scenario which played out like the historical battle. It was however a closer run thing than the original and the Spanish had caused the French to take heavy losses. It is a scenario that either side could have won, but this time Lady Luck was on the side of the French.