...a scenario for Commands & Colors Ancients and part of my Roman Invasion of Britain campaign.

Most of what we know from written sources about the Emperor Claudius in Britain is found in the work of Lucius Cassius Dio with a little help from Gaius Suetonius Tranquillus. This is one interpretation of those texts.

Having been beaten at the Medway, the Britons retired to the river Thames. They were hotly pursued by the Romans with both sides taking heavy losses; the British losses occurred when they were yet again outflanked by Batavian auxiliaries swimming (across the Thames) and the Roman losses when they were ambushed in the swamps. The Romans established themselves with 3 legions (IX Hispana, XIV Gemina; and XX Valeria Victrix) north of the Thames and one legion (II Augusta) to the south. Then Aulus Plautius halted and sent for Claudius as he had been instructed.

Claudius travelled from Rome to Boulogne where he met an escort that included elephants. He boarded a ship of the Classis Britannica, crossed the channel and followed the long established trade route via the Watsum channel, the Thames and finally the Roding to join Aulus Plautius and the legions. Taking over the command, Claudius put the legions in motion in order to take Camulodunum the capital of the Catuvellauni. He crossed the Chelmer at a ford and then engaged the Britons, who had gathered at his approach.

The XX legion attacked frontally accompanied by Claudius and the elephants. The XIV legion attempted to cut of the escape route to the west and the XX legion outflanked the defensive line of the Chelmer. The Britons were defeated, Camulodunum taken and Caratacus withdrew westwards towards Wales.

After only a few days in Britain, Claudius departed for Rome.

It is probable that the elephants were just for show, rather than a fighting unit, but the possibility that they could have fought is too good to resist. 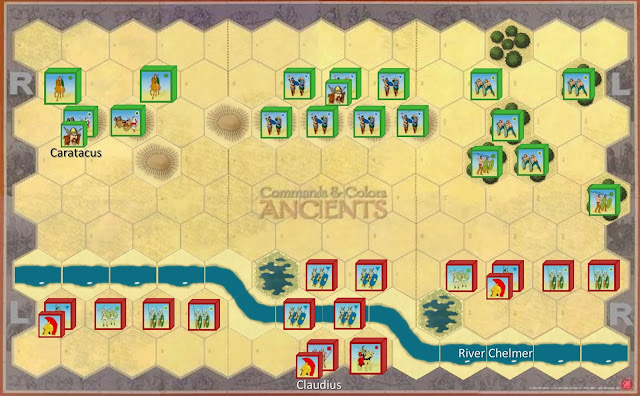