This is the eighth scenario in a Battle of Britain campaign that follows the exploits of the fictitious Country of Dampshire 369 Squadron Auxiliary Air Force. We use the Wings of Glory WW2 rules, slightly modified to give faster play, together with our own set of campaign rules. We use the Wings of Glory planes where the right model is available, other manufactures are used to fill in the gaps.

The Luftwaffe had a much better search and rescue organisation than the RAF. They used Heinkel He 59 C floatplanes to pick up pilots who had been forced to ditch in the sea. These aircraft carried Red Cross markings and were unarmed search and rescue aircraft. 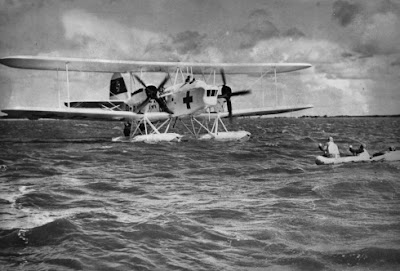 However, in London it was suspected that these planes were not only being used to rescue downed pilots but also to spot the position of convoys that could then be attacked.

Although several He 59 C floatplanes had already been shot down by Fighter Command (despite their red cross markings), it was not until 14 July that an order was circulated to all pilots ordering them to shoot down such aircraft, because they were being used for “purposes not consistent with the privileges generally accorded to the Red Cross”.

German records show that 21 of these aircraft were lost to enemy action between July and the end of October, with others failing to return after collisions, sea landing accidents, and, in one case, landing in a minefield.

A flight of Blenheims returning from a morning raid on airfields in France had reported seeing a He 59 C floatplane circling over the Channel. Knowing that at convoy was expected soon, and not wanting its progress to be reported by the plane, Fighter Command Headquarters telephoned through to 369 Squadron ready room.

Foxy Moron and ”Half Pint” Carruthers were busy organising the evening's entertainment so Pilot Officers Cholmondeley Featherstonehaugh and Sir Price were scrambled in a pair of Spitfire Mk IIs.

The evening before, Sir Price had done a deal with the Fitter Walker, a notorious spiv, to provide himself with a private stash of bacon. Sir Price had just finished off a huge breakfast with piles of bacon; he had the feeling it was going to be a good day, when the telephone call from headquarters was put through.

The Heinkel floatplane was where the bomber pilots said it would be, but they hadn't mentioned that it was protected by two Messerschmitt Bf 109 E-4s. The Heinkel was stopped on the sea so Sir Price dived down to sea level to attack, while Cholmondeley provided high cover.

Oberleutnants Sepp Schlangenaugen: and Freiherr C.G.Sommarlath flying the 109s chased of Cholmondeley and then turned their attention on Sir Price who had already opened fire on the Heinkel at maximum range. 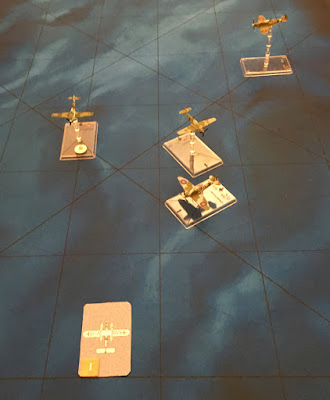 The 109s were diving down on Sir Price, who managed to get off another burst at close range. The Heinkel was looking like a sieve; full of .303" bullet holes. Its crew were seen jumping in a dinghy. 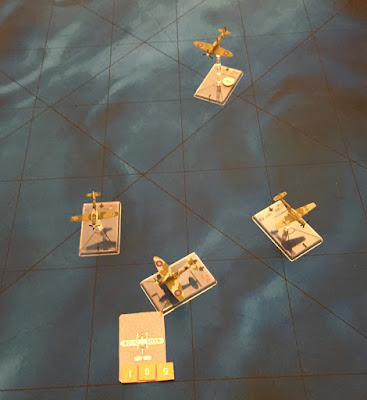 Sir Price was concentrating hard on the target, and his final shot caused the fuel tank on the Heinkel to explode. "A kill", he thought to himself, "I knew it was going to be a good day." But just as he finished that thought, the two 109s pounced on him and their cannon fire destroyed the Spitfire. Sir Price managed to belly land on the water and clung on to some of the wreckage. 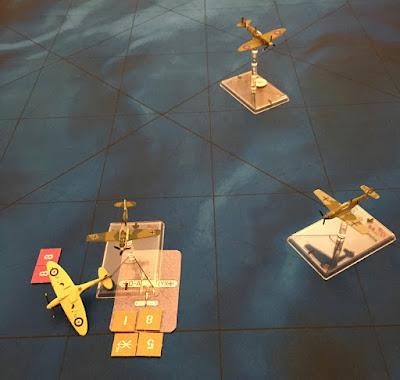 The 109s were getting low on fuel so the headed back to France. Cholmondeley from his high position, saw Sir Price's predicament and radioed the controllers and then circled Sir Price's position.

An RAF rescue launch was nearby, and guided by Cholmondeley could soon pluck Sir Price from the cold Channel waters.

Back at their base Sir Price was feted for his kill, and Cholmondeley for guiding the rescue launch. Foxy Moron and ”Half Pint” Carruthers had organised a party with liberated champagne to show off the artworks featuring cherubic nudes that they had saved from the advancing Panzers in the Low Countries.

I tried hard to find a model of a Heinkel He 59 C floatplane in 1:200 scale but nobody appears to make one.
Posted by Keith at 3:56 PM