In these times of isolation because of corona, I have been playing sequentially through all the scenarios the from Commands & Colors Ancients Expansion #1 - Greeks and Eastern Kingdoms against a friend over Skype.

Next on our list was scenario 118, the Battle of Beneventum...

Pyrrhus returned from Sicily to Italy in 275 BC with a weak army which he quickly recruited up to a strangth of 20,000 infantry, 3,000 cavalry and 20 elephants in order to attack Rome once again. He was met by Consul Manius Curius Dentatus with an army of 20,000 infantry and 2,000 cavalry. The Romans set up camp near Beneventum to await Pyrrhus.

In time for the fight, I received a small package through the mail. I opened it up to find that my friend had made me a game board, but no ordinary one. When I opened it up, it folded out like in many children's books, and the camp fortifications and woodland popped up.

We both set up the battle and started the Skype call. Battle commenced.

I was lucky in my command cards, and was able to get my troops all out of the fortifications and advancing on the enemy. Despite loosing the cavalry on my right flank fairly early it was a close fought battle. I was leading 6 banners to 5, all I needed was one more banner to win the game.

I had lost my heavy infantry and my weakened medium infantry wasn't looking forward to facing the phalanx. Luckily the phalanx hadn't moved from its baseline. So I sent forward the light infantry on my right flank to pester the Epirote elephants. 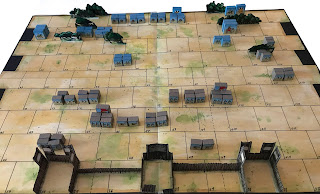 My light troops, so annoyed the elephants that they went on the rampage. Their light infantry were not affected but they rampaged towards the board edge trampling their own light cavalry which lost its one remaining block. 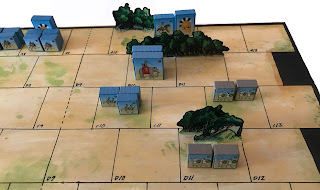 The loss of the light cavalry gave me my seventh and final victory banner. It was a wonderful feeling, to gain the victory when the enemy's elephants rampaged through their own friends causing carnage.