During the Battle of Britain, the Luftwaffe performed fighter sweeps over the South of England with the intention of bringing the RAF fighters to combat and destroying them.

As dawn broke at RAF Little Bobbington the pilots saw two brand new Supermarine Spitfires coming in to land. Pilot Officers William ”Half Pint” Carruthers and Emmett Hollingberry rushed from the dispersal hut to examine the new planes. They were especially interested in the wings, out of which poked large cannon. These were the new B wings which had been modified to carry one 20 mm Hispano cannon per wing, which replaced the two inner .303 machine guns on the normal model.

Normal Damage Tokens: BCC / AC
One Cannon Jammed: BC / C
Both Cannons Jammed: B / A

Pilot Officers William ”Half Pint” Carruthers and Emmett Hollingberry were scrambled to meet some incoming Bandits. However they failed to make contact. Somewhere near Ramsgate, on their way back to Little Bobbington aerodrome, they spotted two Messerschmitt Bf 109 E's over the Channel heading towards England. They turned to intercept. 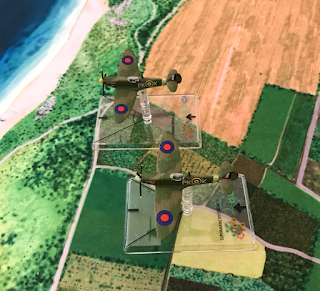 The Germans spotted the oncoming Spitfires and headed straight towards them. 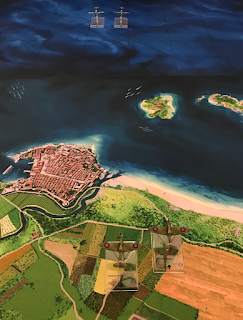 "Pincer!!" shouted Half Pint over the radio. He slipped his Spitfire right and Hollinberry turned left, as the Me 109s continued straight ahead into Half Pint's trap. 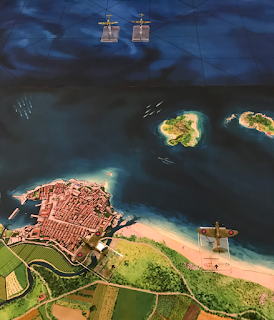 Half Pint continued to slip his Spitfire to the right and Hollinberry flew left, as the Me 109s continued straight ahead into Half Pint's trap. 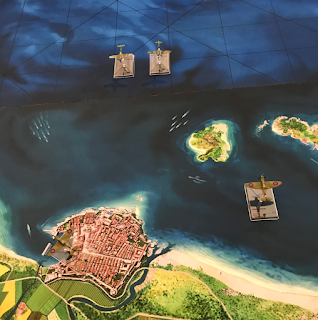 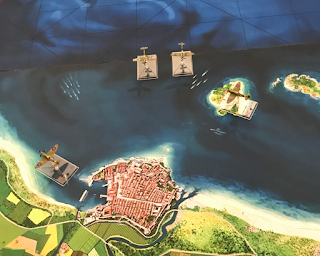 Half Pint exchanged fire with the nearest Me 109 at long range. The cannon fire from both planes missed their opponents, but Half Pint's four .303 calibre Browning machine guns punched holes in the Messerschmitt's fuselage. 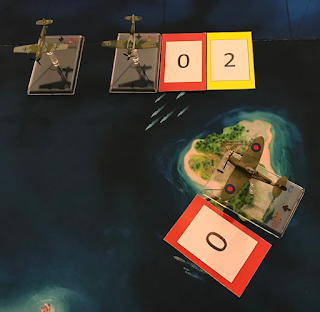 Half Pint flew straight ahead towards the Me 109 which slipped in towards him. Hollingberry turned slowly right as the second Me 109 turned sharply towards him. 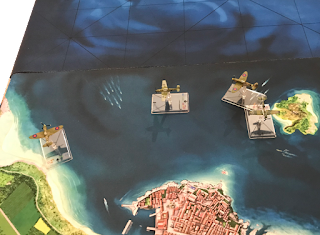 As Half Pint flashed passed the Me 109 with only inches to spare, both planes opened fire. The second Me 109 fired a burst hitting Hollingberry at extreme range.

[Note that when using the autopilot rules, the German planes ignore any special damage] 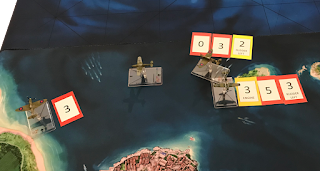 Hollingberry finally turned in to face an Me 109 as Half Pint got in behind him. 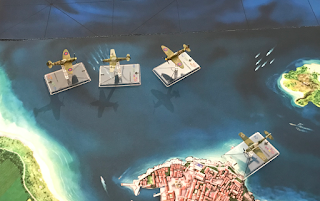 Both Spitfires opened fire on the Me 109 causing some nasty holes to appear. Hollingberry's Spitfire shuddered as an exploding cannon shell jammed the rudder controls. 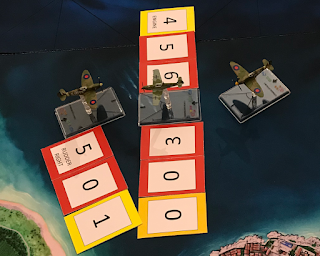 The three planes in the dogfight all flew straight, while the second Me 109 turned in to have a go at One Pint who had been concentrating on the wrong enemy. 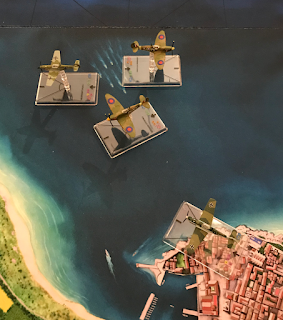 A long range burst of cannon fire damaged the rudder controls of One Pint's Spitfire. 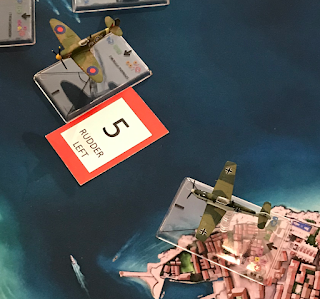 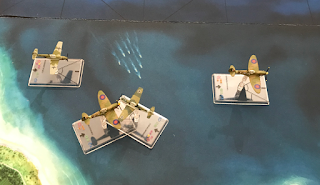 Half Pint was caught in a close range cross-fire from both enemy planes, although he managed to get in a nasty close range burst at one of them.

[Note: We have a house rules that allows overlapping aircraft to fire at each other.] 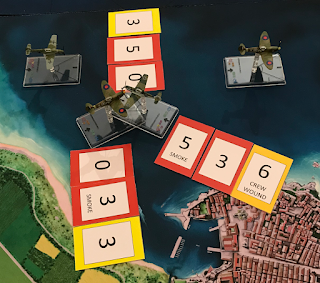 Half Pint accuracy was so good, that he wounded his opponent, who's Me 109 plummeted seawards. Because of his wound, the pilot didn't have the strength to either bail out or ditch properly. His plane exploded when it crashed into the see.

Half Pint's Spitfire started smoking and dived out of the dogfight. Luckily he had the strength to pull up the nose just in time and ditch off the coast of Ramsgate. 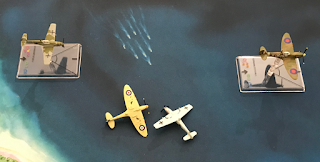 Now Hollingberry performed a half-loop and turned to face the Me 109 behind him. 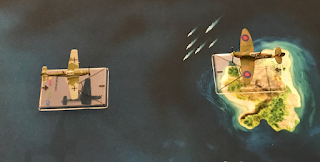 They opened fire at long range. Hollingberry saw, rather worryingly, that his starboard cannon wasn't firing; it had jammed. 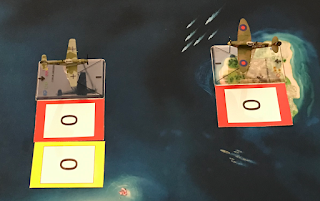 The two planes wizzed passed each other with only inches to spare. 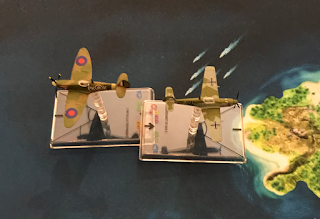 Hollingberry opened fire, but now even his remaining cannon jammed. Only bullets from his machine guns were hitting the Me109.

The Me 109 returned fire with devastating effect, its cannon fire blew huge holes in the Spitfire's fuselage and caused an petrol leak which caught fire. 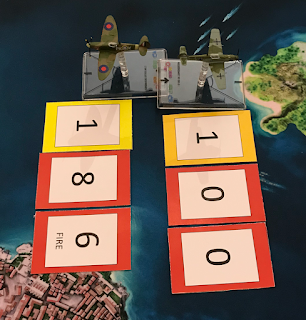 Hollingberry could do nothing to save his stricken plane. He pushed back the canopy, rolled the plane over and bailed out. 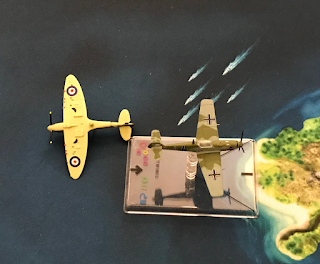 The German pilot in the lone remaining aircraft turned his Me 109 for home. Upon landing he saw that it was full of holes and looked like more like a sieve than a Messerschmitt. He celebrated his victories (he claimed both Spitfires) and his lucky escape by downing large quantities of looted Champagne and Cognac.

William ”Half Pint” Carruthers ditched his stricken Spit in the Channel. Margate's lifeboat, the Lord Southborough, was sent out to rescue him. The crew pulled him aboard, bandaged his wounds and made him feel comfortable with a generous helping of brandy which he later declared had ‘wonderful results’.

Emmett Hollingberry bailed out from his flaming plane. He pulled the ripcord and his parachute opened. Hanging below this silken canopy he floated downwards. As he descended the wind blew him over the shoreline, across that barbed wire and booby-traps on the beach and dumped him on the shorefront promenade. Rather dazed by the heavy landing and a bashed head, he looked up and saw through misty eyes, four beautiful nubile young ladies rushing towards him. It took Hollingberry only a few seconds to blink his eyes and shake his head to clear it. But in that time, the young ladies had disappeared. At first he thought it was just a dream, until he realised that his silken parachute had disappeared with them.