This is a game that uses the Wings of Glory rules on a hex mat. We use hexes in order to simplify play over the Internet while staying isolated at home. Each aircraft has a number of different manoeuvres it can perform, but instead of being represented by arrows they are represented by hexes traversed.

The squadron has been tasked with attacking a German supply dump. Aerial reconnaissance has identified the target, but it is not within range of the artillery, so Army HQ has decided to order an aerial bombing mission.

The bombing will be carried out by an Airco DH.4 which will be escorted by two Sopwith Camel scouts. The DH.4 will be flown using my two-seater autopilot rules. 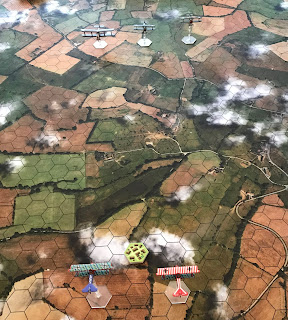 Turns 1 - 4:
The DH.4 flew steadily towards the target, turning left to line up better with the supply dump.

The Sopwith Camels moved in front of the bomber to protect it.

Both Fokker D.VII scouts closed up and manoeuvred so as to attack the bomber head on. 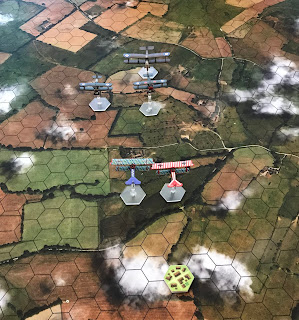 Turn 5:
The Camels split into a pincer movement as the Fokkers moved straight ahead. 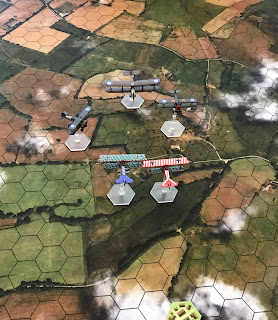 A lucky shot from the blue Fokker wounded the pilot of the grey-nosed Camel. 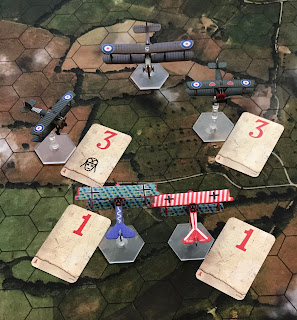 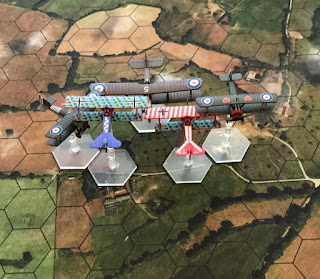 Both Fokkers opened fire at close range on the DH.4.
[Note that aircraft using the autopilot rules ignore special damage]

The grey-nosed Camel and the DH.4 both fired close range bursts into the blue Fokker, wounding its pilot. 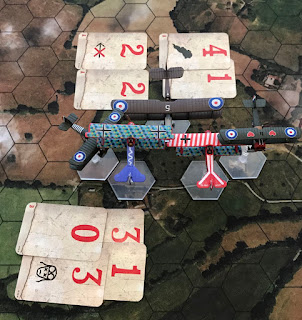 Turn 7:
The DH.4 turned away, trying to evade the Fokkers. The red Fokker performed an Immelmann turn to come face to face with the red-nosed Camel. 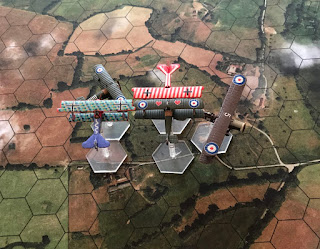 The blue Fokker opened fire on the grey-nosed Camel killing its pilot. [The second wound kills the pilot]. The red Fokker fired a close range burst into the red-nosed Camel, but did very little damage.

The two Camels and the DH.4's observer all firer into the red Fokker at close range. 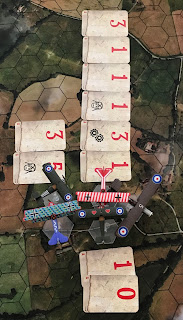 With its pilot KIA, the grey-nosed Camel spiralled into the ground. 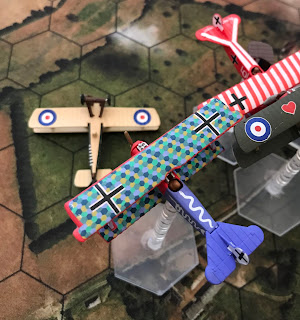 Turn 8:
The DH.4 turned back towards the target, and both Fokkers turned after the DH.4. 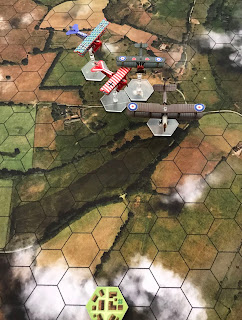 The red Fokker opened fire on the DH.4 without doing any serious damage. The rear-gunner of the DH.4 returned fire causing the Fokker's engine to burst into flame. 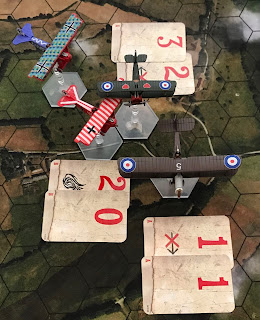 Turn 9:
The DH.4 headed towards its target while Camel performed an Immelmann,

The red Fokker slipped left to reduce the effect of the flames and the blue Fokker continued to chase the bomber. 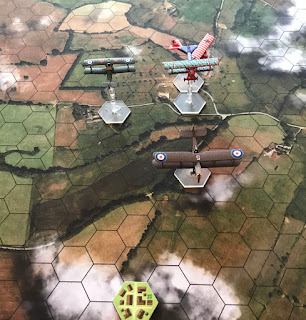 The flames did little damage to the red Fokker.

The blue Fokker exchanged fire with the DH.4's rear-gunner. The rear-gunner was a lucky shot, and smoke started pouring out from the Fokker's engine. 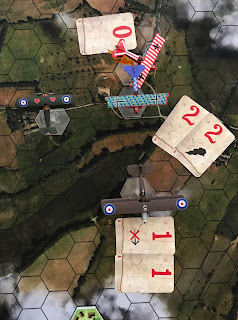 Turn 10:
The Camel turned back chasing the blue Fokker. The DH.4 continued towards the target with the blue Fokker on its tail, however because of the smoke pouring out of the engine couldn't gain any advantage of its position. The red Fokker slipped left to reduce the effect of the flames. 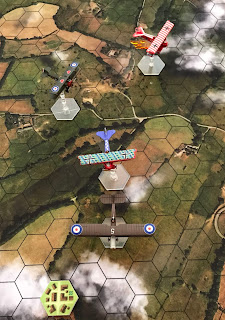 The Camel fired a long range shot into the blue Fokker hitting its engine. Even the rear-gunner in the DH.4 opened fire, even he hit the Fokker's engine. 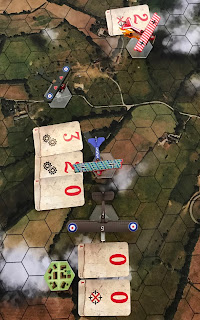 The Fokker engine seized because of the damage, and it tumbled earthwards. 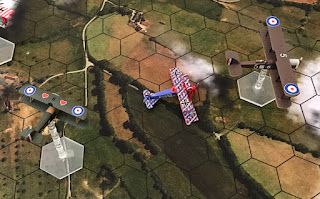 Turn 11:
The red Fokker continued to slip left in order to reduce the effect of the flames. The Camel chased after it. 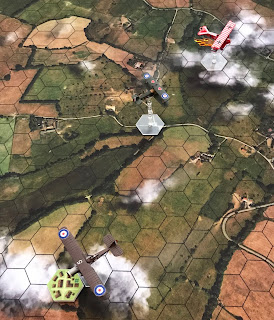 The flames from the burning engine and the burst of machine gun fir from the Camel hit the Fokker. 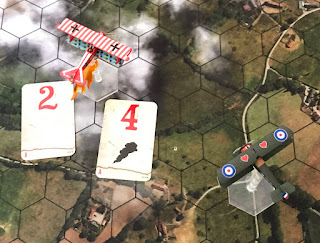 The Fokker could take no more damage, and tumbled in flames earthwards! 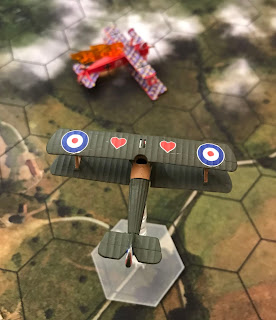 Turn 12:
The DH.4 flew over the target dropping its bombload. 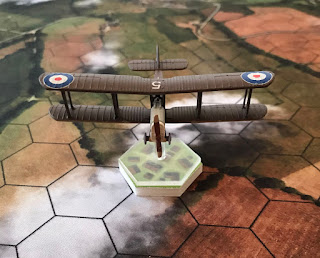 As the DH.4 turned for home, smoke was seen rising from the supply dump.