Camel vs Albatros on the Western Front

Captain Jack "Casanova" Yates and Lieutenant William "Billy the Bishop" Tempest were given a mission of patrolling over the trenches.

Captain Jack "Casanova" Yates would fly his grey-nosed Sopwith Camel. Lieutenant William "Billy the Bishop" Tempest had a red-nosed Camel onto the top wings of which he had persuaded his erks to paint two red hearts. The erks have been trying very hard to find out the reason behind these two hearts, but all they have come up with so far is that he is a superb chess player (hence his nickname) and a copious beer drinker,

They took off from the aerodrome and headed towards the front lines. Once over the trenches, they spotted two Albatros D.Va scouts heading straight towards them. 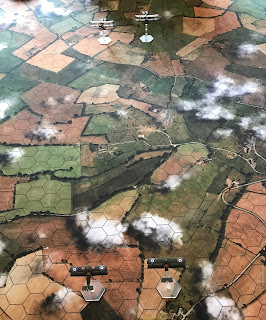 Turn 2:
Both sides closed without any manoeuvring. 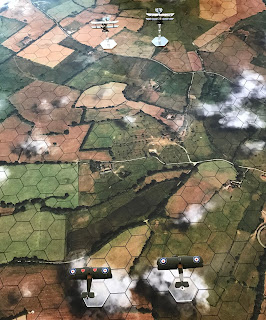 Turn 3:
Neither side wanted to turn away from the oncoming enemy. 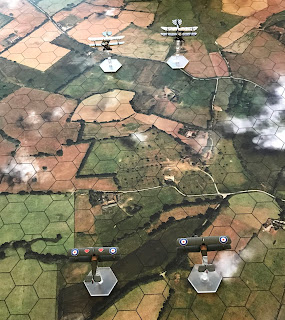 Turn 4:
Yates slipped his grey-nosed Camel to the right, while the other three aircraft continued straight ahead. 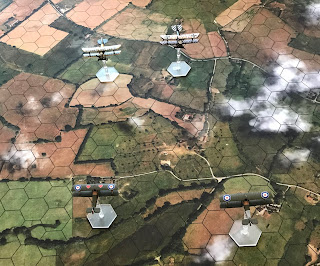 Turn 5:
The Hun pilots decided to gang up on one of the Camels, they picked the red-nosed Camel flown by "Billy the Bishop" Tempest. Yates in the grey-nosed Camel attempted to come to his wingman's aid, but misjudged the turn. 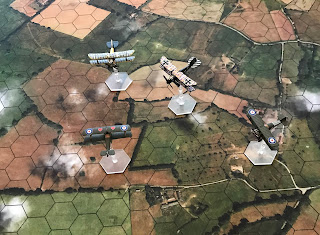 Both Huns open fire on Tempest at long range. Tempest returned fire at the yellow-bodied Albatros; smoke started pouring out of its engine. 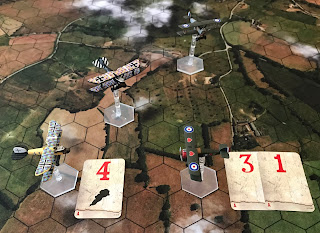 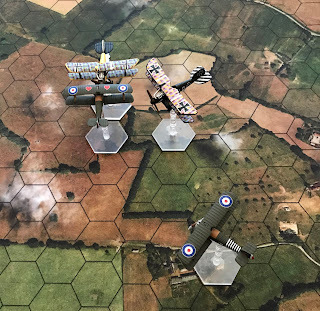 Both Huns fired at Tempest who returned fire at the yellow-bodied Albatros. [This was close range, it looks like we forgot to draw two damage cards per aircraft firing, although we did remember to give aimed fire!] 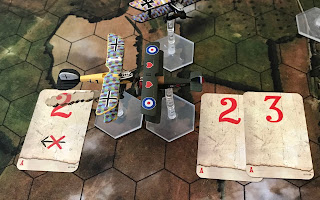 Turn 7:
Both Tempest and the yellow-bodied Albatros performed Immelmann turns. 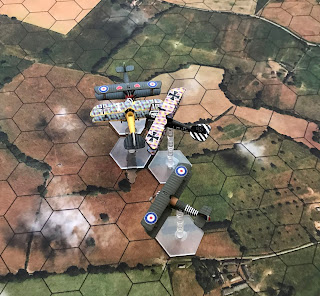 Tempest and the yellow-bodied Albatros opened fire on each other at point blank range. The black-bodied Albatros tried to get in a shot at Tempest, but his comrade flew in front of him blocking his aim. 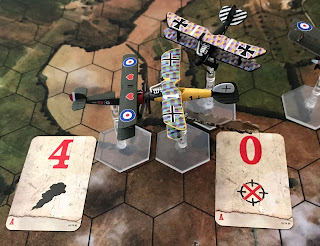 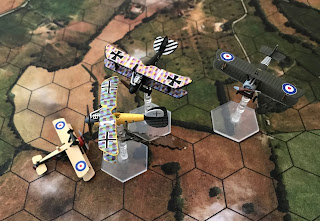 Turn 8:
The yellow-bodied Albatros flew straight ahead while trying to unjam his Spandau's. Yates turned in onto yellow-body's tail. 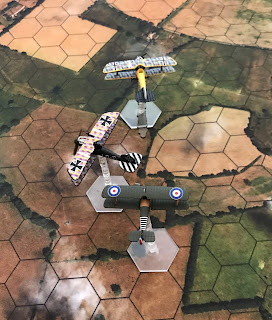 Yates decided to fire at the already damaged yellow-bodied Albatros.

Turn 9:
Yellow-body performed an Immelmann turn as Yates chased after him. 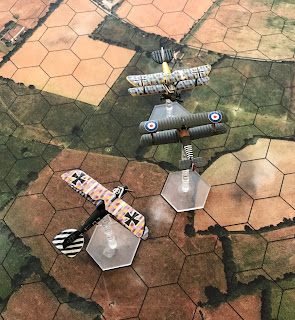 Yates already had his aim in and yellow-body's engine now started making strange and worrying noises. 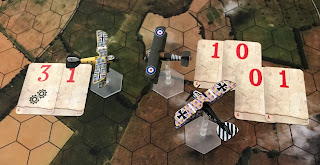 Turn 10:
Even Yates performed an Immelmann hoping to get on the tail of yellow-body, but he had slipped left so Yates came face-to-face with black-body instead. 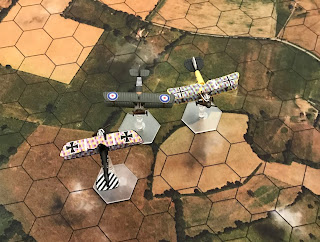 They exchanged fire and now it was the turn of the engine in the Camel to start making weird noises. 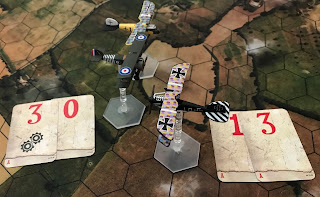 Turn 11:
Yates turned towards the yellow-bodied Camel while black-body tried to follow him. 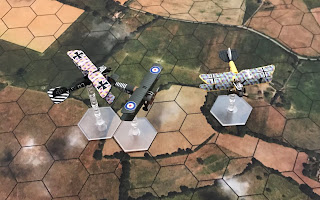 Turn 12:
Yates slipped to his left as the yellow-bodied Albatros flew into his gun sight. 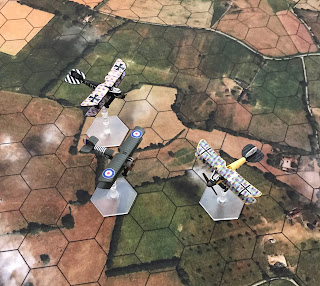 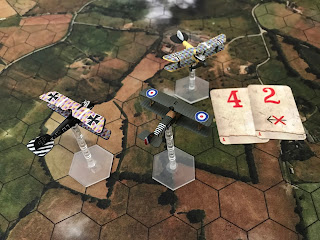 and the Albatros could take no more punishment. 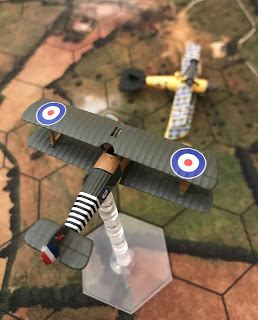 Turn 13:
Yates and the remaining Hun flew past each other without either getting in a good shot. 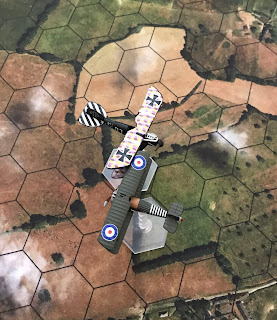 Turn 14:
The Hun flew straight ahead. Yates got onto his tail. 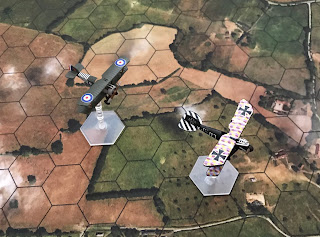 A short range burst shot holes in the black fuselage. 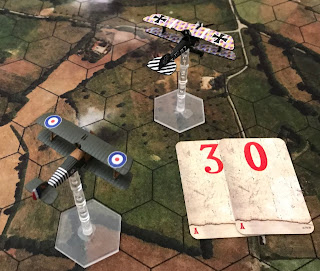 Turn 15:
The Albatros performed an Immelmann turn to face Yates. 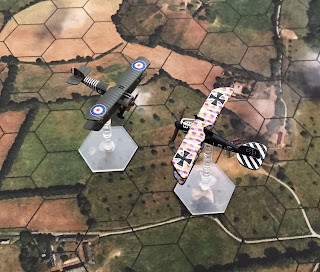 They opened fire on each other at close range, wounding Yates. 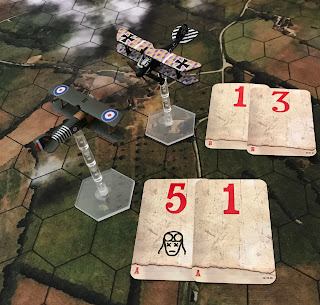 Turn 16:
Yet again, Yates and the Hun flew past each other without either getting in a good shot. 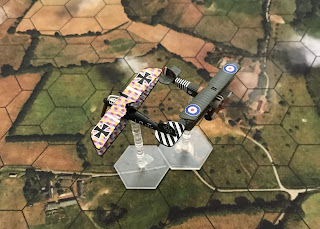 Turn 17:
And yet again, Yates managed to get his more manoeuvrable Camel onto the tail of the Albatros. 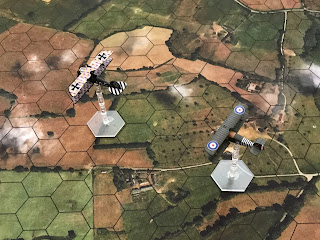 Even though the burst was a long range, it did major damage to the Hun. 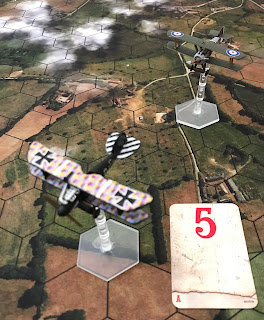 The Albatros could fly no more. 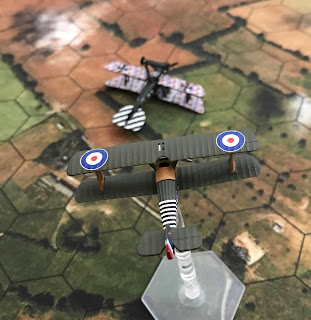 Captain Jack "Casanova" Yates returned home to the aerodrome, he performed a victory-roll above the hangers before landing to a hero's welcome.

Lieutenant William "Billy the Bishop" Tempest crash landed on his own side of the lines. He spent the afternoon up to his knees in mud before returning to the aerodrome on the back of a dispatch rider's motorcycle late that night. Already the next morning, he was on the hunt for red paint, so the erks could paint two hearts on another Camel.