This wargame was played using Wings Of Glory. The Luftwaffe planes were controlled using my "autopilot rules" based on the Wings Of Glory Solo rules by Herkybird.

July 1940: The Admiralty persisted in continuing with a traditional coastal trade, forming merchant ships into convoys protected both by convoy escorts (usually destroyers) and air cover from Fighter Command. The Germans could not resist attacking such juicy targets. This part of the Battle of Britain was known as kanalkampf (Channel Fight). There was actually no real need for the British to run convoys through the Channel and the straights of Dover, the cargo could have been sent on the railroads.

From the RAF’s point of view, the campaign was not what Fighter Command had prepared for; pilots involved in dogfights risked drowning when they took to their parachutes, because the RAF had no air sea rescue service to put into operation, whereas the Germans had He59 floatplanes for this purpose.

Two Junkers Ju 87B Stuka dive-bombers escorted by a Messerschmitt Bf 109E fighter headed out to attack a convoy. 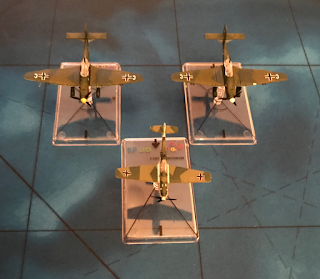 Our two intrepid RAF pilots, Pilot Officers John ”One Burst” Johnson DFC and Emmett Hollingberry, took off from Little Bobbington aerodrome in their Supermarine Spitfire Mk I's and headed out over the Channel to protect the eastwards bound convoy travelling towards Dover.

The Spitfires flew over the convoy with Hollingberry on One Burst's starboard wingtip. They spotted the Germans in the distance, heading directly towards the merchant ships. 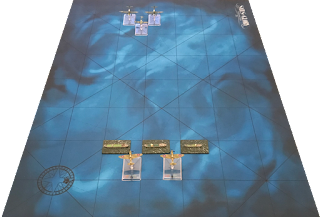 Both Spitfires slipped right. The Me 109 slipped left to meet the Spitfires and the two Stukas continued slowly straight ahead towards the convoy. 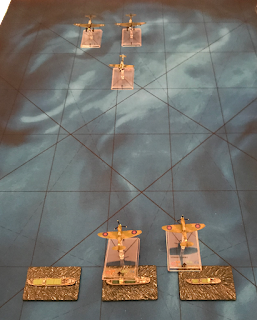 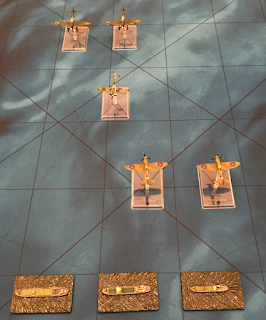 One Burst exchanged fire with the Me 109. The Spitfire's eight .303 inch machine-guns ripped large holes in the Me 109's fuselage and the 20mm cannon on the Me 109 did much the same to the Spitfire. 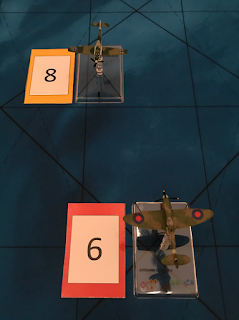 One Burst and the Me 109 both flew straight ahead, missing each other by inches. One Burst, with Hollingberry still on his starboard wing, now came face to face with one of the Stukas. 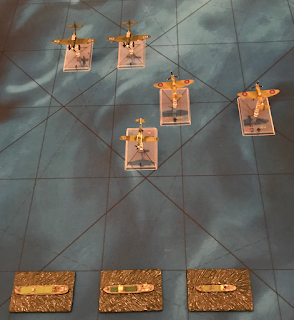 One Burst opened fire at close range, damaging the Stuka. The Stuka returned fire with its two  7.92 mm MG 17 machine gun, but these did no noticeable damage to One Burst's Spitfire.

[Note that when using the autopilot rules, the German planes ignore the smoke special damage] 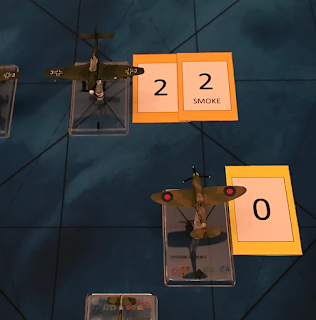 One Burst continued straight ahead passed the Stukas. Hollingberry turned in, but too late or too gently in order to have been able to target the Stukas, both of which continued towards their targets. The Me 109 performed a half-loop in an attempt to get on One Burst's tail, but was too far away to be able to target him. 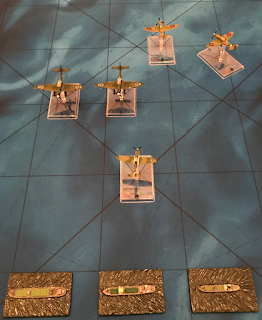 As One Burst's Spitfire flashed past the Stuka, the Stuka's rear-gunner firer off a few shots but without doing any noticeable damage to the Spitfire. 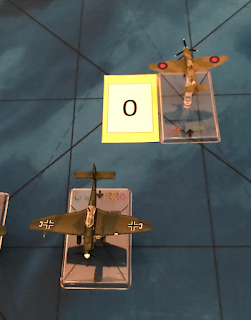 The Me 109 continued straight ahead and Hollingberry turned in tightly to meet it. One Burst turn sharply left, trying to shake the Me 109 off his tail. 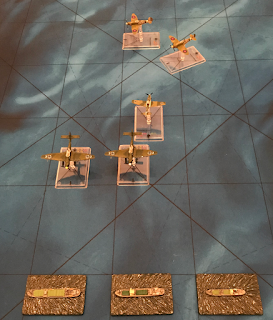 Hollingberry exchange fire with the Me 109. 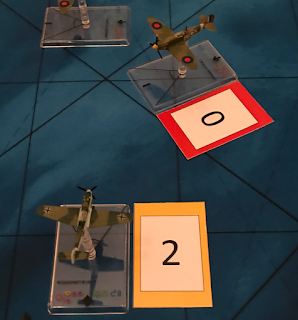 Hollingberry shot past the Me 109. One Burst turned in towards the Stukas, both of which were starting their bomb-run on the merchant ships. 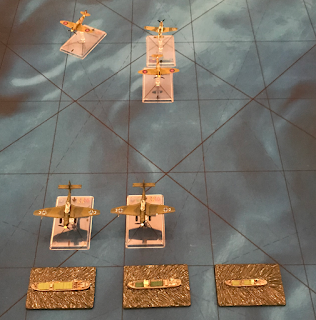 The rear-gunners of both Stukas fired off telling bursts at long range with their single MG 15 machine guns. Hollingberry opened up on the nearest Stuka but, being put off by the hail of incoming 7.92 mm bullets, he missed completely. 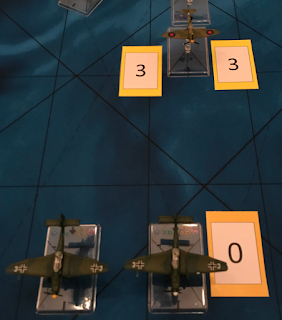 Hollingberry chased the Stukas. The Me 109 performed a half-loop to get on Hollingberry's tail. One Burst headed towards the nearest Stuka. 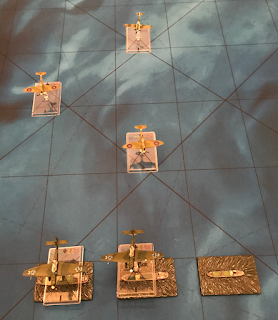 The Me 109 opened up on Hollingberry, but his cannon shells missed completely. Hollingberry had now got a Stuka centred in his sights and opened fire again. Both Stuka rear-gunners got off a quick burst at Hollingberry before the pilots put the Stukas into a dive and bombed the ships. 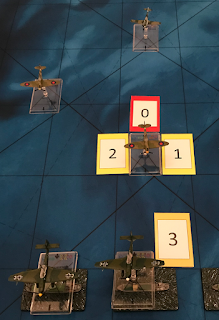 Having released their bombs, the Stukas turned for home. Hollingberry chased down the Stukas and now closed in to short range. The Me 109 was on Hollingberry's tail and trying to distract him. One Burst continued following the Stukas, but was only slowly closing the gap. 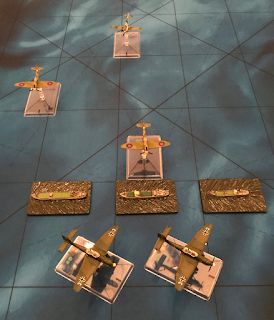 At close range, Hollingberry's eight machine guns shot up the Stuka badly. The rear-gunner of the Stuka did the best he could with a single machine gun. The cannon of the Me 109 hid the Spitfire's rudder. 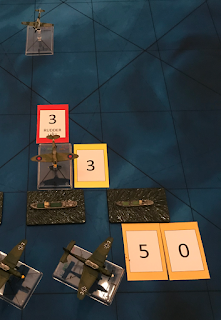 The Stukas continued to turn back towards the French coast. Hollingberry's Spitfire could turn much tighter, and he turned inside the lead Stuka.

One Burst turned his Spitfire in to help Hollingherry, but timed it badly and crossed the Me 109's nose. 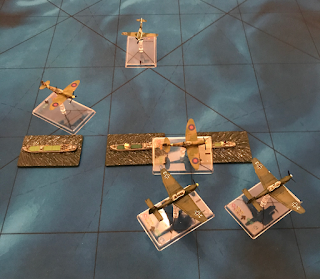 Hollingberry fired at close range into the lead Stuka, his machine gun bullet ripped holes in the German. The German rear-gunner fired back, but his single machine gun did much less damage.

[Note that when using the autopilot rules, the German planes ignore the rudder jammed special damage] 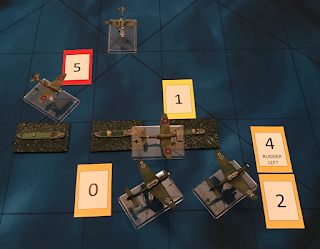 One Burst turned tightly to face the incoming Me 109. Both planes opened fire at point blank range, but the Me 109 did little damage. [Note that we have a house rule that allows overlapping planes to fire at each other]

Hollingberry continued to chase down the now servely damaged lead Stuka. The two Stukas caught Hollingberry in a crossfire from their rear-guns. [Note that when using the autopilot rules, the planes ignore the engine special damage] 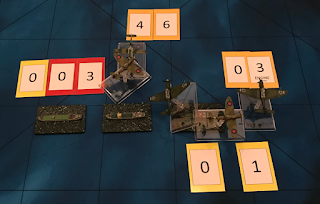 Both the Me 109 and the lead Stuka, lost control and plummeted towards the water. 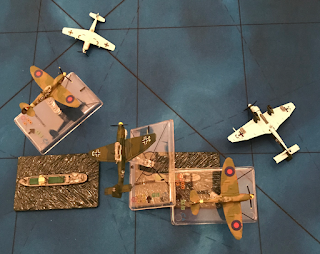 The remaining Stuka tried to turn away from the two Spitfires. 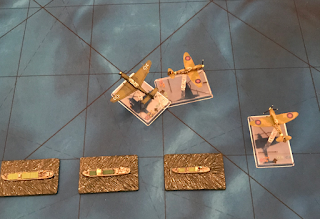 One Burst exchanged fire with the Stuka. [Note that we have a house rule that allows overlapping planes to fire at each other and when using the autopilot rules, the German planes ignore the rudder jammed special damage] 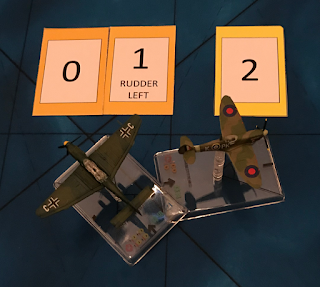 Both Hollingberry and One Burst's Spitfires were now full of holes and in a bad shape. The Stuka was still in good condition. Hollingberry turned away, gently coaxing his limping Spit homeward. 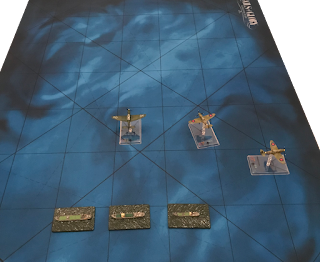 Even One Burst turned for home, not wanting to face the Stuka's rear-gunner.

The convoy ignored the downed German pilots. The Stuka got on its radio, the Luftwaffe's search and rescue organisation sent out a red-cross marked Heinkel He 59 C floatplane to pick up the downed aircrew. 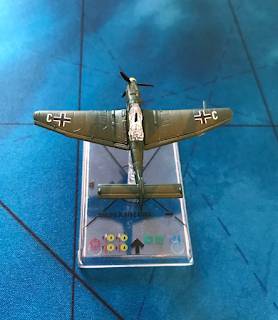 Both Spitfires returned safely to Little Bobbington aerodrome. That night, the kills were celebrated by the squadron in The Drunken Duck, the pub located just outside the aerodrome perimeter fence.

It would take a while to repair both Spitfires, so two new replacement planes were flown in very early the next morning, so our rather hung-over heroes were ready yet again to scramble.