When Major Brackton returned to the Premier Escadrille International's aerodrome from his flying visit to the County of Dampshire infantry regiment; the back seat of the DH.4 was filled with bottles of beer. He jumped out of the cockpit, ordered a nearby officer to take the beer to the bar. He ran into the office looking for the intelligence officer, Major Redmond. Before leaving the Dampshire’s, their colonel had given Brackton a few pages containing the artillery plan for a new offensive. “We sort of discovered this by mistake”, explained the colonel, “so we aren’t sure if it is genuine, it was so easy to find that it could be a Hun attempt to trick us. But if you can check it out, that would be really helpful!”

Major Brackton showed the plan to Major Redmond, the squadron intelligence officer, and told him to organise a sortie to verify whether the plan was genuine or whether the wily Huns we trying to confuse us.

Redmond decided to send out the squadron’s Bristol F.2B Brisfit two-seaters flown by Captain Tsiolkovsky with Hank Snapmulder as his observer and escorted by Charles “Half Pint” Carruthers in a Sopwith Camel scout to check out the possible locations for the German artillery batteries.

As was his wont, Captain Tsiolkovsky stowed his Imperial Golden Vodka safely under the pilot seat where he could easily reach it. As this was likely to be a long mission, he took two bottles with him.

The Kaiserliche und Königliche und Kaiserliche Jagd-Schlachtstaffel had been warned that some enemy activity was expected and they sent up two of their pilots in Fokker Dr.1 scouts to stop the Engländer from scouting behind the German lines. Udo Lockbach's Fokker bore the Eisernes Kreuz and Gaspard Hauser's Fokker bore the Balkenkreuz.

Four white markers were placed on the playing area. Under one marker was a German flag, this being the location of the German artillery. The Brisfit must fly over the markers to determine which flag they contain. Once the German flag (artillery) has been located, the Brisfit must return to its aerodrome (exit its board edge) with this information in order to claim victory.

As they approached the area where the artillery was thought  to be located, Captain Tsiolkovsky and Charles “Half Pint” Carruthers spotted two bright red triplanes in the distance. 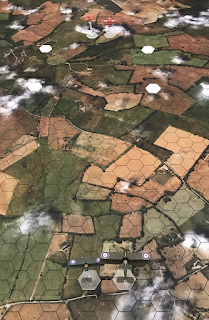 Lockbach and Hauser spotted the incoming Engländer and headed straight towards them. 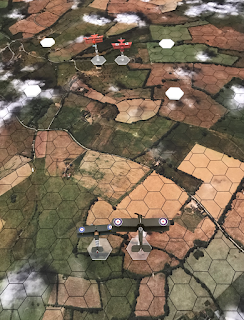 Captain Tsiolkovsky in the Brisfit wanted to avoid getting the very manoeuvrable triplane on his tail, so he decided to go for a head-on encounter. The other three pilots opted for the same tactic.

All four pilots opened fire at long range, but despite the range they all scored severe hits on the opposing planes. A bullet from Hauser's machine-gun caused the rudder of Half Pint's Camel to stick and he wouldn't be able to turn left. 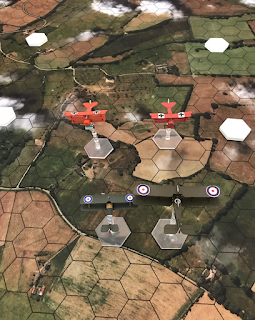 Captain Tsiolkovsky scored a lucky hit on Lockbach's Fokker which burst into flames. 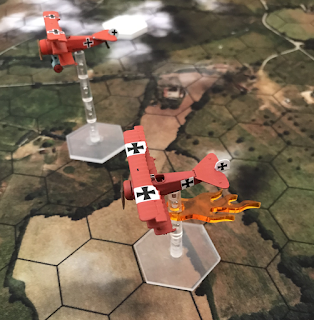 Half Pint in the Camel turned tightly to the right. Captain Tsiolkovsky slipped the Brisfit right in order to start the search for the artillery.

Unfortunately the Huns managed to predict the Brisfit's manoeuvre. Admittedly it wasn't very difficult for them, because they saw some huge white hexagons on the ground. Looking back, this was probably poor scenario design.

Both Huns opened fire on the Brisfit and the Brisfit's observer, Hank Snapmulder, returned fire.

Half Pint in the Camel opened fire but his machine-guns jammed. 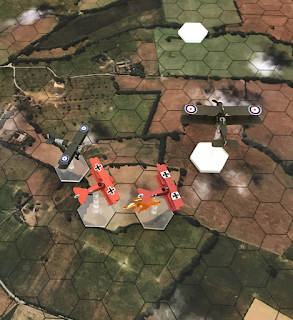 The hail of Hun bullets was intense and the Brisfit was in trouble. Its observer, Hank Snapmulder, was wounded. Another Hun bullet hit the Imperial Golden Vodka bottles stowed under Tsiolkovsky's seat and they burst into flame. 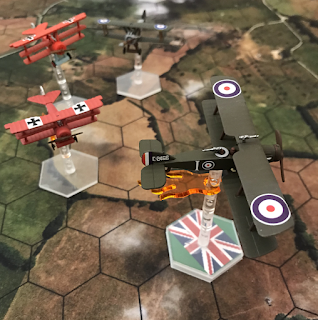 As Tsiolkovsky flew over the objective, he could see no artillery there. The only thing he spotted on the ground was a field hospital. Whether he would have been more observant, had not the Imperial Golden Vodka bottles directly under his posterior caught fire, is hard to say.

The Huns expected the Brisfit to continue towards the next objective so they headed towards it, chased by Half Pint. But Half Pint's Vickers were jammed, so he couldn't open fire, despite ending up on Lockbach's tail.

The Brisfit was now severely damaged, so Tsiolkovsky decided to half-loop and head for the safety of his own front line. This manoeuvre managed to throw off the chasing Huns. In the rear seat, Snapmulder opened fire as Lockbach's Fokker flashed past. 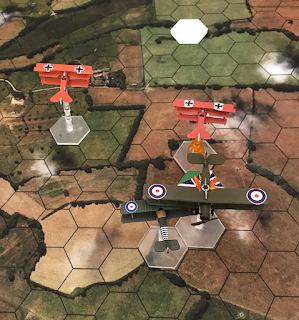 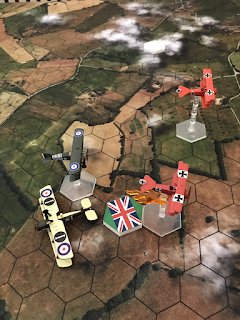 Half Pint chased after Lockbach, but he turned away from the fight and dived away.

Hauser turned left towards where he expected the Brisfit to be. 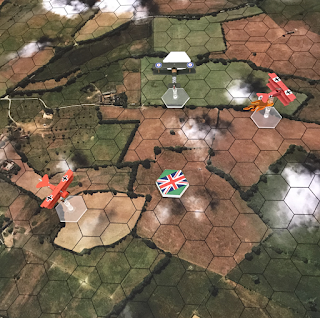 The flames finally did for Lockbach's Fokker and Half Pint could claim another kill. 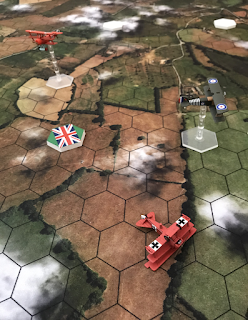 Half Pint and Hauser passed head on, Hauser was wounded and his Fokker was now only held together by spit and a prayer. 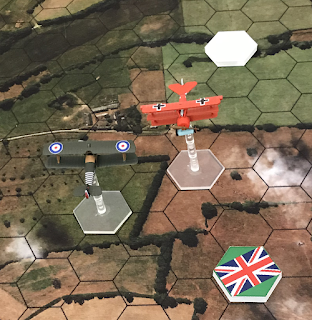 Gaspard Hauser put his Fokker Dr.1 into a steep dived, headed away from Half Pint and back towards his own aerodrome. Hauser knew that the bullet-ridden Fokker couldn't stand another burst from the Camel. 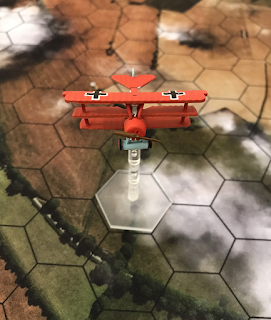 Half Pint and Hauser returned to their aerodromes.

Both Tsiolkovsky and Lockbach managed to crash-land their aeroplanes, although whether it was luck, skill or just a plain miracle is still uncertain. They did however manage to stagger away from the flaming wreckage, and any landing a pilot can walk away from is a good landing.

Meanwhile back at the Premier Escadrille International, the French Inspector St Prix had invited all the officers to the mess and treated them all to bottles of wine from his own vineyard, St Prix Troisième Cru. He wanted to talk to the officers about his investigation of how efficiently the squadron was run and especially Major Brackton's way of leading the squadron.