Aerial reconnaissance has identified three enemy ammo dumps which must be attacked. The targets have been identified as critical, but are not within range of the artillery, so Army Headquarters has decided to order an aerial bombing mission against the targets. The KuKuK Jagd-Schlachtstaffel has been tasked with this mission; at least two of the ammo dumps must be destroyed.

The KuKuK Jagd-Schlachtstaffel flight consisted of Freiherr Friedrich ”Dickie”von Salzbach and Slobomir Kraijnc in a Rumpler C.IV two-seater loaded with four 25kg bombs being escorted by Gaspard Hauser in his Fokker D.VII scout.

At this stage in the war, bombing sights had been improved, and missions were flown at around 10,000 ft. Knowing his Rumpler’s flight characteristics, von Salzbach decided to fly the mission at the slightly lower altitude of 9,000 ft. 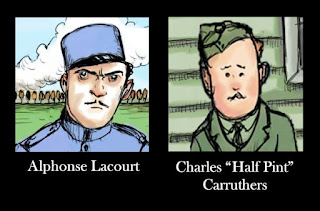 The 1er Escadrille International was patrolling in the air over their rear area at 12,000 ft. The patrol was made up of Alphonse Lacourt in a SPAD XIII and Charles “Half Pint” Carruthers in a Sopwith Snipe. When they spotted the approaching Huns, they descended to the same altitude as the Huns.

As the Germans approached the area containing the ammo dumps, they spotted two enemy planes descending to meet them. 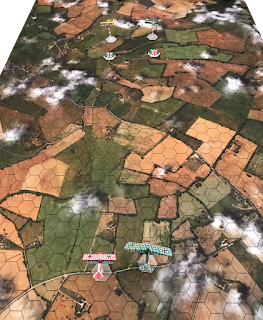 The two sides flew straight ahead towards each other.

The German's continued straight ahead. Gaspard Hauser's Fokker D.VII was still slightly behind the Rumpler C.IV thus not in a position to protect it.

Half Pint slipped his Sopwith Snipe to the right in order to meet the Rumpler head-on. Lacourt turned his SPAD XIII left to fly behind Half Pint.

Half Pint in the Snipe exchanged fire with Freiherr Friedrich ”Dickie” von Salzbach piloting the Rumpler.

Half Pint was aware that his rotary engine made his Snipe better at turning right than left, so he had kept the Fokker to his right. However an unlucky bullet from von Salzbach's machine gun, hit the Snipe's rudder and prevented Half Pint from turning right. 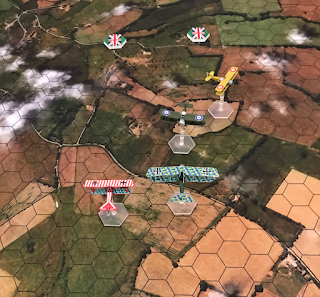 Being unable to turn right, Half Pint turned his Snipe sharply left in an attempt to chase down the Rumpler.

Using the superior speed of his SPAD, Lacourt turned right, but missed getting on the Rumpler's tail. He was however careful to make sure that he was safely behind Half Pint's Snipe.

Gaspard Hauser had expected the enemy scouts to be further behind the Rumpler, so he misjudged his turn.

Half Pint in the Snipe exchanged fire with Slobomir Kraijnc in the back seat of the Rumpler. 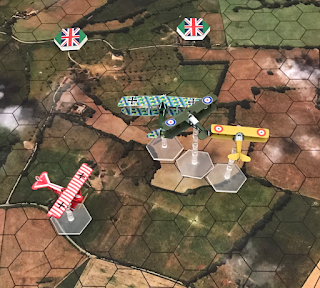 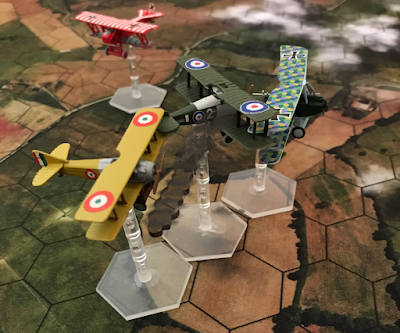 ”Dickie”von Salzbach turned the Rumpler towards the left-hand ammo dump and prepared to hold it straight and level on the run-in to give the best chance of hitting.

Half Pint in the Snipe followed after the Rumpler.

Gaspard Hauser turned his Fokker D.VII in behind the Rumpler to protect it and ended up tailing the Snipe.

Lacourt in the SPAD flew straight ahead, still not having fired a shot in the dogfight.

Half Pint opened fire on the Rumpler, he could see his bullets hit the tailplane, the Rumpler would have trouble turning left. The Rumpler was so badly damaged that it was a miracle that it was still in the air.

Slobomir Kraijnc in the back seat of the Rumpler returned fire. 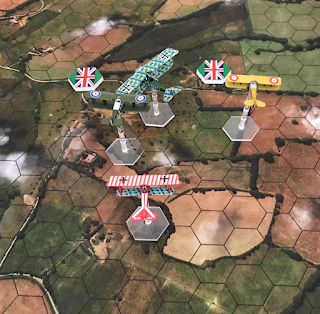 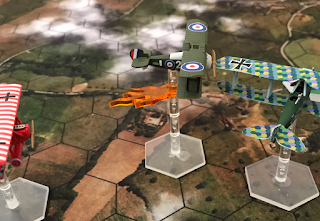 With his Sopwith Snipe full of holes, and flames shooting out from the engine, Half Pint turned away from the dogfight and headed for home.

Gaspard Hauser turned his Fokker D.VII in behind the Rumpler still trying protect it while attempting to un-jam his machine-guns.

Alphonse Lacourt in the SPAD now finally entered the fight. With his only machine gun burst of the day, he put the final nail in the Rumpler's coffin and it started to spiral downwards. Despite this, Slobomir Kraijnc heroically returned fire damaging the SPAD and wounding Lacourt. 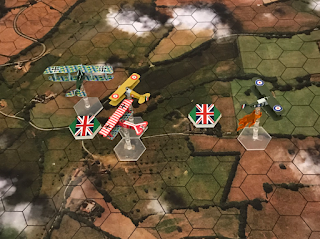 Freiherr Friedrich ”Dickie”von Salzbach tried to pull the Rumpler out of the spin, but it was to badly damaged that he couldn't succeed leading to the inevitable result that he and Slobomir Kraijnc were killed when the Rumpler plummeted into the ground next to the still exploding ammo dump. 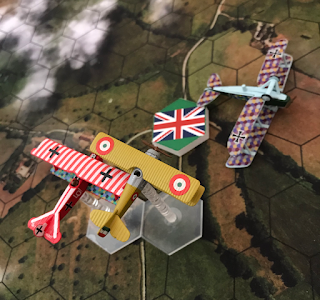 Gaspard Hauser circled his Fokker D.VII while un-jamming his machine guns in preparation to take on the SPAD.

Having shot down the Rumpler, the wounded Alphonse Lacourt turned his SPAD for home and using his superior speed he left the dogfight.

Half Pint managed somehow to extinguish the fire in his engine and miraculously returned to his aerodrome where he landed safely in his singed and bullet-hole ridden Snipe [only one damage point remaining].

Even Gaspard Hauser returned safely to his aerodrome, where he claimed the flaming Snipe as a kill.