A Fantasy Adventure – Act 13b.

This is the second instalment of a fantasy dungeon crawl taking place in a labyrinth beneath the city. It uses dungeon tiles from DMB Games and the Swords and Wizardry “Old School D&D” rules.

Having fled from the trolls, the party then decided to rest up in this room, and try to recover from their wounds and regain their strength. Midnight came and went while Bathenwells and Gimlit were on watch; Bathenwells watching the single door and Gimlit the double.

In the early hours of the morning, the single door burst open and in charged the four trolls. 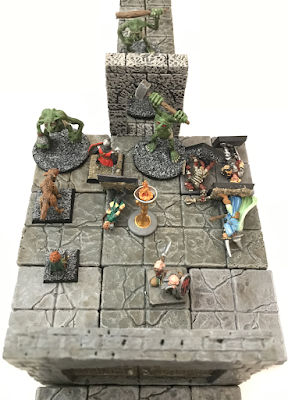 The fight was desperate. The party did much damage but the trolls regenerated and healed themselves every turn. Gimlit, Bathenwells and Fido killed the first troll and then they turned to help their comrades. But they forgot that the troll would regenerate, and it jumped up behind them.

When Wildbladder, Kobbe and Kranoval killed the next troll, Kobbe was surprising clever (or perhaps just wise in the ways of the underdark) and used the flames from his torch to stop it from regenerating.

Eventually the party killed all four trolls and burned them quickly using oil.

The party then preceded through the double doors to the room where they knew the trolls lived. The searched the room and found gems to the value of 600 gp and a small chest. Frito examined the chest and determined that it was trapped but that he couldn't disarm it. There were runes decorating the chest that none of the party could understand, but Bahenwells was sure that they were clerical in nature. 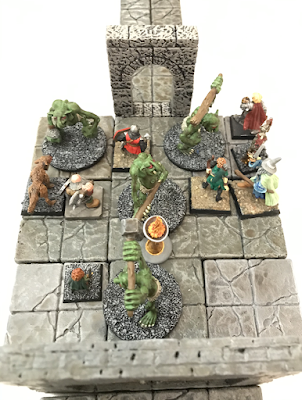 The party left the Trolls' lair by another door. The passageway passed through numerous archways and the party traversed many crossroads and T-junctions. It came to a small square opening from which a bridge spanned a slime filled pool.

Gimlit and Belwina crossed the bridge and came under fire from crossbow bolts from the flanks. They rushed over the bridge and were med by four Dark Dwarfs. Gimlit failed to recognise them as his evil cousins, and tried to start a conservation. 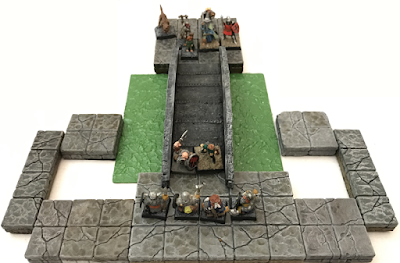 The Dark Dwarfs were not impressed by Gimlit's oratory skills, and went immediately to the attack. 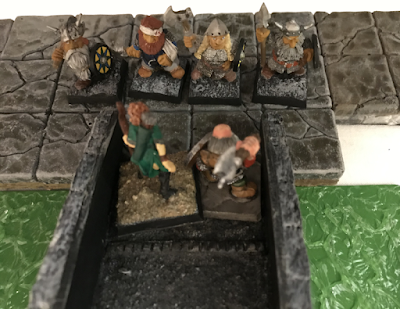 With the fight in full swing, Frito rushed over the bridge, dodging the crossbow bolts thanks to his height (or lack thereof). He pulled out his Silver Horn of Valhalla and blew 3 long clear notes. Five berserk warriors appeared behind the Dark Dwarfs and went to the attack. 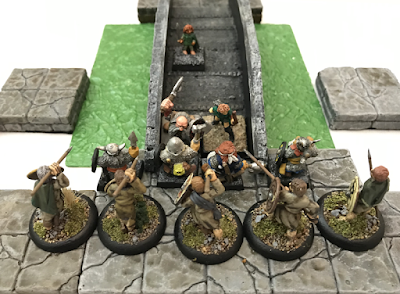 With the Dark Dwarfs defeated, the party searched their lair. Among their goods was found coins to the value of 800 gp and an exceptional gold statue of a naked young woman.

The party then left the labyrinth via a secret door they found in the Dwarfs' room and returned to the ground level of the City.