A Fantasy Adventure – Act 13a.

In exchange for resurrecting a party member, the party had promised to help the Temple of Freya by going on a quest. When they again met the High Preistess Völva she explained, "A thief has stolen a golden statue depicting the goddess Freya from one of the temple buildings. A priest and 3 acolytes chased after him but the thief lost them when he entered a labyrinth under the city." She asked the party to enter the labyrinth and retrieve the statue.

Following her directions, the party proceeded to the labyrinth. They entered a 10ft wide passageway and noticed that it was especially dark and the light from the torch was not bright. The passageway continued, it passed through numerous archways and the party traversed many crossroads and T-junctions.

The party then came to a T junction where the passageways were now only 5ft wide. The Bishop of Bathenwells became suspicious and suggested to Belwina that she act as rearguard as the rest of the party explored in one direction.

As the party explored, Belwina was attacked by a Carrion Crawler. Belwina fought bravely but was paralysed by the Carion Crawler's tenticles.

The party came rushing back to help Belwina with Bathenwells in the fore, while Fido "blinked" and attacked the Carrion Crawler from behind.

Having dispatched the Carrion Crawler, the party continued on past many archways and crossroads. The observant Belwina notice a semi-transparent cube slowing sloshing towards the party. They beat a hasty retreat leaving the cube safely behind them.

The party continued on through the labyrinth past many archways and crossroads, when all of a sudden they were ambushed by two Minotaurs. It was a hard fight but the Minotaurs were eventually defeated. 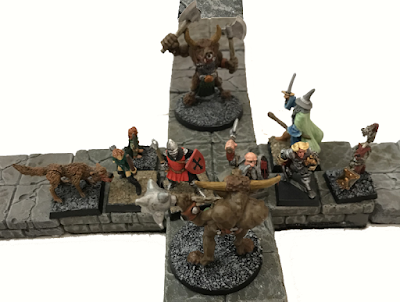 The party continued on through the labyrinth past many archways and crossroads, and then came upon a doorway. Frito opened the door and they entered a 30ft square room with a double door opposite. In the middle of the room was a brazier that burned fiercely and along the walls were 6 unlit candles in different colours; red, orange, yellow, green, blue and violet. Unsure what to do with the candles, the party tried to force the double doors but without success. So instead they decided to light the candles starting with yellow. When all six were lit, the single door shut with a bang, the doubles doors opened, and out flew a swarm of locusts which attacked the party. 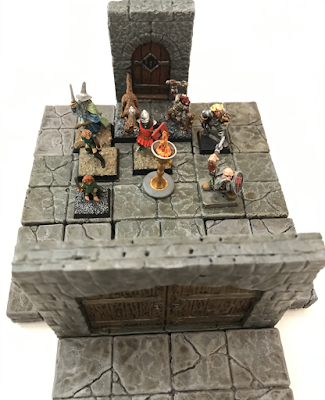 The party entered through the double doors into a smaller room, and examined the room while still under attack from the locust swarm. Gimlit noticed that the far wall was made to move but he was unsure how it worked.

The party checked for magic and it was determined that the wall, both doors, the locusts, the brazier and the candles were all magic. Kranoval dispelled the magic of the wall but noting was seen to visibly change. Using brute strength, the party lifted up the wall, while still being attacked by the locusts. 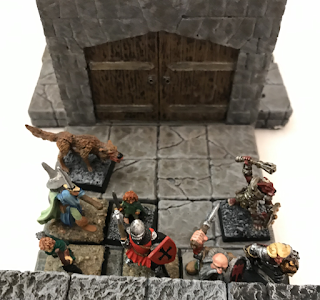 The party saw that the space behind the wall contained 4 trolls. 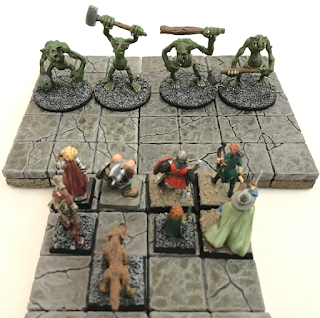 Frito blew his Silver Horn of Valhalla and 3 fighters appeared to challenge the trolls. The party decided that these would be a good rearguard and the fled back into the room with the brazier. 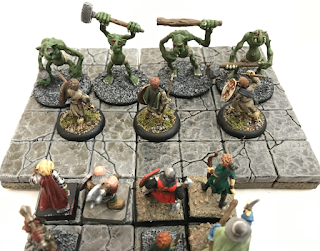 Having fled from the trolls, the party snuffed out all the candles which caused the locusts to disappear and the doubled doors to slam shut with a bang and a click.

They then decided to rest up in this room, and try to recover from their wounds and regain their strength.