While Frito, Wildbladder and Kobbe were recuperating in the temple, the rest of the party went out into the city in search of help for Fido. First they stopped at the city's Animal Care and Training centre but they didn't seem to trust Natanah the druid's offer to do her best.

After some searching they came upon a simple stone building that housed a small temple to Solanus. They entered the temple and talked with Father Beamus, He would resurrect Fido for a reasonable price, if the party would investigate the Temple of Jamboor in the Slum Quarter when he suspected the High Priestess Elan of wrongdoing.

The party scouted the temple and came to the conclusion that Father Beamus was right, there was something fishy going on. The temple was filled with beggars that the clerics treated like slaves. However the High Priestess had noticed the party and their spell casting, and she tasked a gang of thugs led by a master thief to watch the party and eliminated them if they returned to the Slum Quarter.

The party picked up Wildbladder and Frito from the Temple of Freya and returned to the Slum Quarter after dark so as to avoid the city watch, but unbeknown to them they were shadowed by the thugs who had prepared an ambush.

The party moved slowly through the dark streets of the Slum Quarter with Wildbladder and Frito in the lead, followed by Gimlit and Belwina, with Bathenwells and Kranoval bringing up the rear. Bethenwells felt something disappear from his backpack, and as he turned around an arrow hit him in the chest but bounced of his armour. A second later a hail of arrows flew out from the rooftops hitting each party member and the gang released half a dozen giant rats to distract the party. 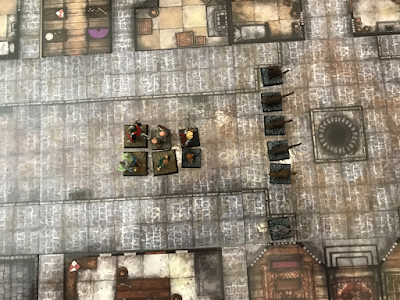 The party quickly dispatched the annoying rats, but still the arrows flew down from the unseen thugs on the rooftops. Bathenwells scanned all the alleyways but couldn't see the bowmen. 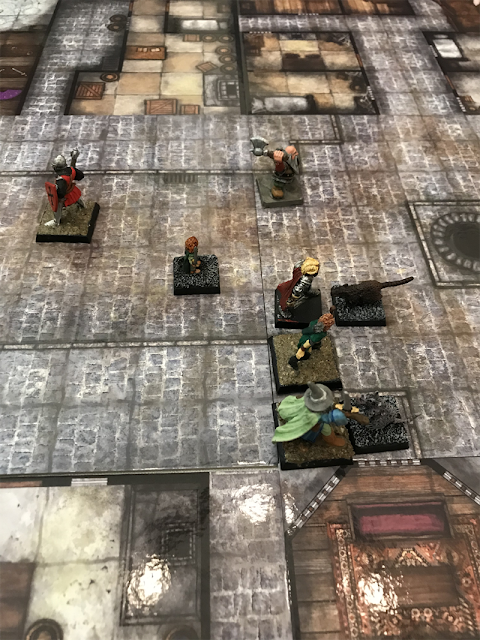 Bathenwells kicked down the door of the nearest house and rushed in. Frito spotted 3 thugs with bows on the rooftops. Six thugs rushed out of the darkness to attack the party as arrows continued to rain down from above. 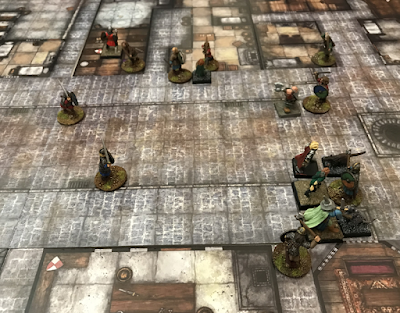 Bathenwells found stairs leading up to the roof. Frito climbed up the wall of a house to reach the roof. The rest of the party fought off the thugs on the street. The thugs were not brave, and having taken too many losses, they remainder disappeared back into the darkness of the Slum Quarter.

The party continued on to the Temple of Jamboor. There they quickly killed the four guards on duty at the entrance. They went down into the cellar when they found the kitchen and mess hall and storage areas. They also found a locked door behind which was a flight of stairs going down deeper.

At the bottom of the stairs was a passageway and a small alcove on the right hand side. Frito and Gimlit examined the alcove and determined that the floor was made to move; so they didn't go into the alcove believing it to be some sort of trap. 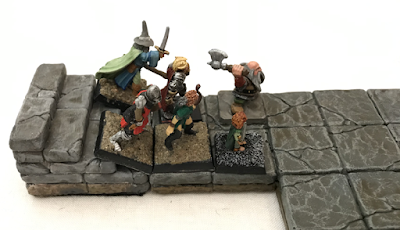 The party came to a door which Gimlit tried to kick in, but it was so heavy that he needed three attempts. As the door finally flew open, the party was met by the forewarned occupants, a row of 4 guards and 2 Acolytes behind which stood the High Priestess Elan. Behind the High Priestess was a shrine to Da-Jin the chaotic God of Death. The party rushed forward to attack.

Standing in a pentagram, in safety behind her minions, the High Priestess waved her hands in a intricate pattern and the party heard a creaking noise coming from the alcove they had just passed. 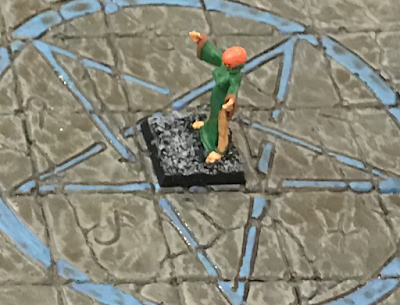 Frito reacted quickly, and turned towards the creaking sound. Out of the alcove came a Flesh Golem and attacked.

Kranoval shot a lightning bolt at the High Priestess which even passed through her minions doing great damage. He then fled forwards into the shrine, to escape from the Golem. 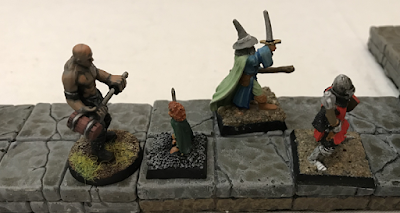 The guards were defeated, but the High Priestess and her two Acolytes continued to fight ferociously.

The High Priestess and one Acolyte were killed. The far end of the shrine was filled with darkness, and when it was dispelled with light, the last Acolyte has disappeared.

The Golem entered the room pursuing the retreating Frito and Bathenwells, here he was met by Gimlit and Belwina who stopped his advance. The rest of the party rushed to their aid and the Golem was slain. 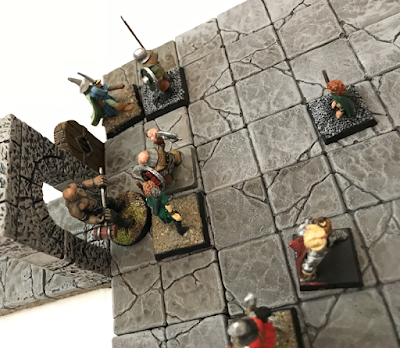 The party searched the room and the bodies of the Golem, the High Priestess and the Acolyte. The golem had a large ruby in it forehead worth 200 gp. They found that the High Priestess was wearing a thin gleaming coat of chain mail under her robes, probably of dwarfen origin.

A secret door led into a small office where the temples accounts were kept. Here they found a strongbox containing 600 gp.

In a secret compartment under the shrine, they found a Horn of Valhalla which when sounded by a warrior will summon berserk fighters to defend him. There was also a potion and a scroll.

They searched the High Priestess's and the Acolyte's quarters where they found items worth another 200 gp.

The party freed the temples slaves and then left, going into the night, laden with the temple's treasures.

The resurrection of Fido had been troublesome, a normal Raise Dead spell didn't work work on him so the Temple of Solanus had to combine it with a Reincarnation spell. Thus he came back to life, not as a dog, but as a Blink Dog.

The raising of Kobbe was extra difficult as this was his second time and it is possible the the Goddess Freya herself had to intervene. In such a way he was blessed with the capabilities of a paladin. When Kobbe arrived at the Inn, escorted by two of the temples acolytes he looked fit and well and his skin was glowing. Kobbe explained that he will accompany the party but they may not use him as sacrificial bait any more and that they must buy him new leather armour and a shield. Also he wants a reasonable share of the gold, most of which he will donate to the temple that has just raised him from the dead.