This is the seventeenth scenario in a Battle of Britain campaign that follows the exploits of the fictitious Country of Dampshire 369 Squadron Auxiliary Air Force. We use the Wings of Glory WW2 rules, slightly modified to give faster play, together with our own set of campaign rules. We use the Wings of Glory planes where the right model is available, other manufactures are used to fill in the gaps.

Blenheim bomber squadrons operated throughout the Battle of Britain to take the war to the Germans, often taking heavy casualties, they were never accorded the publicity of the fighter squadrons.

During the Battle of Britain, a Blenheim Mk IV of 82 Squadron became the first RAF aircraft to sink a U-boat, having scored two direct hits on U-31 in the Schillig Roads, just of the German coast west of Hamburg. 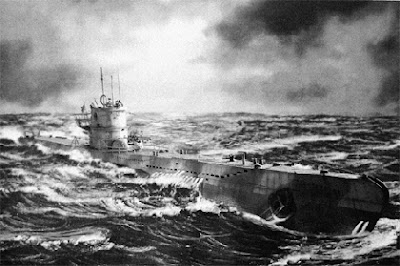 Sir Price and Fitter Walker were covered in mud when they returned to the airfield; in the back of the shooting-brake were the cannons from Cholmondeley Featherstonehaugh's crashed fighter.

Cholmondeley, who had been earlier dropped of by a Rolls Royce, was there to meet them. "Your friends in the Navy called Old Chap", he explained to Sir Price, "They want us to shoot down a submarine tomorrow morning, the silly buggers".

Sir Price promised to ring and clear things up, just as soon as he'd got Walker started mounting the cannons.

Next morning everyone was up early and now crossing the coat towards Germany on a sub hunting mission. Sir Price with his mounted cannons and Cholmondeley Featherstonehaugh in their Spitfire Mk IIs were escorting two Bristol Blenheim Mk IVs flown by Pilot Officers John ”Banger” Walls and Brett Sinclair.

Oberleutnant Freiherr C.G.Sommarlath and Leutnant Hermann von Trapp were flying air cover over the departing submarine in their Messerschmitt 109 E-4s. They were flying in tight formation when they spotted the British and headed straight for Sir Price who was nearest. 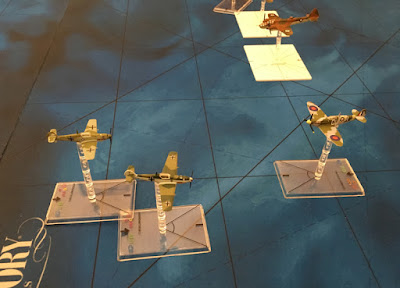 The two Blenheims had spotted the surfaced submarine on its way out of port and headed straight towards it. After exchanging shots with Sir Price, the Messerschmitts turned towards the Blenheims who were obviously their main target. Cholmondeley turned to engage the Messerschmitts. 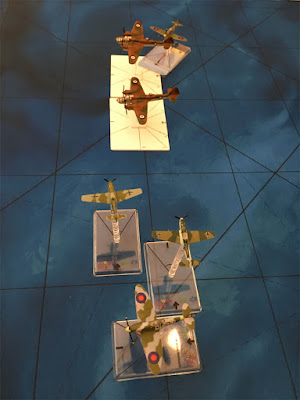 As the Messerschmitts turned to open fire on the Blenheims from behind, they were attacked by Cholmondeley. Sir Price turned sharply and was heading back into the fray. 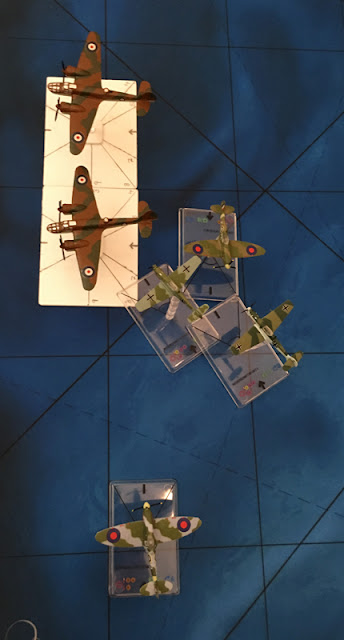 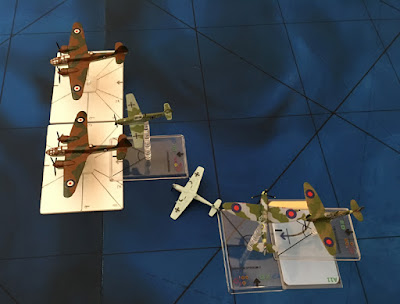 "What Ho" said Cholmondeley. "Tally Ho" said Sir Price. They both opened fire on the remaining Messerschmitt as did the gunners in the turrets of the Blenheims. 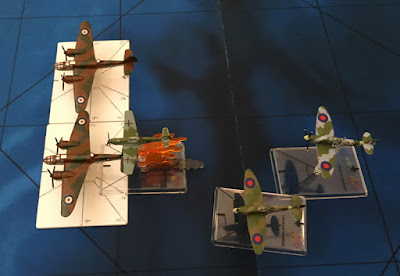 Rauch said Leutnant Hermann von Trapp as he saw smoke starting to pour out of the engine.
Flammen, Mein Gott! he exclaimed as fire engulfed his engine.
Flammen, Scheiße! he shouted as flames shot out of his reserve tank.
Nicht mein Schnaps auch he screamed as the bottle of schnapps in his trouser pocket exploded in flames.

Never seen the like of it in one game turn! The plane exploded in a ball of fire. 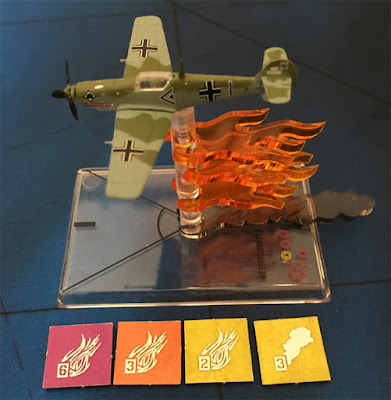 Now untroubled by attacking fighters, the two Blenheims continued with their bomb run and sent the submarine to the bottom. 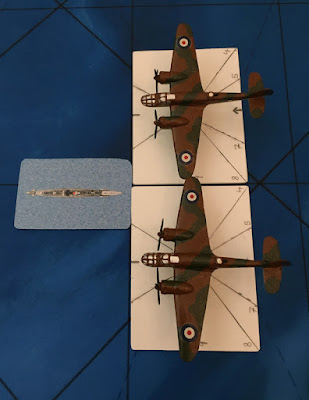 Freiherr C.G.Sommarlath baled-out and was picked up by the kriegsmarine.