This is the second of two scenarios to refight the campaign of Germanicus against the Germanic tribes. This scenario was AC27, an unofficial scenario written by Alessandro Crespi and available on commansandcolors.net.

The Battle of Idistaviso is also known as the Battle of the Weser River and sometimes as the first Battle of Minden. It was fought in 16 AD between the Roman legions commanded by Germanicus (the adopted son and heir if the Emperor Tiberius) and an alliance of Germanic tribes commanded by Arminius. Additionally the Chauci, a Germanic tribe, fought for Romans as auxiliaries.

Ancient sources identify the location as Idistaviso, but the precise location is unknown, save that it was on the right side of the Weser River, somewhere up between the cities of Minden and Hameln of present-day Germany. The battle marked the end of a three-year campaign by Germanicus to restore the Roman frontier at the Elbe that had been lost in 9 AD. The Germanic tribes generally avoided open large-scale combat, but at this battle Germanicus was finally able to force them into a major engagement.

Both sides suffered severe losses, but the Romans were victorious. Arminius and his uncle Inguiomer were wounded in the battle, but both evaded capture. The retreating Germanic army was cut down in every quarter. Many, attempting to swim across the Weser, died from a storm of projectiles or by the force of the current. Many others climbed to the tops of trees, and while they were hiding in the branches, the Romans called upon archers to shoot them down.

Germanicus had to withdraw behind the Rhine for the winter once again. Tiberius saw no point in continuing the costly military campaigns in northern Germania and ordered Germanicus to end his campaign and return to Rome. Germanicus was granted a triumph in 17 AD. After this, Rome never again made a serious effort to conquer Germania beyond the River Rhine. 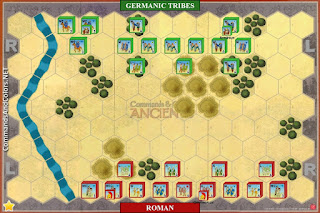 The Battle started with the light troops of both sides skirmishing in the centre. The Romans advanced in the hope of taking the hilly terrain but the barbarians got there first. There were few losses, but the Romans were outnumbered. 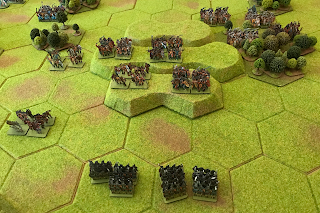 In the centre, the Romans took losses from the enemies' javelins and their auxilia retired. But they were rallied and advanced into the fray again. 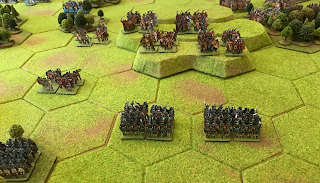 A great contest of javelin skirmishing ensued. The sky turned dark with the javelins, initiated by the barbarians but counterattacked by the Romans. The Romans came off the best from the exchange. 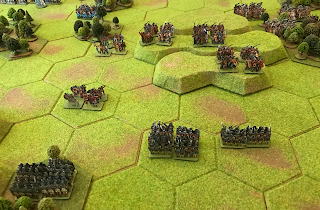 After more skirmishing from both sides, the Roman centre took the initiative and advanced towards the barbarians on the hills. 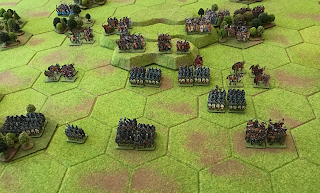 The Germanic leader, seeing the perilous situation, took direct command of the four units around him and charged straight into the Romans. 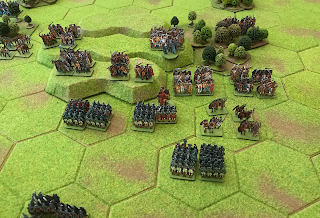 One unit of Roman heavy infantry was pushed back with casualties, while the second unit under the command of Germanicus himself was wiped out, Germanicus being carried of the field seriously wounded and unable to continue in command. The light infantry evaded the charging barbarians. 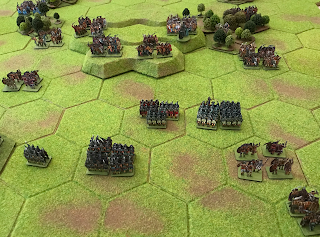 In the centre, the Romans were suffering from the javelins thrown by the barbarians. 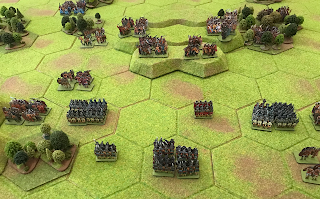 So they sent forward a unit of legionaries and one of Chauci warrior auxiliaries to attack the barbarians. 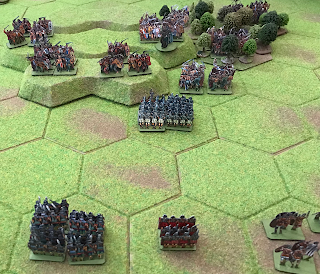 But the fight was indecisive, both sides taking fairly heavy losses. 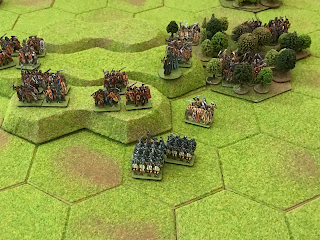 Arminius ordered forward a fresh unit of his warriors, they demolished the Chauci auxiliaries, and charged right through them into the legionaries behind. 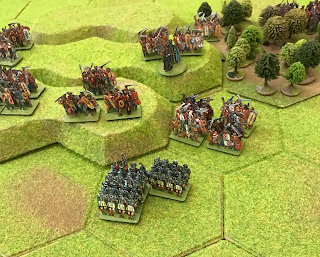 The legionaries retreated without loss. However the Roman immediately brought forward more reinforcements to build a battle line against the barbarians. 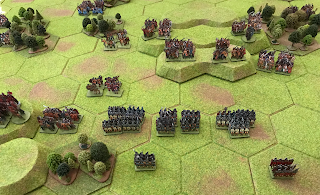 As the Roman centre looked impenetrable, Arminius ordered his three units of cavalry to charge the enemy's left flank. 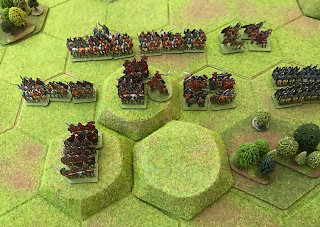 One unit of Germanic cavalry, fled from the fight, while the other two wiped out one unit of Roman cavalry, severely damaged another as well as almost destroying a unit of Chauci warrior auxiliaries. 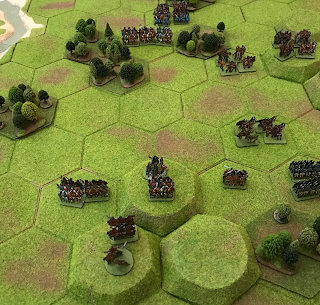 The Romans tried to shore up their left flank. The Chauci warrior auxiliaries attacked the unit on the hill, wiping them out and causing their commander to flee into the forest to his rear. The Roman cavalry then attacked the remaining enemy cavalry unit, causing 50% losses but were then themselves pushed back. 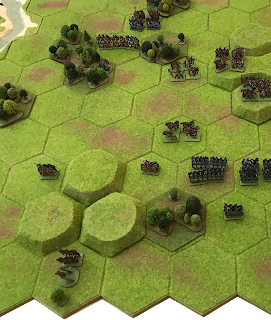 The barbarians then continued the cavalry charge again. They brought up both the cavalry and the leader that had previously fled. 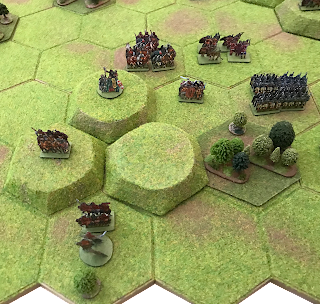 The cavalry slaughtered the Chauci warrior auxiliaries, they charged straight through and over the hill where they fell on the remaining understrength Roman medium cavalry and its leader. 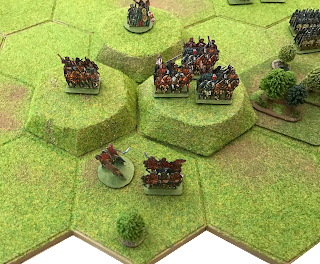 The Roman medium cavalry and its leader were destroyed. Seeing their flank destroyed, the Roman army lost heart and retired from the field of battle.

Arminius celebrated his victory, by drinking Roman Falernum wine, part of the spoils discovered in a tent previously belonging to a Roman general.