Army HQ has tasked your squadron to pick up a spy with critical information from behind enemy lines. The spy is hiding out in a Belgium farm to escape the German troops that are out hunting. Your squadron must perform the pick-up at midday from the meadow next to the farmyard.

Army HQ has provided a brand new two-seater Bristol F.2B Fighter (perhaps the first one to arrive in France) for the operation because it is must faster than the DH.4 two-seaters that the squadron is otherwise equipped with. The Brisfit has two forward-firing Vickers machine guns and one Lewis gun in the observer's cockpit. The Brisfit will fly without its normal observer in the back seat in order to make room for the spy.

Lieutenant William Algernon "Billy the Bishop" Tempest bravely volunteers to fly the pick-up in the Brisfit and his friend Lieutenant Terence “the Rook” Turner, flying his Sopwith Camel, will escort Billy. They take off from their aerodrome in good time before noon and head towards the front lines. When crossing the German trenches, they are spotted and an officer telephones to the nearest airfield from which two Fokker D.VII scouts are sent up to intercept.

Special rule:
When the Brisfit’s back seat is occupied by the spy, the Lewis gun counts as being fired by a novice. It may not use aimed fire and if jammed will take an additional “jammed” counter. 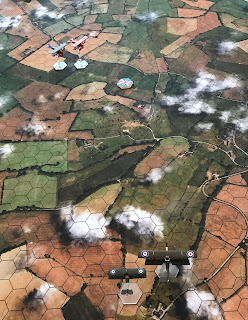 Turn 1:
The RFC pilots flew straight ahead as the two Fokkers turned towards them. 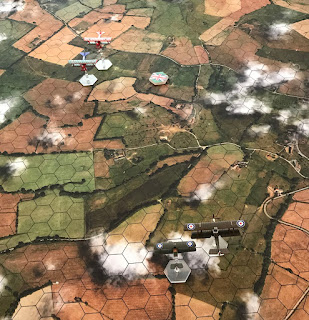 Turn 2:
The RFC pilots flew straight ahead as the two Fokkers side-slipped towards them. 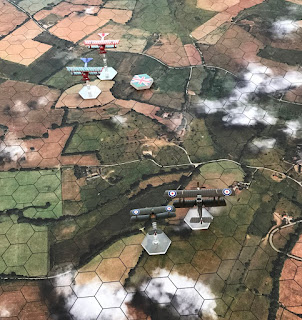 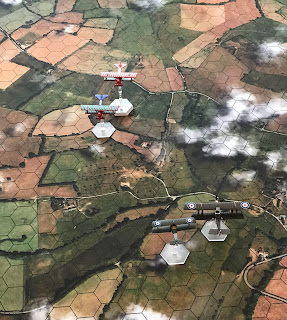 Turn 4:
The RFC pilots flew straight ahead as the two Fokkers side-slipped towards them. 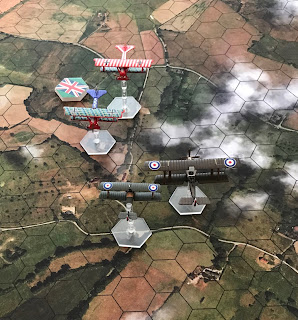 The planes opened fire on their opposite number at long range.

Flying his Sopwith Camel, it wasn't Lieutenant Terence “the Rook” Turner's day. After firing a short burst into the Blue Fokker, his machine-guns jammed, and in the silence he heard his engine starting to make strange and worrying noises. 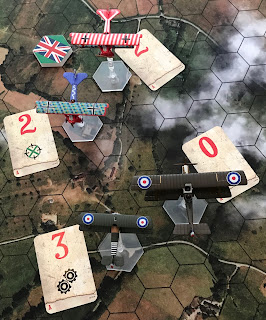 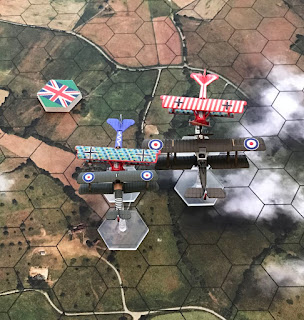 Lieutenant "Billy the Bishop" Tempest exchanged fire with the Red Fokker. The Blue Fokker opened fire on Terence “the Rook” Turner's Camel, tearing holes in the fuselage and wounding him. 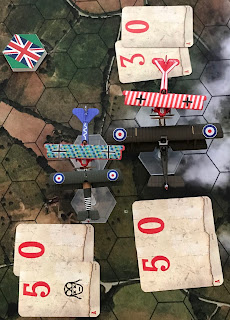 Turn 6:
Both Fokker's turned to their right as did Terence “the Rook” Turner who was try to get out of the fight while he unjammed his guns. Billy the Bishop turned the Brisfit towards the meadow. 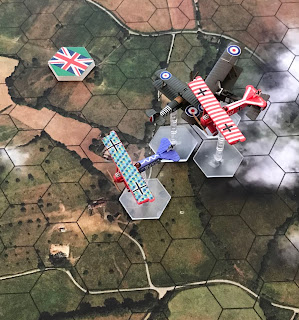 Turn 6:
Both Fokker's turned to their right. Terence “the Rook” Turner flew out of the fight while he unjammed his guns. Billy the Bishop in the Brisfit descended towards the meadow. 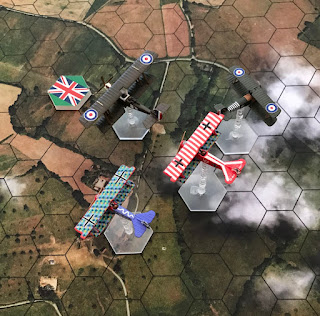 The Red Fokker was now on Billy the Bishop's tail, and open fire with a burst from his two Spandau machine-guns. Smoke started to pour out from the Brisfits engine. 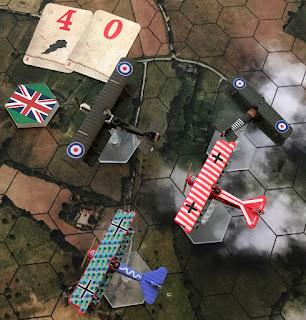 Turn 7:
Billy the Bishop in the Bristfit ignored the Fokker on his tail and continued with his run in to the meadow. Terence “the Rook” Turner flew out of the fight while he unjammed his guns. 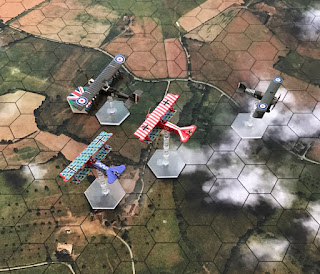 The Red Fokker opened fire on the Brisfit. 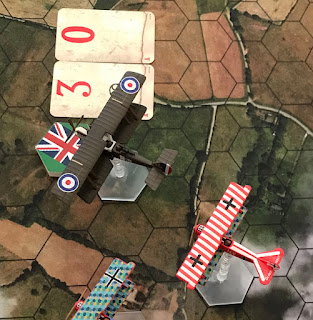 Turn 8:
With inches to spare, Billy crossed the hedgerow that marked the boundary of the meadow chased by the two Fokkers. Having unjammed his guns, Terrence turned his Camel back towards the fight. 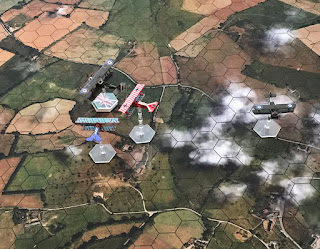 Both Fokkers opened fire. The Blue Fokker did little damage before its guns jammed, but the Red Fokker filled the Brisfit with holes and wounded Bill the Bishop. 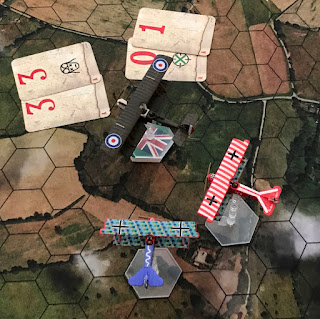 From a height of about 10 feet, the Brisfit crashed into the ground. 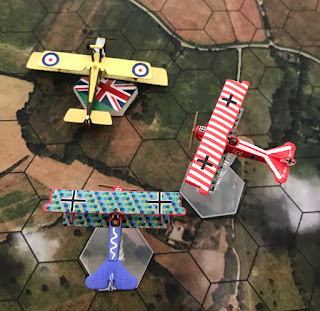 As the Brisfit crash-landed in the meadow, a nun came out from the hedgerow. The nun looked around carefully and then ran over to the Brisfit. She pulled Billy the Bishop out from the wreckage, through him over her shoulder in a fireman's carry, and disappeared in the direction of the farmhouse.

Flying in his shot-up Camel, Terence “the Rook” Turner saw the fate of his friend. Not wanting to face the two Fokkers, Terrence turned for home vowing to return to pick up both his friend and the spy.