This is an attempt to use Wings of Glory on a hex mat. We use hexes in order to simplify play over the Internet while staying isolated at home. Each aircraft has a number of different manoeuvres it can perform, but instead of being represented by arrows they are represented by hexes traversed. The R.E.8 was flying using my autopilot rules.

Army HQ is planning a large 3-day bombing raid on targets too far behind the lines for artillery fire to reach. They have ordered photo recce missions from a number of front-line squadrons to determine which targets to attack.

An R.A.F. R.E.8 is fitted with a camera. It will be piloted by Jonathan "Banger" Walls and Sidney Smythe will be the observer, photographer and rear-gunner. St John Somerset and Mathew Winterbottom will fly their Sopwith Camels as escorts.

Scenario rules: The goal is for the R.E.8 to make two passes over the target hex flying straight and level in order to take a photograph. The observer may make no other action that turn. Before making the second run, the observer must change the photographic plate, and on the turn this is done he may not perform any other action. The R.E.8 must exit its board edge to get back with the photographs.

The RFC pilots took off from their aerodrome, and with St John Somerset in the lead they headed towards their target. As they approached, the spotted two Hun Fokker D.VII scouts on patrol. 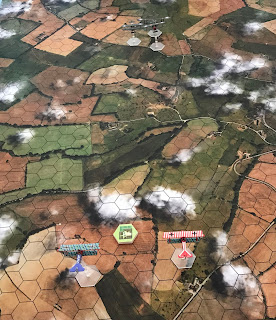 Turn 1:
Both Sopwith Camels started to accelerate ahead of the R.E.8. The two Fokkers closed up. 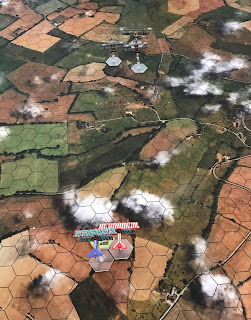 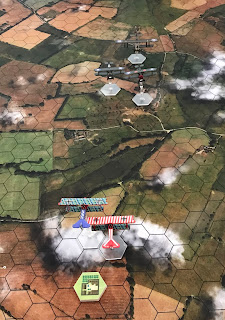 Turn 3:
The two pairs of scouts continued to close, as the R.E.8 started to line up with the target.

The scouts opened fire on each other at extreme range. 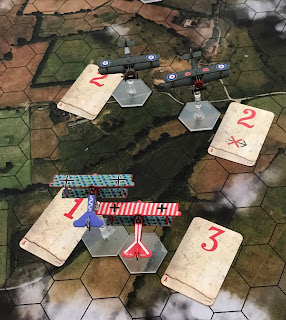 Turn 4:
The scouts started dogfighting as the R.E.8 turned back towards the target. 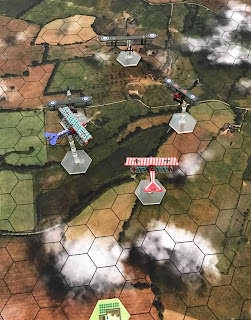 St John Somerset opened up with a burst of machine-gun fire into the Red Fokker which caught fire. Mathew Winterbottom fired into the Blue Fokker at close range, but his Vickers machine-guns jammed before he could do much damage. 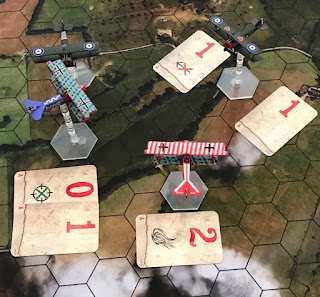 Turn 5:
Jonathan "Banger" Walls piloted the R.E.8 straight towards the target, seemingly ignorant of the dogfight going on in front of his nose.

Mathew Winterbottom turned his Camel gently to port, while all the time banging on his machine-guns with a hammer trying to unjam them.

The other three scouts all moved slowly ahead. 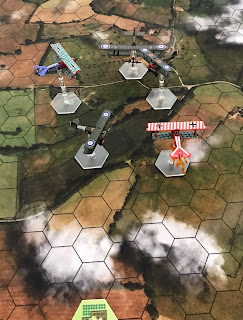 The flames shooting out of the Red Fokker were causing damage but it opened fire on St John Somerset at close range. St John fired at the Blue Fokker at long range doing little damage. The Blue Fokker fired at close range into the R.E.8, skilfully judging the angle so that neither the front nor the rear machine gun could target him. 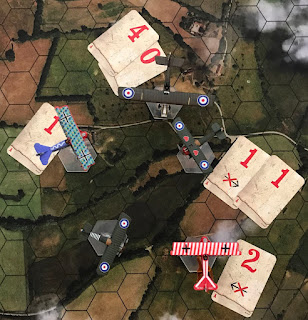 Turn 6:
With flames still shooting out from its engine, the Red Fokker turned onto the tail of St John Somerset's Camel, who turned to starboard to face the incoming Blue Fokker head on. The R.E.8 dodged to starboard, trying to shake off the Fokkers.

Mathew Winterbottom turned his  Camel gently to port, while all the time banging on his machine-guns with a hammer trying to unjam them. 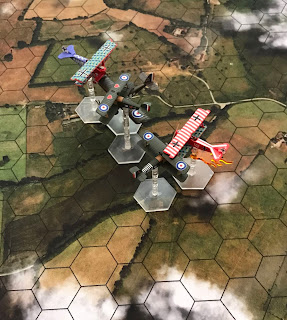 The flames shooting out of the Red Fokker were causing damage but it opened fire on St John Somerset. St John opened fire on the Blue Fokker which was firing at point blank range into the R.E.8.

Something was seriously wrong with St John Somerset's rudder, it had now jammed four times in a row. 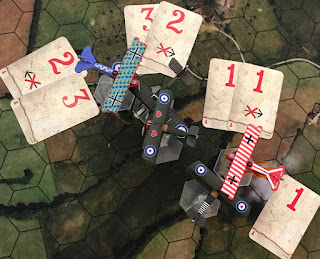 Turn 7:
Mathew Winterbottom turned his  Camel gently to port, while all the time banging on his machine-guns with a hammer trying to unjam them, this time he succeeded. 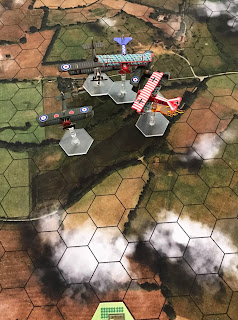 Winterbottom fired a burst of machine-gun fire into the Blue Fokker.

His guns jammed for a second time, but as he still had his hammer out, he hit them immediately and they started firing again. [Rules note: he actually just remembered that he had the Bullet Checker skill]. 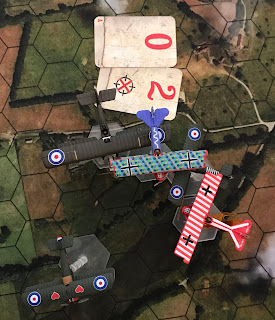 Turn 8:;
Mathew Winterbottom got onto the tail of the Red Fokker, The R.E.8 continued towards its target. St John Somerset, circled his bullet-ridden Camel, safely out of range of the Fokkers. 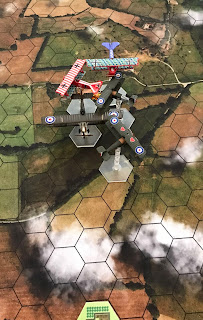 Mathew Winterbottom opened fire on the Red Fokker as Sidney Smythe from the back-seat of the R.E.8.

The Blue Fokker opened fire at close range on Winterbottom's Camel, but without any success. 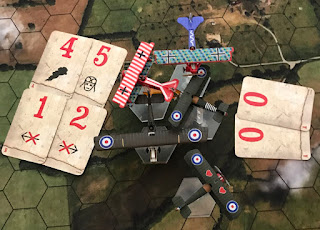 The Red Fokker couldn't take this sort of punishment! 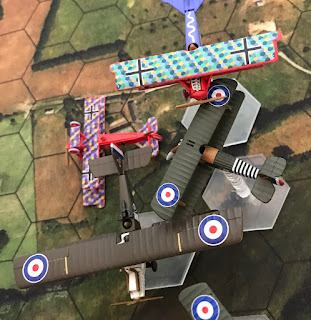 Turn 9:
Feeling badly outnumbered, the Blue Fokker tried to side-slip away, but Mathew Winterbottom followed after. 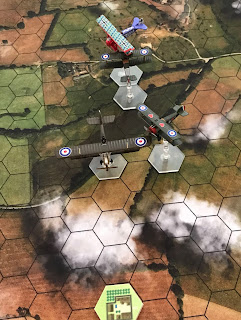 Winterbottom's first burst missed completely, but he adjusted his aim and his second burst had great effect. 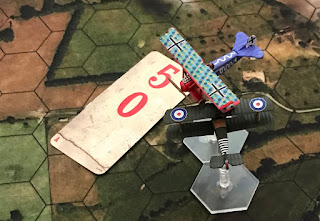 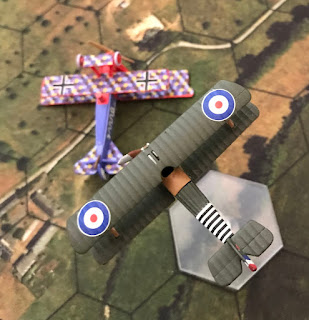 The two Sopwith Camel formed up behind the R.E.8 as Jonathan "Banger" Walls flew steadily over the target and Sidney Smythe photographed it. 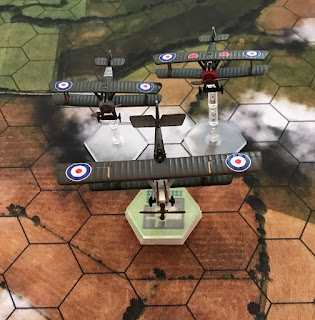 All three RFC planes returned safely to their aerodrome. The two photographic plates were quickly developed to provide Army HQ with the information they needed.

After landing, St John Somerset gave his mechanics a severe dressing down, they had not serviced his tailplane properly. The mechanics promised to use extra grease on St John's tail before his next sortie.