A Fantasy Adventure – Act 5b.

This is the second instalment of a fantasy adventure, the first part of which can be found here.

Having defeated the evil cleric, the party continues to explore the labyrinth under the temple.

In the lead were THE BISHOP OF BATHENWELLS (human cleric) and GIMLIT SON OF GROIN (dwarf fighter) closely followed by KRANOVAL (half-elf magic-user) and FRITO BUGGER (hobbit thief) behind who came FIDO (the dog) and BELWINA (human female ranger). Bringing up the rear was ST.JOHN WILDBLADDER III (human paladin). Following along behind were the two rescued farmers carrying MEPOO's body. 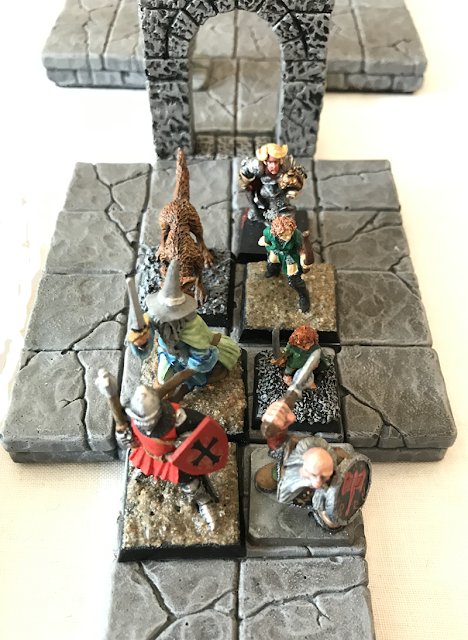 The party turns a corner and in front of them opens up a tomb. All around the walls of this room, there are niches containing skeletons. All of them wear rusting chain mail and carry notched swords and riven shields. 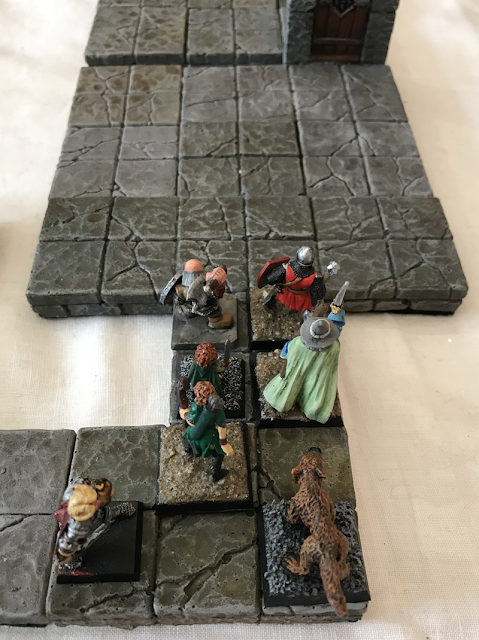 As the party enters, eight skeletons animate immediately and move to attack. The Bishop of Bathenwells decided not to waste his energy turning the skeletons, but to bash them instead! 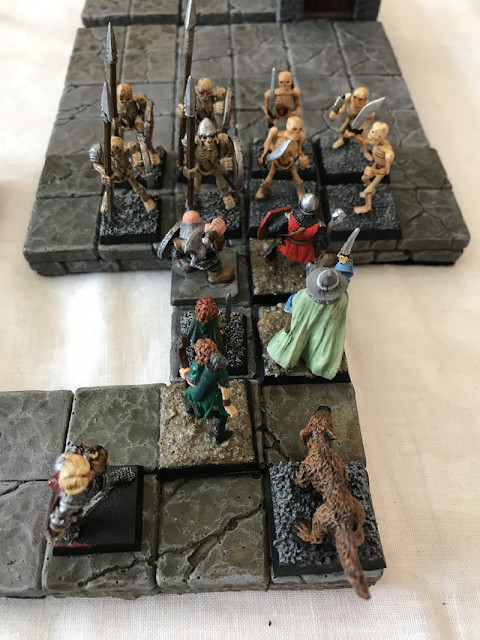 As the party fight off the skeletons, a second wave exits from the niches. Fido seems to go berserk at the sight of all the bones and chews the skeletons to bits. 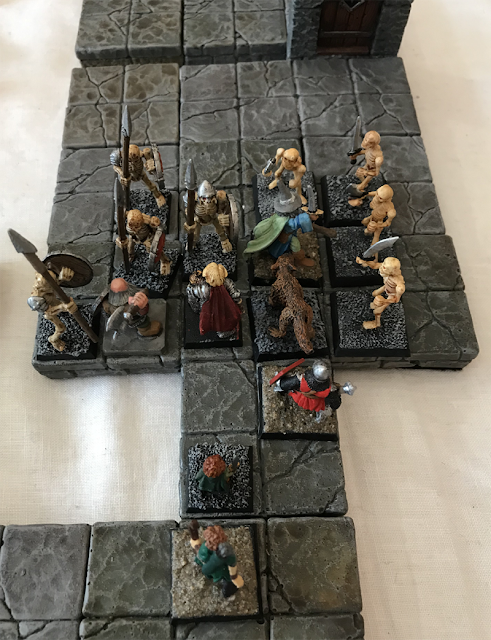 The party defeats the skeletons and searches the tomb and niches but finds nothing of value, except for Fido who picked up and rather nice femur.

Having listened at the door, the party enters the next room. Even this is a tomb with niches filled with skeletons, however they don't activate. On the far side of the room, flanking a doorway, are two stone statues of knights. 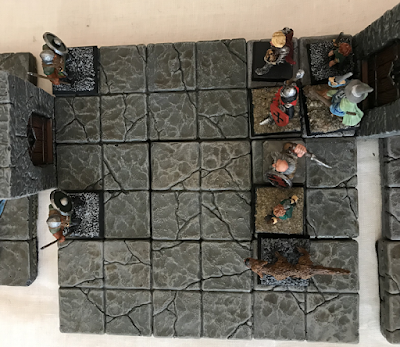 Fritto decides to creep in the shadows up to the door, but this causes the statues to activate. The party attack the statues. Belwina uses her long bow from a distance. The party defeats the statues after a hard struggle. They search the room, the niches and the skeletons. The find nothing of value, except for Fido who is spoilt for choice. They move on through the next door.

In the next room the walls are decorated with paintings showing the deeds of three paladins; a dwarf, a human and a human female. There are also three sarcophagi with engravings indicating that the belong to the three paladins.

Gimlit and St.John Wildbladder managed to push the heavy lid from the dwarf paladin's sarcophagus but in doing so set off a trap giving the both a nasty magic shock. Inside the sarcophagus they see a skeleton wearing rusty plate mail and holding a shiny Battle Axe. The dwarf grabbed the battle axe which he determined to be magical.

Fritto and the Bishop of Bathenwells open the sarcophagus belonging to the male paladin. Inside the sarcophagus they see a skeleton wearing rusty plate mail and holding a rusty sword. The bishop puts his arm in t rummage around and a scything blade slashes across the opening. After some trouble, Fritto manages to disable the blade but nothing of value is found.

Belwina and Kranoval open the sarcophagus belonging to the female paladin. Inside the sarcophagus they see a skeleton wearing rusty plate mail and holding a rusty sword as well as the remains of a now rotten longbow. They eagerly root around in the sarcophagus and find a hidden compartment. This they open releasing a poisonous gas; luckily not fatal. In the bottom of the compartment they find a beautiful pearl necklace which they guess has magical properties because it has lasted so well. 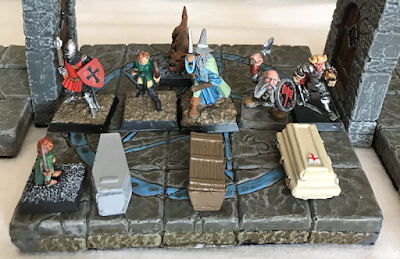 Having found nothing more of interest in the paladin room, Gimlit, Bathenwells, Fritto and Wildbladder kick in the door and go through into a small bare 15 foot square room. In the centre of the room stands a chest.

Fritto carefully checks for traps and finds none. Gimlit opens the chest and finds inside a stone sphere about 1 foot in diameter. This he picks up and examines. Being an expert in stonework, he thinks that this is the same workmanship as the pedestal in the temple above. That pedestal was two foot high with a concavity in the top shaped like a hemisphere which could contain exactly half of a one foot diameter sphere.

Let us return to the temple and see if my guess is correct says Gimlit. 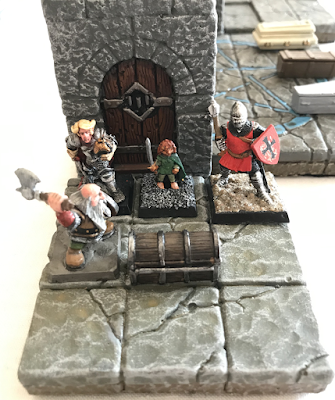 The party returns to the temple and Gimlit places the sphere onto the pedestal. It hovers above the concavity. There is a magical feeling in the air that the temple is being cleansed.

Around the neck of each party member appears an Amulet of Reward. They feel that the amulet will save them from one nasty event caused by chaos as a reward for cleansing the Lawful Globe Temple. 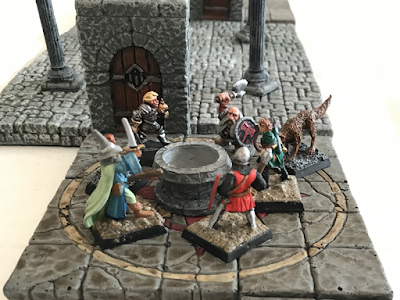 The party return to the village of Hillview where they are greeted with great happiness for rescuing the two farmers.

They go straight to the Temple of Law and meet the cleric Rehab who can already feel that the Globe Temple has reawakened. Rehab sees that the party have Amulets of Reward. He offers to replenish Bathenwalls supply of Holy Water and to heal Mepoo the kobold if the his left overnight.

The party goes to the Two Flagons to rest and recuperate. The next day Belwina goes to the Smithy/Armourer for a fitting of her Ring Mail.

They the visit the Temple of Law and find Rehab the cleric with a resurrected kobold, but now the kobold is lawful and has changed his name to Kobbe.

After a few days, when the party has recovered fully and Belwina has her new mail, they decide to leave and head for the big city. They purchase a pony from the stables to carry their treasure and their new supplies and equipment.