The farmer’s daughter was rescued and the party had been well feasted. The party got directions from the farmer; they were on the right road for the big city, but less than a week’s travel away by foot was a small village where they could get more supplies and equipment so they could make it on to the city without any problems. The party headed off in the direction pointed by the farmer.

The third day’s travel was coming to its end. As night was falling the Ranger spotted the glow of a camp fire off to the right. She pointed this out to the party who decided to investigate. The Ranger and the Hobbit moved stealthily towards the glow followed by Fido the dog.

When they came nearer the glow they could see 4 goblins around the camp fire cooking some meat on skewers.  Behind the camp fire was the entrance to a cave. The alert Ranger spotted two more goblins keeping watch from the shadows.

Frito the Hobbit and Fido sneaked behind one guard while Belwina attacked the other guard. At the same moment the rest of the party charged the goblins by the fire. One goblin fled into the cave while the others died fighting.

A quick search by the party found no treasure on the goblins. Fido sniffed at the meat on the skewers but turned up his nose in disgust.

The party entered the cave. The dwarf noticed that the floor is man-made while the walls and ceiling are natural features. At the back of the cave is a flight of steps going down. The steps and the passages are dimly lit by a fungus glowing on the roof.

With Gimlit the dwarf and Belwina the ranger in the leader the party rushed down the stair, just in time to see the goblin flee through a door on the right.

Belwina and Fido rushed in hoping to gain surprise, but the goblins therein were already prepared. Belwina cleared some space and Gimlit rushed in to help with his Battle Axe. 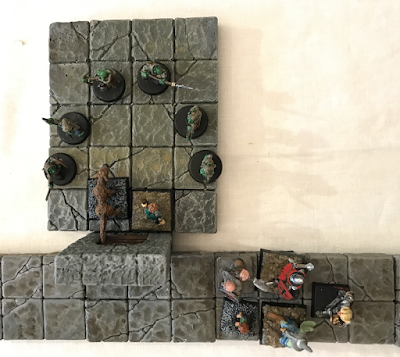 A search of the room revealed some treasure: 50sp and 200cp.

The party continued down the passage. There was another door and the passage turned left.

Gimlit kicked in the door and jumped in. He was in the Goblin's larder. Here there were 4 Giant Centipedes which the Goblins find very tasty. His comrades shouted that he shouldn't bother, but Gimlit sliced then up into small fillets with his Battle Axe. 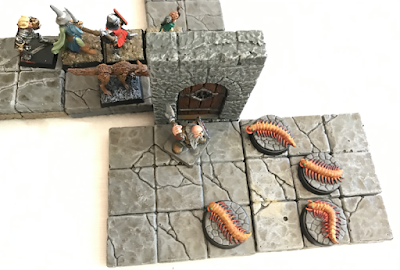 The passageway led to a rickety bridge. Being the lightest, Frito Bugger led the way followed by his dog Fido while the more heavily armoured members of the party watched from terra firma. 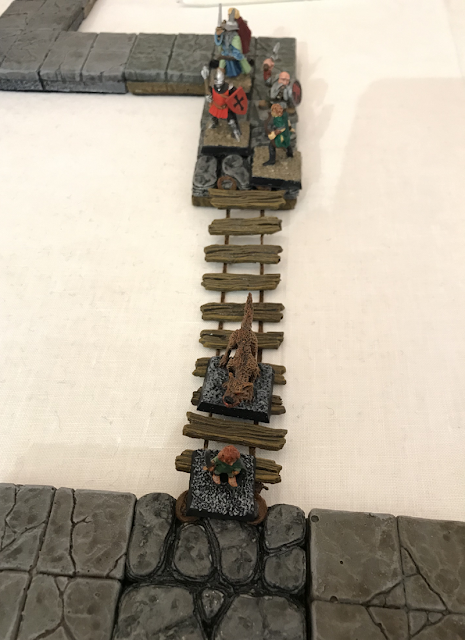 As they crossed the bridge, seven Goblin archers appeared and opened fire. As Frito and Fido kept the Goblins busy, Belwina opend fire with her long bow and the rest of the party rushed across the bridge to melee the Goblins.

Ignoring the side passage, the party moved straight ahead. When Gimlit and Belwina had passed by, a trap door opened to reveal a spiked pit. Fido bounded over the pit but Bathenwells didn't make the leap and fell into the pit trap,

While the party were trying to work out how to get Bathenwells out, a Carrion Crawler appeared from around the corner.

Gimlit and Fido hacked the Carrion Crawler into mincemeat. 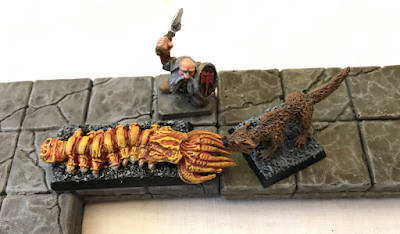 The rest of the party passed the pit trap with great care and they all continued down the corridor. After a while the corridor came to an end when it was blocked by a fall.

The party returned and took the side passage which led to a room full of mushrooms which the Goblins grow as food. The party declined to taste any mushroom and passed straight through. 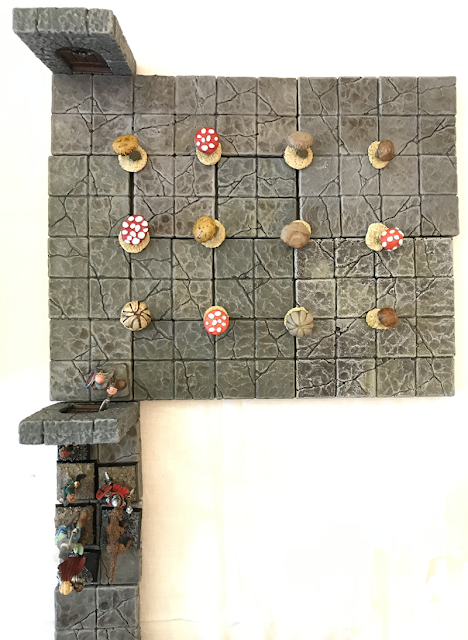 The passage turned left and on the right was a cell door. Gimlit kicked it in and entered followed by Fido. The cell contained a famished Kobold named MEEPO. Gimlit befriended Meepo with the help of food while Fido looked on snarling dangerously. 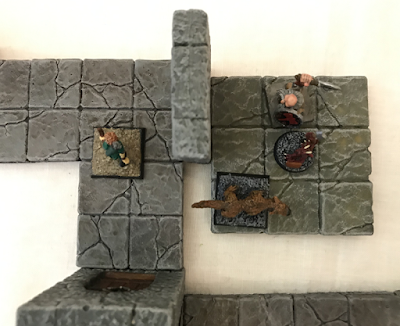 While the Dwarf and Kobold bonded, the rest of the party continued down the passage to the next door, behind which was the Goblins' armoury. The party rushed in and engaged the two Goblin armourers in close combat.

As Gimlit and Meepo passed by the room, Gimlit picked up some armour and weapons for Meepo to use. 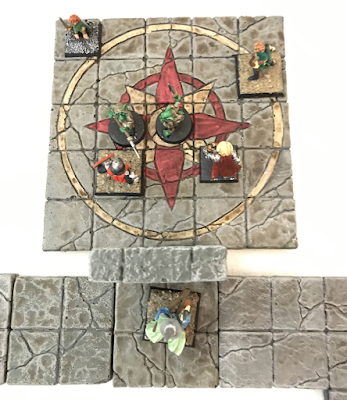 The party came to an archway leading to a feasting hall. They all passed through except for Kranoval the mage, Belwina the ranger and Meepo who stayed outside in safety.

The room contained 10 Goblins and a Goblin Shaman. Combat broke out. 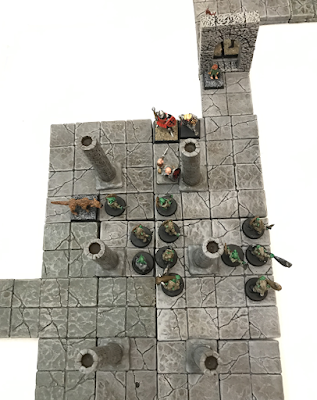 As combat continued, the Goblin Shaman cast a nasty spell and 6 Giant Rats surrounded the party. 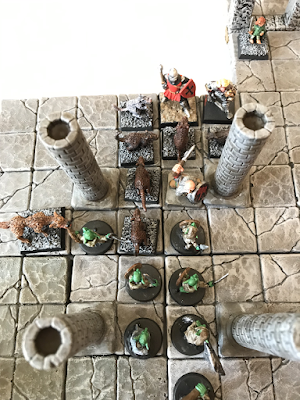 The noise of the combat brought the Goblin Princess with her Champion and Standard Bearer out from the throne room into the feasting hall.

The Goblin Princess had a jewelled necklace and a shiny sword. 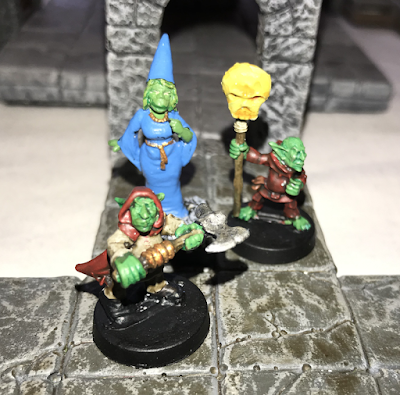 The Goblin Princess quickly negated Fido by her charm and he was soon licking her hand. 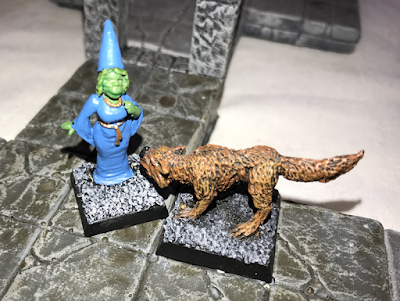 But with the help of ranged attacks from Kranoval and Belwina, the party was victorious!

Frito was first to the Princess; he claimed her magic sword and pocketed her necklace.

The party moved on into the throne room. 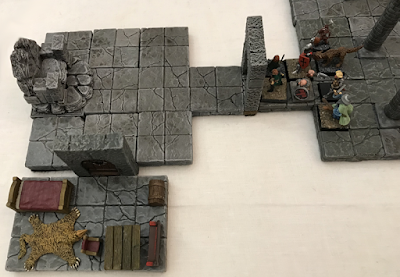 The throne room appeared to be empty, so Frito sneaked in looking for traps and secret passages. In a compartment under the throne he found a scroll of Magic Missile Lvl 5, a Silver Dagger, two Potions of Healing and a Potion of Haste. 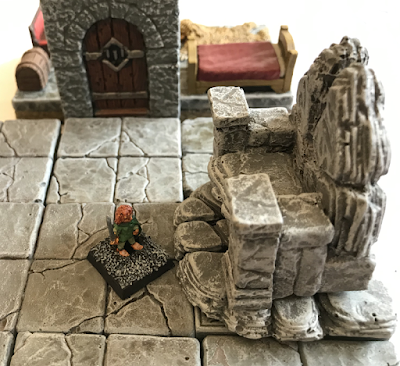 Frito the searched the bedroom. In the chest he found some rather extreme underwear and bags of coins worth 200 gp. The valuable Owlbear rug was left behind, probably too heavy to manage. 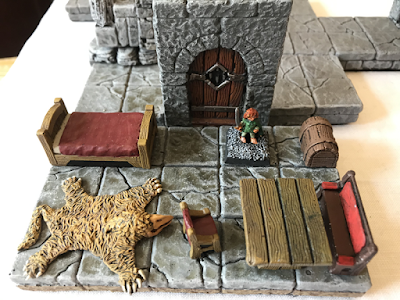 When the party entered the throne room, the dwarf noticed in the stonework that there was a secret passage behind the throne.

The party followed the secret passage. 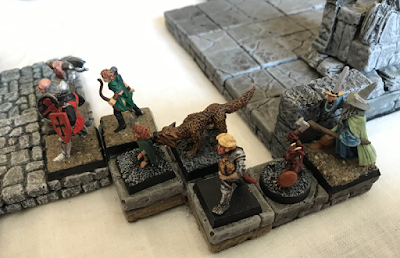 The party passed through the secret door and entered into a long hallway with 6 alcoves, 3 on each side. In each alcove was a skeleton and on the floor  a mass of bones and rusty equipment. The pile of bones rose up and formed skeletons. 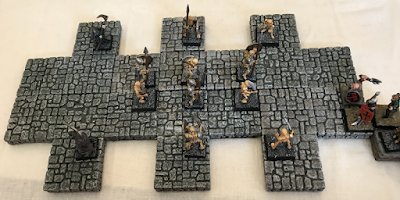 The Bishop of Bathenwells raised his holy symbol and cried out "Flee before the power of LAW, foul undead things of Chaos!" and the skeletons in front of him fled leaving just 4 to be dealt with.

The two skeletons in the furthest alcoves were clad in tattered robes, armed with scythes and had glowing red eyes. They looked especially nasty.

Gimlit took on two opponents but the touch of the Nasty Skeleton paralysed him. 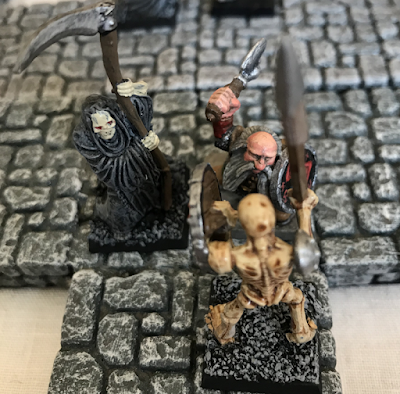 The Paladin, St John Wildbladder III, together with the fast moving Fido took on the remaining two opponents but the touch of the Nasty Skeleton paralysed Wildbladder. 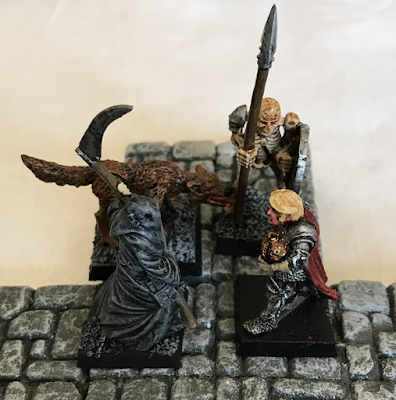 The rest of the party charged in, engaged the undead and rescued their comrades. 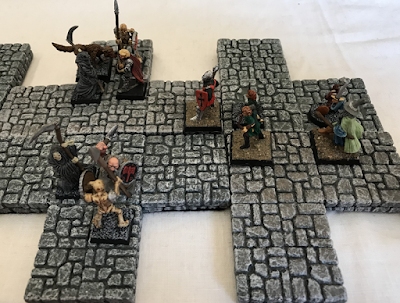 Poking carefully about in the remains of the skeletons, Bathenwells noticed that the glowing red eyes were made from rubies worth 75 gp each. These he pocketed.

Hidden behind the last alcove on the right was an archway leading into another room. In the centre was a sarcophagus. The party readied their weapons and then opened the sarcophagus expecting to find a mummy or wight. All it contained was a wand: a wand of lightning bolt which Kranoval quickly appropriated. 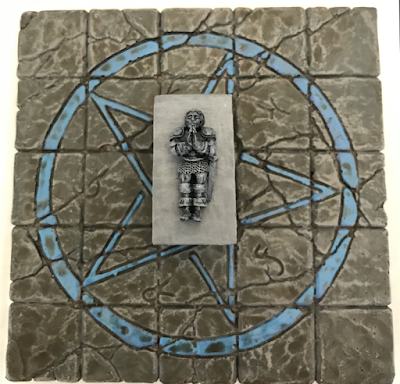 On the far side of the room was the back side of a secret door. The door led into a passage which went upwards and exited in some overgrown bushes.

Exhausted by their efforts, the party camped immediately for the night. The next day they continued their journey first to the village and thence to the big city.