This is the ninth scenario in a Battle for Malta campaign that follows the exploits of the Country of Dampshire 369 Squadron Auxiliary Air Force fighting against the Regia Aeronautica squadriglia d'aquila - two fictitious squadrons. We use the Wings of Glory WW2 rules, slightly modified to give faster play. We use the Wings of Glory planes where the right model is available, other manufactures are used to fill in the gaps.

Malta was situated on the increasingly important sea supply route for the North African campaign. It would be a major help to the Allied war effort if the supplies from Italy to the Afrika Korps troops in North Africa could be reduced. Rommel was desperate for more supplies, especially fuel for his panzers. Malta was like an unsinkable aircraft carrier that could be used as the base for many Allied strikes against Italian shipping.

The small capacity of the ports involved limited the size of the Italian convoys. Instead of running a relatively few large convoys, which would have been more efficient in terms of convoy defense, the Italians had to send many small ones, wasting fuel and escorts.

The Bristol Beaufort was a British twin-engined torpedo bomber that was developed from experience gained designing and building the earlier Blenheim light bomber.

The first operation in the Mediterranean in which Beauforts took part was an attack on an Italian convoy on 28 January 1942. The three Beauforts of 39 Squadron included in a large strike force succeeded in crippling the 14,000 ton merchant ship Victoria, which was then sunk by Albacores.

An Italian supply convoy had been spotted, yet again, trying to sneak past Malta and 369 squadron was contacted. Flying Officer Cholmondeley Featherstonehaugh and Pilot Officer Emmett Hollingberry were sitting in deck chairs outside the dispersal hut when the telephone call came.

"Those sneaky Italians are still trying to sneak past Malta without letting us torpedo them!" said Featherstonehaugh, sound somewhat enraged, "That's just not cricket you know! And now we have the new Beaufort instead of the silly old Stringbag we'll be able to knock them for six!".

Featherstonehaugh charged over to the Beaufort, grabbing on his way the FAA crew and shouted for a torpedo to be loaded. 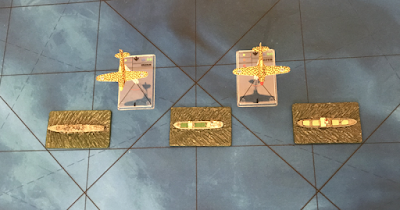 Featherstonehaugh in the Beaufort and Hollingberry in his Hurricane took off and headed for the expected position of the convoy. 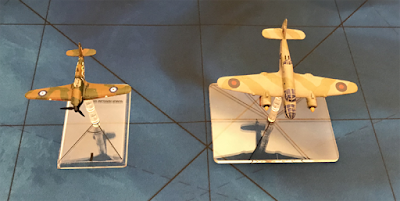 Featherstonehaugh and Hollingberry closed the convoy and the Italians headed out to meet them. 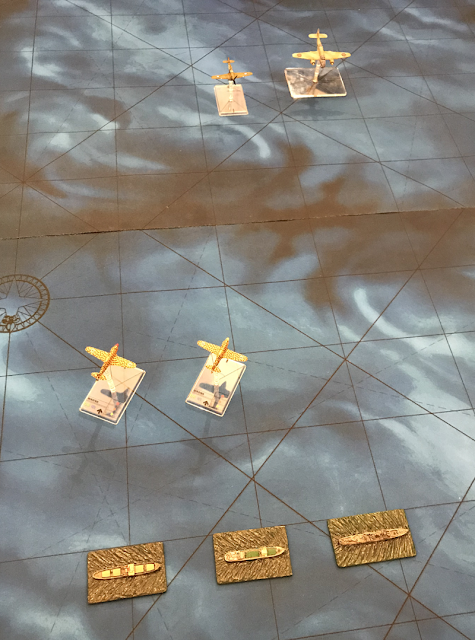 Both sides continued straight forward, no attempt at anything fancy yet. 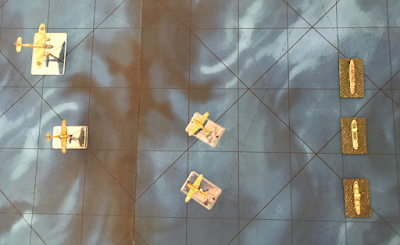 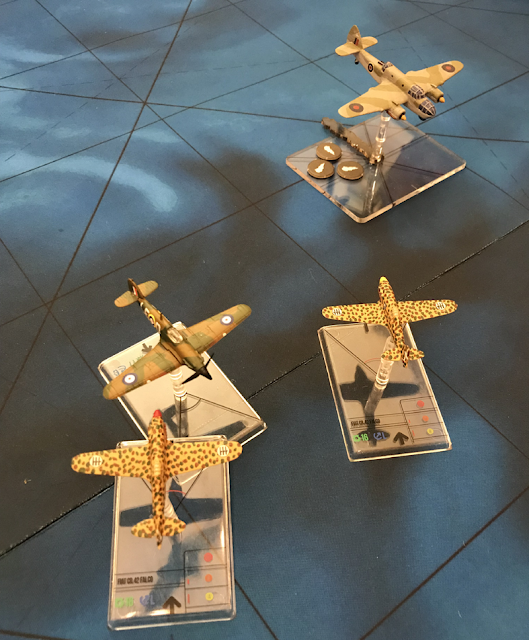 The fight continued and now even Cholmondeley Featherstonehaugh's rear-gunner joined in. 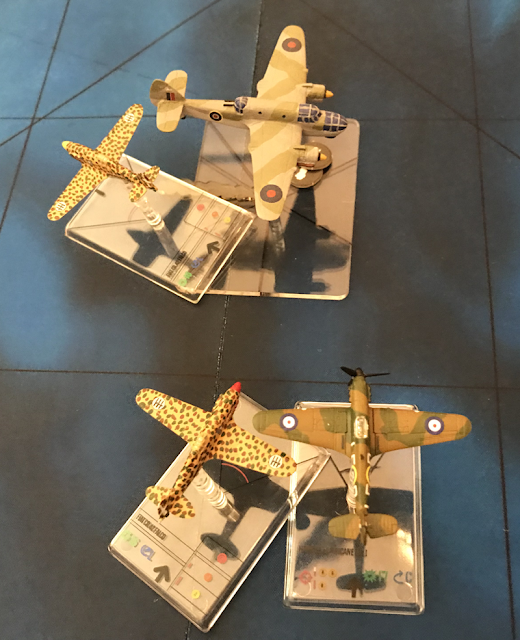 Hollingberry managed to get on the tail of one of the Macchi's as Cholmondeley continued on towards the convoy. 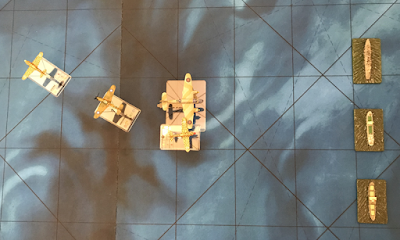 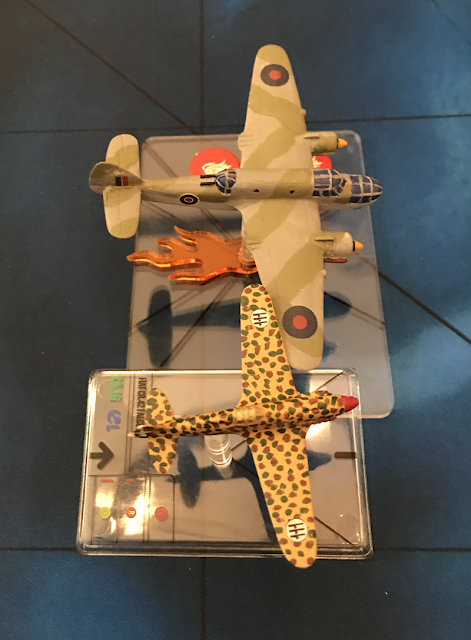 The tailed Macchi did an Immelmann turn and came on head-to-head with Hollingberry's Hurricane. Cholmondeley turned his Beaufort in an attempt to loose the pursuing Macchi. 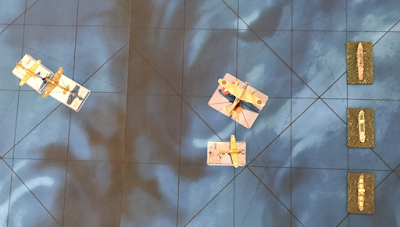 Not to be outdone, even Hollingberry performed and Immelmann turn and was once again on the Macchi's tail. 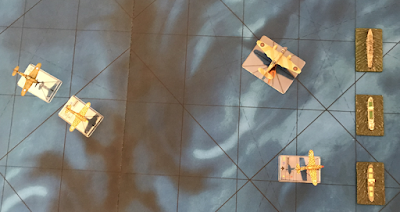 The Italian pilot knew he was in trouble. 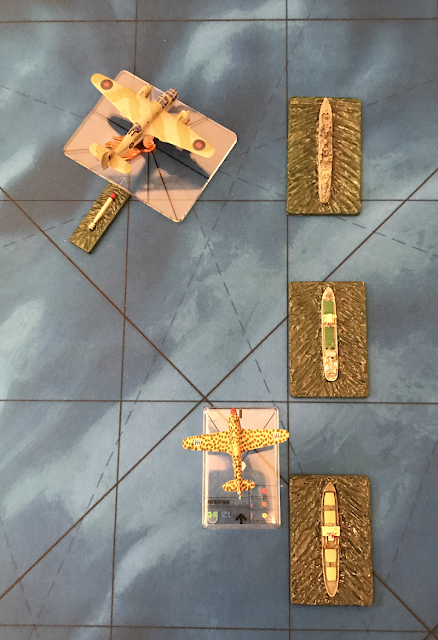 The Italian pilot tried to dive to get away from Hollingberry on his tail, but a cloe range burst from the Hurricane's eight machine-guns caused the Macchi's engine to start smoking.

Cholmondeley managed to put out his engine fire as he turned away from the ships while being chased by a Macchi. 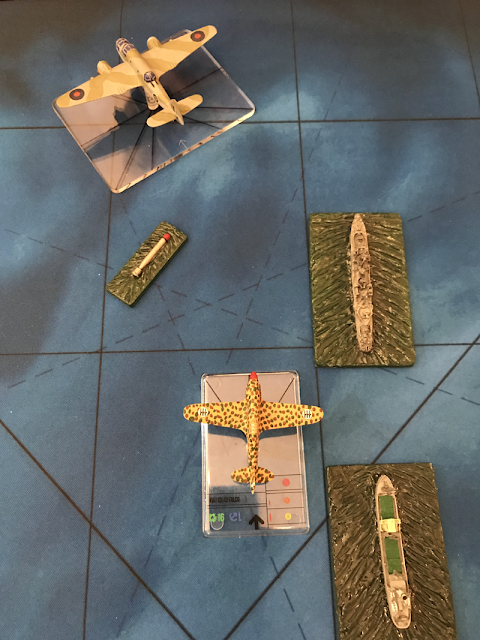 The Macchi could take it no more, another kill to Hollingberry. 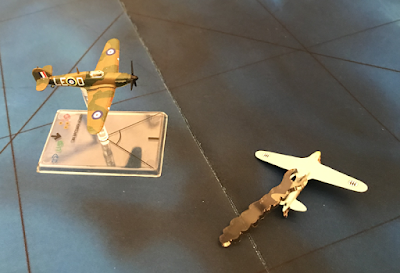 A Macchi chased Cholmondeley's Beaufort as Hollingberry headed to rescue his friend. The torpedo headed straight towards the leading Italian ship, but went straight under it without exploding. 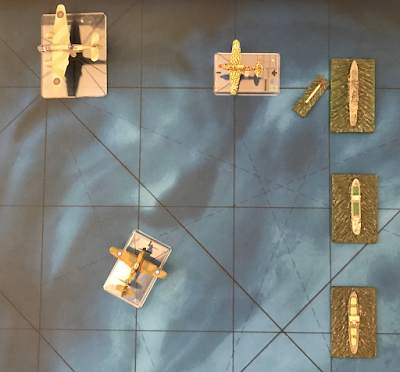 Hollingberry opens fire on the Macchi that is now tailing Cholmondeley. 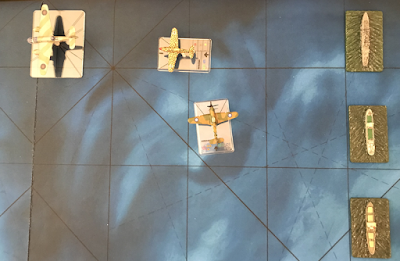 But Cholmondeley's Beaufort could take no more, he had to ditch it in the sea. 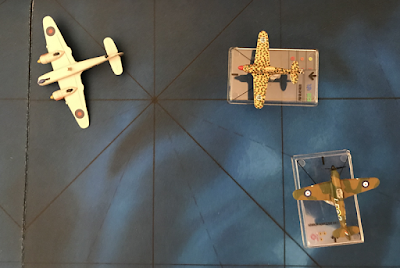 Already seriously damaged by Cholmondeley's rear-gunner, the Macchi was easy prey for Hollingberry. 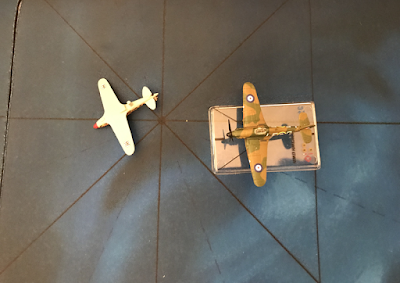 Cholmondeley and his disgruntled crew were picked up but a British submarine that was shadowing the convoy and radioing its position.

Italian Victory - the convoy got through

The Macchi C.202 Folgore fighters and the Bristol Beaufort torpedo bomber are from Armaments in Miniature (AIM), an American company that has a range of unpainted resin models in different scales. Their 9mm (1:200) scale models fit well together with the WW2 models for Wings Of Glory. All the models are very reasonably priced, the fighters cost $5 each and the bombers $7 each.