The party consists of 6 second-level adventurers: a dwarf fighter, a human paladin, a human female ranger, a half-elf magic-user, a human cleric, a hobbit thief and Fido the dog.

Having recovered the expensive silk cloth from the kobolds, the party continued onward towards their destination. However a problem occurred, their food was running out much faster than expected; the hobbit had been feeding all the beef jerky to his new friend the dog. When a farm came in sight, the party decided to uses some of their new found gold to replenish their stocks of food before the dog emptied their stores.

When they reached the farm building, they were met but the farmer, his wife, their older daughter and a farmhand. The daughter was armed with a kitchen knife and the other three with newly sharpened farm implements.

When they discovered that the party was no threat, they explain that while they had been working in the fields, their younger daughter had been kidnapped and stolen away. The kidnappers were seen and followed by their daughter; they disappeared off in the direction of the old ruined keep.
The party offered to return the daughter if the farmer would look after the donkey while they were doing it. The farmer of course agreed and promised a huge feast when they returned with his daughter.

The party rested the night and then left at sunrise. Pointed in the right direction, the Ranger could easily follow the trail.

They keep came in sight just after midday. As the party came nearer they could see the smoke from a camp fire in the ruins of what was once one of the keeps towers.

The hobbit and the ranger crept towards the ruined tower. They could see five kobolds cooking around an open fire. Deciding to break cover, the hobbit and ranger opened fire with long bow and sling. The kobolds returned fire. The kobolds were defeated, but the party was wounded. 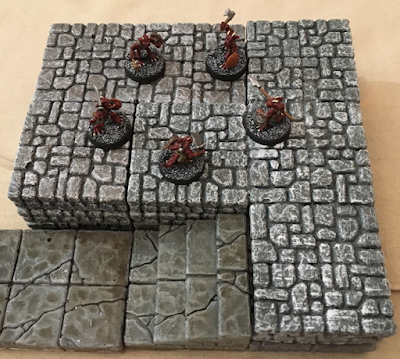 The party occupied the ruined tower. They could see that it contained a stairway going down into an underground passage. They decided to camp the night in the ruins and recover. They posted guards in 3 watches.

In the second watch, a group of kobolds sneaked up from underground. Luckily Fido's nose gave warning, and the paladin when into action and attacked the intruders while Fido howled and woke up the rest of the party. Once awake, the party easily defeated the kobolds. 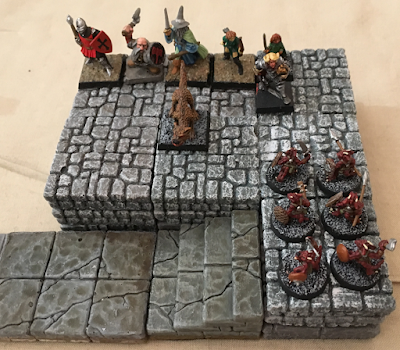 The next morning, the now recovered party went down the stairway into the dungeon. 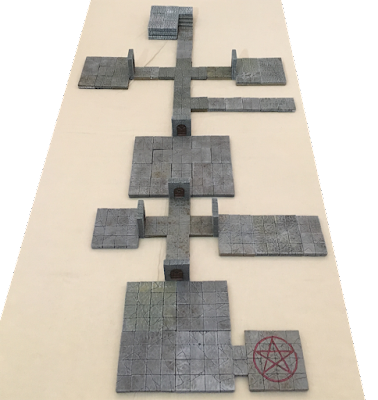 The corridor was poorly lit by torches spaced along the walls. The hobbit and ranger were in the lead, followed by the dwarf and paladin, then the cleric and Fido, and finally the magic-user was hindmost.

The party came to a crossroads with doors visible down the passageways both right and left. They turned down the left passage. The hobbit listened at the door and then picked the lock. 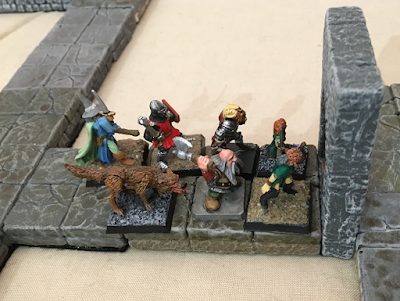 The hobbit opened the door and looked in. Inside the room were 5 kobolds who had barricaded themselves behind storage crates and barrels. They had already been warned that the party had camped and was going to come down.

The hobbit slammed the door and the party retired. 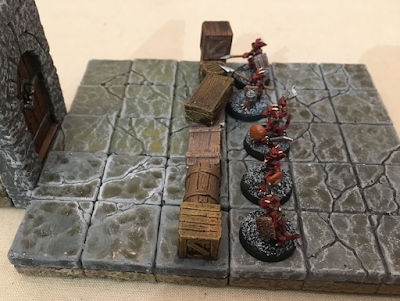 Ignoring the door to the right, the party continued on into the dungeon. At the next door they repeated the procedure. The hobbit listened, but didn't hear anything. However he did detect a faint smell of manure. The door lock couldn't be picked, so the dwarf kicked it in. 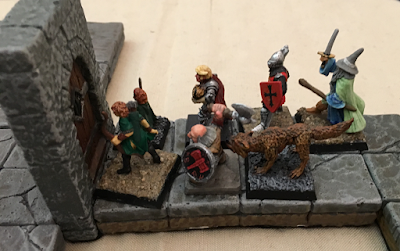 The door flew open and the party rushed into the room, spreading out as they went. The middle of the room was a mushroom farm; full of mushrooms growing in deep manure. Two kobolds were among the mushrooms.

The party rushed forward to attack the kobolds; some of the party slipped on the manure and fell prone. But in the long run, two kobolds were no match for the party. 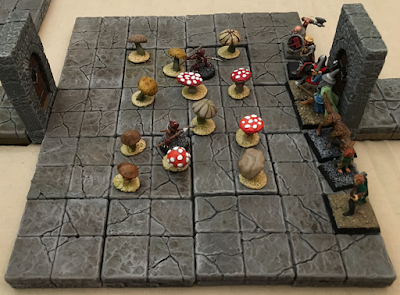 While the fight was going on in the mushroom farm, the kobolds from the two bypassed rooms came out and started following the party. 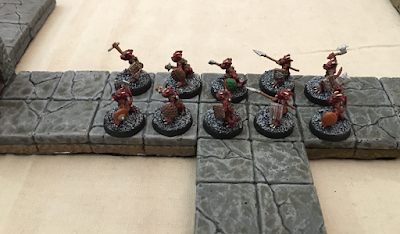 They caught up with the party in the mushroom farm, and shots were exchanged. 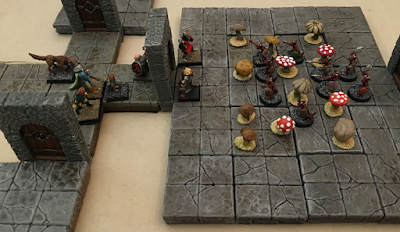 The party retired into the narrow passage behind the door and waited to be attacked. 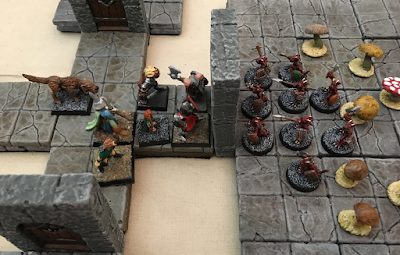 While the fight was going on, one more kobold came out from the armoury behind the party. This kobold was easily dealt with by Fido the dog. 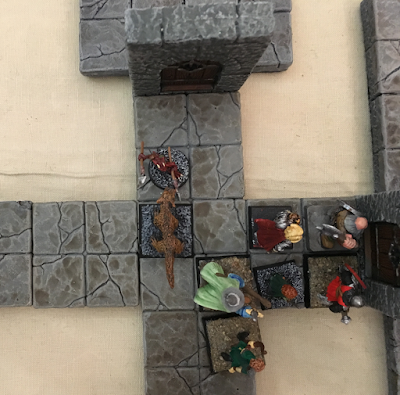 Having defeated the kobolds behind them, the party then checked first the room to their right which was the armoury (containing many assorted kobold weapons, targets etc.) and then they peered into the room to the right which was a dark unlit crypt. Perhaps wisely, the party decided not to enter the room so they never found out what coffins, sarcophagi, or religious relics it contained. 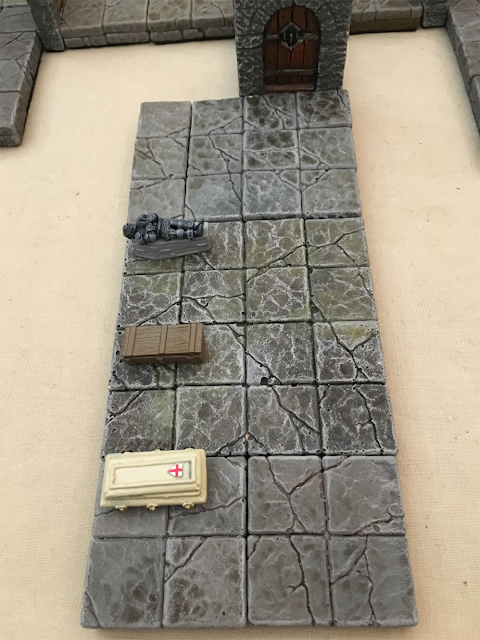 The party came to the final room. It contained 3 kobolds and a kobold shaman. Of to the left was an alcove, the entrance to which was covered by a drapery by which stood two beefy kobold guards. 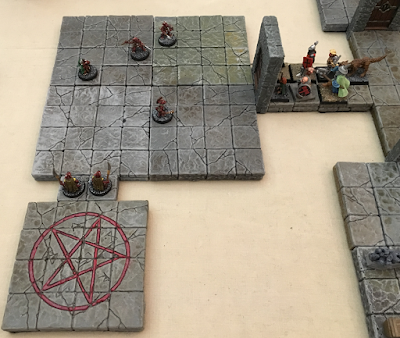 The party rushed in and attacked. The kobolds responded and the kobold shaman fired off some magic missiles. 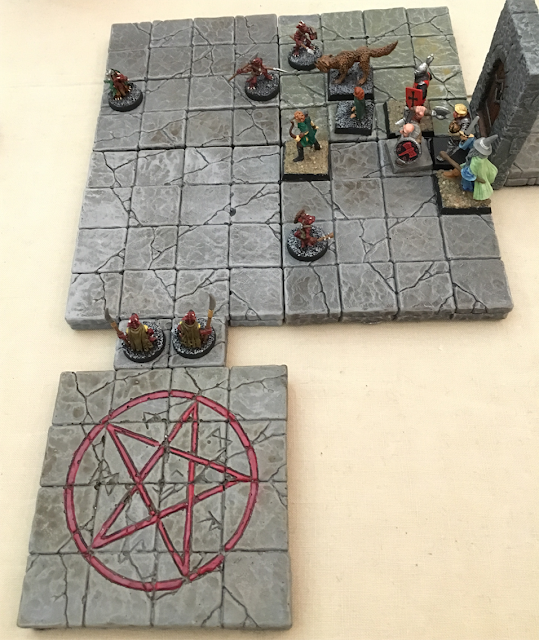 The kobold guards entered the fray, and an ogre (the leader of the kobolds) came out from the alcove.

The cleric healed the magic-user who had taken the brunt of the shaman's attack and the dwarf who was looking the worse for wear after defending the door to the mushroom farm.

Fido the dog took out the shaman, the dwarf took out the ogre with some supporting fire from the magic-user, and the rest of the party mopped up the remaining kobolds. 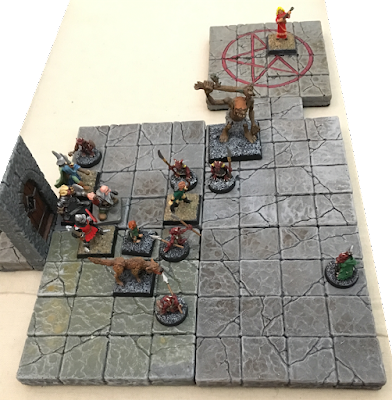 The kobold guards entered the fray. An ogre wielding a large club came out from the alcove; he was the leader of the kobolds. Fido the dog took out the shaman, the dwarf took out the ogre with some supporting fire from the magic-user, and the rest of the party mopped up the remaining kobolds. 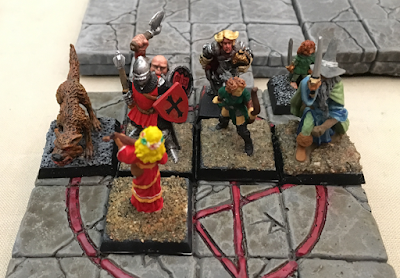 The party then entered the alcove where they found the farmer's daughter. She had been playing her lute and entertaining her ogre captor.

The room contained the ogre's bed by the left wall, a locked chest by the right and a large chair (perhaps a throne) straight ahead.

On the wall behind the chair there hung a shield and 4 arrows. The shield was round, had a battle-axe motif, its edges bound with metal etched with dwarven runes. The arrows were of extreme fine quality, the fletching bright white eagle feathers and the metal tips glowed brilliantly even in the poor smokey torchlight.


The magic-user noticed the remains of an old spell book that the ogre had been using as toilet paper. He quickly put the book into his backpack. The book contains the spells: Hold Portal, Light, Magic Missile, Read Magic, Levitate, Mirror Image, Strength and Web.

The dwarf grabbed the shield which was obviously of dwarven origin, the ranger grabbed the four arrows which were a perfect fit for his long bow. The magic-user and the cleric picked up the chest between them. The paladin escorted the farmer's daughter. Fido followed behind, rather disgruntled that he hadn't found a new bone this adventure.

On returning the party examined their spoils. the shield and arrows were all magic. The chest contained a mixture of copper, silver and gold coins to a value of 200 gp.