Battle of Albuera in 6mm

Refight of the Battle of Albuera, 16 May 1811, using Commands & Colors Napoleonic Rules. Figures from Baccus, hex terrain from Kallistra, houses from TBM, trees from Timecast and river homemade.

The Fortress of Badajoz dominated the southern invasion route from Portugal into Spain. The British had invested the fortress, but had few engineers and no siege train to speak of. The French were not idle. Marshal Soult set out toward Badajoz with a relieving force. Beresford, the temporary army commander, marched a force larger than Soult’s to the small town of Albuera to meet the French. Beresford placed his army on the ridge behind Albuera, expecting to receive a frontal assault to split his army. Soult, however, formed most of his army behind the high ground opposite the Spanish on the right flank.

On the morning of May 16th, General Godinot’s brigade attacked Albuera as a diversion, while Soult’s main force moved unobserved across the Albuera River and delivered a flank attack upon Blake’s Spanish contingent. The first Spanish unit attacked was Zayas’s division, a veteran unit under a good commander. Though pounded by superior French forces, the Spaniards held until Stewart’s British division arrived. Stewart threw Colborne’s British brigade at the French flank and checked French progress, but none of Colborne’ regiments were in square. French cavalry charged and virtually destroyed three of the four regiments. The rest of Stewart’s division went into line behind the embattled Spaniards. The French made a fatal pause to allow a fresh division to come forward. Zayas’s survivors drew off under no pressure. Now a solid line of British muskets awaited the French columns that had been successful against Zayas. As the fresh French and British formations met, both did fearful execution to each other at close range, British line fire prevailed, causing the battered columns to retreat. French reserves (Werle’s division) advanced toward Stewart’s remnants, but help was coming. Sensing disaster, General Cole advanced his British division without orders. His action won the battle, as British line fire triumphed over the French columns, but again at a high cost in British casualties. Soult could see Harvey’s fresh Portuguese division advancing, and with no more fresh troops available, ordered a French retreat.

Although considered a British victory, when Wellington heard he had lost almost 6,000 irreplaceable British soldiers, he was reported to have said, “Another such battle will ruin us." 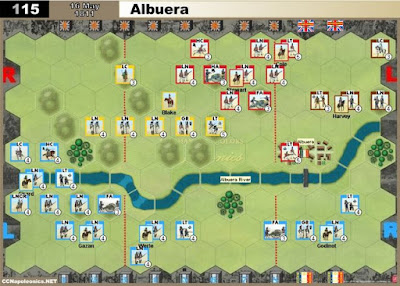 The French started their attack by crossing the river behind the cover of woods and a ridge in order to take Blake's Spanish troops in the flank. 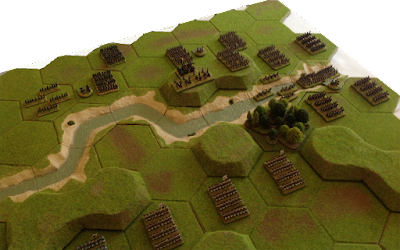 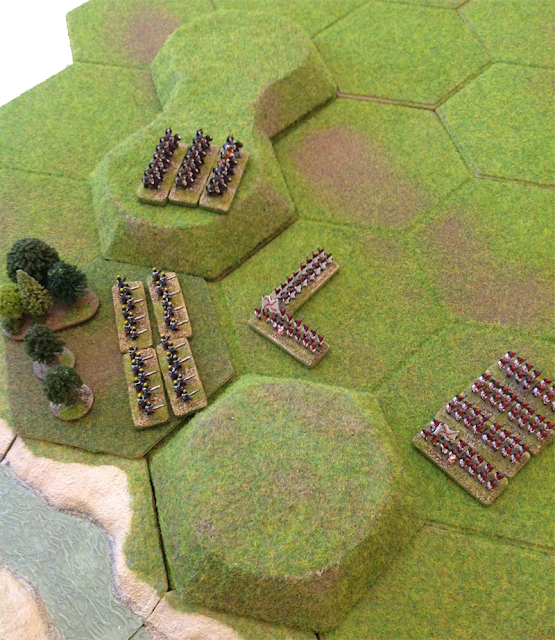 The Spanish infantry defending their right flank didn't last for long under the pressure from French combined arms. However the did give Blake enough time to pull back the other infantry onto the ridge behind and he was reinforced by some Royal Horse Artillery. 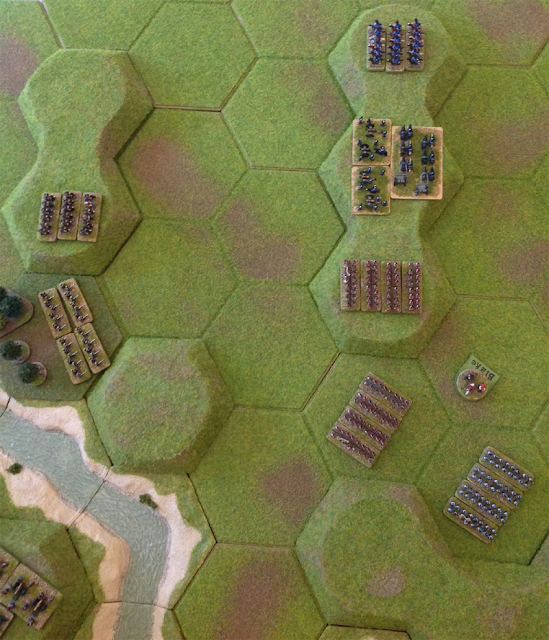 Général Girad brought up the Polish lancers and French light cavalry to support the Dragoons. Blake sent the Granaderos de Fernando VII (a light cavalry unit despite their name) to attack the French Chasseurs à Cheval. Losses were equal in the fight that ensued. 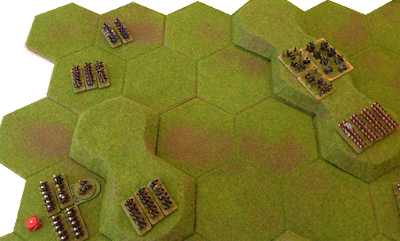 The charge of the Spanish cavalry had left the horse artillery unprotected. Général Girad led the Polish lancers in a charge at the guns. The guns were surprised and the lancers rode over them with minimal losses. Only a few guns managed to limber up and retreat to their rear; the rest were lost. 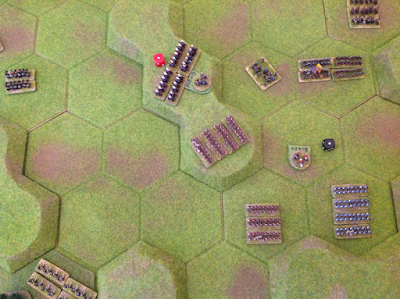 The lancers continued their charge, heading at the flank of the Spanish infantry, but these formed square after receiving heavy losses. 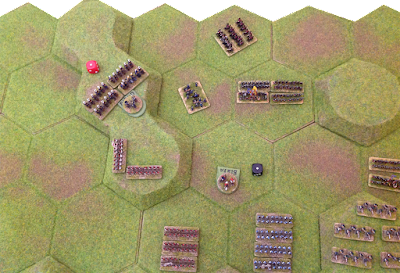 The British tried to bring up their infantry from their other flank to stop the French. While this was happening the Polish Lancers charged the British Heavy Dragoons which immediately counter-charged. The Dragoons lost more heavily than the lancers. 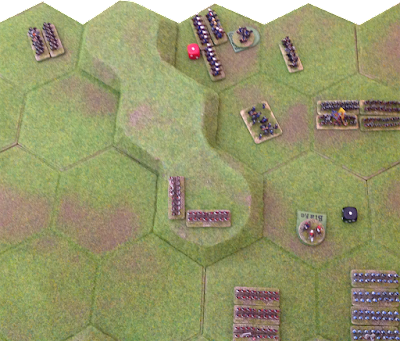 The British infantry arrived, and with support from the few remaining horse artillery guns, were able to push back Girard and the Polish lancers. 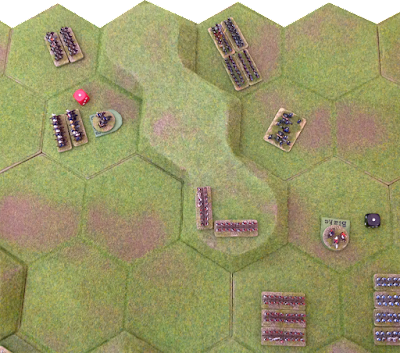 In safety, behind the ridge, Girard rallied the lancers, ready to fight again.

Général Girad then ordered a full out cavalry charge by all his cavalry. 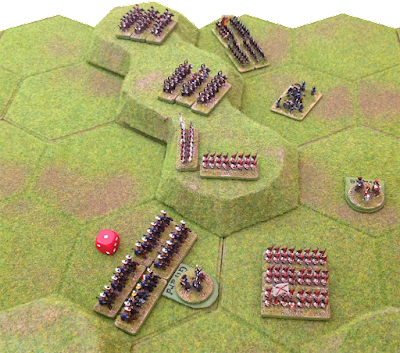 Unluckily for the Allies, General Stewart took over command just at that moment from his hilltop position. He ordered the infantry to advance and receive the cavalry charge in line instead of forming square. 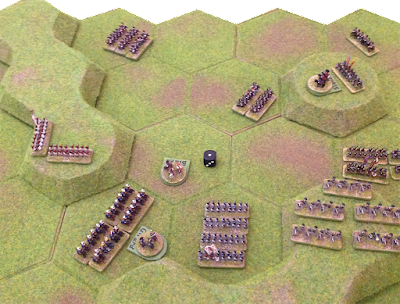 General Stewart counter-attacked with his infantry, and the French pulled back their cavalry. 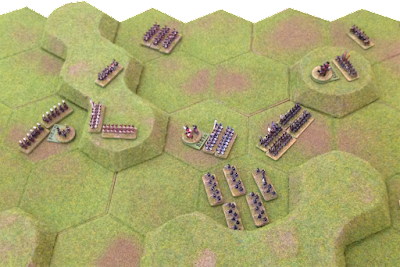 The French now decided that they needed infantry support; a bayonet charge by the supporting infantry was called for. 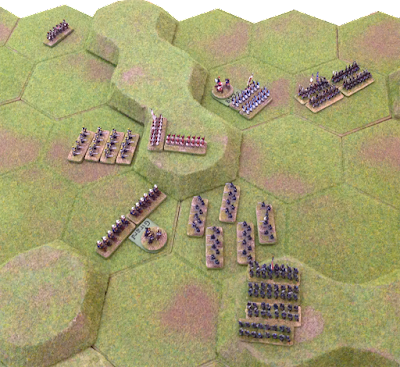 The Spanish light infantry and square were wiped out by the bayonet charge. 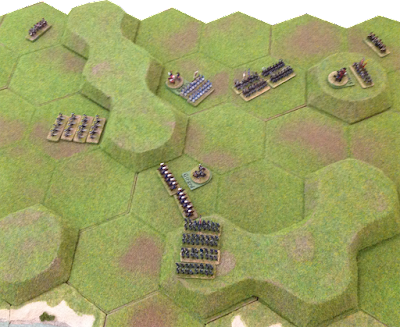 Without Wellington in command, the Allies were confused and demoralized. They retreated from the battlefield. It was not "A Close Run Thing" at all!