The Roman Invasion of Britain - Scenario 10

This is the tenth and final scenario in our campaign representing the Roman Invasion of Britain based on my own campaign rules.

After years of campaigns in northern Britain, Gnaeus Julius Agricola subdued all the tribes except the fierce Caledonians. Agricola maneuvered to bring the Caledonians to open battle. Determined to restore the security of his Highland home, the Caledonian chief, Calgacus, gathered a strong force of about 30,000 and awaited and the Romans at Mons Graupius. Calgacus occupied the high ground with his main force and posted a line of chariots on level ground to their front. The Roman army was of roughly equal size. Agricola deployed his auxiliary infantry and cavalry in the main battle line and held his legions in reserve. The battle opened with Agricola’s cavalry charge against the barbarian chariots while the infantry moved forward and engaged in an exchange of missiles with the enemy. When the charioteers began to give ground, the Roman auxiliary infantry closed to hand-to-hand combat, which drove the enemy line back. A desperate attempt to outflank the Roman line was turned back by another cavalry charge.

This is scenario 410 from Commands & Colors Ancients - Expansion 4. The Romans have 2 glory points from the previous scenario and the Britons have 1 glory point. Glory points in our campaign rules are an addition to the standard C&CA rules.

The Romans had initially planned to keep their legionaries in reserve and let their lighter troops do the work. However the Roman commander immediately changed the plan, and brought forward his legionaries, positioned in the centre behind the light troops.

Coordinating his troop movements, the Caledonian commander ordered his light infantry to occupy the woods on his right flank and joined the Cavalry to advancing on his left centre.

The Roman general ordered his light troops into action, the bowmen to remain stationary and shoot while the auxilia and light cavalry advanced and threw javelins.

On the left flank, the Caledonian leader inspired his cavalry and chariots to charge the Roman light cavalry. 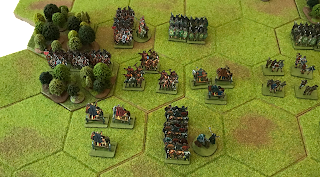 With very few losses to themselves, the Caledonians eliminated first the light cavalry and then destroyed the medium cavalry supporting them (although allowing their commander to escape) and finally caused the auxila to retreat. 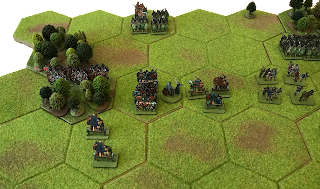 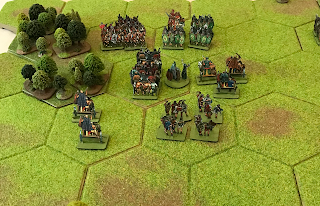 Although the Romans took heavy losses, the attack we a success. The Caledonian cavalry unit and one of the chariot units were wiped out and their leader killed. Even the remaining chariot unit took casualties. 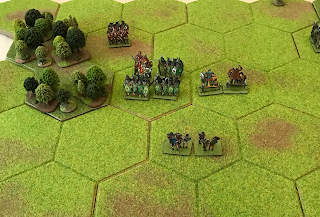 The Caledonians advanced two units in their centre, preparing for a new attack. 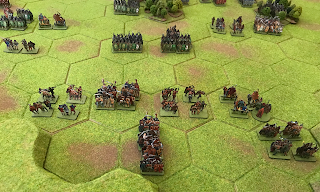 The Roman general ordered his flanks into action. On his right flank, the auxilia and light infantry cut of the retreat for the chariots and attacked. On the left flank, a warband of allied southern British warriors charged into the Caledonian infantry.

The chariots were wiped out. Half the Caledonian infantry were killed, but the southern British warriors took losses too. 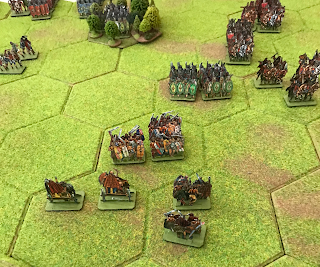 In the centre, the desperate Caledonians charged into the Roman line, the warriors were eliminated without causing any enemy losses and the light infantry fled without doing any damage. 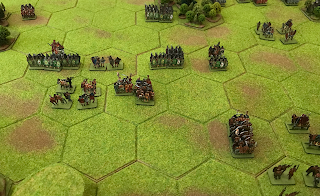 With a Clash Of Shields, the warband of allied southern British warriors charged into the Caledonian infantry, wiped them out and then turned on the chariots who desperately tried to evade but without success and even they were destroyed. 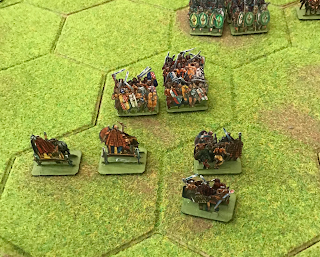 The victory was complete, the Caledonians were demoralized, all thanks to the brave and valiant charge of the British warriors.

The outcome was considered remarkable because solely auxiliary forces had achieved the victory. Following the battle, Agricola proclaimed that all tribes in Britain had been conquered.

Queen Boudica, speaking at a feast later in her life, described this campaign as a "the nearest-run thing you ever saw in your life", a quote that was stolen, many years later, by a general with funny boots.