The Roman Invasion of Britain - Scenario 8

This is the eighth scenario in our campaign representing the Roman Invasion of Britain based on my own campaign rules.

Queen Boudica led her army of rebels, predominantly Iceni and Trinovantes, to Camulodunum (Colchester), slaughtering anyone who stood in their way. The city was once the capital of the Trinovantes, but was now the Roman capital and designated a colonia for unruly veterans of Legio XX Valeria Victrix.

As Boudica approached the city, the statue of Victory fell prostrate without any evident cause and turned its back to the enemy, as though it fled before them. This fanned the flames of panic. The Romans were so confident that the Britons had been pacified that they built no walls around the city, instead favouring amenities like bath houses.

The small Roman garrison was bolstered by armed veterans and a few men sent by the procurator Decianus. Hopelessly outnumbered, they took refuge in the Claudian temple and hoped to hold out until a relief force could arrive. 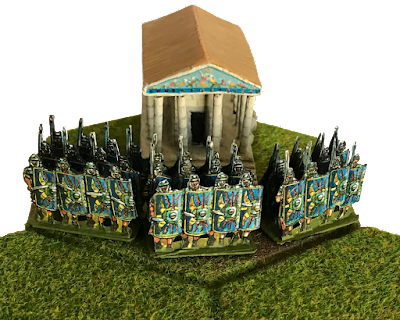 The impetuous Appius Titus Aper with elements of Legio IX Hispana, rushed to the aid of the city, and was ambushed while in march column.

This is not an official scenario, it is scenario 17 from C3i Magazine. The Romans have 2 glory points (one from the previous scenario) and the Britons have 0 glory points. Glory points in our campaign rules are an addition to the standard C&CA rules.

While the rest of the army faced off against the approaching Roman legion, two units of warriors on the British right flank attacked the small garrison in the Claudian temple. Boudica immediately used the mobility of her chariot to inspire her warriors. 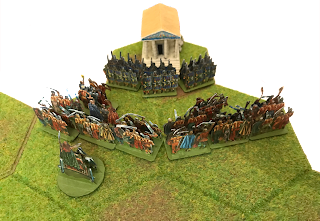 Encouraged by Boudica herself, and with surprisingly few losses, the warriors stormed the temple of Claudius. 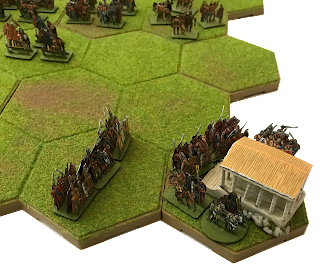 In their centre, the Romans moved two units of legionaries so as to form a battle line whilst advancing a unit of auxilia to throw javelins at the Britons (although with no noticeable effect). 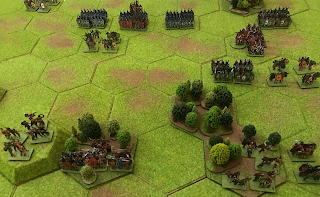 The cry of "I am Boudica" was heard from the British lines.

A unit of warriors charged forward, into the woods, and attacked the Roman auxilia beyond. A second unit of British foot followed in support. While Boudica herself returned to her original place at the head of her chariots. 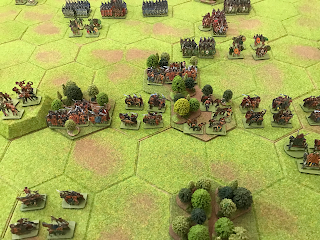 The auxilia took no serious lost while killing half of the charging warriors, halting them in the woods. 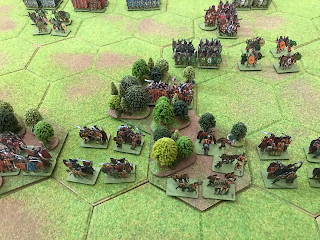 The Roman general ordered forward two units of legionaries to support his auxilia.

The remaining British warriors in the woods threw themselves at the auxilia, causing no casualties, but then they themselves were wiped out. At the same time two units of Britons threw their javelins at the Roman light infantry which eliminated them as a fighting force. 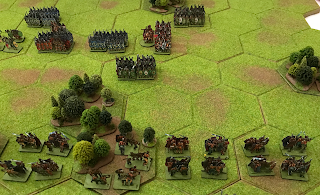 The Roman general ordered the troops in the centre to follow his leadership and advance. 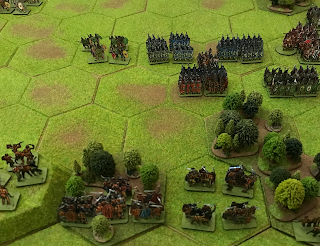 The Britons used the mobility of their light troops to combine movement and firing. They move three units of chariots to their extreme left flank. On the right flank, the light infantry opened up without success.

Seeing the advancing British chariots, but perhaps a little desperately, the Romans ordered a mounted charge by their medium cavalry on both flanks.

On the Roman left, Appius Titus Aper led the cavalry headlong into the line of British foot. 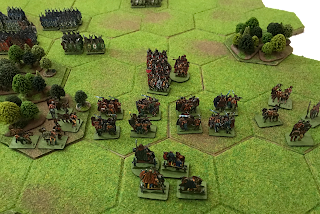 Although they took heavy losses, the British foot held the line, and even manage to cause casualties to the Roman cavalry thanks to the inspiration of Boudica in her chariot behind them. This left the Roman cavalry alone and exposed. 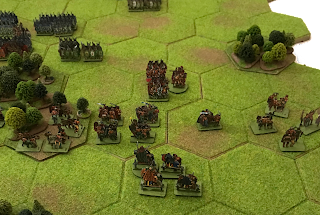 Meanwhile on the Roman right, their cavalry charged into the slowly advancing British chariots. The chariots had been crowded and not been left any space to evade, so they had to stand their ground and fight. 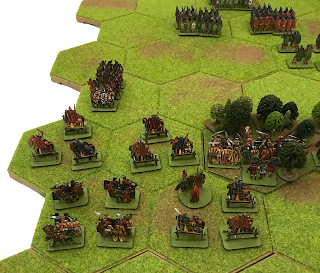 But the Roman charge, although ferocious, was unable to completely eliminate the unit of British chariots. Encouraged by the presence of their leader, the chariots caused serious losses to their attackers. 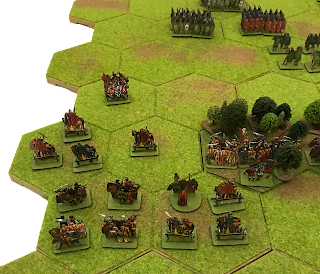 The British ordered their mounted chariots. On their right, Boudica retired, not wanting to be charged by Appius Titus Aper's cavalry, On their left, the chariots used their mobility to envelope the lone Roman cavalry and destroy it. 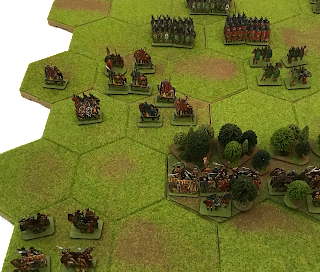 The Romans immediately retaliated, ordering three units on their right flank (two of auxilia and one of legionaries) to attack the bold chariots. The chariots evaded the slow moving infantrymen without loss. 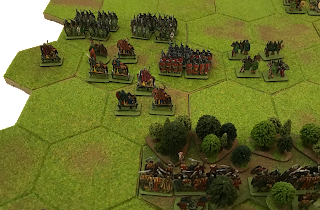 The full strength chariot units, nimbly turned around and performed a mounted charge at the Roman infantry, while their depleted unit retired to safety. 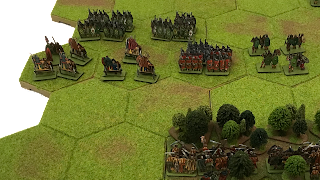 The first attack caused some casualties to the auxilia, but the chariots then panicked and fled to the very rear of the battlefield. However the second attack wiped out the remainder of the first auxilia unit and the crashed into the second destroying that one as well. 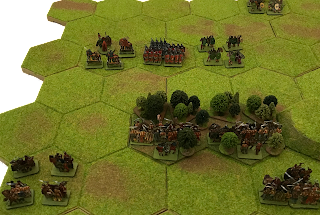 The Roman commander ordered both his heavy infantry units to attack.

In the centre the elite legionaries advanced between the woods and attacked the Britons. 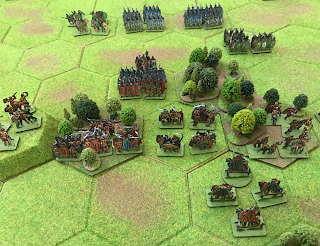 The Britons took casualties and retreated, with no losses to the Romans who followed up close on the heels of the enemy. 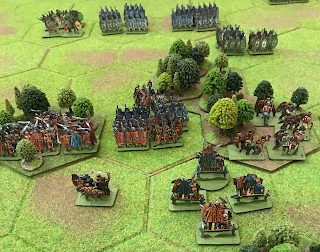 The Romans continued their attack, finally eliminating the British unit after which their attack halted. 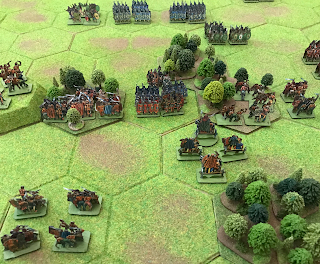 The other unit of elite legionaries on their right flank tried to attack the British chariots, which evaded back to safety. 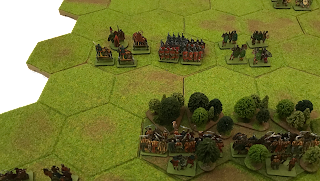 Seeing that the Roman cavalry was exposed, Boudica ordered her light troops to surround and destroy them. She led the attack herself with her chariots. 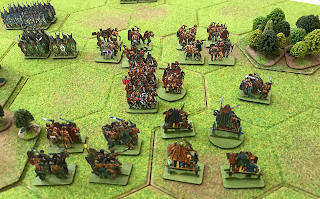 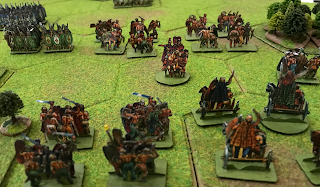 Appius Titus Aper fled from the victorious Britons. He furtively crept through the woods, disguised in a British helmet and cloak to avoid being detected and captured by the pursuing warriors. He eventually made it back to the Roman camp, where his welcome by the defeated legionaries was ungracious. 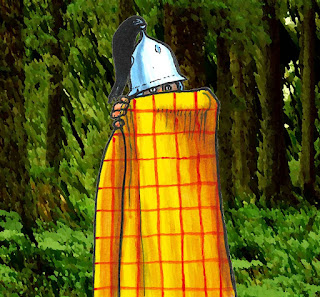