The Roman Invasion of Britain - Scenario 4

This is the fourth scenario in our campaign representing the Roman Invasion of Britain based on my own campaign rules.

In 43 AD, almost one hundred years after Julius Caesar visited Britain, the Emperor Claudius created an army under the command of the distinguished senator Aulus Plautius, to once again invade Britain. This time for conquest, the Romans were planning on staying. The pretext for the invasion was to reinstate Verica, the exiled king of the Atrebates.

The strike force consisted of 40,000 men, half of which were 4 legions of heavy infantry and the other half was a mix of auxiliary units (cavalry, mounted infantry and light infantry). The main invasion force departed from Boulogne in three divisions and landed at Richborough, on Kent’s east coast.

The British were ready to meet the invasion force on the beaches, but when they saw its size, they retired inland. The Romans advanced with only minor skirmishes until their scouts finally found the enemy camped on the northern bank of the River Medway, near Rochester. Togodumnus and Caratacus, the commanders of the Britons, believed the river would halt the Roman advance.

The Britons were surprised when on the Roman right flank, auxiliary light infantry units, led by the Batavians, swam the river and attacked. 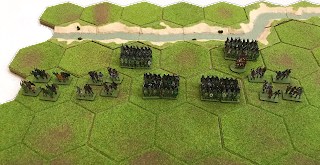 Appius Titus Aper, grandson to the famous Gnaeus Hostilius Aper was pulled across the river on a raft made from inflated sheeps' stomachs towed by six swimming Batavians. He ordered his auxiliary light infantry units to deploy and advance.

While the Britons were preoccupied with the auxiliaries, the Legio II Augusta under Vespasian, constructed a pontoon bridge on the Roman left flank and as night began to fall crossed the river. They were to be followed by the remaining legions.

The next day the Britons attacked, aiming their strength at the bridgehead and planning to push the legions back into the river. Gnaeus Hosidius Geta led his legion across the river in daring counter attack. 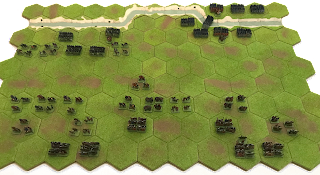 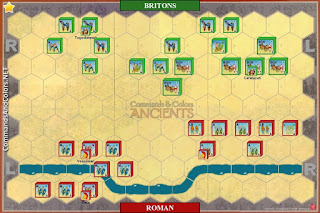 Note: This is scenario 407 from Commands & Colors Ancients - Expansion 4. The Romans have 2 glory points from the previous scenario and the Britons have 1 glory point. Glory points in our campaign rules are an addition to the standard C&CA rules.

The Romans gained the advantage and started to move.

The Roman legate Vespasian ordered his main body on the Roman left flank to advance in line, trying to get his legions over the river and into action.

Seeing the Romans advancing, Caratacus on the British left flank ordered a mounted charge. Four of his chariot units flew at the Romans with himself in command. 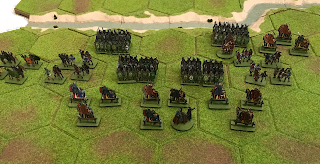 The chariots slaughtered two units of Roman Auxilia and one of light infantry, but lost one of their own chariot units and a second with severe casualties. 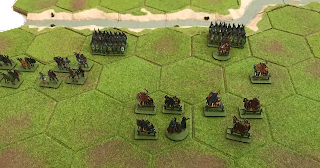 The fight on the Roman right flank was getting desperate, so Appius Titus Aper ordered two of his units to attack the pesky British chariots. 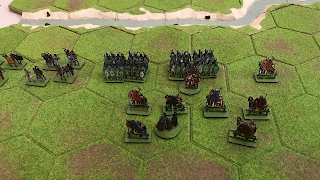 The understrength British chariot unit was destroyed, but the second chariot unit, under the command of Caratacus, evaded the Roman attack. 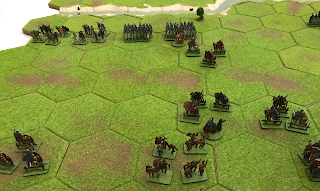 Not to be discouraged by the Roman success, Caratacus ordered three of his units on the left flank; these chariot units attacked the Roman flank. 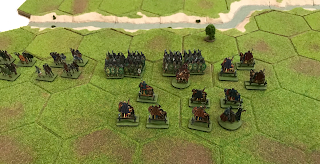 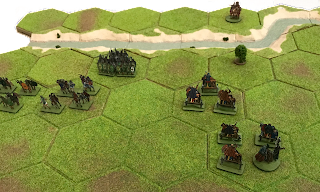 On the Roman left, legate Vespasian ordered his line to advance towards the British. 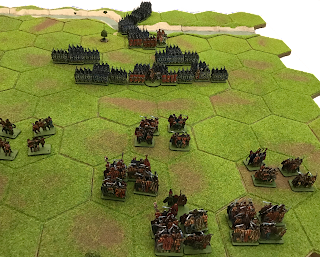 The British commanders ordered their light troops. On the British right flank, a javelin armed inexperienced warband moved out to the flank in order to expose the experienced warriors behind. 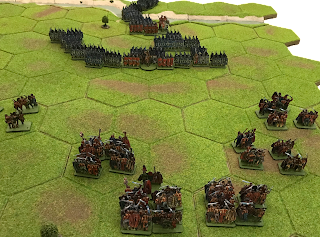 While back on the British left flank, Caratacus once again led 3 chariot units to attack the last remaining Roman Auxilia unit. 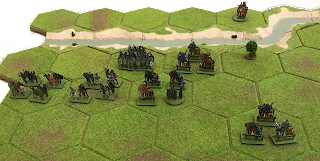 The chariots overran the Auxila and the continued into the light infantry which evaded into the river with slight casualties. 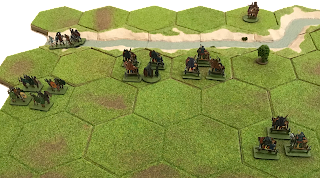 Appius Titus Aper ordered his two remaining light infantry units to attack Caratacus and his chariots from behind. 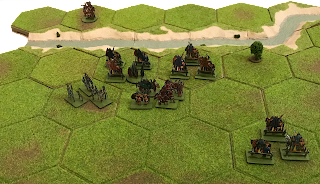 The desperate attack was not successful. One unit of light infantry retreated back into the river. The second stood firm but lost half its strength. The Roman commander used his two Glory Points to rally it back to full strength ready to meet the British counterattack. Glory points in our campaign rules are an addition to the standard C&CA rules. 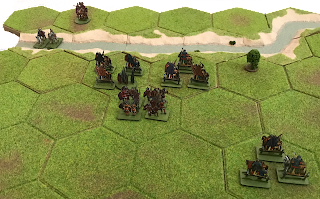 Caratacus could see that the Romans were on the brink of breaking. So he ordered his light troops to attack. Four chariot units surrounded the Roman light infantry. This was the moment of truth, so even the understrength chariot unit had to charge.

The British commander used his only Glory Point to encourage a chariot unit to become heroic. While heroic, the unit will score a hit for each leader symbol rolled in close combat and may ignore one flag. Glory points in our campaign rules are an addition to the standard C&CA rules.

The chariots fought heroically and slaughtered the light infantry which didn't have a chance to evade. 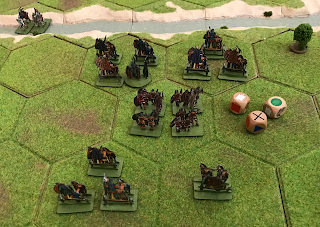 The Romans, seeing that their right flank had been destroyed, paused their advance giving the victorious British even more time to retire safely and regroup for the next battle. 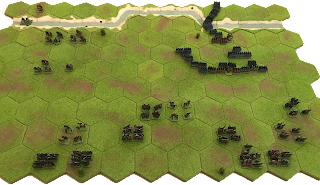