The Roman Invasion of Britain - Scenario 2

This is the second scenario in our campaign representing the Roman Invasion of Britain based on my own campaign rules.

During the winter of 55–54 BC, Julius Caesar planned his second invasion of Britain for the coming summer. Determined not to make the same mistakes as the previous year, Caesar gathered a larger force than on his previous expedition with five legions as opposed to two, plus two thousand cavalry.

The troops embarked at Portus Itius (Boulogne) in 800 ships and crossed the channel, landing at beach that Caesar had identified the previous year (near Sandwich). Intimidated by the size of the fleet, the Britons under the command of Tinpotarus did not oppose the landing but retired inland to give them time to gather their forces.

As Caesar marched inland and encountered a delaying force of Briton charioteers and cavalry at a river crossing on the River Stour. As in the previous year, Julius Caesar commanded the centre and legate Gnaeus Hostilius Aper commanded the right wing.

The British chieftain Tinpotarus had sent messages to the tribes in central Britain, but he needed to gain time for the warbands to gather. When Tinpotarus saw the Romans advancing towards the river, he drew up his chariots and cavalry in a long line, planning to stop or at least delay Caesar's crossing.

Tinpotarus looked at the advancing Roman troops and was worried. He thought that the Roman centre with Caesar in command looked far too dangerous a prospect. Tinpotarus decided that waiting for the Romans to advance would be just playing into their hands, so he would have to attack their flanks. He ordered his light troops; the five units of light chariots in the British centre split right and left and attacked the skirmishing Roman light infantry. 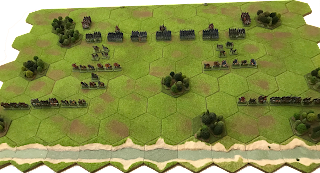 On the left flank, with Tinpotarus himself commanding, the attack was not the success that he had hoped for. The Roman light infantry, encouraged by the presence of Gnaeus Hostilius Aper, fought off the British chariots causing them light casualties. 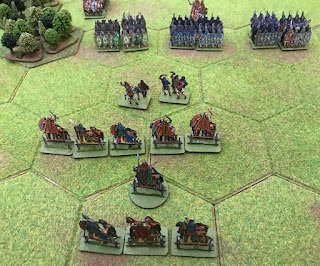 The attack on the right flank fared even worse. Again the Roman light infantry fought off the chariots and caused half of them to retreat back to the banks of the River Stour itself. 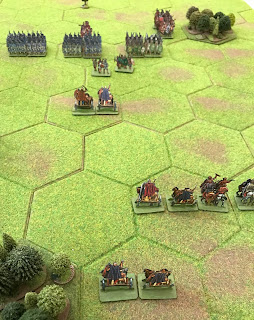 Gnaeus Hostilius Aper took personal command of his unit and the three adjacent ones. He ordered his light infantry into the woods, out of the way, and the charged the pesky British chariots with a unit of legionaries, a unit of Auxilia and a unit of cavalry. 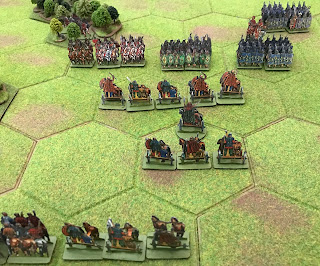 The British chariots were fast and mobile and evaded the charging Romans although the right had unit took more casualties and was now so under-strength as to be almost useless. 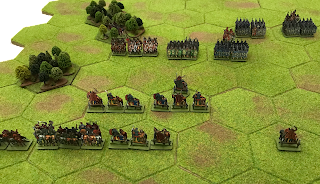 Tinpotarus was now unsure how to handle the situation, he couldn't think of any attractive options. So out of desperation he ordered his medium troops (one cavalry unit on each flank) to attack.

On the British left flank, the cavalry were encouraged by Tinpotarus himself as they charged their Roman equivalents. Thanks to presence of Tinpotarus, the British cavalry wiped out the Roman cavalry. 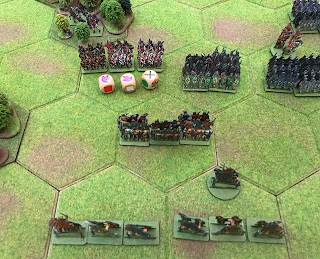 On the British right flank, the cavalry attacked the Roman light infantry. Even though they got no support from the nearby chariots, the British cavalry destroyed the light infantry with no loss to themselves. 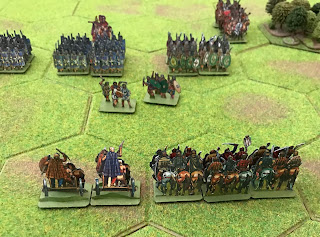 Seeing that the British cavalry were in a precarious position, Gnaeus Hostilius Aper led his infantry in the attack. 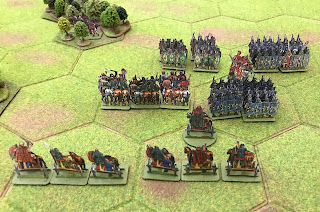 The Roman Auxilia led the assault on the British cavalry taking heavy losses, but then Gnaeus Hostilius Aper followed up with his legionaries completely destroying the cavalry. He then turned his attack on Timpotarus and the chariots but they evaded taking only light casualties. 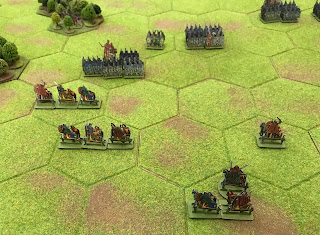 Tinpotarus rallied his chariots and led a lone charge into the understrength unit of Auxilia. 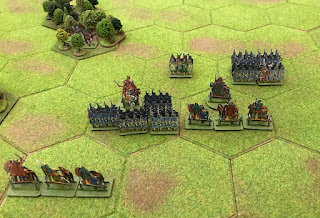 The Auxilia were destroyed so Tinpotarus turned on the unit of legionaries who were supporting them and attacked again. The legionaries lost half their strength and were forced to retreat. 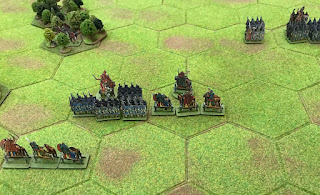 Julius Caesar ordered a coordinated attack. Two units advanced against the British right flank. On the Roman right flank, one unit of legionaries was rallied using a Glory Point. 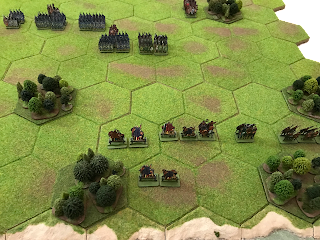 The British rallied one of their chariot units on their right flank using their second Glory Point. The British commander then ordered 3 units on his right flank to attack: two units of chariots and one of light cavalry. 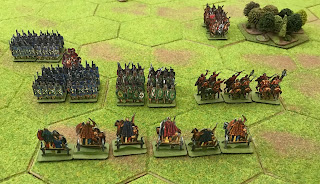 The left hand chariots attacked the Auxila causing slight losses on both sides. Then the second chariot unit attacked the Auxila again causing them to retreat, they then continued their advance and attacked the legionaries who lost half their strength while causing fewer casualties on the chariots. The British light cavalry attacked the Roman medium cavalry with their javelins causing some losses. 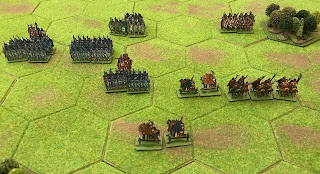 The Roman commander ordered the units on his right flank to shoot at the British, resulting in the chariots retiring out of range. 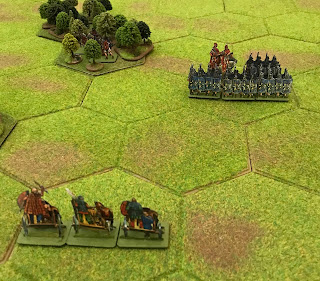 The British chieftain ordered two units on his right flank to attack the Roman cavalry. First the chariots attacked, they were slaughtered without causing ay losses to the cavalry. This attack was followed up by the British light cavalry who caught the Roman celebrating their victory, the Romans were so shocked by the attack that they turned and fled the battlefield. 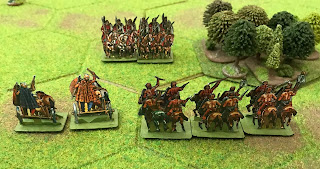 The Romans now advanced their whole line of infantry while rallying the legionaries on their left flank. However the British were to far back for the Romans to be able to contact.

Tinpotarus now ordered a mounted charge and five units of chariots charged towards the Romans.

On the British right flank, the chariots charged into the legionaries. The chariots lost three-quarters of their numbers while doing little damage to the Romans. 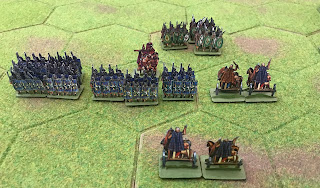 On the British left flank, led by Timpotarus himself, the chariots charged into the legionaries. 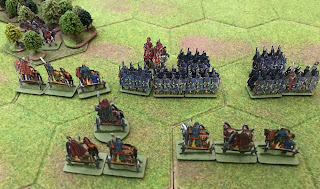 The charge wiped out the first unit of legionaries, causing their legate, Gnaeus Hostilius Aper, to flee  and then decimated a second unit. But the British chariots themselves suffered heavy loses. 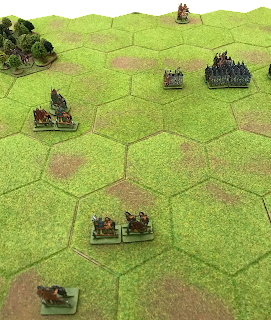 Caesar ordered a coordinated attack. The light infantry in the woods shot at Tinpotarus but with no visible effect. The decimated legionaries withdrew. The Auxilia on the Roman left flank attacked the chariots who tried to evade but were eliminated. 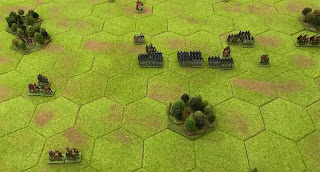 The British counterattacked. The British light cavalry on their right flank, threw javelins at the Roman Auxilia. Timpotarus charged his chariots at an understrength legionary unit. The frontal attack failed; the British chariots were slaughtered. However Timpotarus attacked with his chariots from behind and destroyed the Romans. 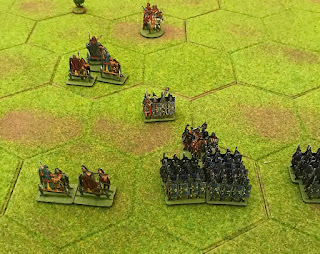 The battle was over. The British had succeeded, at least temporarily, from stopping the Romans from crossing the River Stour and thus won time for all the chieftains around Britain to gather their warbands. However the Romans had decimated the British chariot force; there would be fewer charioteers when Caesar next encountered the British in battle. 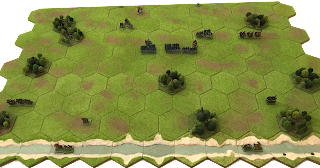