This scenario was designed to test the effectiveness of a Sopwith Snipe single-seater scout against an LFG Roland C.II twin-seater. The Snipe has two machine guns firing fixed forward compared to the Roland with one machine gun fixed-forward and a second machine gun on a ring mounting in rear cockpit with an almost all-round field of fire.

Lieutenant William Algernon "Billy the Bishop" Tempest was patrolling behind the allied lines when he spotted a Hun LFG Roland C.II Walfisch reconnaissance aircraft flying towards him. The Roland was flown by Leutnant Florian Meier with Leutnant Jörg Fritzl-Falconi as his observer, having orders to photograph a railway marshalling yard. 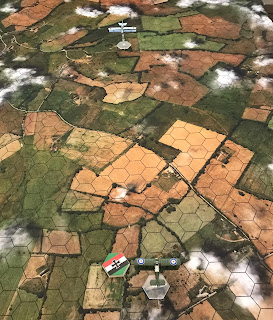 Billy the Bishop side slipped his Sopwith Snipe to his left, in order to get the Roland C,II on his right hand side, forgetting that he was no longer flying his trusty Sopwith Camel. 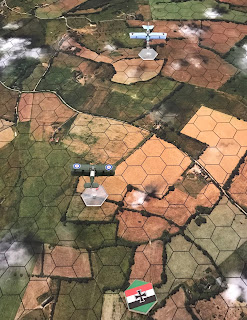 The adversaries continued to close in on each other. 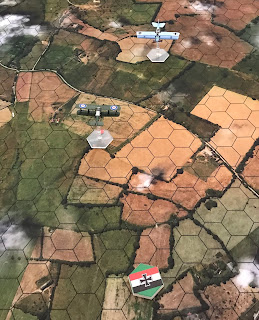 Both aircraft turned to starboard to meet each other face-on.

Meier immediately hit the gun with a hammer that he had placed strategically in the cockpit, and it immediately unjammed, probably because his mechanic had carefully checked all the bullets prior to loading for this mission.

Note: The was a special single-use "skill" obtained in a previous scenario. 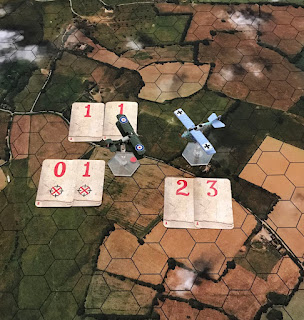 Presuming that the Hun would head for the railway marshalling yard, Billy the Bishop turned his Snipe towards the presumed target.

But Meier in the Roland had decided it was no longer a good idea to photograph his target, until he had first removed the troublesome Snipe. Taking photographs while being tailed by a Snipe was not a desired state to be in.

So Meier didn't turn for the railway marshalling yard, instead he turned behind the Snipe, giving Fritzl-Falconi's single Spandau machine gun a good shot at the Snipe. Flames started shooting from the Snipe's engine cowling.

Note: As a house rule, we only allow Aimed Fire for fixed machine guns, not for observers. 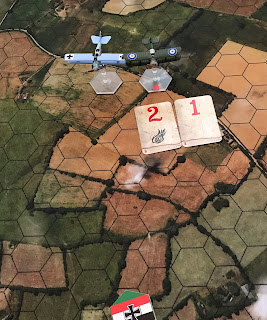 The flames shooting from the Snipe's engine cowling seemed to be having no effect on the aircraft.

Fritzl-Falconi's single Spandau machine gun got a good shot at the Snipe. However Billy the Bishop was lucky and despite all the bullets hitting his Snipe, little real damage was done.

Note: Billy used his "Luck of the Devil" skill and chose to replace one damage card with a zero. 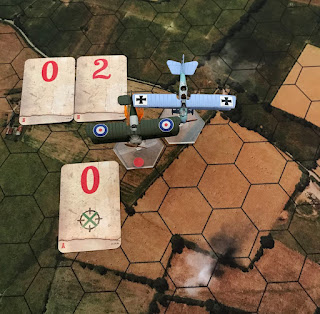 The Snipe turned to port, hoping to get a shot at the Roland, but the slower moving Roland stayed behind the Snipe. 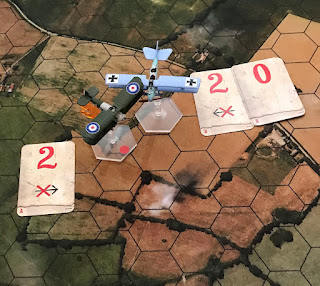 The slower moving Roland, had no problem staying out of the Snipe's field of fire. 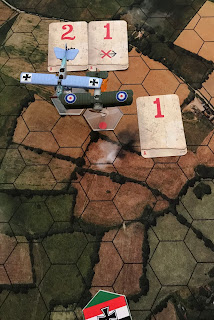 This was too much for the Snipe to take, and it plummeted flaming earthwards! 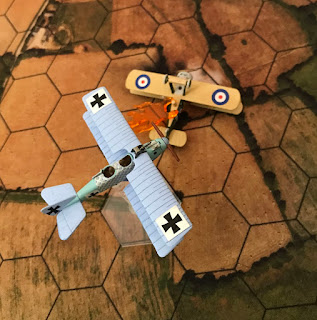 Leutnant Florian Meier lined up the Roland C.II with the railway marshalling yard while Leutnant Jörg Fritzl-Falconi readied his camera to take a photograph. 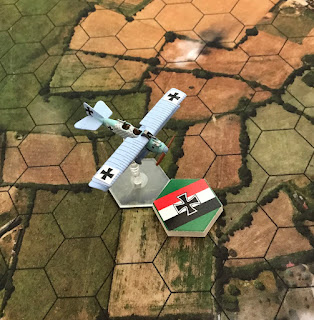 Having taken a photograph, Meier slowly circled the Roland while Fritzl-Falconi prepared the camera for a second photograph. They then flew over the railway marshalling yard for a second time to get another photograph.

Meier and Fritzl-Falconi returned to their aerodrome to a hero's welcome and celebrated with a few bottles of looted French champagne.