This is the sixth episode of a campaign representing fictitious battles in the air over the Western Front during the First World War. It was initially planned to use the Wings of Glory rules, but these were modified to use hex based movement in order to facilitate remote play over the Internet due to Corona restrictions.

One month earlier, Jörg Fritzl-Falconi had been so happy with his successful bombing mission that he had his portrait painted by the famous artist Toulouse Vinplage. He wrote a letter explaining how he had bombed and destroyed a secret photographic unit that the dastardly Engländer had hidden in a brasserie. He sent both back home to his mother, the Countess Fritzl-Falconi, who lived in the Schloss Schönbrunn.

The Countess Fritzl-Falconi was so proud of her son, that together with her lady companions, she immediately started knitting a sock to cover a bomb on which they embroidered the text Gott Strafe England. It was soon in the post on its way from Schloss Schönbrunn to her son's aerodrome on the Western Front..

Only a few days earlier, the squadron had picked up a spy from behind enemy lines and he was debriefed by the squadron commander Major Fritz Detterman. Still in the nun's habit, the spy explained that there were two huge Wunderwaffen (artillery pieces) ready to stop the St Crupelle offensive. But the sly Engländer had disguised the Wunderwaffen by covering the emplacement with camouflage netting onto which tent like structures were painted so that from the air there appears to be a simple camp.

After leaving the office, Fritzl-Falconi explained to the other two that he had just received a Bombensocke from his mother the Countess. He wanted to use it on this mission to destroy the Engländers Wunderwaffen. The problem was that the sock was rather large, too large for a bomb that the Roland C.II could carry. So Meier decided that he would fly the Gotha G.V and that they would take Freiherr Friedrich ”Dickie” von Salzbach as their third crewman and that zu Sachsen-Zenda would escort them in a Fokker D.VII. 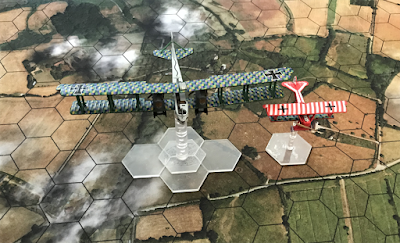 Meanwhile, on the other side of the trench lines, Captain Jack Yates (two hearts) and Alphonse Lacourt (white stripes on fuselage) were on a routine patrol in their Sopwith Camel scouts. 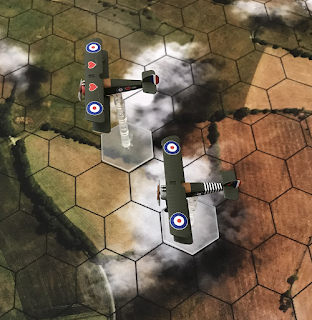 The Gotha and Fokker took off and climbed to 6,000 ft. The didn't climb higher as they needed to be able to pinpoint the target. They crossed over the trench lines. Shortly thereafter they spotted two Sopwith Camels patrolling in the distance in the vicinity of their target.

When Yates spotted the huge Hun bomber, he signalled Lacourt to turn towards the incoming aircraft and follow him down to 7 000 ft so that they retained the height advantage

Both Camels headed towards the Huns, slipping right as they did so.

The Germans continued straight ahead, the Fokker accelerated to full speed and the Gotha entered a shallow dive in order to speed up. 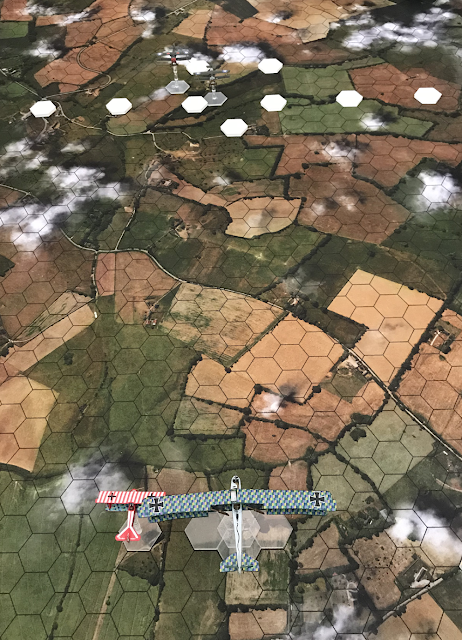 Both Camels moved straight ahead towards the Huns, while loosing altitude.

The Gotha continued straight ahead in its shallow dive, and the Fokker did some fancy manoeuvring to stay next to the Gotha. 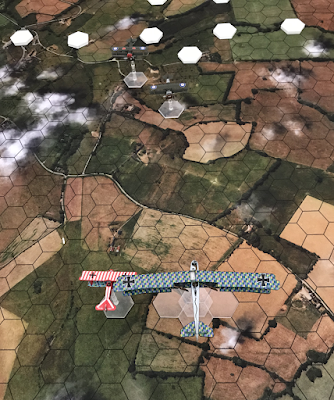 The Gotha continued straight ahead in its shallow dive.

Yates in two-hearts continued straight ahead. Both gunners in the Gotha aimed at Yates, but the altitude difference made shooting impossible.

Lacourt in the other Camel slipped right behind Yates.

Erbprinz Rupprecht zu Sachsen-Zenda in the D.VII slipped left and then turn in right.

The D.VII opened fire on Yates causing slight damage to the Camel.

Lacourt opened fire on the D.VII doing some damage, but then his machine-guns jammed. Could it be that Corporal Boyd, the erk, had forgotten to remove the golden bullets from Lacourt's guns. Perhaps the bottle of wine that Half Pint had tossed to Boyd, had caused him to forget his duty. 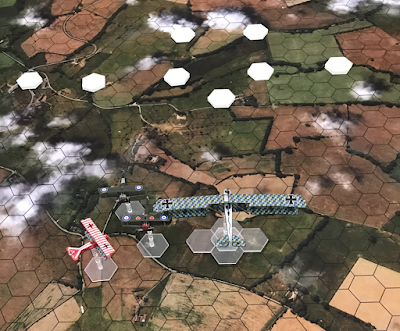 The Gotha continued straight ahead in its shallow dive while the Camels continued to dogfight with the Fokker overhead.

Lacout turned his Camel sharply to the right, while trying to un-jam his machine-guns.

Yates in the "two-hearts" Camel performed a half-loop.

Rupprecht zu Sachsen-Zenda slipped his D.VII to the right. 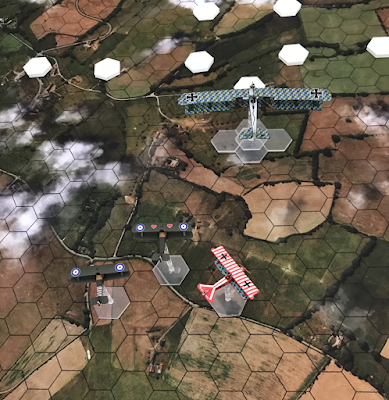 The Gotha turned right towards the target.

Yates in the "two-hearts" Camel performed another half-loop.

Lacourt turned right then left while at the same time succeeding in un-jamming his machine-guns. 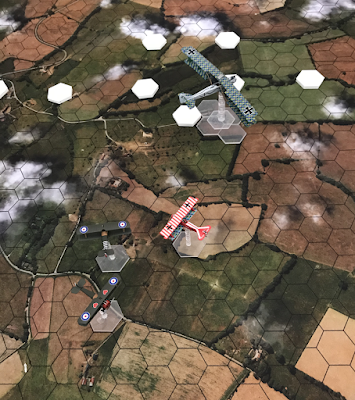 The Gotha flew straight and level over the target. The white hex was turned over to reveal that it was the actual target.

The D.VII turned right, following after the Gotha.

Lacourt turned right onto the tail of the D.VII and opened fire.

Yates turned as sharply as possible to the left and even he opened fire on the D.VII. 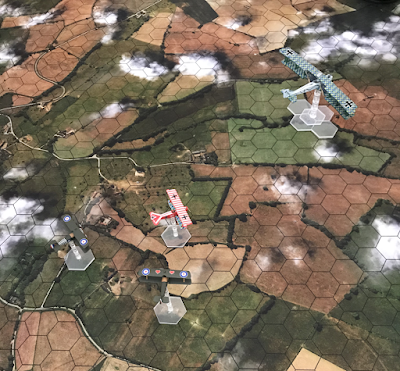 "Bomben weg!" shouted Jörg Fritzl-Falconi as they crossed over the target.

The D.VII flew straight ahead while somehow managed to confuse Lacourt on his tail who turned away, but Yates slipped right and continued to fire into the D.VII. 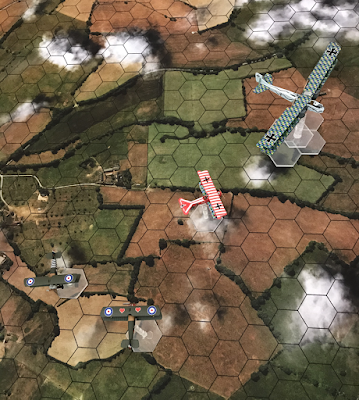 The Gotha continued to turn slowly right, heading for home.

Despite his damage, Rupprecht zu Sachsen-Zenda half-looped his D.VII to return to the dogfight and protect the Gotha. Lacourt turned his Camel sharply right and came face-to-face with the D.VII and they both opened fire.

Yates missed the D.VII's half-loop and overshot his enemy. Jörg Fritzl-Falconi, in the Gotha's front gunner position, aimed his Parabellum machine-gun at Yates' Camel but the altitude difference was to much for him to be able to hit anything. 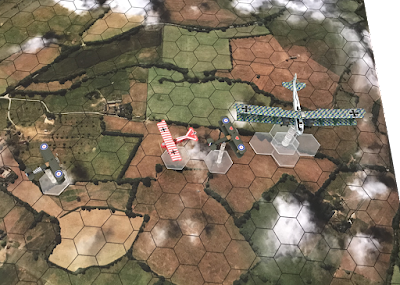 The Gotha headed straight homeward bound in a shallow dive for maximum speed.

The D.VII turned back towards the Gotha, which confused the Camels who had expected the dogfight to continue. 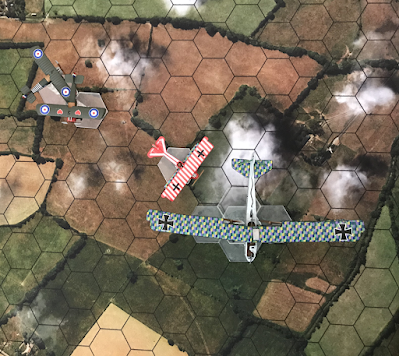 The Gotha headed straight in its shallow dive for maximum speed and the D.VII turned to follow the Gotha. 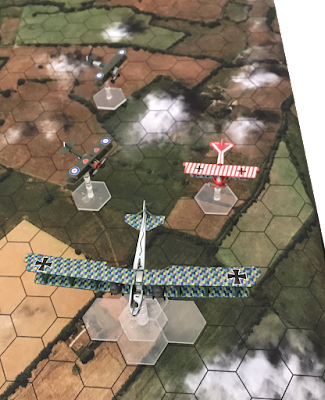 Both the Gotha and the badly damaged D.VII were heading straight home as fast as they could.

But Yates managed to get on the tail of the D.VII and opened fire. The D.VII could take no more punishment, and plummeted into the ground killing Erbprinz Rupprecht zu Sachsen-Zenda.

Rupprecht zu Sachsen-Zenda had courageously taken on both Camels in order to distract them from the Gotha's mission and thus allowing the Gotha to successfully bomb the Engländers Wunderwaffen. 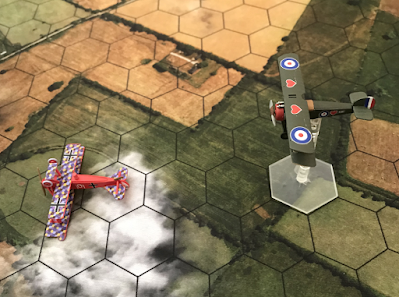 The Gotha was now far ahead of the Camels and was crossing over its own trench line. More Fokkers could be seen diving down towards the Gotha so Yates and Lacourt turned away, satisfied that they had downed a Fokker D.VII.

Back at the KuKuK Jagd-Schlachtstaffel's aerodrome, the Gotha's crew went into the dining room where they met the other of the two identical men who both had claimed to be the heirs of Sachsen-Zenda. They explained that the other claimant had been shot down and killed by die Engländer. There and then, Erbprinz Rupprecht zu Sachsen-Zenda vowed to go out and avenge the death of his brother. He explained that it was obviously his brother who was the illegitimate son and had no valid claim to the title and certainly not to the fortune, but it did not matter now and that his death would be avenged.