This is the second episode of a campaign representing fictitious battles in the air over the Western Front during the First World War. It was initially planned to use the Wings of Glory rules, but these were modified to use hex based movement in order to facilitate remote play over the Internet due to Corona restrictions.

Spring 1917 – A spy has reported the location of an elite British photographic unit to the German High command. It has been placed in a converted brasserie, Les Trois Magots, in the small French village of Saint-Benoît-du-Saucisse, a fair way behind the front lines. It is used to develop the photographic plates taken by photographic reconnaissance aircraft and also by analysts to interpret the photographs for the British General Staff.

Because of the importance of the target, the High Command task the crack Kaiserliche und Königliche und Kaiserliche Jagd-Schlachtstaffel with the job of destroying the brasserie. Before dawn, Squadron Leader, Major Fritz Dettermann calls to his office his most experience two-seater pilot, Florian Meier and his Austro-Hungarian observer Jörg Fritzl-Falconi. He tells them to take off at dawn in the squadron’s Roland C.II and to bomb Les Trois Magots in order to put the British Photographic unit out of business. As it is know that the dastardly Premier Escadrille International will be operation in the area, he promises Meier that he will be escorted by two Albatros scouts.

At the crack of dawn, as the first beam of light appeared over the horizon, Meier and Falconi started up their Roland and beside them was Erbprinz Rupprecht zu Sachsen-Zenda in his Albatros D.V. Udo Lockbach should have been flying a second Albatros, but Lockbach was nowhere to be found. As the mission took off, one aircraft short, they were waved at by rider entering the aerodrome; what appeared to be a rather dishevelled German cavalry officer. They climbed quickly to 10,000 feet and then headed west towards Saint-Benoît-du-Saucisse. 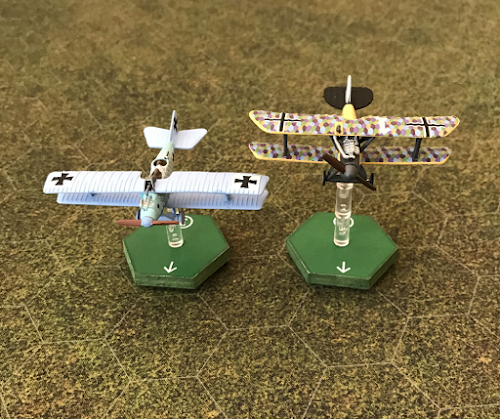 As per their standard operation procedure, the Premier Escadrille International sent up a dawn patrol over the village of Saint-Benoît-du-Saucisse at 15,000 feet. The patrol was led by Captain Jack Yates in his Sopwith Camel, still merry after his kill the day before. Yates’s wingman was the French aviator, Alphonse Lacourt. Lacourt’s SPAD had been damaged on landing the day before, so he was loaned the squadron’s Sopwith Triplane. 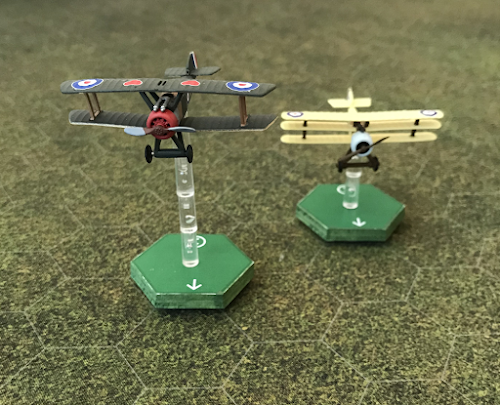 Yates spotted the Huns and followed by Lacourt had descended to 12,000 feet when the Huns saw the diving scouts.

The Roland C.II continued to make a beeline for the target as the pilots closed the distance between their aircraft. 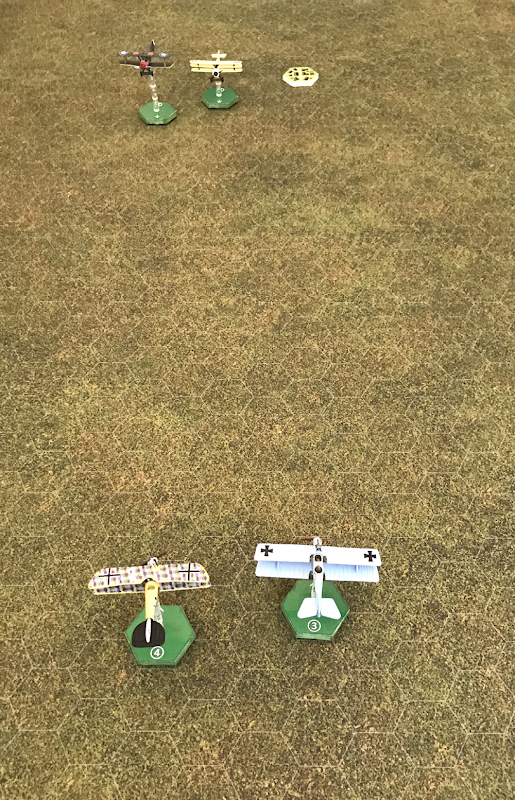 The aircraft continued towards each other with both the Camel and the Albatros accelerating in front of their companions. 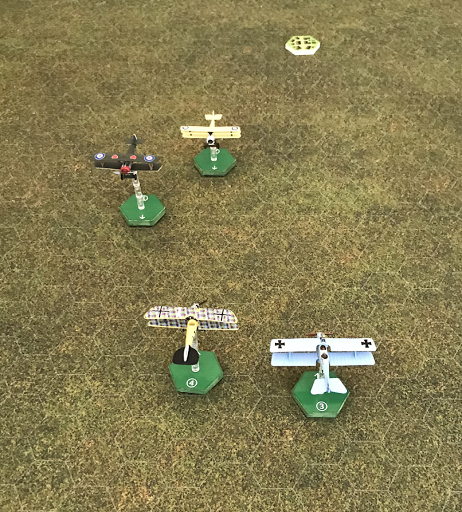 The Camel and the Triplane turned in to intercept the Roland. The Roland expecting that manoeuvre turned away. The Albatros got onto the tail of the Triplane and Erbprinz Rupprecht zu Sachsen-Zenda opened fire.

Jörg Fritzl-Falconi, the Roland's observer, opened fire on Yates's Camel but his Parabellum MG14 machine gun jammed before a single bullet had left its barrel. "Scheisse!!" he shouted, and then he decided "Sabotage!!". 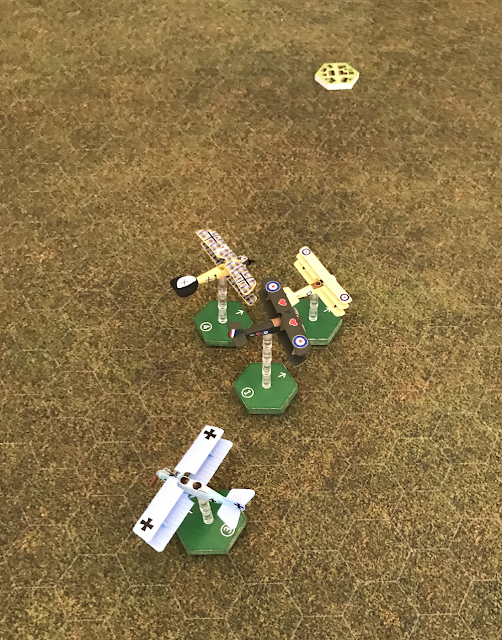 Despite being tailed, Alphonse Lacourt managed to turn his Triplane so tightly that the Albatros couldn't stay on his tail.

Jörg Fritzl-Falconi signalled to his pilot, Florian Meier, that he had a jammed gun and needed time to un-jam it. So Meier flew the Roland directly away from the enemy straight and level while Fritzl-Falconi desperately attempted to un-jam his Parabellum.

Yates had guessed where the Roland was heading, but it took him a little too long to turn his Camel. 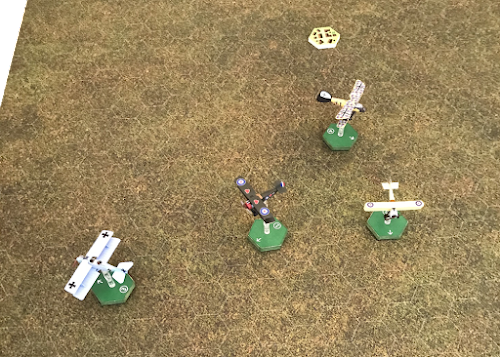 The Albatros and Triplane were flying round in circles trying to get a shot at each other.

Yates in the Camel got a snap shot at the Roland and Meier got off a quick burst as the Camel rushed past his nose. 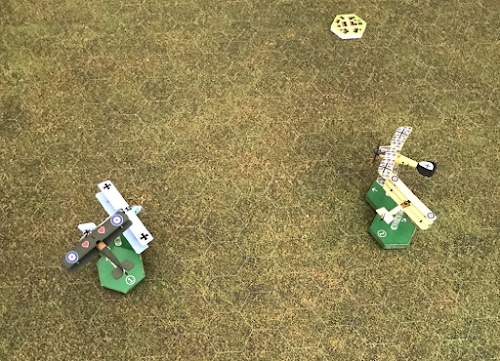 The Albatros and Triplane now met head-on, so Erbprinz Rupprecht zu Sachsen-Zenda and Alphonse Lacourt opened fire at each other at short range.

Meier turned the Roland back towards the target, but the cunning Yates was on his tail in the Camel. 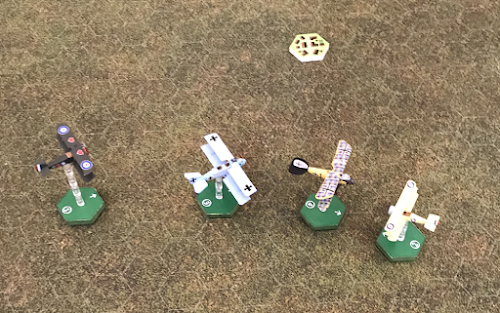 Meier turned the Roland towards the village of Saint-Benoît-du-Saucisse, but Yates was going too fast in the Camel and overshot. 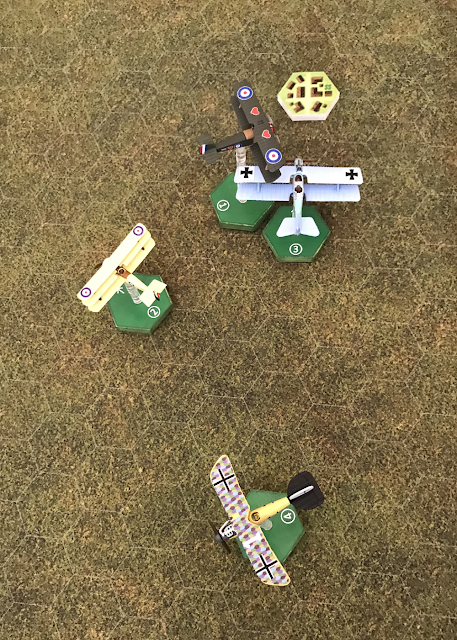 The Albatros and Triplane were, yet again, flying round in circles trying to get a shot at each other.

Meier flew as straight and steady as he could towards he village of Saint-Benoît-du-Saucisse and when they were over Les Trois Magots, Fritzl-Falconi dropped the bombs right on target. Immediately after Fritzl-Falconi had shouted "Bomben weg!!", Meier put the Roland into a tight right turn; at least as tight as the lethargic Roland could manage.

Luckily for the Roland, Meier's tight turn caused Yates in the Camel to overshot yet again. 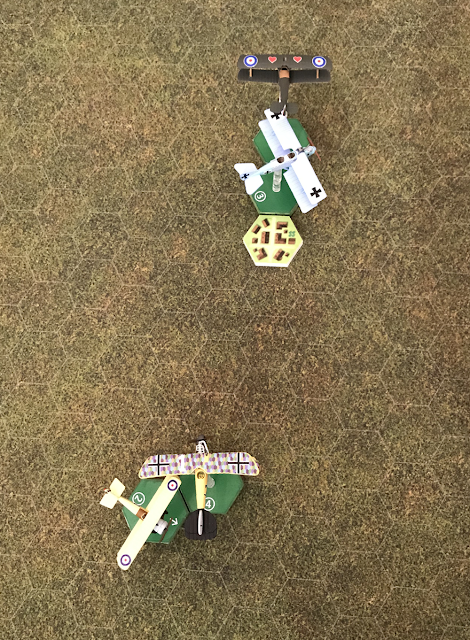 Now unencumbered by bombs, the Roland turned tighter and dived at the same time. Yates turned again onto the Roland's tail but was too high to get off a good shot.

Erbprinz Rupprecht zu Sachsen-Zenda accelerated in the Albatros and came speeding to the assistance of the Roland leaving Alphonse Lacourt in the slower Triplane behind.

The Albatros fired at the Camel. 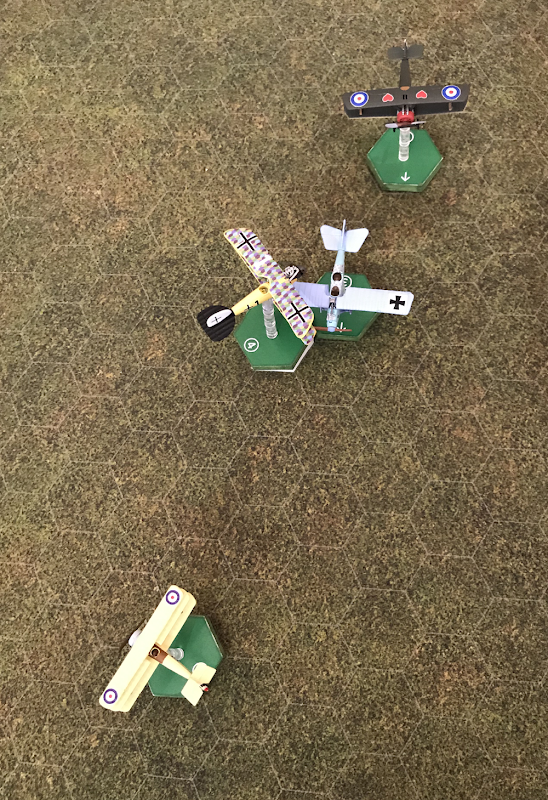 Having completed the mission, Florian Meier put his Roland into a steep dive back towards the German front line. Jörg Fritzl-Falconi scanned behind them looking for a target, but they had too good a start for the somewhat shot-up enemy to catch them, especially with the Erbprinz Rupprecht zu Sachsen-Zenda protecting their tail in his Albatros. 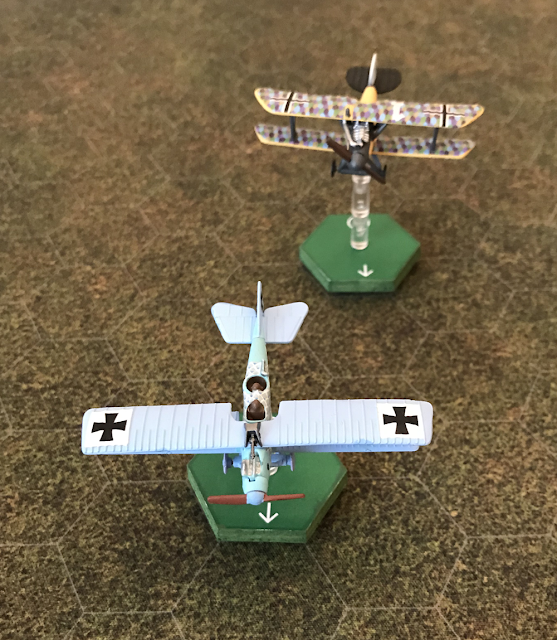 Jörg Fritzl-Falconi was so happy with his successful bombing mission that he had his portrait painted by the famous artist Toulouse Vinplage. He wrote a letter explaining how he had bombed and destroyed a secret photographic unit that the dastardly Engländer had hidden in a brasserie. He sent both back home to his mother, the Countess Fritzl-Falconi, who lived in the Schloss Schönbrunn.

At the Premier Escadrille International's aerodrome one riddle was solved. Who was the shadow that Lieutenant Lugeau has seen sneaking around after dark? All of the pilots were drunk in the mess, so it couldn't have been one of them. Finally the riddle was solved; it was Malcolm the squadron mascot. Malcolm, the goat, was put into his pen every night by his handler, an Erk named Boyd. But what Corporal Boyd didn't know, was that Malcolm could open the gate whenever he wanted, and wandered round the aerodrome looking for something to chew on.