This is the sixth scenario in a Battle of Britain campaign that follows the exploits of the fictitious Country of Dampshire 369 Squadron Auxiliary Air Force. We use the Wings of Glory WW2 rules, slightly modified to give faster play, together with our own set of campaign rules. We use the Wings of Glory planes where the right model is available, other manufactures are used to fill in the gaps.

Blenheim bomber squadrons operated throughout the Battle of Britain, often taking heavy casualties, although they were never accorded the publicity of the fighter squadrons.

During the weeks between Dynamo and the Kanalkampf there were more British bombers over the continent than there were Luftwaffe bomber over England.

Bombers raided German airfields in occupied France throughout June to December 1940, both during daylight hours and at night. On 1 August 1940, 12 Blenheims were sent to attack Haamstede and Evere, destroying or heavily damaging three Bf 109s on the ground while two more Bf 109’s were claimed by Blenheim gunners. 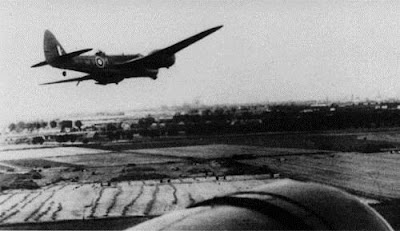 Pilot Officers Cholmondeley Featherstonehaugh (having returned from Calais in an RNR motor launch a few days earlier) and Pilot Officer Sir Price were both sitting in the dispersal hut reading old newspapers when they saw two brand new Bristol Blenheim Mk IVs land. “It’s a much better model than the old Mk I” said Cholmondeley, “something dicey must be afoot”.

Very soon after he was proved right, he and Sir Price were called to the briefing room where they saw the Squadron Intelligence Officer Squadron Leader Foxy Moron talking with the bomber pilots; ”Banger” Walls and Brett Sinclair.

Foxy explained the plan. “You will take off before dawn and escort these chappies over the channel where they will bomb the Krauts while they are still eating breakfast. Shake them up and then back here in time for a pint of Guinness for lunch”. “We’ve got two new Hurricane Mk II’s” said Foxy “and they have armour behind the pilot’s seat, not that you’ll need it old boys, but you might as well take them out for a spin”.

Early the next morning, the pilots were woken up with a mug of sweet strong tea. They rushed to the mess for quick breakfast of toast, bacon and eggs only to find out that someone had eaten all the bacon.

Climbing into the still dark sky, all Sir Price could think about was the bacon. Who had eaten it? Was it those dastardly fitters living in the bell tents or could it have been Foxy’s troublesome dog?

They crossed the channel at wave level and climbed slightly when they reached the French coast to give the bombers a good run it at the airfield. Flying eastwards into the now rising sun was not good for spotting, but soon Banger swore into the radio “Shit, there’s a couple of Huns up there in the sun”. 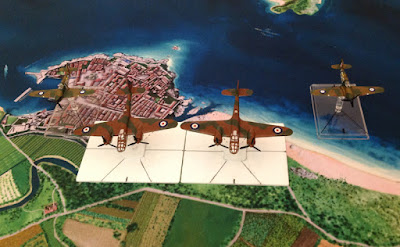 The 109s made a head-on pass at the bombers, hoping to make them break formation. Once through they turned around hoping to get on the bombers' tail. This tactic took Cholmondeley and Sir Price by surprise.

Sir Price's opening moves in this duel were poorly thought out. First he turned in front of the 109s and then when he had a chance to tail he turned in the wrong direction. Was he still dreaming about the bacon or had his rudder jammed. 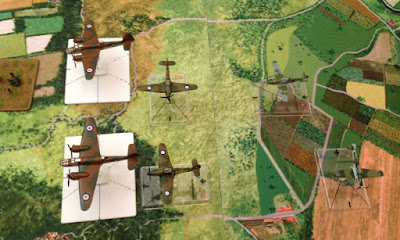 The bombers droned on towards the target airfield, now coming under fire from the airfields Flak defenses. A swirling dogfight then occurred with the fighters. Adolf Halland shot down Cholmondeley but when doing so he was so concentrated on his target that he was jumped by Sir Price. Halland was wounded and his engine started leaking glycol. Deciding he was done for the day, he dived out of the fight without Sir Price being able to follow. 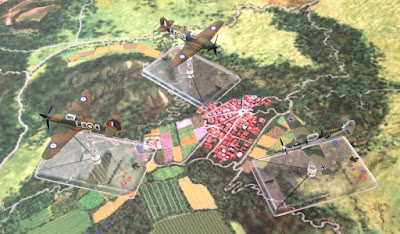 Brett Sinclair had trouble finding the target but was saved from disaster by is bomb aimer quickly explaining the difference between starboard and port. Brett managed a near miss on the hangers, which started fires and caused damage. Banger scored a direct hit on the operations block, which had previously been a girls' school. 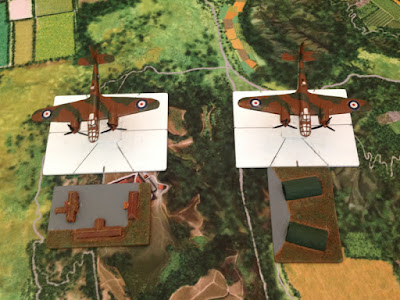 Oberleutnant Sepp Schlangenaugen had damaged both Blenheims and wounded Banger's rear-gunner, but had himself taken severe damage from the crossfire he had been forced to endure. Like Halland, even Sepp dived out of the fight. 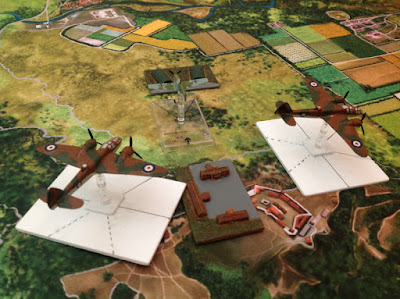 The bombers again came under fire from the airfield defence Flak. Sir Price strafed the Flak but it continued to fire. When the bombers passed over the Flak, they both fired at it causing the Flak gunners to dive for cover and stop shooting.

Banger sped for home and landed well before Brett. In addition to a direct hit with his bombload, he also claimed the kill of the anti-aircraft gun. When he noticed Brett coming in for a landing, he shouted "To celebrate, the drinks are on me in the Mess". Brett's landing when unnoticed, there was noone there to greet him.

Previously we had being flying the Blenheims on Ju87 stands, but now I have made a new prototype stand for them out of plasticard. The stand is the same size as that used for the Messerschmitt Bf 110, twice as wide as the normal stand, making them bigger targets than single-engine planes.
Posted by Keith at 8:54 PM