This is episode three of a fantasy dungeon crawl using dungeon tiles from DMB Games and the Swords and Wizardry “Old School D&D” rules.

The party were in a dungeon under a stepped temple on an island. They had managed to rest for the night in a room behind a stone steam breathing dragon statue. The room had one, as yet unopened, door.

As the party opened the door, they saw a 20ft square room. In a niche in the left hand wall stood a strange large figure which slowly came to life as the party peered into the room 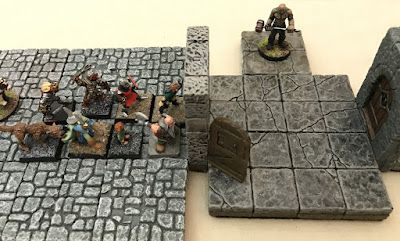 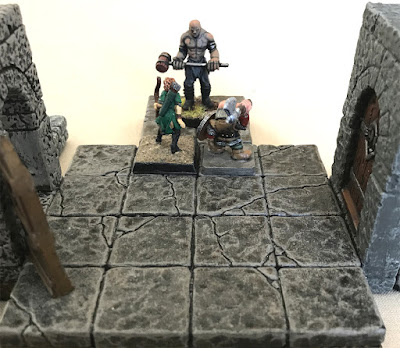 They were soon supported by Wildbladder and Bathenwells. The Flesh Golem fought fiercely. The rest of the party rushed into the room and the Flesh Golem was defeated. 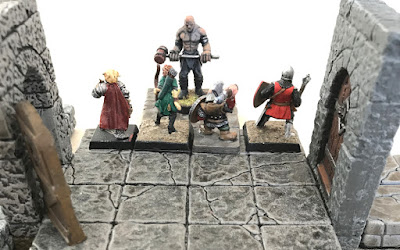 One the far side of the room was another door, which after Frito checked for traps, was opened. Through the door was a large throne room with 4 large trolls and 2 smaller. 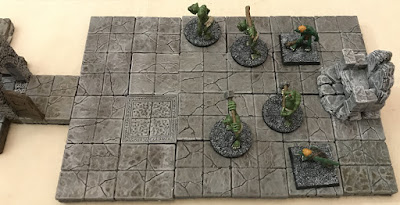 Frito blew a long steady note on his Silver Horn of Valhalla and five berserker warriors were summoned to fight the trolls.

The party charged in to attack the trolls and a general melee occurred. Kranoval shot a lightning bolt straight through two trolls. After a while the first troll was chopped to pieces and went down. But yet again the party forgot about the regeneration and after a while, the refreshed troll jumped up to fight again with his comrades.

Finally the party had learnt it's lesson, and Misdora and Kobbe went round burning the trolls one by one as the party killed them,so they didn't have a chance to return to life. 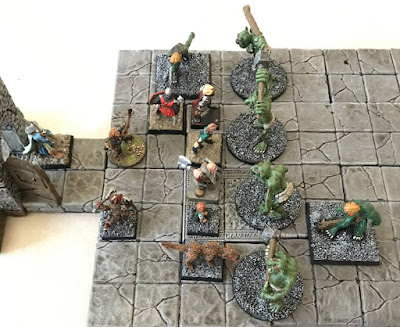 With the trolls finally dead and smouldering nicely, the party searched the throne room.

In the bottom of the throne, Frito found a secret compartment containing 3 potions.

In the ceiling of the room there was a shaft going up. Light could be seen at the top of the shaft. A silken rope was hanging down the shaft.