This is the fourth scenario in a Battle of Britain campaign that follows the exploits of the fictitious Country of Dampshire 369 Squadron Auxiliary Air Force. We use the Wings of Glory WW2 rules, slightly modified to give faster play, together with our own set of campaign rules. We use the Wings of Glory planes where the right model is available, other manufactures are used to fill in the gaps.

Om 23rd May 1940 the first documented dogfight between a Bf 109 and a Spitfire occurred. Squadron Leader F. L. White commanding No. 74 Squadron had engine trouble and was forced to land at a French aerodrome near Calais in the path of the advancing panzers.

Leathart found White hiding in a ditch avoiding the German tanks, picked him up, and headed home at 6ft above the Channel.

The escorting Spitfires were in combats with Messerschmitt 109s resulting in three confirmed 109s killed for no Spitfire losses. Reporting on the battle, Al Deere (one of the Spitfire pilots), stated that the 109 climbed better than the Spitfire but the Spitfire could out-turn the 109.

Shortly afterwards, King George VI visited the Spitfire Wing at Hornchurch and presented Leathart with a DSO for pulling off the remarkable rescue. By which time Deere had 5 kills and the King presented him with his first DFC.

News reached the 369 Squadron officers' mess, that the intellegence officer Squadron Leader Foxy Moron was stranded in France at an old French aerodrome which was unfortunately in the path of the German panzers.

Flying Officer William ”Half Pint” Carruthers jumped up, spilling most of his whisky, and declared “Foxy's a good chappie, I will go and get him in the Maggie”. Pilot Officers Cholmondeley Featherstonehaugh & Emmett Hollingberry immediately offered to fly escort in their Spitfire Mk Is. With the Miles M.14 Magister in the lead and the two Spits forming the ”Vic” they left for France.

Half Pint landed at the aerodrome while the Spits circled providing cover. Foxy was found sitting in the aerodrome bar, with a large glass of Pastis in his hand. Half Pint could only persuade him to leave his drink, by grabbing two full bottles from the bar and promising a new drink in the Mess at home. Foxy picked up his two large hold-alls and followed Half Pint out to the Maggie.

They took off and headed towards the channel with the two Spits patrolling ahead.

Two Messerschmitt Bf 109 E-3s (Oberleutnant Sepp Schlangenaugen and Leutnant Adolf Halland) were performing a sweep looking for targets of opportunity. They saw the Spitfires and headed directly towards the first flown by Featherstonehaugh. Hollingberry being too far behind to offer support.

The canon fire at close range was devastating and Featherstonehaugh's Spit was riddled with holes and he had to bale out to save himself as it hurtled towards the ground. 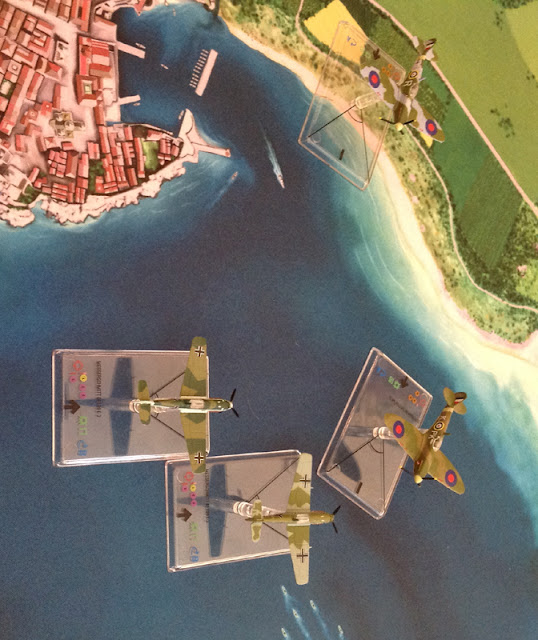 A swirling dogfight then occurred, with Half Pint in the unarmed Maggie trying to avoid the 109s while creeping towards the coastline in is slow plane. Hollingberry tried hard to distract the Huns. Half Pint was lucky and managed to dodge most of the fire from the 109s.

As the Maggie crossed the coastline and headed out over the channel, the German pilots decided that the Spitfire was a more honourable target and turned their attention to Hollingberry.

The two 109s made quick work of the already damaged Spitfire and Hollingberry had no choice but to bale out as his engine gave up and the plane dived towards the ground. 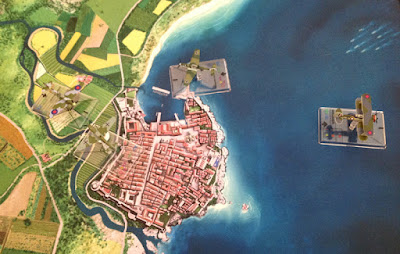 Featherstonehaugh parachuted safely and was spotted by a BEF dispatch rider who gave him a lift to Calais where an RNR motor launch gave him a ride back across the channel. He was back home in time to enjoy a slap-up breakfast.

Hollingberry hit his head when he baled out and landed in a field full of Germans. He was captured. The Germans were in a hurry to reach the channel coast, and during a moments inattention, Hollingberry slipped away. He was helped by the French to reach Normandy from where he could cross the channel.

Half Pint got the Maggie safely home and unloaded Foxy and his two hold-alls. Leading Aircraftman Walker, a fitter, carried Foxy's bags to his room. Walker's curiosity got the better of him and he looked inside, the bags seemed to contain rolled up dokuments. Walker wondered if they were secret maps, but didn't have a chanced to snoop any more. Half Pint installed Foxy in the Mess with his two bottles of Pastis. Shortly afterwards, King George VI visited 369 Squadron and presented Half Pint with a DFC for pulling off the remarkable rescue.

Both Messerschmitts returned safely. Schlangenaugen and Halland celebrated their kills with a bottle of captured Congac.

British Victory - the Maggie made it home safely

I could not find a 1/200th scale model of the Miles M.14 Magister "Maggie", so we had to made do and used the Gladiator instead.