This is the third scenario in a Battle of Britain campaign that follows the exploits of The Country of Dampshire 369 Squadron Auxiliary Air Force, a fictitious squadron that didn't exist during the Battle of Britain. We use the Wings of Glory WW2 rules, slightly modified to give faster play, together with our own set of campaign rules. We use the Wings of Glory planes from Ares where the right model is available, other manufactures are used to fill in the gaps.

In early September of 1939, two AAF squadrons flew Gloster Gladiators in France: The County of Durham 609 Squadron and the County of Surrey 615 Squadron. They reequipped with Hurricanes just in time for the German offensive.

On 18 May 1940, a Luftwaffe bombing raid destroyed many of the BEF's Gladiators and Hurricanes on the ground at Vitry-en-Artois, and airfield near the Pas-de-Calais.

It is possible that some of the British planes got off the ground in time to defend their airfield. 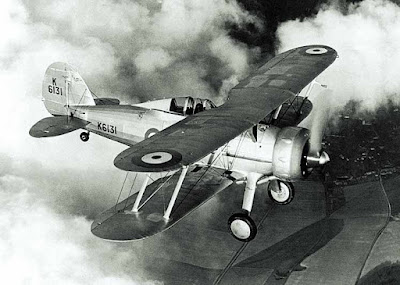 The first attack wave had destroyed many planes on the ground and caused chaos among the French ground troops but two brave British pilots ran through the chaos to the planes.

One Hurricane Mk I (Pilot Officer Cholmondeley Featherstonehaugh) and one Gloster Gladiator (Pilot Officer Sir Price) got off the ground and climbed upwards from the smoke-filled airfield when they saw the second wave of Germans arriving.

One Messerschmitt Bf 109 E-3 (Oberleutnant Sepp Schlangenaugen) and one Dornier Do 17 (Oberleutnant Hans von und zu Missendorff) were heading towards the airfield, guided by the smoke from the damaged hangers. 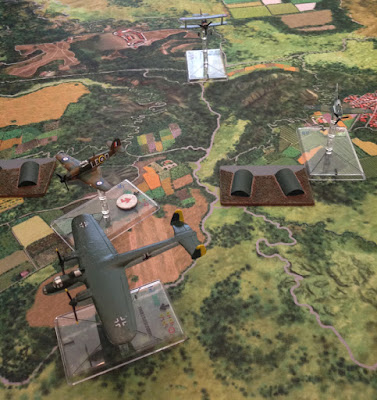 Featherstonehaugh made a pass at the Dornier despite Schlangenaugen’s attempts to deflect him. The Dornier was damaged and Schlangenaugen’s engine started leaking oil. Sir Price’s Gladiator was slow and had problems catching the Germans.

The Dornier continued straight and level and dropped its bombload right in the middle of the one undamaged hanger destroying both it and the planes it contained. The Dornier jumped as the bombs fell and turned immediately for home. Hans von und zu Missendorff flying the Dornier had been concentrating too much on bombing the hanger giving Featherstonehaugh a chance to get on its tail. Featherstonehaugh’s eight machine-guns did enough damage so that the Dornier crash landed in a nearby field but a parting shot from the Dornier’s rear gunner hit the Hurricane which started smoking.

Having greased his Dornier down in the field, Oberleutnant Hans von und zu Missendorff and his crew climbed out, shaken but otherwise unhurt. They were immediately captured by the local Gendarmerie and taken back to a nearby village. A few days later, a Panzer division heading for the coast rescued them from the French and returned them to their squadron.

Draw - Germans bombed successfully but the British got one kill

There are no Dornier 17 bombers in the Wings of Glory range so we used metal models of Dornier 17's from the Skytrex Action 200 range. Skytrex don't say what model and I had assumed it was the Z model which was used during the battle. Unfortunately it was the earlier model without the enlarged nose (looks to me like the E-1) it was used in the Spanish Civil War and even in the Polish campaign although by that time it was outnumbered by both the P and Z variants.