This is the seventh scenario in a Battle of Britain campaign that follows the exploits of the fictitious Country of Dampshire 369 Squadron Auxiliary Air Force. We use the Wings of Glory WW2 rules, slightly modified to give faster play, together with our own set of campaign rules. We use the Wings of Glory planes where the right model is available, other manufactures are used to fill in the gaps.

The Admiralty persisted in continuing with a traditional coastal trade, forming merchant ships into convoys protected both by convoy escorts (usually destroyers) and air cover from Fighter Command. The Germans could not resist attacking such juicy targets. This part of the battle was known as kanalkampf. There was actually no real need for the British to run convoys through the Channel and the straights of Dover, the cargo could have been sent on the railroads. 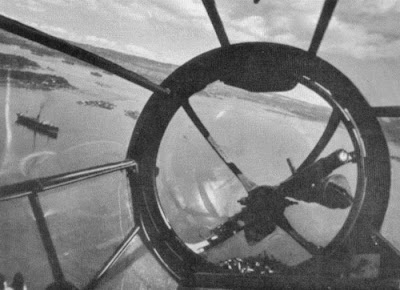 From the RAF’s point of view the campaign was not what Fighter Command had prepared for; pilots involved in dogfights risked drowning when they took to their parachutes, because the RAF had no air sea rescue service to put into operation, whereas the Germans had He59 float-planes for this purpose.

The German attack against coastal shipping had started at the beginning of July. However, the official date of the beginning of the Battle of Britain was fixed on July 10th. On this day, Dornier bombers protected by Bf 109 fighter attacked a convoy defended by Hurricanes. One ship was sunk,

E-boats had spotted and attacked a convoy sailing up the channel. The Krigsmarine reported it to the Luftwaffe who planned an attack the next day, by which time the convoy should be in the narrowest part od the channel and near to the German airbases on the French coast.

Oberleutnant Hans von und zu Missendorff and Leutnant Hermann Stahlhelm would fly the attacking Dornier Do 17 Zs. Oberleutnant Sepp Schlangenaugen and Leutnant Adolf Halland were in the Fatherland being awarded the Iron Cross after both becoming aces, so the less experienced Oberleutnant Freiherr C.G.Sommarlath and Leutnant Otto von Dasshausen were tasked with escorting the bombers in their Messerschmitt Bf 109 E-4s.

The RAF had been flying standing patrols over the convoy all the way up the channel.

Foxy Moron and ”Half Pint” Carruthers were in Foxy's quarters pouring over the rolled-up oil paintings of nubile ladies which they had rescued from the Low Countries. The telephone in the dispersal hut rang, and 369 squadron was tasked with sending up a section of fighters to patrol over the convoy as it steamed between Dover Calais. Pilot Officers Cholmondeley Featherstonehaugh and Sir Price were in the hut teasing the Intelligence Officer's troublesome dog. As "Half Pint" couldn't be found, they decided that two Hurricane Mk IIs would be good enough to see off Jerry.

The Germans headed towards the convoy in a formation of Teutonic precision. Cholmondeley and Sir Price were having trouble holding formation; was Sir Price still worrying about the lack of bacon in the Mess and not concentrating on his flying? 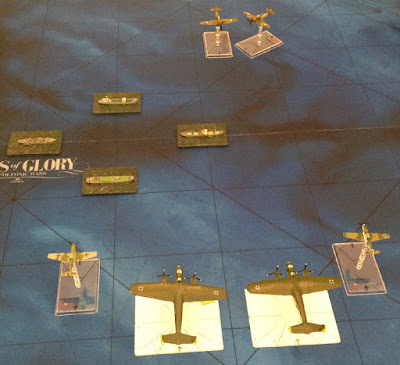 Sir Price’s lack of concentration (or was it lack of bacon) caused a collision with Cholmondeley and both their wingtips were damaged before they even had come into contact with the Krauts. The Germans were now lined up for their bombing run and strafed the ships in the hope of silencing their anti-aircraft fire. 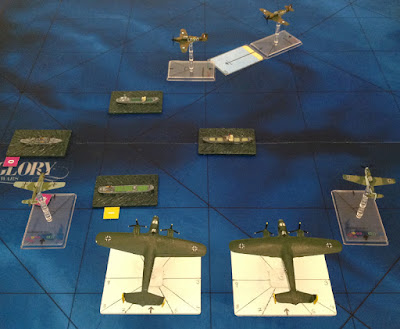 The bombers dropped their loads but had never practiced against naval targets. The ships were very narrow and the bomb-aimers were only used to stationary targets resulting in a poor show: one near miss slightly damaging the target and one complete miss. 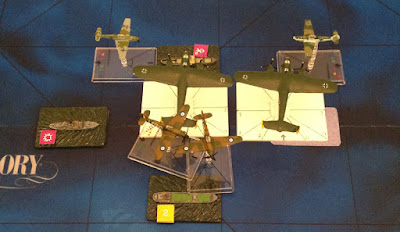 Perhaps it was inexperience or perhaps the bomber crews had been distracted by the Hurricanes. A confused dogfight now occurred as the bombers tried to turn for home and the safety of their base.

Although the 109s did their best to distract the Hurricanes it didn't work and Sir Price and Cholmondeley concentrated their fire on the bombers.

Sir Price hit his bomber which was last seen diving out of control with flames from both engines heading towards Calais. However a lucky parting shot from the Dornier's rear-gunner damaged the Hurricane severely and Sir Price had no choice but to ditch. Luckily he could pick his spot and landed near one of the convoy ships which sent out a whale boat to pick him up. 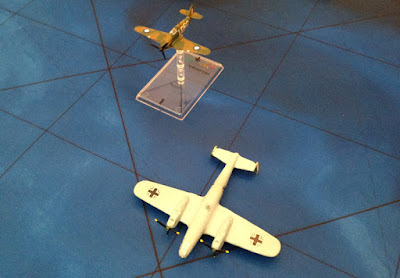 Unfortunately for Cholmondeley he was so concentrated on the bomber that he forgot to watch his own "six". Oberleutnant Freiherr C.G.Sommarlath in his 109 pounced on Cholmondeley who didn't stand a chance. Cholmondeley only made it back over land by a whisker before his Hurricane gave out. Deciding there and then that he didn't want to end up in the ice cold waters of the Channel, he resolved to write to his uncle as soon as he got back to his quarters, asking for a transfer to warmer climes - ideally the Bahamas Squadron!

Leutnant Otto von Dasshausen was heading back into the dogfight to help Sommarlath when a lucky shot from the anti-aircraft guns on the destroyer protecting the convoy hit Dasshausen's 109 who had to ditch in the channel.

Previously we had being flying the Dorniers on Ju87 stands, but now I have made a new prototype stand for them out of plasticard. The stand is the same size as that used for the Messerschmitt Bf 110, twice as wide as the normal stand, making them bigger targets than single-engine planes.

The ships used are 1:1200 scale models from Hallmark sold by Magister Militum.