This is the fifth scenario in a Battle of Britain campaign that follows the exploits of the fictitious Country of Dampshire 369 Squadron Auxiliary Air Force. We use the Wings of Glory WW2 rules, slightly modified to give faster play, together with our own set of campaign rules. We use the Wings of Glory planes where the right model is available, other manufactures are used to fill in the gaps.

All British eyes by now were focused on Dunkirk and Operation Dynamo. The great evacuation was reaching its peak. Initially it was hoped to rescue 50,000 troops but contrary to expectations up to 40,000 troops a day were being taken off. However, the waiting men, standing in long queues on the beaches, were having a very trying time. There can be few worse experiences than standing in disciplined lines for hours on end while being strafed and bombed.

The Luftwaffe had had it very easy fighting out-of-date and ineffective air forces, but Dunkirk came as a bit of a shock when the now came into contact with aggressive pilots in modern airplanes. 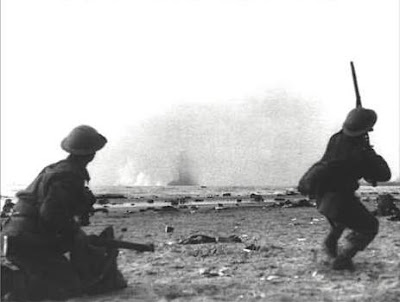 The BEF was retreating to Dunkirk and being evacuated from the beaches. No. 369 Squadron was tasked with putting a standing patrol over Dunkirk to protect the retreating army and the troops on the beach. Flying Officer William ”Half Pint” Carruthers and Pilot Officer Sir Price took the first patrol in their Spitfire Mk Is.

Hermann Göring had promised the Führer that he would destroy the BEF encircled at Dunkirk, while the Panzer armies rested. The Luftwaffe pulled out all the stops, Oberleutnant Sepp Schlangenaugen and Leutnant Adolf Halland were in the vanguard in their Messerschmitt Bf 109 E-3s.

Schlangenaugen spotted a BEF convoy just outside of Dunkirk and both 109s dived towards them. The Spitfires, high up, spotted the Germans down below. 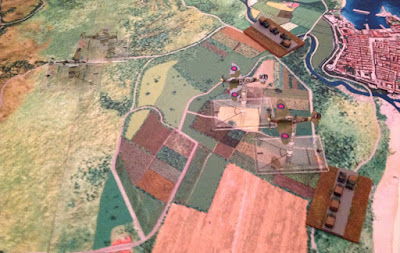 The cannon and machine-guns of the 109s devastated the lorries before the Spitfires could come to their rescue. Half Pint and Sir Price then dived down towards the Germans and a dogfight ensued. 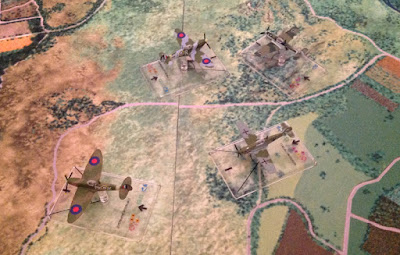 The two 109s made quick work of both Spitfires. Luckily they were still over BEF-held territory and could parachute to safety.

While hanging from his parachute, Half Pint decided he must have a serious chat with his fitter; Leading Aircraftman Walker. "It couldn't have been my own fault that I got shot down", thought Half Pint as he dangled in midair, "It must have been something that the useless Walker forgot to do".

Both Messerschmitts returned safely. Schlangenaugen and Halland celebrated their kills by each drinking a bottle of captured Champagne.