This is the ninth scenario in a Battle of Britain campaign that follows the exploits of the fictitious Country of Dampshire 369 Squadron Auxiliary Air Force. We use the Wings of Glory WW2 rules, slightly modified to give faster play, together with our own set of campaign rules. We use the Wings of Glory planes where the right model is available, other manufactures are used to fill in the gaps.

Westbound Convoy CW8 consisting of colliers and coasters was attacked by German Stukas. Of the 21 ships, only 2 got to their destination undamaged. This caused the Admiralty to stopped further daylight shipping from passing through the Straits of Dover.

Convoys were then timed so as to pass the straight at night; however the Germans installed a Freya radar on the Channel coast so even night-time convoys would prove too dangerous. 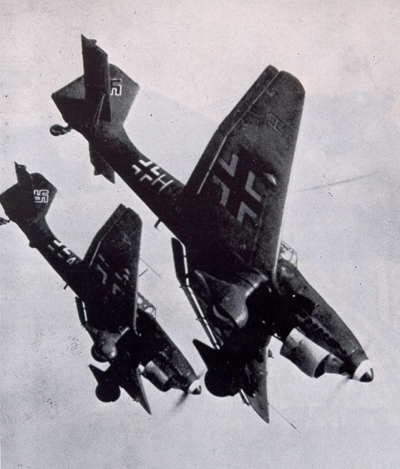 While waiting in the ready room sitting in an overstuffed armchair, Sir Price received a telephone call. Two weeks earlier he had been picked up from the cold Channel waters by a collier. Now the collier was going through the Dover straight again, and telephoned to to ask for a return favour. Please could Sir Price keep them safe from Jerry aircraft this time through.

Sir Price called to his pals Featherstonehaugh and Hollingberry. "Come on chaps", he exclaimed, "This collier saved my bacon, we must make sure he get through the Dover Straits safely". "Strange chappy that Sir Price", thought Featherstonehaugh as they raced towards their Spitfire Mk IIs, "He seems to always have bacon on his mind!". Hollingberry's Spit was having a tyre changed, so he jumped into a nearby Hurricane Mk II and chased after his friends.

German e-boats had been shadowing the convoy up the Channel and the Kriegsmarine alerted the Luftwaffe. At the airfield, within sight of the Channel, Oberleutnant Sepp Schlangenaugen and his men were scrambled. Schlangenaugen and Halland in their Messerschmitt Bf 109 E-4s as well as von und zu Missendorff and Stahlhelm in the Ju 87 B Stukas. Climbing steeply to gain height, they soon spotted the convoy.

Sir Price, Featherstonehaugh and Hollingberry had arrived just in the nick of time. As they crossed over the cliffs the saw the convoy and just a few seconds later Hollingberry spotted the Huns. 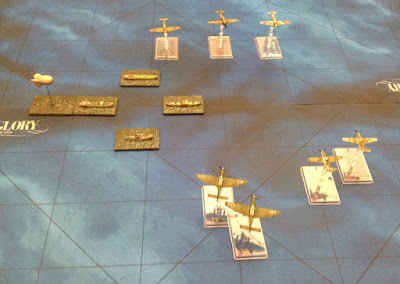 Led by Sir Price, the RAF used their speed advantage over the Stukas and raced to the convoy's protection. They arrived at the convoy first and opened fire on the Stukas. The Stukas were damaged but could continue with their bombing run as the two 109 turned in and distracted the British. 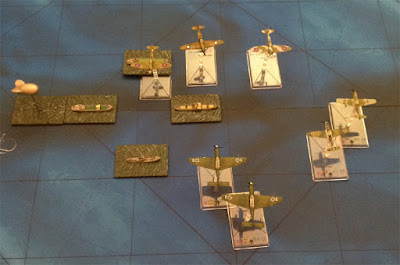 The two Stukas concentrated on the lead ship, both scoring direct hits, sinking the collier. Slowly pulling out of its dive, Missendorff's Stuka was hit by AA machine-gun fire from the convoy. He ditched his plan and they both took to their rubber dinghy. 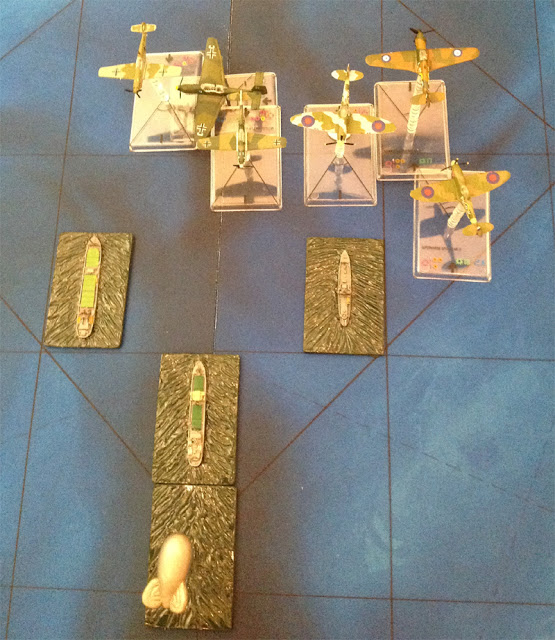 A swirking dogfight broke out among the fighters.

Stalhelm's Stuka was also hit by AA from the convoy and caught fire. Stalhelm turned for home with Cholmondeley on his tail firing wildly. Distracted by the tailing Spit and by the flames coming from his own engine, Stalhelm hit the barrage balloon cable and lost his port wingtip. His plane was un-flyable but luckily for him, in the narrow Straits of Dover, the beach was nearby and he managed to nurse his Stuka for a few more seconds until he could crash land on the beach. However he was so seriously hurt that he would never fly again. 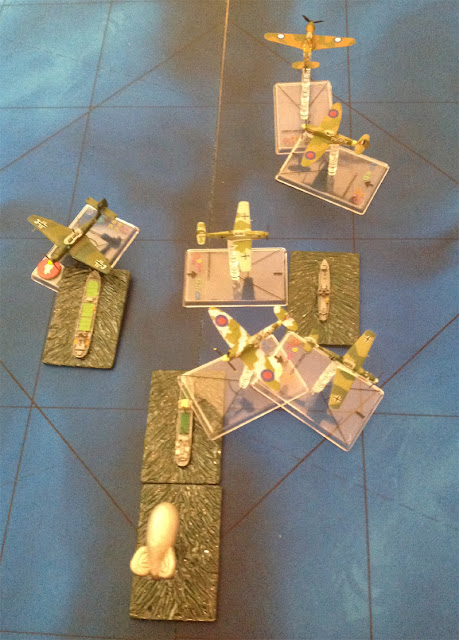 A swirking dogfight continued and Schlangenaugen, the skillfull Ace that he was, shot down Sir Price's Spitfire who once again ditched in the cold sea. In what was now becoming a habit, Sir Price was yet again plucked out of the Channel by his friends of the Merchant Navy. 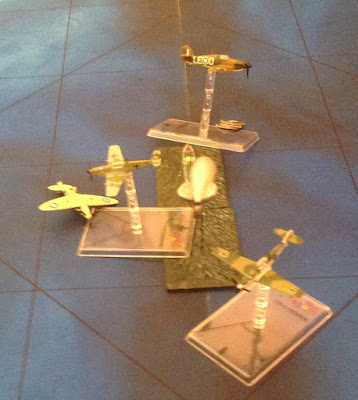 With one ship sinking, but both Stukas down, Schlangenaugen and Halland decided to head for home; there was no point in circling above the convoy which was taking pot-shots with their AA machine-guns.

When he was over the coast, Schlangenaugen noticed a Hurricane chasing after him. So waiting for the right moment, he turned on his pursuer and with a well placed cannon shot set Hollingberry's Hurricane on fire. A lucky shot from Hollingberry in his flaming Hurricane caused Schlangenaugen's 109 to give up and he had to make a forced landing on the beach.

Hollingberry himself ditched in the channel, which was one way to put out the flames, but he was seriously injured in the process. He would be out of the war for a time, needing to rest and recover. While convalescing, he visited a tea-room in the nearby town of Bramley End where he met an attractive waitress. When hearing about his fight with Jerry, she gave him a silver cigarette case which he keeps in his breast pocket over his heart.

The ship models are Hallmark 1:1200 sold by Magister Militum. The barrage balloon was scratch built from modelling clay.