The party returned to the King’s Road Inn after having checked in at Albin’s Armoury to see how their new chain mail was coming alone. The barkeep told them "Your kobold is in deep trouble. He had been caught stealing cherry tarts by the watch at the bazaar. They were going to lock him up straight away but he told them that he was staying here, so they brought him here instead. The Mistress paid the fine and now he must work off his debt which will take years."

Kranoval discussed this with the Mistress who agreed to let him buy back the kobold for 5 gp, but only if the party also did her a favour. She explained "Recently the King’s has been having problems with rats in the cellars. Never happen before. Just started. If you can track down the source of the problem, then we’ll call it quits."

The Mistress and the Barkeep took the party down into the King's cellars and there they showed the party a locked and bolted trap door leading into the sewers. Belwina the ranger spotted some rat tracks, so down the party went (all except Kobbe who was working off his fine cleaning the Mistress' stable).

The sewers were 15 ft wide with a 5 ft walkway down each side. They party was certain that it would be unlucky for anyone to fall into the green florescent liquid flowing through the sewer.

They met a carrion crawler which attacked and paralysed Belwina. Gimlit pulled the ranger out of his way and attacked hacked into the monster with his battle axe, soon making mincemeat of it.

When Belwina had recovered from the paralysis, the party continued, but this time with Gimlit at the fore and Wildbladder the hindmost. The party came to a rickety bridge made of two old rotten planks. Gimlit led the way over without incident. 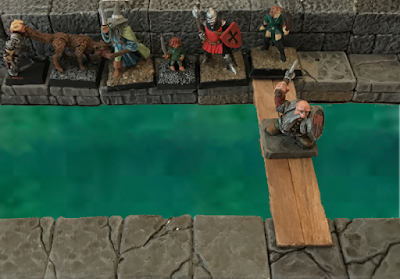 The rat tracks turned into the wall which Gimlit spotted was a rather poorly concealed secret door in the stonework. The party rushed in. The room contained a nest of normal sized rat which immediately scurried away into the corners squeaking loudly.

"They are too small to make those tracks", explained Belwina. 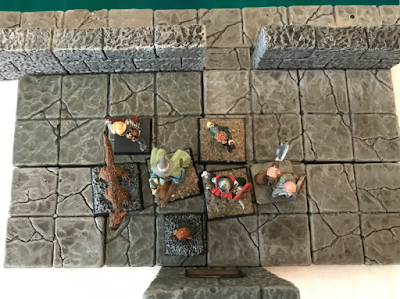 Frito picked the lock and the party continued onward.

Through the door the next room contained 10 Giant Rats and one Monstrously Huge Giant Rat. Seizing the initiative, Kranoval cast his sleep spell and the giant rats slept, all except the Monstrously Huge one which attacked Gimlit. Gimlit with the help of Wildbladder, Bathenwells and Fido did for the lone rat. 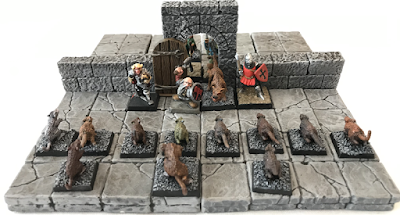 Not wasting a second, the party kicked down the next door and rushed in. There they found 8 ratmen, ready and waiting, having heard the fight in the previous room. A bitter fight ensued with Wildbladder critically hitting and killing one ratman. This gave Kranoval the chance to flank the ratmen and fire off his wand of lightning. The lightning bolt flew down the line of ratmen killing 6 of the 7 remaining. Fido with some help from Gimlit, finished off the last one. 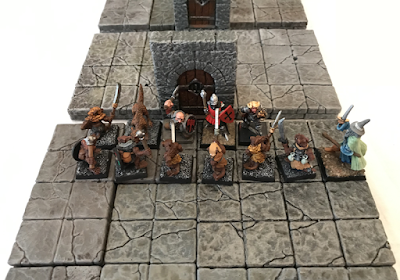 Again, not wasting a second to search the room, the party approached the next door. Frito picked the lock and sneaked in.

The room was 65 ft  x 25 ft with a pentagram engraved on the floor. In the middle of the pentagram was a small golden statue of a fat man pulsating with a red glow. Two golden braziers lit the room. Two demons stood in the far corners.

Frito sneaked behind the golden statue and back-stabbed it. Stabbing the statue gave Frito a nasty wound, he knew immediately that the statue was evil. Belwina shot at the statue with her long bow, missed and hit Frito who was standing directly behind.

Bathenwells rushed forward and poured Holy Water over the statue which neutralised the pulsating red glow.

The fight with the demons was bitter. Gimlit and Wildbladder took on one demon while Bathenwells and Frito fought the other. Belwina used her magic arrows to aid the party and Kranoval fired off some Magic Missiles.

One demon used a dagger which when it hit Bathenwells burst into flames and burned him nastily. 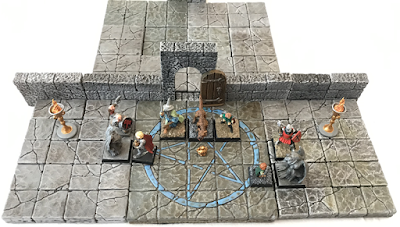 The party searched the room but found nothing else of interest. They picked up the small golden statue of a fat man which was no longer pulsating, the put out the two braziers which a quick examination from Frito resulted in an estimation of 200 gp the pair. Frito quickly pocketed the Hellfire Dagger.

Having destroyed the rats' nest and the evil behind it, the party decided to head back to the King's for a well deserved meal and a night's rest. However on the way back, when Gimlit was crossing the bridge a Shadow appeared out of the darkness and attacked him. When the shadow hit him, Gimlit felt his strength drain out of him.

The Bishop of Bathenwells didn't like the look of this at all, he jumped onto the rickety bridge behind Gimlit, pulled out his Holy Symbol and cried out "Flee before the power of LAW, foul undead thing of Chaos!". The shadow turned away and fled allowing the party to cross the bridge with no more trouble. 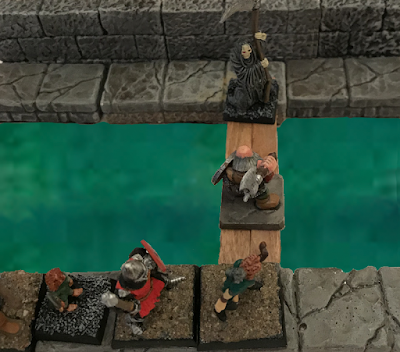 The party returned safely to the King's Inn where the gave Kobbe the good news that he was now a free kobold again. Kranoval promised to give him 1 sp a day (in addition to any board and lodgings) so that he would never need to steal cheery tarts again (and hopefully serve Kranoval well).

Frito took the gold braziers to the bazaar and came back with 200 gp in cash.

The Bishop of Bathenwells took the small golden statue of a fat man to the Temple of Freya where he had been worshipping and obtaining Holy Water. The High Priestess herself examined the statue and said it was very evil and she would take it, examine it carefully and destroy it. Pouring holy water on it had neutralised it but soon it would be back to its tricks again.

Bathenwells was still talking to the High Priestess when she noticed that thick hair had started to appear on Bathenwells’ hands. “That doesn’t look good”, she exclaimed, "I can't tell for sure, but come back tomorrow and show me your hands again!"