This is a dungeon crawl using dungeon tiles from DMB Games, map tiles from Red Dragon Gaming and the Swords and Wizardry “Old School D&D” rules.

The party are finally nearing the City. As they camp for the night they know that there is now only one day’s march to reach the city. They set up their tents, then feed and water the pony. Knowing that there will be fresh food in a good Inn tomorrow, they eat a hearty meal, using up most of their rations, leaving only enough for a quick breakfast. They agree on the night’s watch roster and then crawl into their tents.

They are awakened in the morning by a cry from Kranoval’s tent. He is in shock; his Wand of Lightning Bolts has disappeared during the night. Belwina searches around the tent and quickly notices fresh giant rat tracks.

Belwina, Kobbe, Fritto and Fido start following the tracks as the rest of the party breaks camp. A cry comes from St.John Wildbladder III; the purse with his gold is missing. Fritto soon returns and tells the party that Belwina is hot on the trail of the rats; her tracking skill and Fido’s nose will soon track them down.

The party leaves their camp and soon catches up with Belwina, Kobbe and Fido. 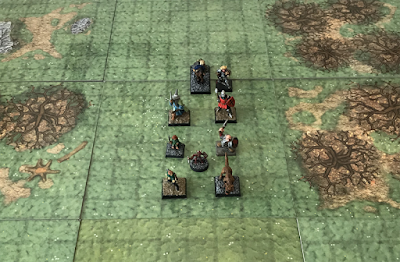 Belwina is concentrating so hard on tracking, she misses the 4 Stirges that swoop down and surprise the party. 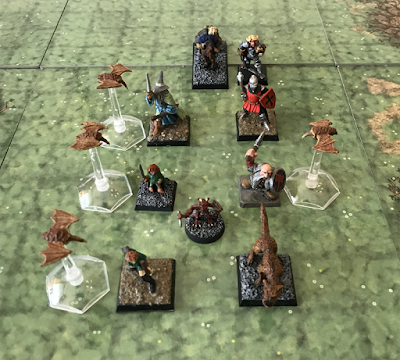 After another hour’s tracking the party comes upon a rocky ledge with a small cave entrance into which Belwina and Fido are sure the rats entered. 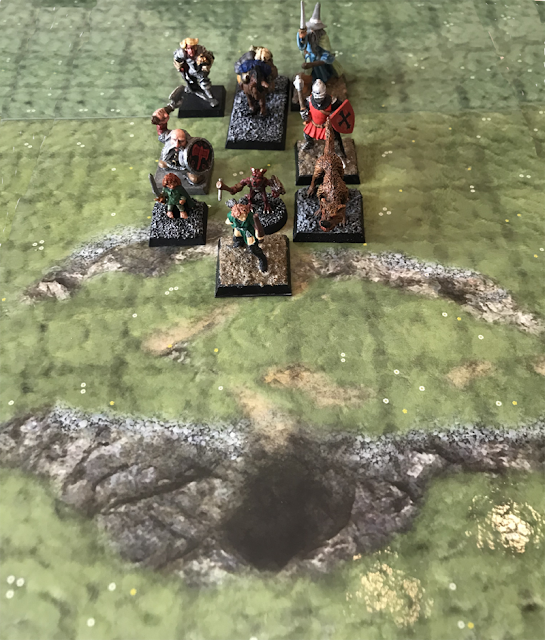 The party enter the cave with Fritto the thief leading. At the back of the cave they find a passageway extending into the hillside. It could be an old mine. 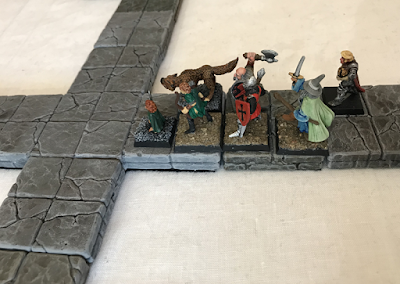 The party turns left, follows the passage and as it turns right the see a rats nest before them containing 12 Giant Rats and 1 Monstrously Huge Rat. 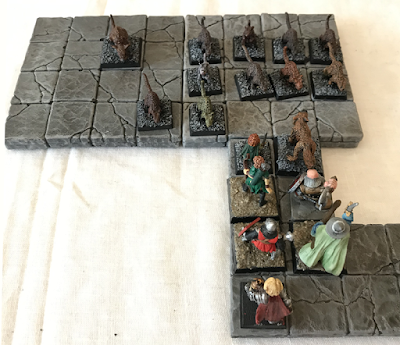 They party had killed most of the rats in the next, when another swarm of rats approached from behind. Gimlit with his trusty rushed to the rear of the party and chopped the rat swarm into small pieces. 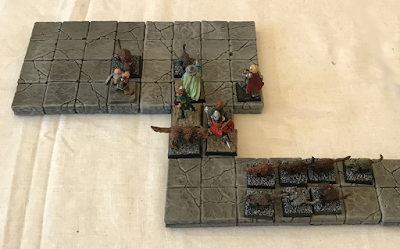 Having discovered that the right hand passage went to another rats nest, now deserted, the party took the remaining passage. It came to a dead end but the dwarf's stone-working expertise showed him that there was a poorly concealed secret door there. 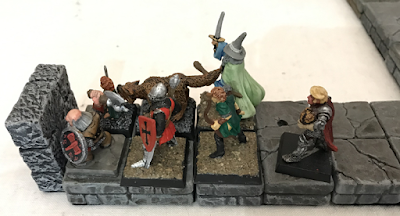 Forgetting to ask Fritto to check for traps, the Gimlit opened the door and got pricked by a hidden poisonous needle. Gimlit fell unconscious! The rest of the party jumped over him and rushed into the room behind the door.

There ther found 3 wererats waiting. Forgetting at first that only magic or silver weapons damage wererats the party attacked. It was a hard fight, especially without Gimlit. There was some panic looking for the party's silver dagger until someone worked out that it was under Gimlit's prostate body.

Although he didn't have a magic mace, the Bishop of Bathenwells bravely bashed a wererat repeatedly over the head. The wererat was tenacious and Bathenwells received a nasty wound. 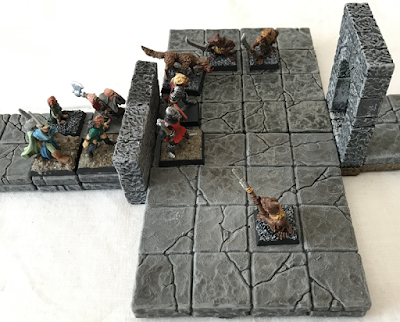 The Bishop of Bathenwells went back to try and revive Gimlit which was successful.

Hearing the fighting, the Master Thief Wererat Touché appeared and opened fire with his crossbow.

It was a close run thing, but with Gimlit's Magic Axe, Wildbladder's Magic Bastard Sword and Fritto's Magic Short Sword it looked like the party was going to win.

But then it went pitch black. Darkness filled the whole area. Fighting stopped. 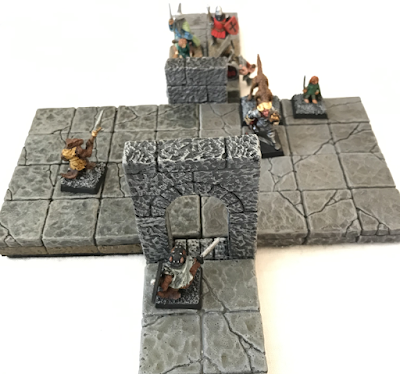 By the time Bathenwells came up with the idea that he could cast light to dispel the darkness, the wounded Master Thief Wererat Touché had disappeared.

Fritto picked the lock and entered the next room carefully. I was the Master Thief's quarters. Looks to me like there's a wand, a purse and a map on the table he said. Kranoval and Wildbladder rushed in to grab their items. there was also a chest which Fritto opened carefully and inside he found the thief's swag: including bags of gold, six gold signet rings, a silver candelabra, a scroll, and potion. 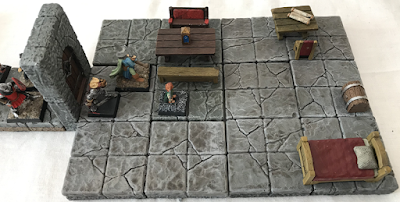 Master Thief Wererat Touché had escaped so the party searches for and finds the secret door that led to his emergency exit. Touché had got away but he was not at all happy with the day's outcome.

Too much of the day has passed for the party to be able to reach the city. However as they near the city they see a number of farms surrounded by cultivated fields. As darkness falls they stop at a farm. The farmer and his wife offer to put them up in the barn and even feed them a good home-cooked stew for only 2 gp each.

The farmer wakes up the party just before dawn and they head for the city. As they approach the city gate they see a queue of farmers’ carts waiting to enter.  They pass by the “Roadside Inn”, just outside the gate, which appears to be full of Merchant caravans.

They enter the city and are immediately accosted by a young boy who offers to be your guide for only 2 gp and will even provide a visitor's map for the same price. After a short tour the guide takes them to the King's Road Inn where they book rooms for one week.

The next day some of the party go to Albin's Armoury to order chain mail. Wildbladder is offered special paladin mail which has every fourth ring plated with silver so it shines. Bathenwells goes to Freya's temple to prey and replenish his stock of holy water. Kranoval goes to Madame Jacquezel's where he orders an elaborately decorated robe with matching hat.

Kobbe has no money, not even a copper, so he goes to the bazaar to try and steal a cherry tart.