This is a dungeon crawl using dungeon tiles from DMB Games, map tiles from Red Dragon Gaming and the Swords and Wizardry “Old School D&D” rules.

The Bishop of Bathenwells was talking to the High Priestess when she noticed that thick hair had started to appear on his hands. “That doesn’t look good”, she exclaimed, "I can't tell for sure, but come back tomorrow and show me your hands again!"

When he returned the next day, the High Priestess explained “It looks like the start of Lycanthropy! You haven’t been near any were creatures lately?” Bathenwells told the story about the fight with the wererats. “Don’t worry” said the High Priestess, “I can fix it, it needs both a Remove Curse and a Cure Disease, but it will take me some time to get everything ready”.

“But I will need a favour from you. We have an acolyte who is annoying, he thinks he’s God and he wants to be the next High Priestess, so I have decided to send him away to another diocese. It’s an old keep a week’s travel away. The problem is that it is full of goblins. If you can clear it out for me, I will be able to get rid of the nasty little acolyte and I’ll be ready to cure your Lycanthropy when you get back”.

The High Priestess gave Bathenwells a map showing the route to take.

The party had a slap up meal at the King's Road Inn followed by a good night's sleep. The packed their tents and supplies onto their trusty pony and set out along the road shown on the map.

When the party was less than one day's travel from the keep, they were ambushed by Goblin Squid riders. 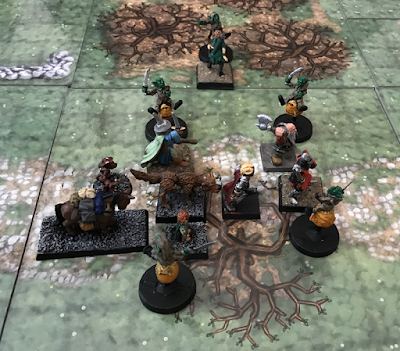 The party killed the ambushers but were badly shaken up, so they decided to camp for the night and recuperate. The next morning the carefully approached the keep.


The keep was a 50 ft high and  50 ft square tower. It had a large reinforced double door and the walls are pierced with arrow slits. On the top of the tower there were battlements with crenellations behind which they could see a small glow. Occasionally the party noticed a small Goblin head or two peek out between the crenellations. 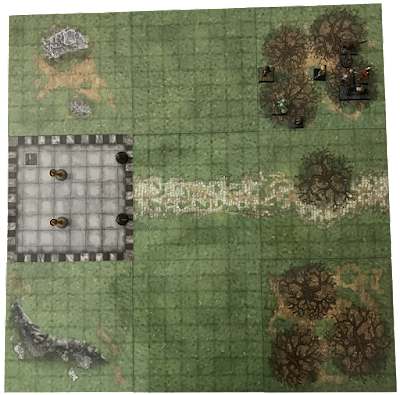 Kranoval used a Charm Person spell to charm one of the Goblins on the Battlements and the sent his down to open the door to the keep. When the Goblin opened the door, the party left cover and rushed towards the keep. 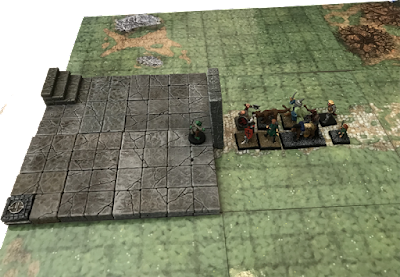 The party made it inside without any problems.


They looked around the ground floor which was mostly empty. The floor was stone and strewn with hay. There was a flight of stairs going up in one corner and in the other a trapdoor which was both bared and bolted. 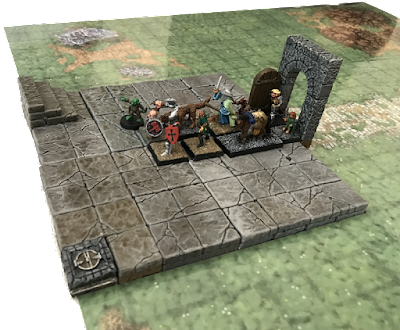 The party rushed up the stairs to be met by a band of 10 Goblins. Gimlit left a swathe of destruction in is wake with his battleaxe. The room was dimly lit from the arrow slits in the walls. A flight of stairs went up to the next level. 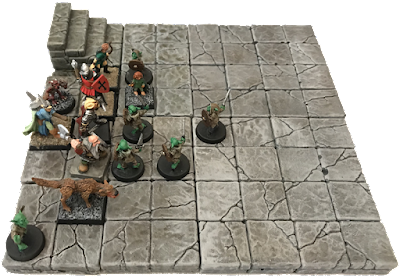 Having defeated the Goblins, the party rushed up the stairs to the next level without stopping to search the room.

The party was led up to the next floor by Gimlit, Bathenwells, Wildbladder and Fido where they encountered a band of 8 Orcs with a leader wielding a nasty meat cleaver in each hand. Having heard the fighting below, the Orcs were ready and closed in on the party as soon as their heads appeared up the stairs.

The Orcs put up a touch fight, but couldn't stop the party. Without delay, the party then rushed up the next flight of stairs. 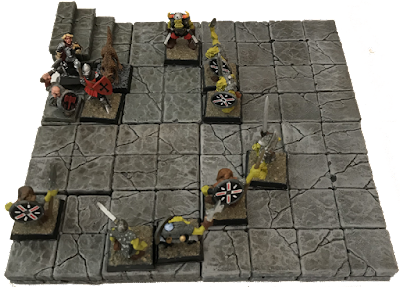 The party was yet again led up to the next floor by Gimlit, Bathenwells, Wildbladder and Fido. Here they encountered 2 Trolls with their 4 pet Stirges. Having heard the fighting below, they were ready and closed in on the party as soon as their heads appeared up the stairs. 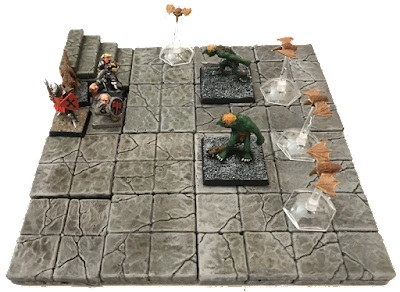 Having defeated the Trolls, the party searched the room. Of interest was a small chest which was found to contain assorted gems to the value of 200 gp and a candelabra worth 100 gp which was lighting the room.

The staircase in the room led up to a trapdoor leading to the battlements. The lone remaining Goblin their had disappeared. So the party returned to the ground floor, barricaded the entrance door and camped for the night.

In the morning the were shocked to see the two Trolls descending the staircase. "Damn", said both Wildbladder and Bathenwells simultaneously, "we forgot to burn the bodies".

A brutal fight ensued and the Trolls were killed for a second time. They were hastily burnt before they could regenerate again. The party rested for another day, licking their wounds. 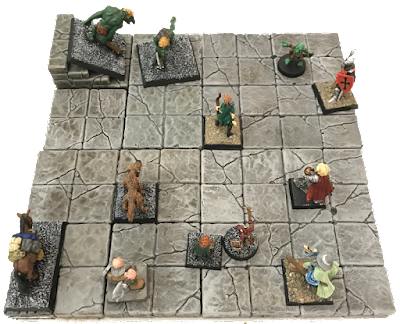 The next morning the party awoke to find their "charmed" goblin had departed. They decided that the locked and barred trapdoor was too tempting to ignore, so it was unlocked, unbarred and opened. Below the trapdoor was a flight of stairs descending into darkness. The party went down and came to a cross-roads; each of the four passageways ended in a door. 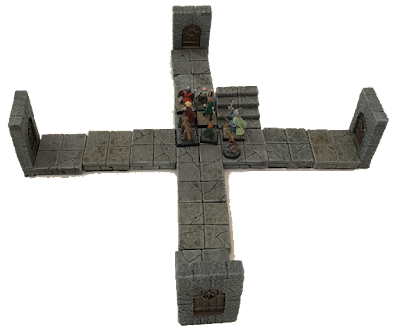 The party arrived at the locked door, Gimlit and Bathenwells in the lead. Gimlit kicked the door but it didn't open. A few more attempts and the door flew open. They were greeted by a bunch of unsurprised Ghouls.

As the Ghouls rushed towards them, the Bishop of Bathenwells pulled out his Holy Symbol and cried out "Flee before the power of LAW, foul undead thing of Chaos!". The ghouls turned away and fled. 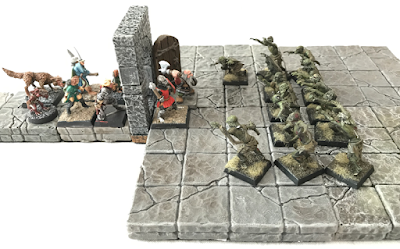 Two Ghouls remained, ignoring Bathenwells and his raised Holy Symbol, they charged at Gimlit who chopped them into bits with his battleaxe. 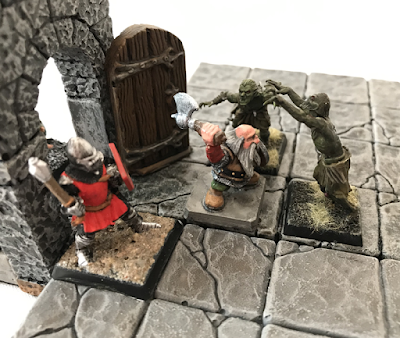 Having chopped the two active Ghouls, Gimlit and Bathenwells backed out of the room locking the door behind them. One down, three to go said Gimlit as they marched towards the next door. Gimlit was getting the hang of this door-kicking business, and it opened easier this time. They were met by two Shadows. Bathenwells pulled out his Holy Symbol again and cried out "Flee before the power of LAW, foul undead thing of Chaos!". The shadows turned away and fled. See nothing of interest in the room, Gimlit and Bathenwells backed out and slammed shut the door. 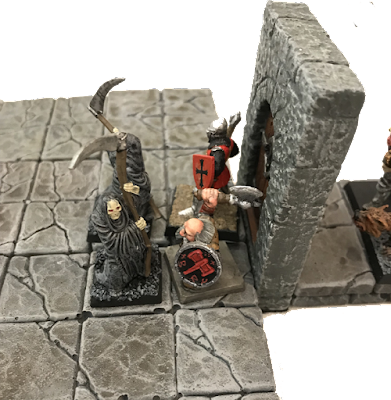 Two down, two to go said Gimlit as they marched towards the next door. Again Gimlits boot did service as a key, and the party charged in. The room contained a sarcophagus, rising out of which was a Wight. Bathenwells pulled out his Holy Symbol yet again and cried out "Flee before the power of LAW, foul undead thing of Chaos!".  Much to his astonishment, nothing happened except that the Wight charged towards him.

Gimlit, Bathanwells, Fritto and Wildbladder fought the Wight, the rest of the party are outside behind a closed door! When the Wight was defeated, the sarcophagus was searched and found to contain two parchment scrolls; one containing the cleric spell Bless and the other a map of an island showing a temple. 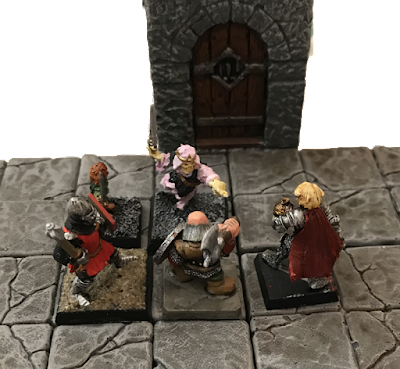 Last door said Gimlit as they marched towards the fourth and final door. Through the door they found an empty room with an open secret door leading to a narrow passageway that in disappeared into the distance. They followed the passage way until it emerged in a wooded copse.

The copse was the lair of 2 Aranea who attacked the party. They both used mirror image so the party thought they were fighting 6 Giant Spiders. 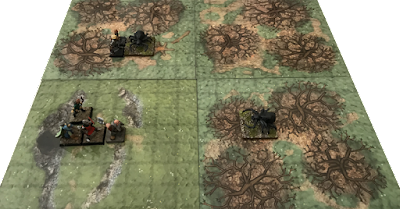 One Aranea succeeded in "webbing" Gimlit and then gave him a nasty bite while he was entangled. He was out of the fight be the rest of the party fought bravely and the Aranea were defeated, but the party was badly wounded. 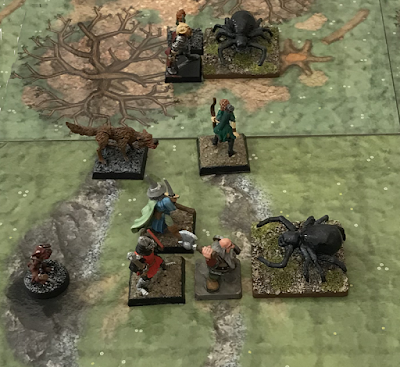 The party returned through the tunnel to the keep, there to lick their wounds. They went up to the ground floor, locking and barring the trapdoor behind them. They rested there in safety for the remainder of the day and camped there for the night.

The next day the set out on the road, for the one week journey back to the city. They arrived back without incident and checked back into the King's Road Inn. The next day the party, all except Bathenwells, went to the bazaar to exchange the candelabra for some ready cash. After the bazaar Gimlit and Wildbladder went to Albin's Armoury for the final fitting of their chain mail which they picked up the next day.

Bathenwells went to the Temple of Freya where he met the High Priestess. He was given a monk's cell to rest and recuperate in for a week. With good food, lots of temple-brewed beer, prayer and two spells cast by the High Priestess, Bathenwells was cured of his putative Lycanthropy and right as rain by the end of the week. He was even able to take part in the feast for the acolyte who was leaving for the keep with two layman followers.