Caesar's Invasion of Britain (55 BC)

Previously we have been playing Commands & Colors Ancients with Baccus 6mm models. However we didn't have enough Ancient British models so we played this scenario with paper cut-out flats by Peter Dennis and Helion Publishing.

This is planned to be the first scenario of three games played in Caesar's campaign in Britain. We will be testing our house rules and our campaign ideas.

With most of Gaul under his control, Julius Caesar saw a need to pacify the nearby British coast, lest this island serve as a sanctuary and base for anti-Roman Gauls. Caesar sailed to Britain late in the campaign season with only two legions. The intended landing sight, above the cliffs of Dover, was lined with warriors, which forced Caesar to sail further north. The British cavalry and chariots kept pace with the fleet, however, and when the ships landed between Walmer and Deal, the Britons were waiting. The heavily laden Roman troops could only land by jumping into the sea and wading ashore. Wild melees ensued all along the beach and only after a number of cohorts gained dry land, following the lead of the Tenth Legion, did they form up and charge. This attack finally drove the Britons from the beach. Without cavalry, because his cavalry transports never arrived, Caesar was not able to turn the retreat into a rout. News spread of the Roman victory and tribal chiefs appeared before Caesar to offer submission. Unfortunately, a violent storm shattered the unprotected Roman fleet, and Caesar was forced to return to Gaul before he could exploit the fruits of this first invasion. 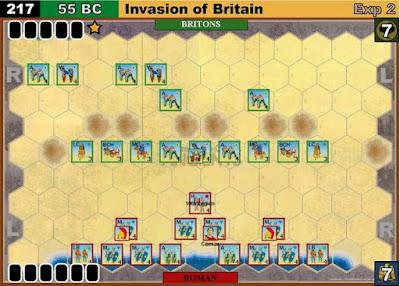 The Romans have just landed and are struggling ashore. They are led by the elite 10th Legion and Julius Caesar is in command.


The British have been watching the landing and now attack. They move first in this scenario.

The British decided it was best to attack before the Roman's while they had nowhere to retreat to. The alternative of withdrawing to the hills and forming a defensive line did not seem attractive. So their leader ordered all units within range to charge the leading Roman unit: the prima cohors of Legio X Equestris. 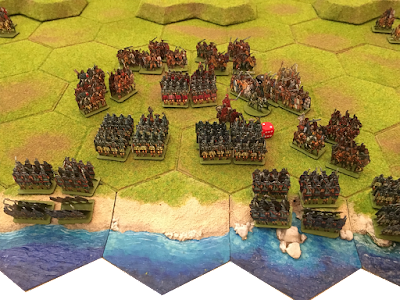 The prima cohors of Legio X Equestris was wiped out, but the British took heavy casualties and all their remaining units retreated except for the light cavalry. It was a young British rider that stabbed the aquilifer carrying the legion's standard and then rode back to the safety waving the eagle above his head. 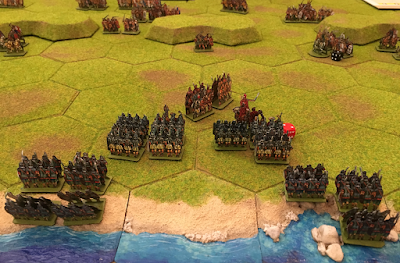 Caesar was intent on revenging the 10th and charged forward with the supporting legionaries from the Legio VII. 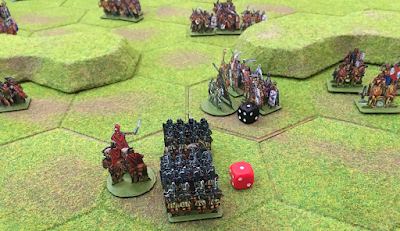 Caesar's other units moved up from the shore onto firm land.

Caesar wiped out the offending infantry and killed its leader. Realizing he was too far in advanced of the rest of his army, Caesar refrained from following up his victory. While this was happening, the legionaries in the rear attacked the audacious British cavalry, a small portion of which managed to flee. 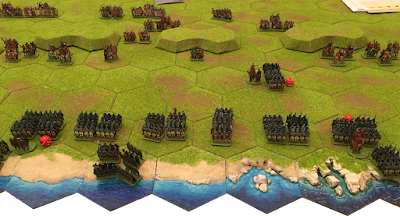 The chariots and light cavalry protecting the British left wing now charged the Roman light infantry which was still struggling to get onto dry land. 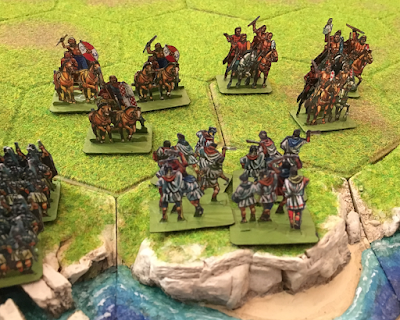 The tenacious Roman light infantry lost half their strength but successfully protected the army's right flank, causing the British chariots to retreat and inflicting losses on the supporting light cavalry. 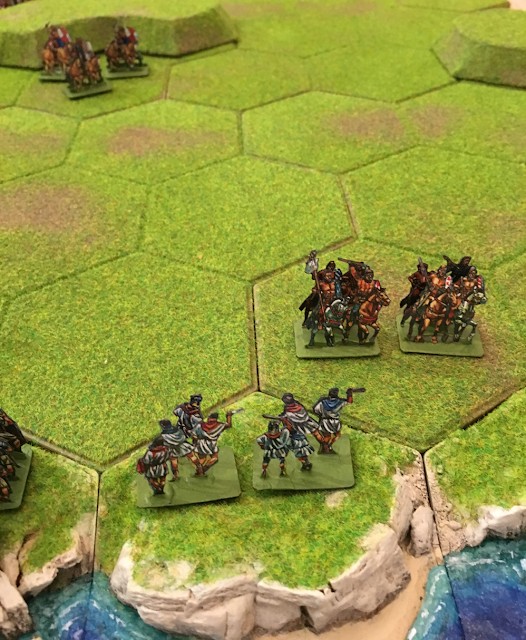 In the centre, Caesar advanced with two units of legionaries, planning to mop up the lone British infantry. 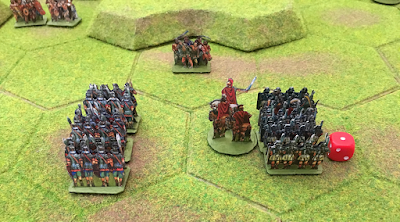 On the Roman right flank, the legionaries advanced to protect the retiring light infantry. 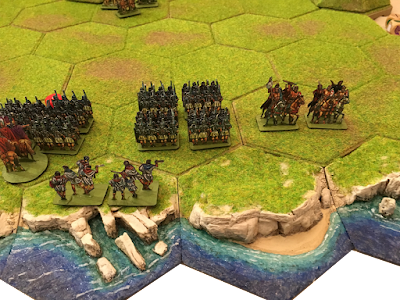 Caesar wiped out the opposing infantry. The British cavalry on the flank evaded the legionaries and retreated back onto the supporting chariots but lost half its strength in doing so. 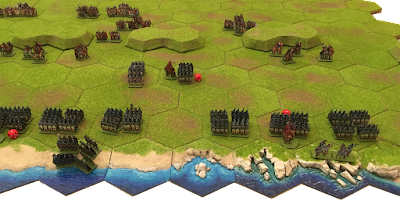 The British leader brought forward his chariots on his right wing and the Roman left wing advanced to meet them. 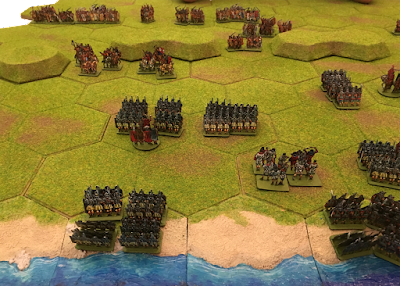 However the British chariots swept past the first legionaries in order to attacked a legionary unit still struggling to reach dry land. 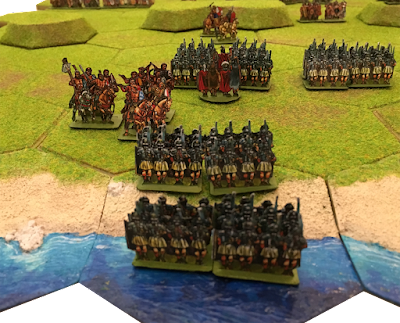 The attacking chariots caused some losses to the legionaries but took many more casualties themselves. 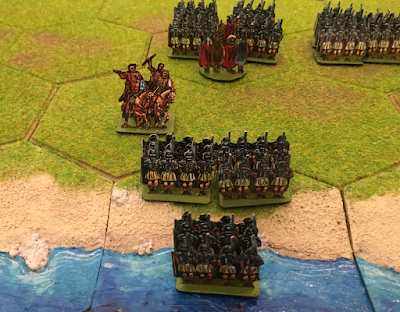 The British formed a new defensive line on the ridge, and Caesar then advanced to attack. 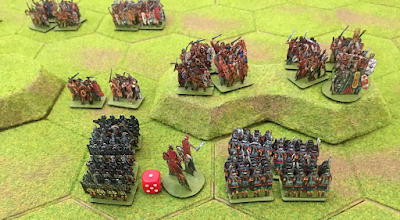 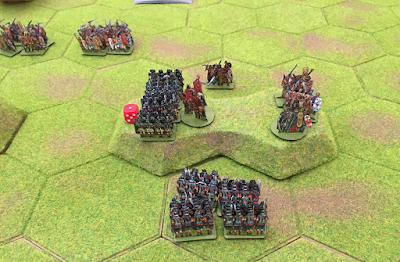 The battle was now won and the remaining British troops retreated from the coast and took up positions behind the River Stour.

Caesar was so pleased with his leading legionary unit, that he awarded them a laurel wreath to carry on their standard. They will now count as heroic for the next battle in the campaign.


Although the British had lost heavily and retreated from the field of battle, there was great celebration that night when the young British cavalryman presented the captured eagle standard to the tribal leaders and their druid. The light cavalry that captured the eagle will now count as heroic for the next battle in the campaign. 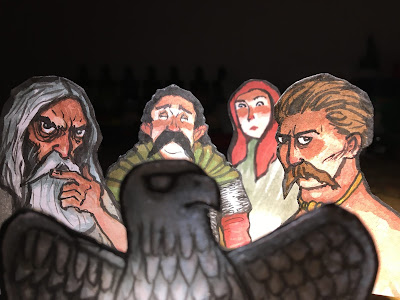