We have been playing a lot of of WW2 Wings of Glory so just for a change I brought out a WW1 balloon and the original Wings of War starter set. Great fun getting these old planes on the tabletop again.

You are woken up by a sharp knock on the door, and your batman rushing in with a mug of scolding hot sweet tea. Sorry Sir, he shouts, you’ve gotta get up, the CO’s having a fit, there’s a briefing in the Officers’ Mess in 10 minutes. You gulp down the tea, burning your lips in the process, while hastily donning your uniform.

You rush into the corridor, while still doing up your trousers and arrive in the Mess hall just as the Intelligence Officer ‘Daddy’ Wilson taps the blackboard with his swagger stick. “What ho chaps. We have a sticky one for you this time”, he says, “69 squadron led by ‘Jack’ Russell had a go at it yesterday afternoon, but with no success at all. Now’s our chance to show the Hun a thing or two, and take 69 squadron down a peg or two at the same time”.

Tapping the map drawn on the blackboard a few more times ‘Daddy’ continues, “Pay attention now chaps, we have a push coming soon around here, and we will be bringing up tanks to support it. The dastardly Hun has been using an observation balloon to spot for the artillery firing on our reserves marching up to the front. It would be disastrous if they catch sight of the tanks moving up and even worse if the can target them with accurate heavy artillery fire. We must shoot down that balloon!” 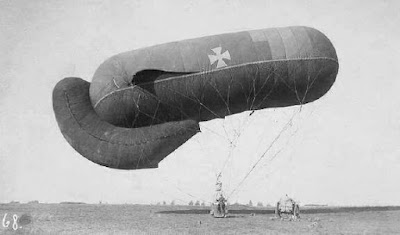 “As I’m sure you are aware, the Hun will start winching down the balloon just as soon as he sees us, so we have to get in fast. It’s damned unsporting to shoot a balloon once it’s on the ground, not cricket at all, I mean, not even the Huns do it!”.  “The other thing is that 69 squadron’s visit yesterday has probably stirred up a hornet’s nest. So we can expect the balloon to be protected both by scouts and Archie.”

Then he gives a little smile and says, ”But we have devised a cunning plan, we’ll send two scouts to shoot up their aerodrome at dawn while the other two will attack the balloon just as it’s gone up. You two will be the aerodrome mission”, and then pointing at you, “and you two get the glory of seeing the balloon go down in flames.”

“Take off will be in an hour, so go check your machines. And by the way, do you chaps remember that old Nieuport 16 at the back of the hanger? Not much of an aeroplane what, but it has the gubbins to fire those Froggy Le Prieur rockets. So if any of you want a go, it might make a nice fireworks display.”

The balloon-busting pilots went out to their aeroplanes, a Sopwith Camel and a Spad XIII. On the way they popped into the hanger but neither of them liked the look of the old Nieuport 16, even if it could have rockets fitted. A modern aeroplane and two reliable machine-guns were just what this job needed.

The two allied scouts headed straight for the balloon, wondering where the Hun defenses were. 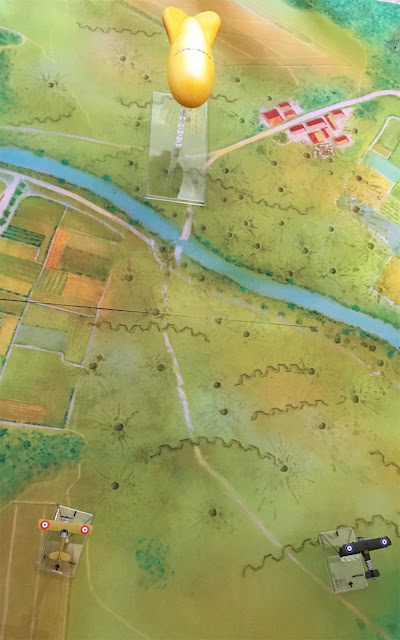 They did not wonder for long, soon two Hun scouts were spotted. At the same time the Huns started to winch down the balloon to safety. 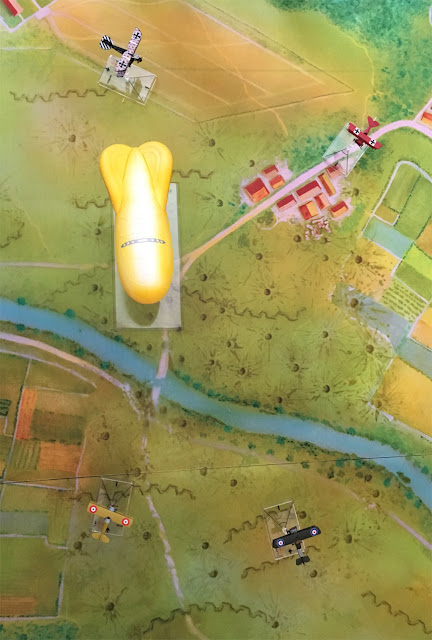 The allied scouts ignored the Huns and went straight at the balloon, opening fire at once. 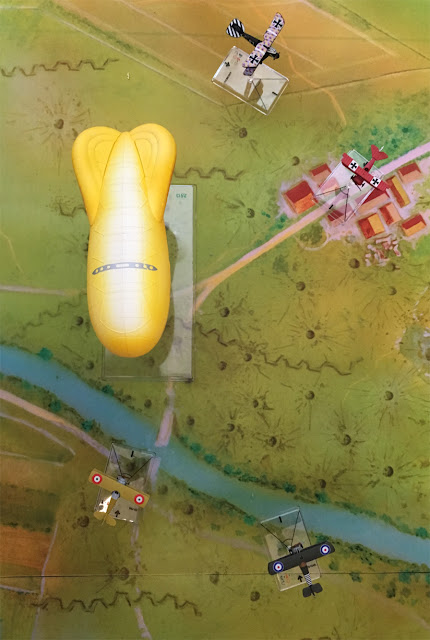 A lucky burst of fire from the Spad XIII caused the balloon to immediately catch fire. 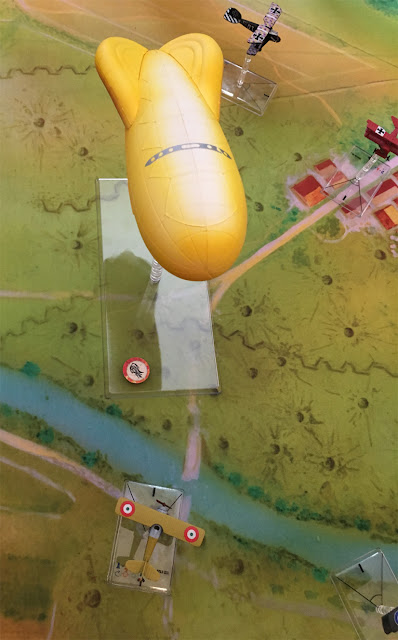 The next burst of fire from the Spad XIII caused a second fire to start at the other end of the balloon. The balloon was now as good as doomed. 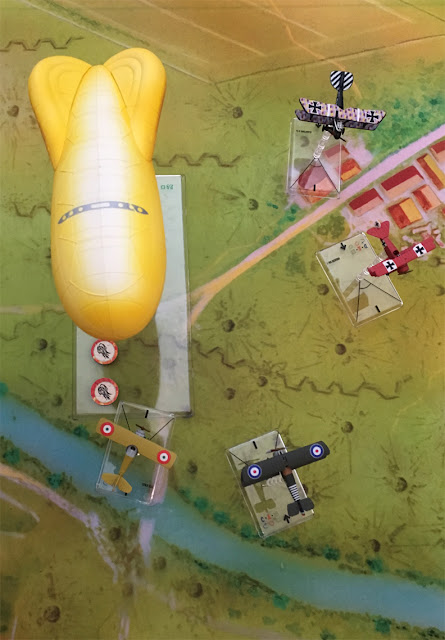 Now the Hun scouts attacked the allies, a dogfight in the shadow of the burning balloon. 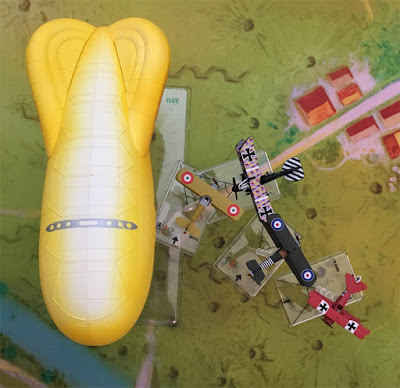 The aeroplanes shot past each other, the Albatross D.V missing the balloon cable by only a hairs breadth. 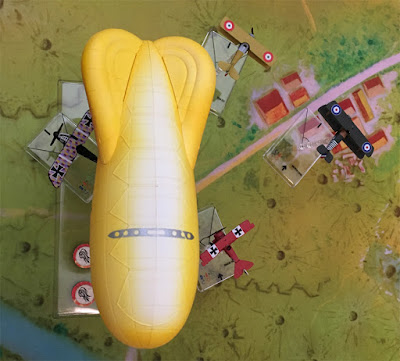 The Allies both performed Immelmann turns, somewhat to the surprise of the Hun in the Fokker Dr.1. The Albatross D.V was having rudder problems and zoomed straight ahead. 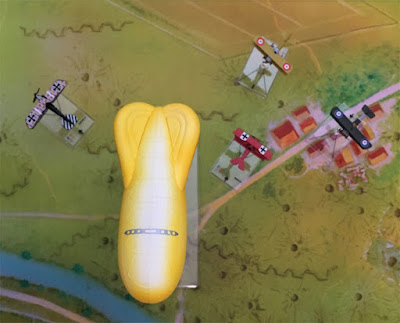 Both Allied scouts opened up on the Fokker Dr.1 and all 4 allied machine-guns immediately jammed. The Fokker however returned fire without problem. 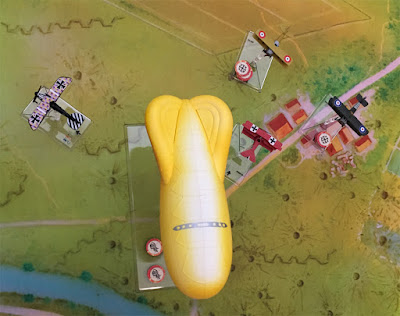 Even with rudder trouble, the Albatross D.V managed an Immelmann turn to return back into the fray. The Fokker Dr.1 turned tightly but failed to get on the Camel's tail.The two allied scouts headed straight at the balloon trying hard to unjam their machine-guns.

The Spad pilot was starting to wonder how clever it was to be this close to a burning balloon which could explode at any moment. 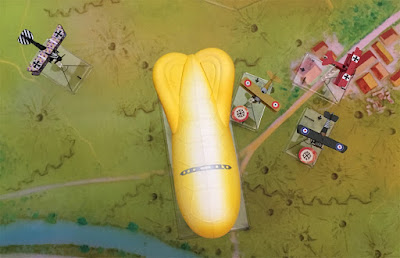 The allies were still trying to unjam their machine-guns. The Fokker Dr.1 got onto the tail of the Camel and gave him a nasty burst. The Albatros D.V came out from his Immelmann and opened up on the Spad XIII. 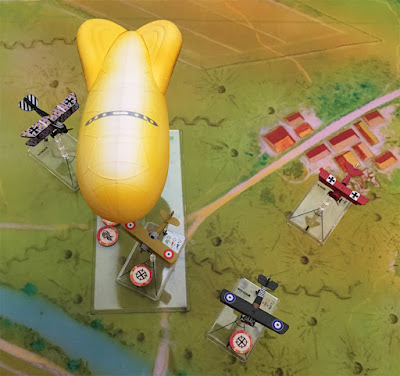 Now both allied scouts were in a bad position. Perhaps they should have been concentrating less on the balloon and more on the enemy scouts. 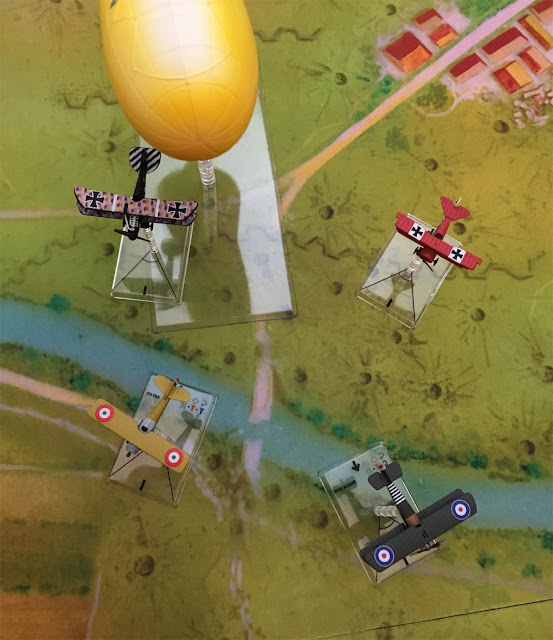 Another burst of fire from the Fokker Dr.1 and the Camel was done for. A lucky burst from the Albatross and two bullets went straight through the Spad XIII's pilots head killing him instantly. 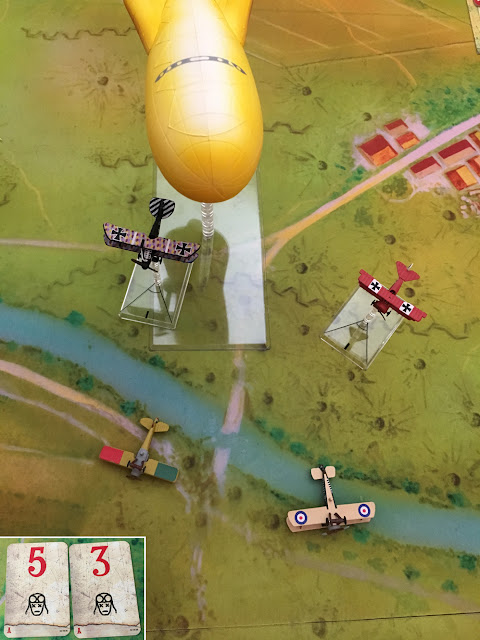 The Hun pilots claimed a victory, having shot down their two opponents and they celebrated with liberated French Champagne when they returned to their aerodrome.

The Allies had shot down the balloon which meant that they offensive was safe, the Huns won't know that the tanks are coming and there will be no accurate artillery fire. However there was no celebration in the Premier Escadrille International's Officers' Mess.