This is the fifth episode of a campaign representing fictitious battles in the air over the Western Front during the First World War. It was initially planned to use the Wings of Glory rules, but these were modified to use hex based movement in order to facilitate remote play over the Internet due to Corona restrictions.

A motorcycle messenger arrived at the aerodrome, not long after Major Brackton had departed flying the squadron’s only DH.4 in search of the County of Dampshire infantry regiment and the missing beer. He ran into the officers’ mess looking for Brackton.

The messenger had an urgent mission for the Premier Escadrille International. The Hun offensive at St Crupelle was gaining ground and the squadron was ordered to bomb the advancing German infantry. This caused great distress, Major Brackton had taken the squadron’s only DH.4 bomber and nobody knew when he was likely to return.

The French inspecteur général Hippolyte St Prix immediately grasped the chance to put Brackton down, so he told all the officers gathered in the mess that l'aviation militaire française would come to the aid of the squadron. He will supply a superb Bréguet BR 14 bomber for the squadron to use and an excellent SPAD XIII to escort it.

Charles “Half Pint” Carruthers and “Dirty” Bertie Parker offered to fly the BR 14 and Hank Snapmulder took the SPAD XIII.

The erks loaded the BR 14 with bombs, and then Half Pint and Snapmulder jumped in. There they found a nice surprise, the cockpit still contained a few bottles of 1897 vintage Côte de St Prix. As they taxied away from the hanger, Half Pint tossed one bottle to Corporal Boyd who had been responsible for arming the aircraft.

They climbed slowly to an altitude of 7,500 ft and when they were over the village of Saint-Benoît-du-Saucisse they turned toward the front line and St Crupelle. 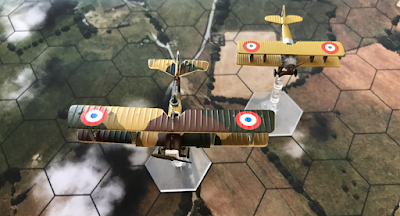 The Huns were slightly lower at an altitude of 7,000 ft. 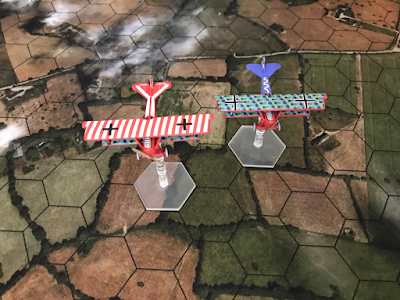 As they approached the front at St Crupelle, Half Pint spotted four German supply columns which looked like juicy targets. 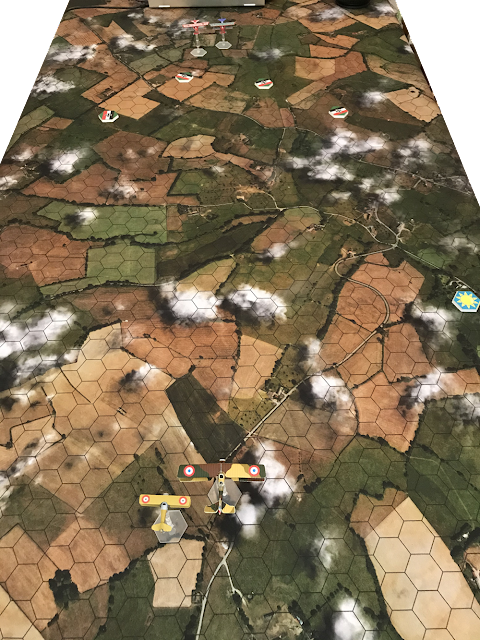 The Huns were now directly overhead of their supply columns. It was going to be tricky bombing the supply columns with the Hun Fokkers in the way. 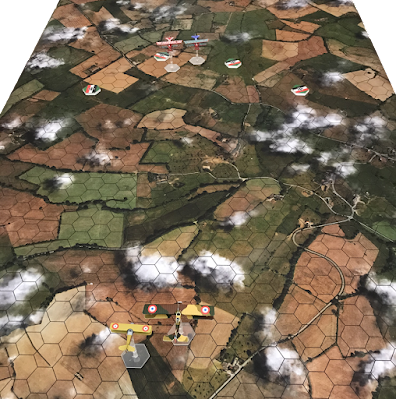 The Huns headed straight for the incoming bomber.

The BR 14 slipped to the right, hoping to avoid the Fokkers.

Snapmulder used the superior speed of his SPAD XIII to move protectively in front of the BR 14. 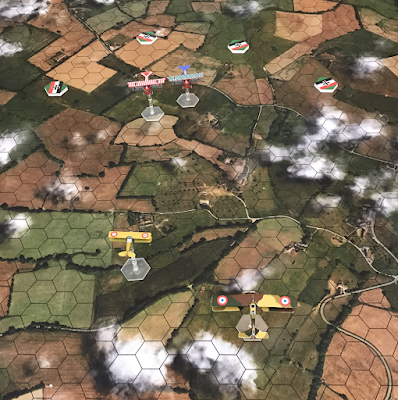 Half Pint performed a straight dive with the BR 14, hoping to pass safely under the Fokkers. Both Fokkers slipped left so as to meet the BR 14 head on. Snapmulder guessed correctly what the Fokkers would do, and turned in on them with perfect timing.

Both Fokkers opened fire on the BR 14 with their twin Spandau machine-guns as Half Pint returned the fire with his single Vickers machine-gun.

Snapmulder in the SPAD XIII opened fire on the a red and white striped D.VII flown by Freiherr Friedrich ”Dickie” von Salzbach. 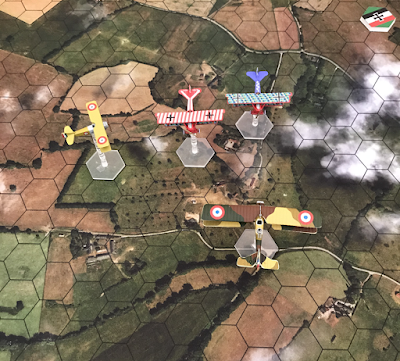 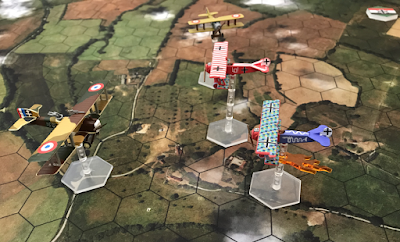 The rudder of von Salzbach's D.VII had jammed and he could only turn right and Snapmulder in the SPAD XIII followed him round. Half Pint and “Dirty” Bertie in the BR 14 continued straight ahead to get closer to the supply columns. The flaming speckled D.VII flown by Slobomir Kraijnc turned slowly left.

“Dirty” Bertie in the back seat of the BR 14 opened up with his twin Lewis guns on Kraijnc's D.VII and Snapmulder  in the SPAD XIII continued pouring bullets into the striped D.VII. 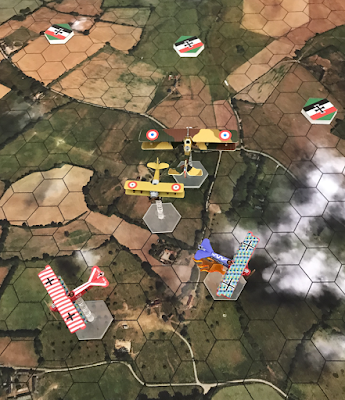 Half Pint turned the BR 14 right and headed for the first enemy supply column. Despite the flames shooting out from his engine of his speckled D.VII, Kraijnc turned to chase after Half Pint. Kraijnc opened fire on the BR 14 and “Dirty” Bertie in the back seat returned fire.

Von Salzbach turned his D.VII sharply left as Snapmulder closed in for a close range shot. 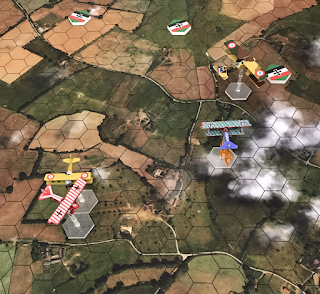 Snapmulder fired a long burst into von Salzbach's D.VII and it began to spin earthwards. Hank Snapmulder had his first kill. 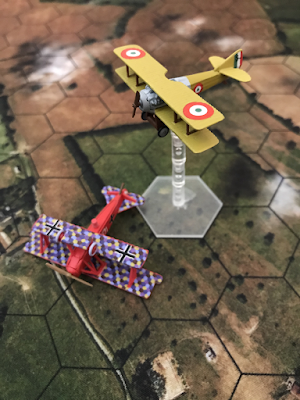 Half Pint flew the BR 14 over the enemy supply column and dropped his bombs.

With the flames still shooting out from his engine Kraijnc closed in on the BR14 and opened fire as the two-seater finished its bomb run.

Snapmulder turned to help the BR 14 fight off the D.VII. 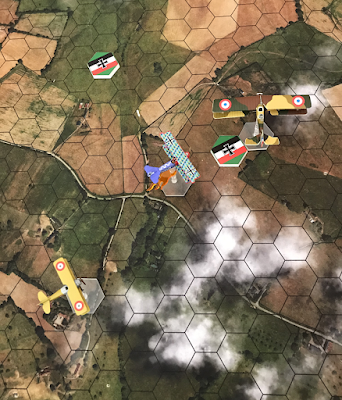 “Dirty” Bertie opened fire from the back seat of the BR 14 and Kraijnc's D.VII went down. 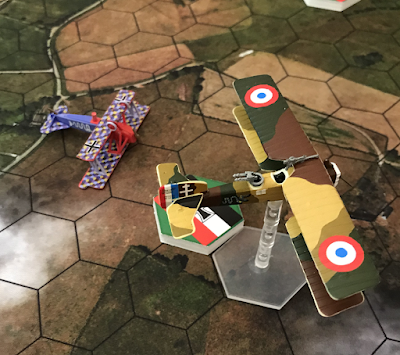 Slobomir Kraijnc's D.VII crashed into the ground, Kraijnc was scorched and wounded but survived the crash.

Freiherr Friedrich ”Dickie” von Salzbach just managed to exit the spin before crashing into the ground, he managed an emergency landing and escaped the ordeal without any serious wound.

Now unhindered by enemy aircraft, Half Pint and “Dirty” Bertie continued to bomb the supply columns until their supply of 8 kg bombs ran out, when the head home.

Snapmulder in the SPAD XIII circled protectively nearby, in case any Huns should show up.